What did we do before the cauliflower revolution? While I’m not the type to completely replace foods with cauliflower (I can’t do the pizza crust guys, sorry), I love mixing cauliflower into foods because the color and texture are so versatile that it’s almost undetectable. It’s so sneaky. So, when I was craving cheesy potato soup this past week I decided to sub half of my potatoes for cauliflower for a little extra fiber and cruciferous action. This Cheesy Cauliflower and Potato Soup was super creamy and satisfying, without being overly heavy like creamy potato soups can sometimes be. It was the perfect weight for this transitional is-it-fall-or-is-it-summer weather! 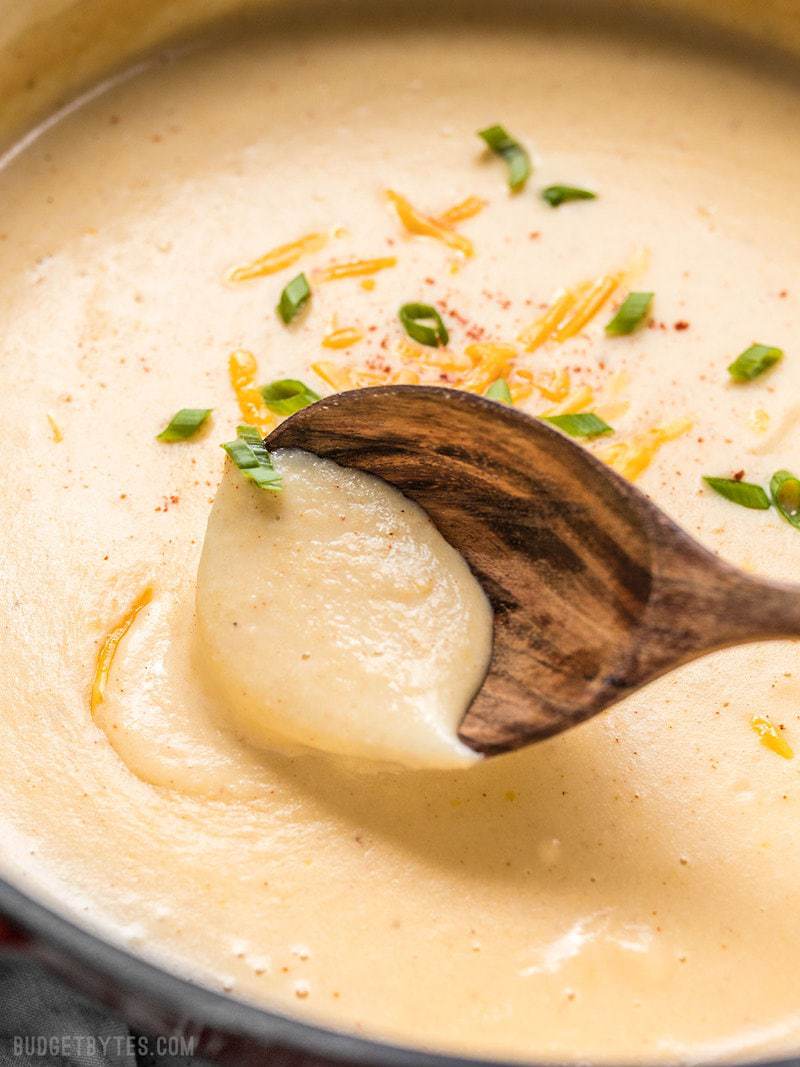 Cauliflower: I used a whole head of fresh cauliflower here because I was able to get it for a great price at Aldi, but you can substitute a one pound bag of frozen cauliflower florets in its place.

Evaporated Milk: I used evaporated milk because it is rich and thick without being overly heavy, but also because it acts as an emulsifier with cheese. You might be able to substitute heavy cream (a smaller amount, perhaps 1/2-3/4 cup) in its place, but I have not tested this to make sure. I do not suggest using soy, almond, or cashew milk because they are not thick enough, and coconut milk would probably be too strongly flavored and clash with the other ingredients.

Vegetable Broth: I used vegetable broth to keep this soup vegetarian, but chicken broth will work just as well.

Can I Use Frozen Cauliflower Instead of Fresh? 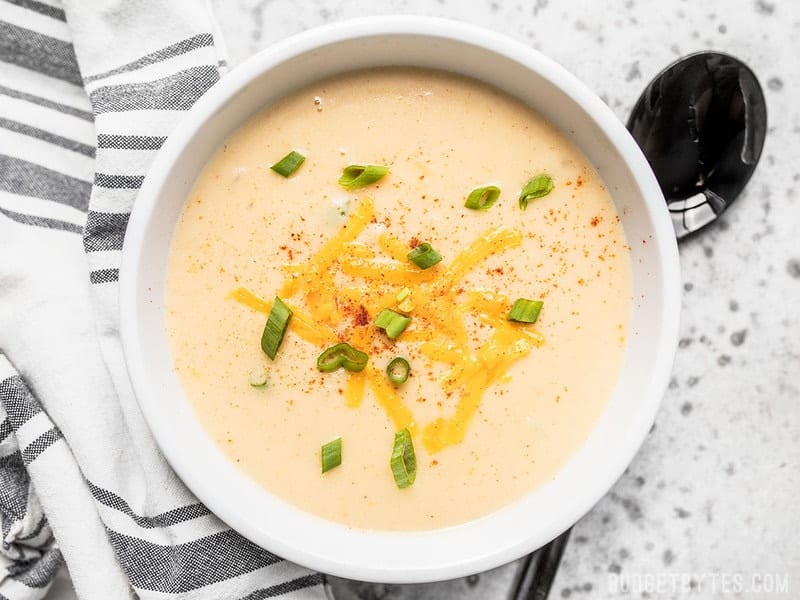 4.96 from 49 votes
Cheesy Cauliflower and Potato Soup is rich and creamy without being overly heavy. Eat your vegetables and enjoy them, too! 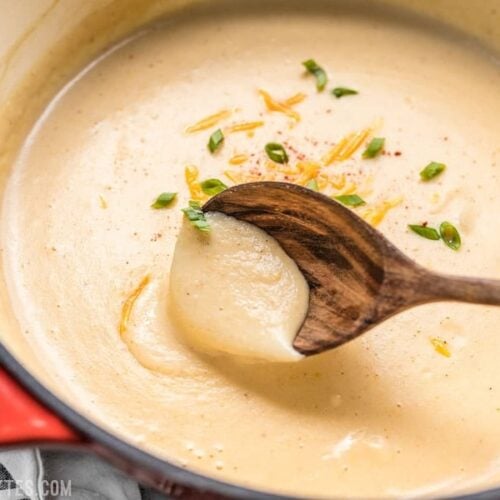 *The green onions really add a pop of flavor to each bowl, so I don't suggest skipping them. 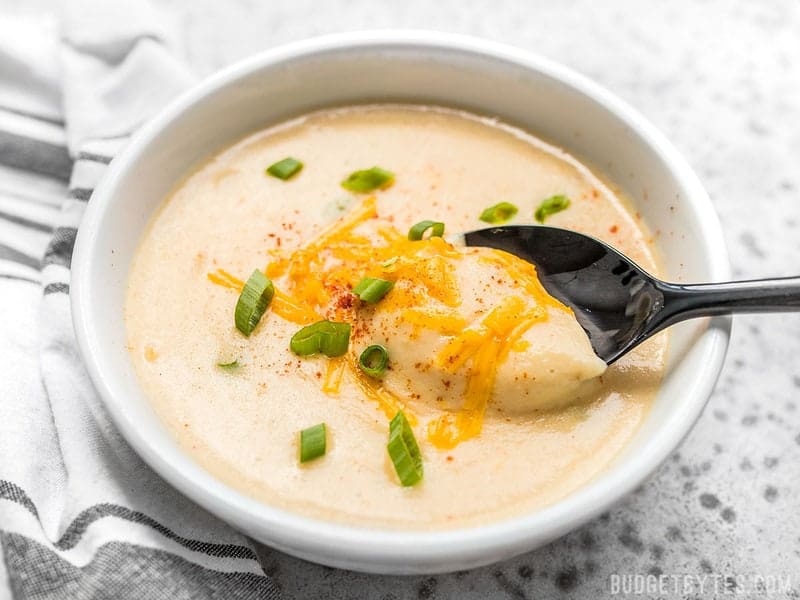 How to Make Cauliflower Potato Soup – Step by Step Photos 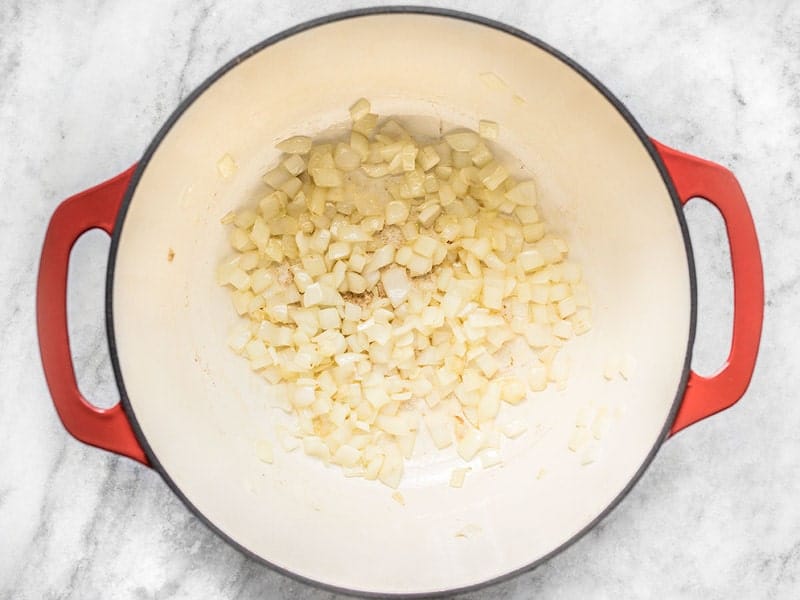 Start by dicing a yellow onion and adding it to a soup pot with 1 Tbsp olive oil. Sauté the onion for about five minutes, or until it has softened. 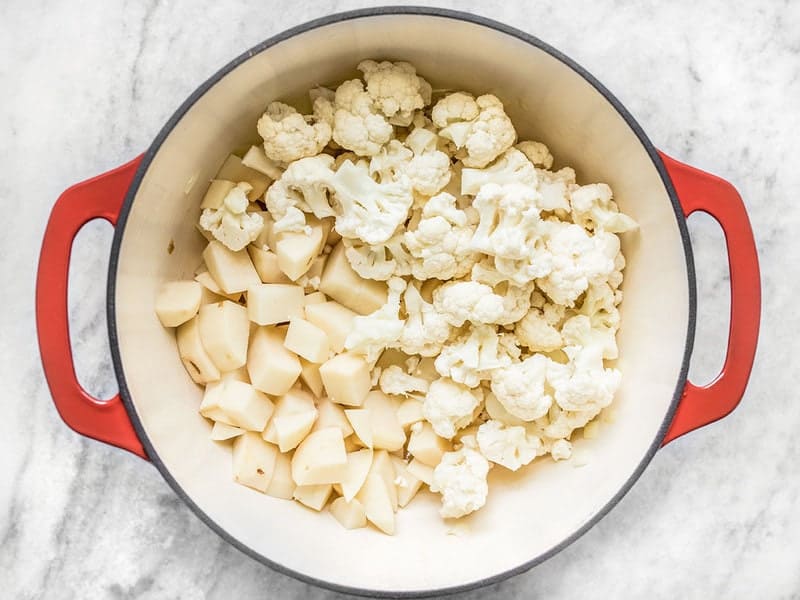 Peel and chop 1.5 lbs. russet potatoes into 1-inch cubes. Chop one head cauliflower into small florets. Add them both to the soup pot. 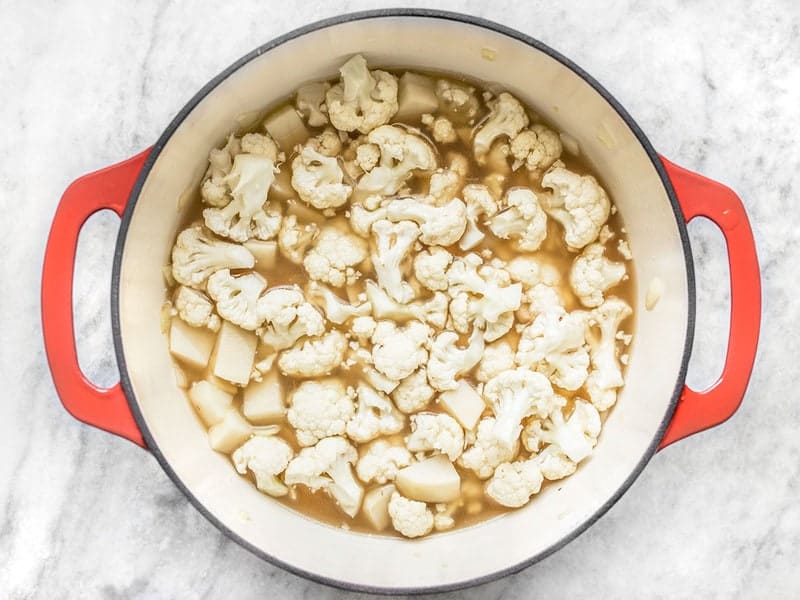 Add four cups vegetable broth to the pot as well. Place a lid on top, bring it up to a boil, then reduce the heat to medium-low and let it simmer for about 20 minutes… 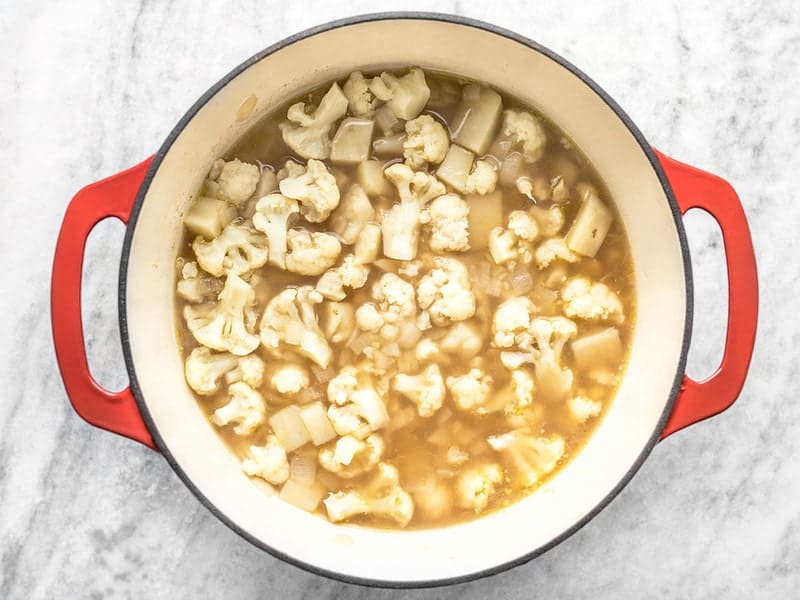 Or until the potatoes and cauliflower are extremely tender. They need to be extremely soft to be easily puréed. 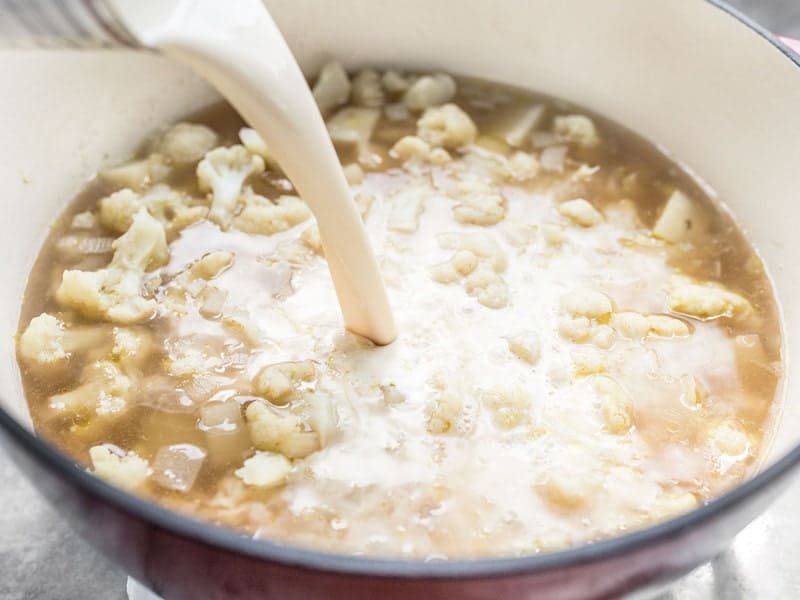 Add 12 oz. evaporated milk to the pot. This will help bring the temperature down, which is important if you are using a blender to purée your soup. If using an emersion blender, you can purée the soup right in the pot, even while it’s hot. If using a blender, it needs to be cooled until the soup is warm before blending. Blending hot liquids can build pressure and explode the top off the blender, spraying hot soup everywhere and potentially burning you. SO, let the soup cool a bit, transfer it in batches to the blender, DRAPE A TOWEL OVER THE CLOSED LID, and then blend until puréed. 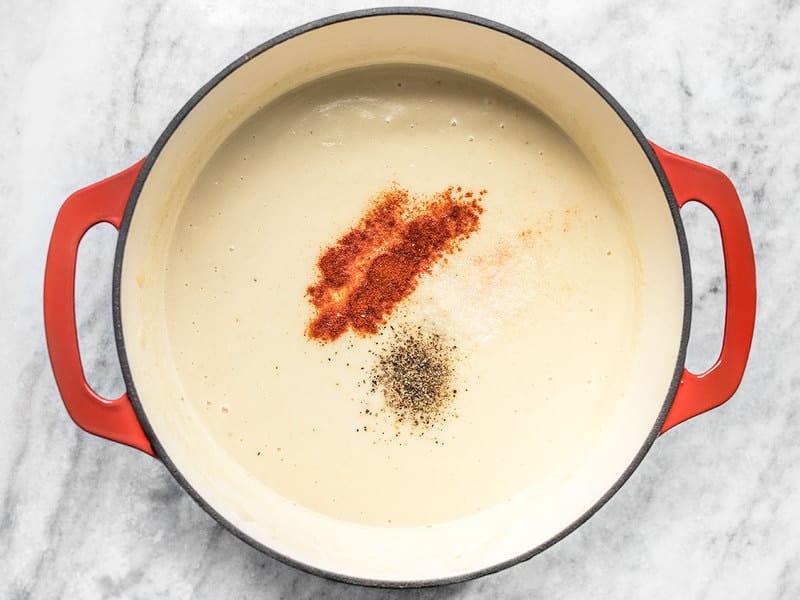 Once puréed, season the soup with 1/2 tsp smoked paprika, some freshly cracked pepper (maybe 10-15 cranks of a pepper mill) and salt. I used 1 tsp salt, but you will want to taste and adjust this to your liking. The salt content of vegetable broth can vary, so the amount of salt needed at this point will vary as well. 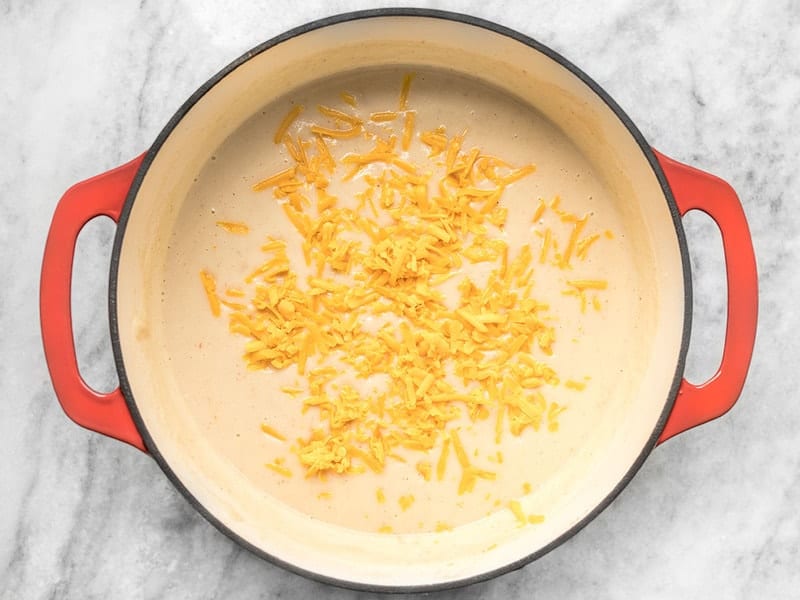 Now it’s time to add the cheese. The soup needs to be hot to melt the cheese, so if you let it cool to purée, simply place it over medium heat again until the soup is hot (stir fairly often). Add the cheese to the soup, one handful at a time, stirring until the cheese is fully melted into the soup. 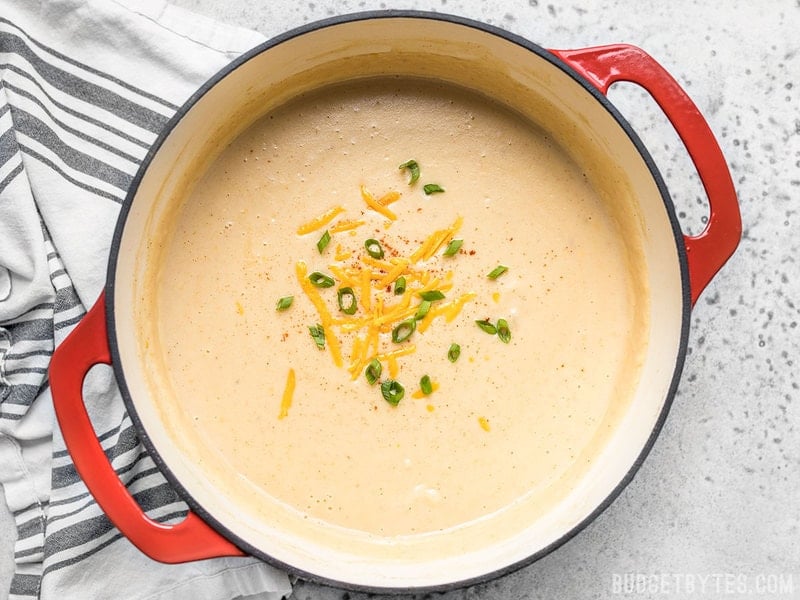 And that’s it! It’s never a bad idea to taste the Cheesy Cauliflower and Potato Soup one last time to see if you want to adjust any of the seasonings. Serve each bowl with a few sliced green onions sprinkled over top. The onion really adds a pop of fresh flavor that I felt took the soup to a higher level. 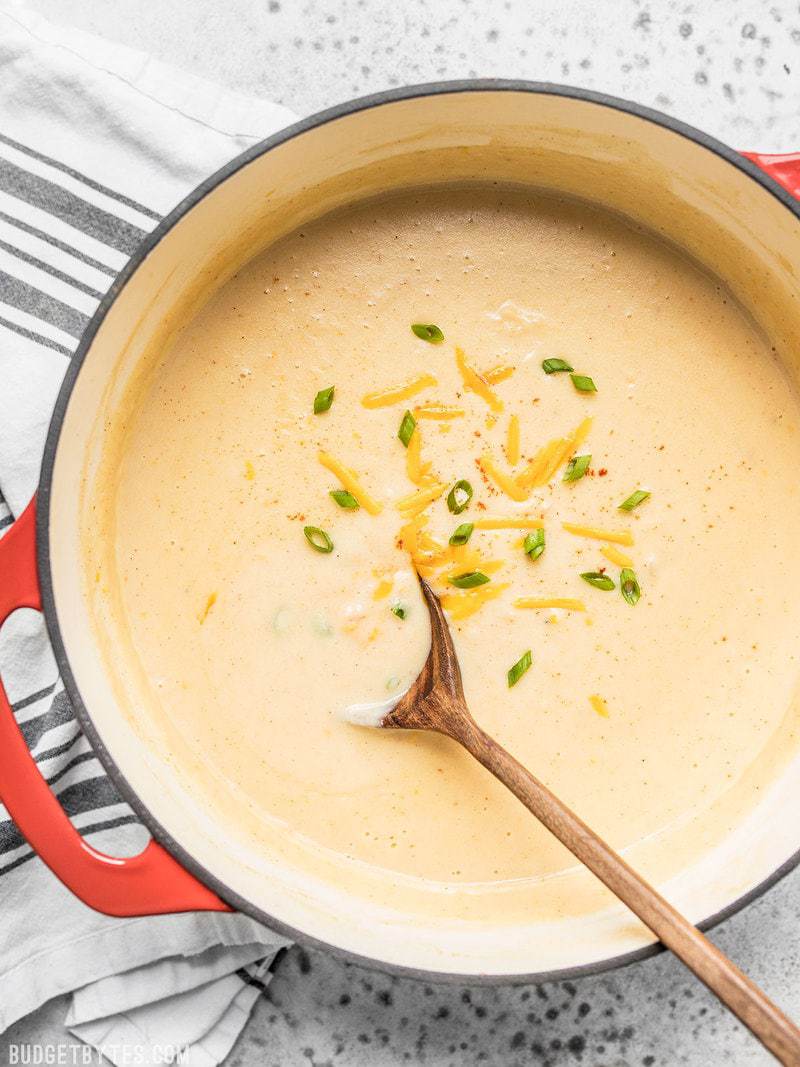