This recipe was a true labor of love. Sometimes food just taste better when you know you’ve put a lot of time into it.

It’s not that this recipe was at all difficult, it just takes time. Between the fermenting dough and caramelized onions, you need to plan ahead for this one. But most of the time is spent letting the ingredients do their own thing while you go paint your toe nails, do your laundry, or watch Law & Order. So, don’t be scared off by the length of it.

This pizza is truly awesome with it’s garlicky cream sauce, sweet caramelized onions, and earthy sauteed mushrooms. Everything just goes together. And after calculating the cost, I have to say I was quite surprised. I expected the total to be twice as much and to have to explain that I was simply trying to use up a bag of onions that have been sitting on my counter for a couple weeks and a half pound of mushrooms that were starting to get wrinkly in my fridge. I guess I don’t have to make excuses after all! It’s an all around winner!

So, plan ahead to have a pizza night this Friday and mix up your dough the night before… you WON’T be disappointed! 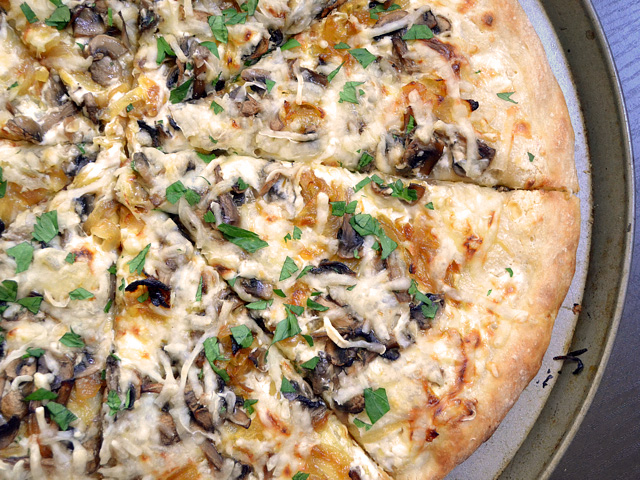 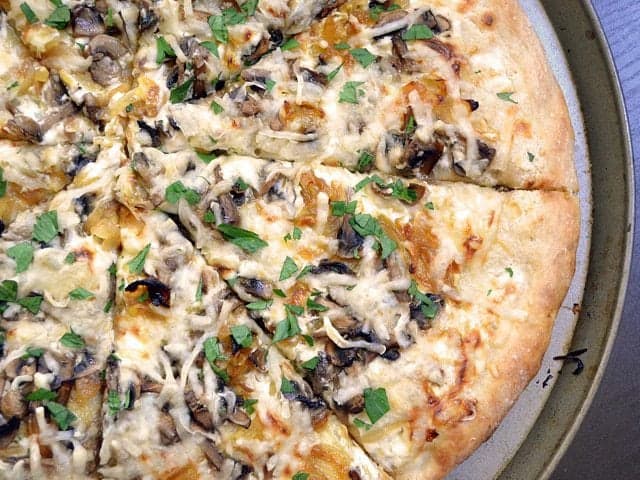 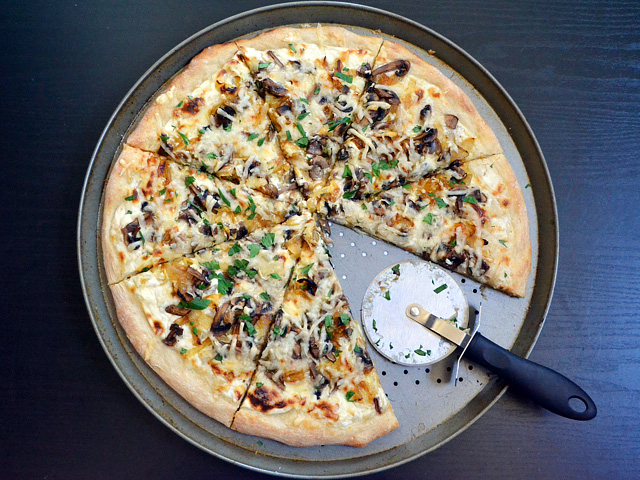 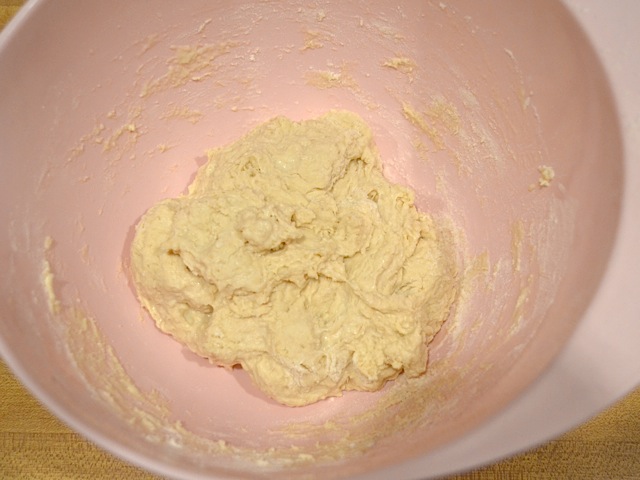 The night before, stir together the flour, salt, and yeast. Stir in just enough water until it forms a ball of dough like this. For me it was about 3/4 cup of water, but it will be different every time depending on the humidity and other factors. Loosely cover the dough and let it sit at room temperature for 12-18 hours. This will develop the gluten to give you a nice crisp/chewy crust and also provide flavor. 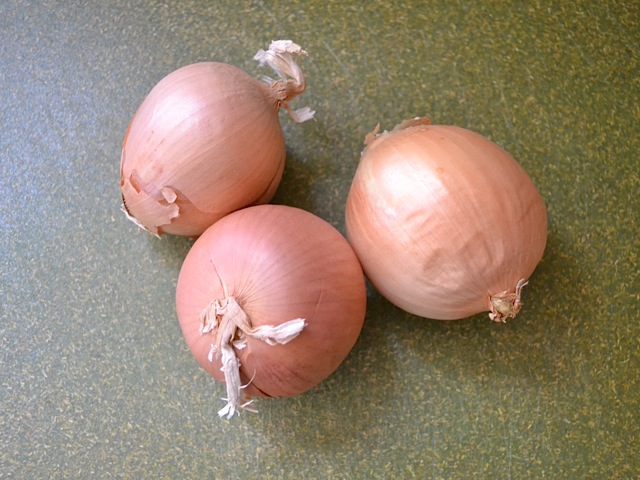 The next day, about an hour and a half before you want to eat, get the onions started. You can use three small or two medium or large onions. You could even caramelize a double batch and then freeze half so that you don’t have to do it all over again next time! 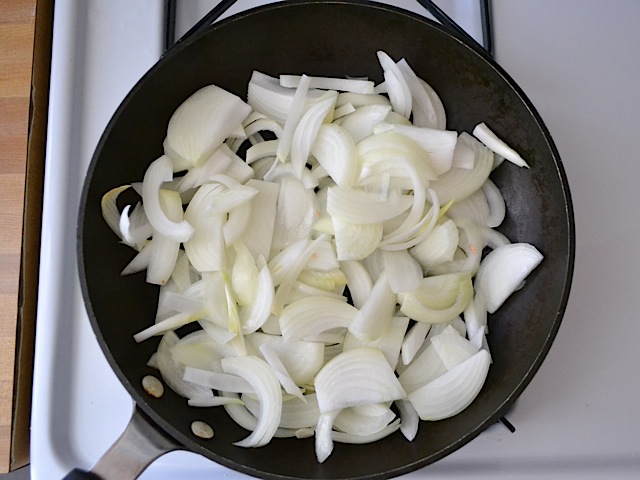 Slice the onions and pop them into a skillet along with 2 tablespoons of olive oil. Start cooking them over medium/low heat, stirring every few minutes. 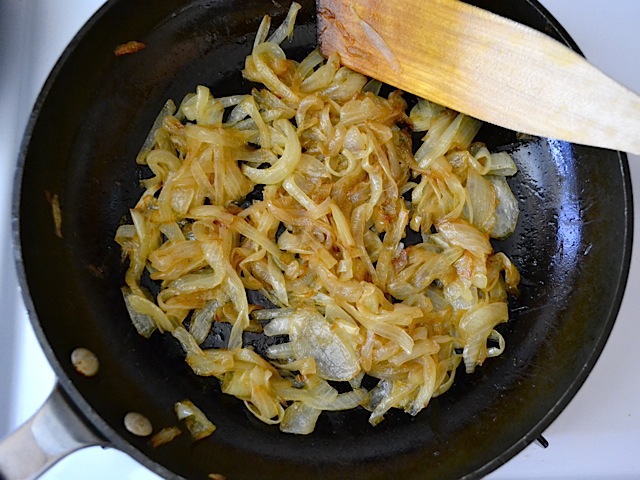 This is a long, slow process and must be done that way. After about 45 minutes of slow cooking, the onions will be like this. I could have even cooked them longer, but I was all like “I WANT PIZZA NOW!” so I stopped here. For a more detailed photo instruction of how to caramelize onions, look here. 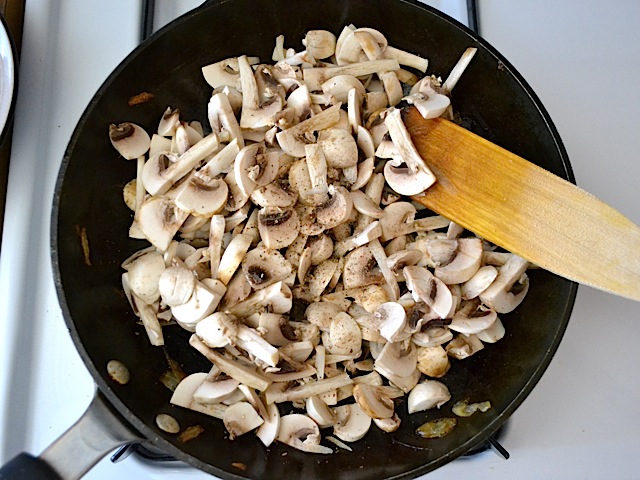 To avoid dirtying another pan, I just took the onions out and added my sliced mushrooms. There was enough oil left over in the skillet that I didn’t need to add more, but do so if you need to. Also add a pinch of salt, pepper, and a 1/4 tsp of dried thyme. 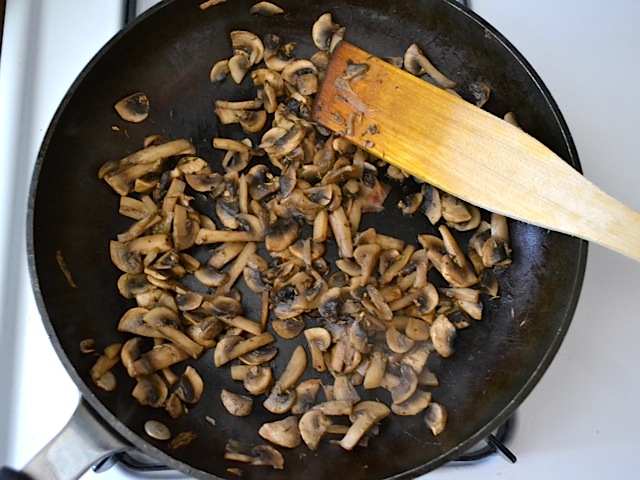 Cook those mushrooms down until they have released all of their moisture and then that moisture has evaporated off (about 10 minutes). 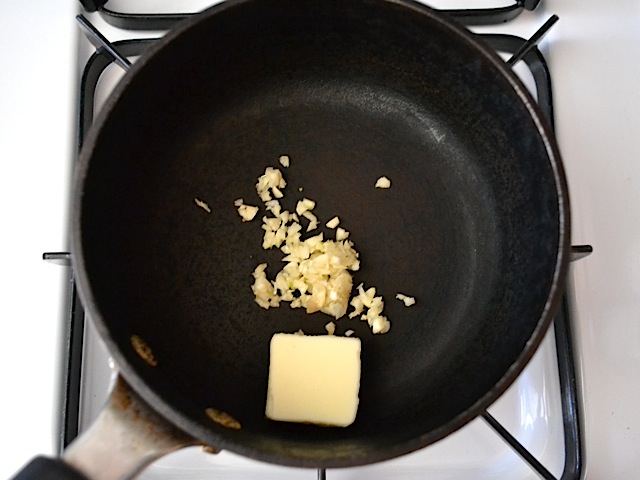 While the mushrooms are cooking, you can begin making the sauce. Mince a clove of garlic and saute it for about 2 minutes in a tablespoon of butter. 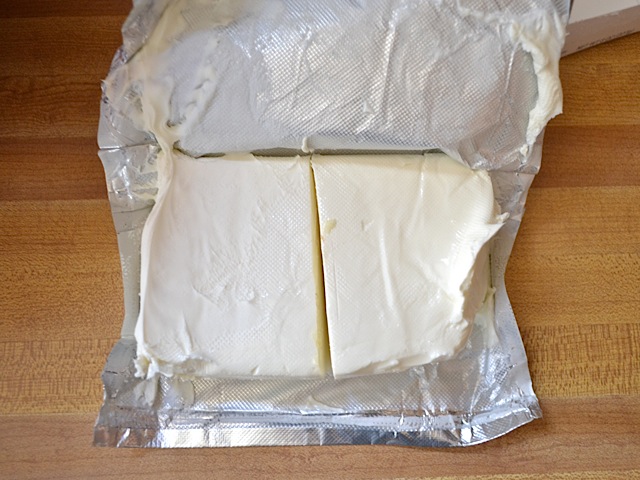 Then add 4 ounces of cream cheese, a half cup of milk, and a 1/4 teaspoon of salt… 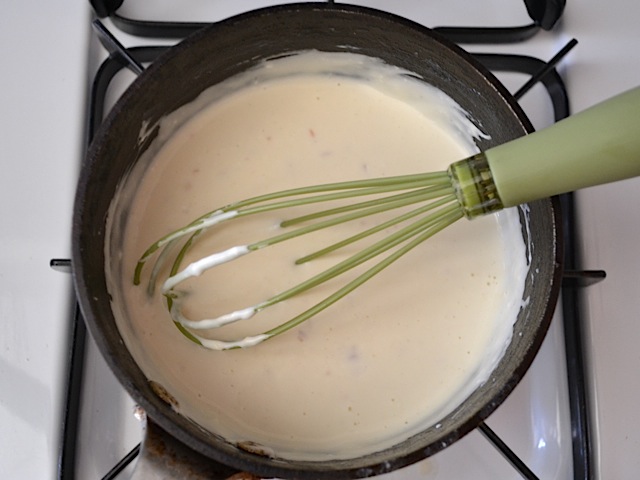 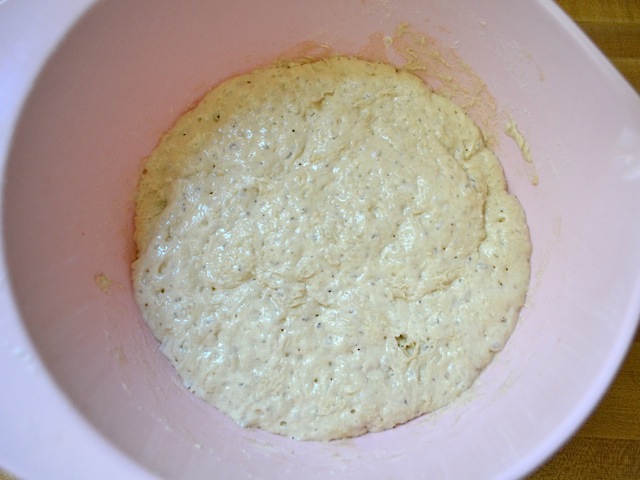 Now back to that dough… This is what it looks like after about 16 hours. Big, fluffy, bubbly, and most importantly, STICKY. Sprinkle some flour over top of the dough and then use your hands to scrape it off the sides of the bowl and onto a floured counter top. Oh yeah, and begin to preheat your oven to 500 degrees now too, because that may take a while. And make sure your oven rack is on it’s highest level. 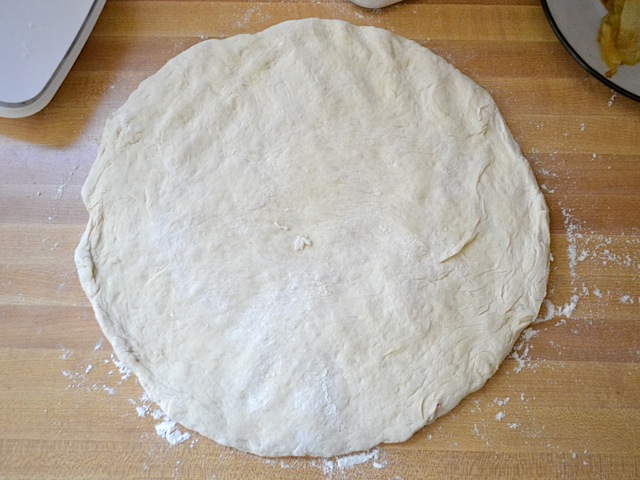 Once you have the dough out on your counter top, press it down into a circle that is about half the size that you want it. You need to be able to transfer it to the pizza pan and then you can stretch and press it the rest of the way out once it’s on there. I used a large 16 inch pizza pan. 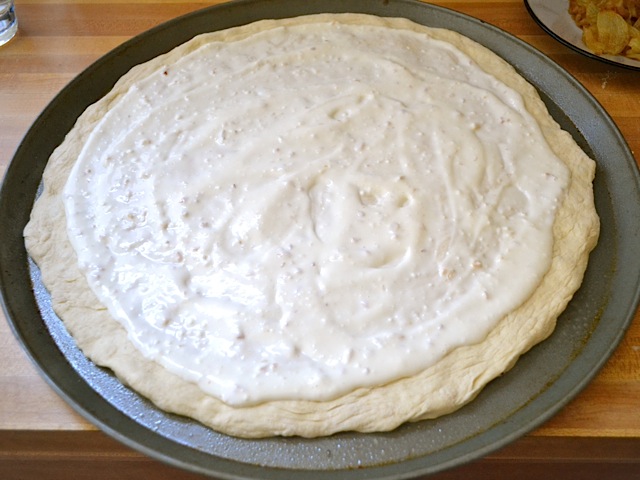 Transfer the partially stretched dough onto a pizza pan coated with non-stick spray. Stretch it the rest of the way out. Pour the cream sauce on top and use the back of a spoon to spread it around. 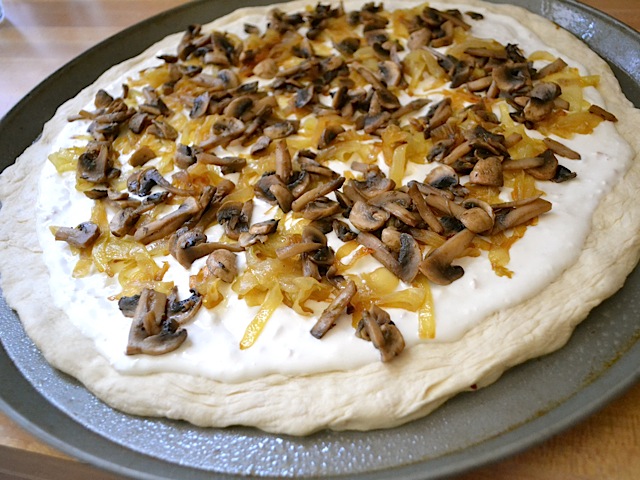 Sprinkle the mushrooms and onions over top… 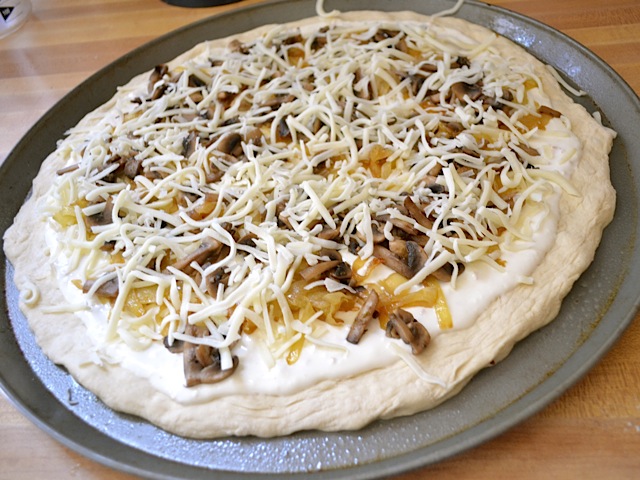 And then sprinkle just a little mozzarella over top (1 cup). Since there’s already a rich cream sauce, I didn’t want to add a ton of cheese. Plus, I didn’t want it to over power the onion and mushroom flavor. Bake that puppy for about 12-15 minutes or until the crust is nice and golden brown. Add fresh parsley on top after cooking, if desired (it just makes it look nice). 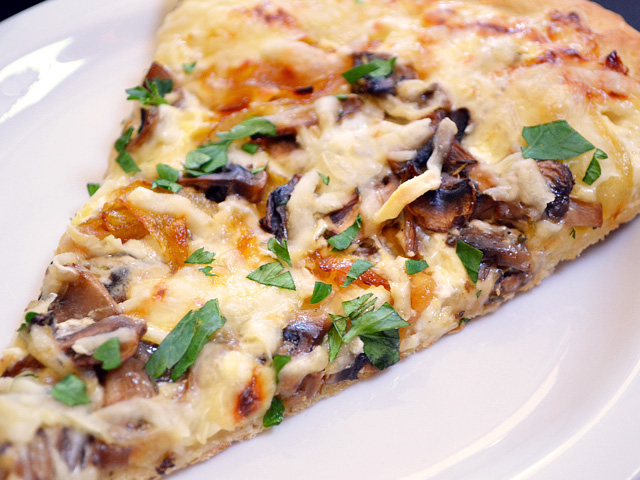