I have something really fun (and delicious) for you today!! I’m so excited about this, guys. My friend, Daniel Shumski, released his second book yesterday and it’s a gem! The book is called Will It Skillet? (a follow up to his first book, Will It Waffle?, LOL, I love his book titles!) and it contains 53 easy recipes that can be made in a cast iron skillet. Not only is this great for easy weeknight cooking, but if you’re an avid camper, this book will probably serve you well. Anyway, he’s letting me share one of the recipes from the book with you, so I chose the Mac and Cheese Recipe.

Let me just tell you, THIS is my new favorite mac and cheese. IMHO it tops all other mac and cheese methods in both ease and creaminess. I’ve made it twice this week and already want more!

This recipe has been reprinted with the permission and generosity of Danial Shumski and Workman Publishing.

Will It Skillet? Mac and Cheese 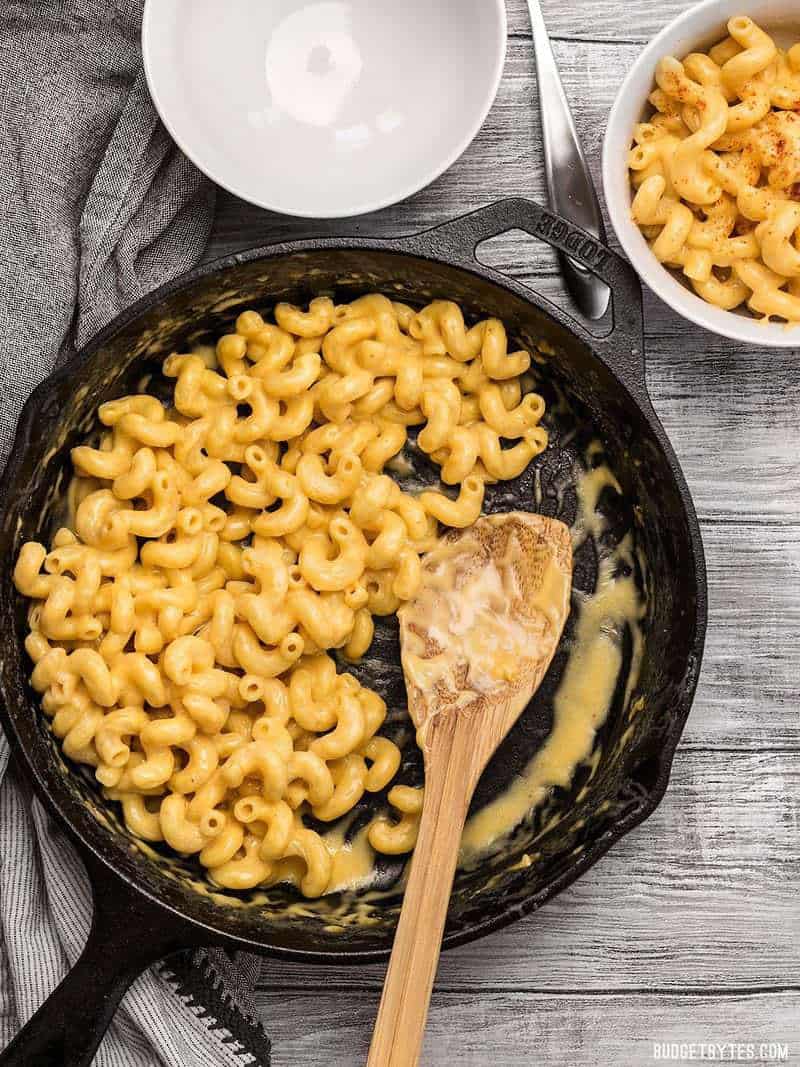 Why This is My New Favorite Mac and Cheese

So what’s so special about this mac and cheese? Wellllll let me count the ways.

Just be careful, because like I said, this mac and cheese is just so easy and delicious that it’s also very dangerous. I can see myself keeping the very few ingredients needed to make this on hand and just making mac and cheese all the time. Pandora’s box has been opened.

Will It Skillet? Mac and Cheese

4.32 from 29 votes
Recipe reprinted with permission from Workman Publishing.
This incredible roux-less mac and cheese is rich, creamy, and only requires seven ingredients. Perfect for last minute weeknight dinners!
Author: Daniel Shumski // Will It Skillet? 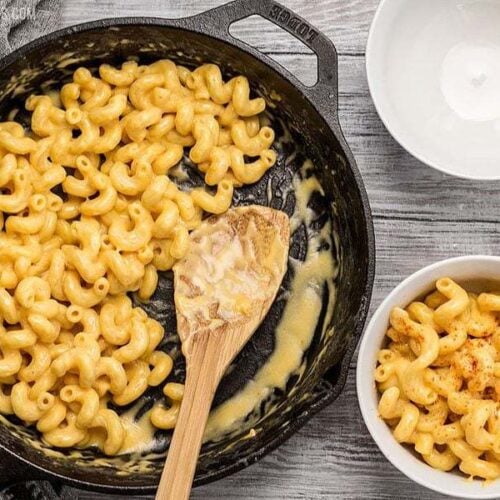 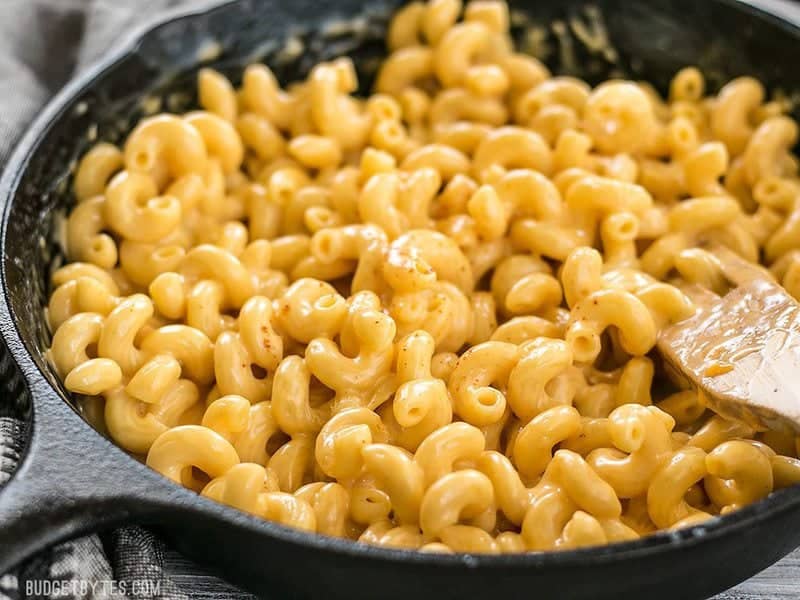 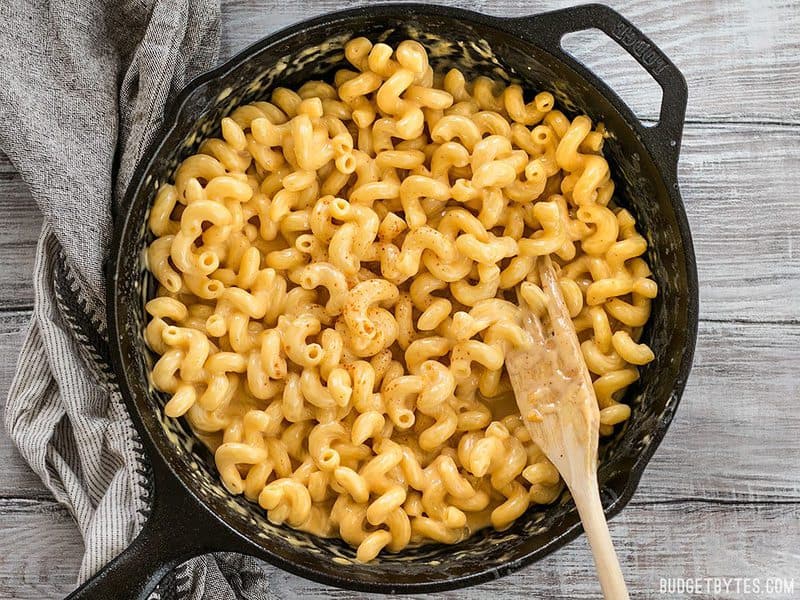 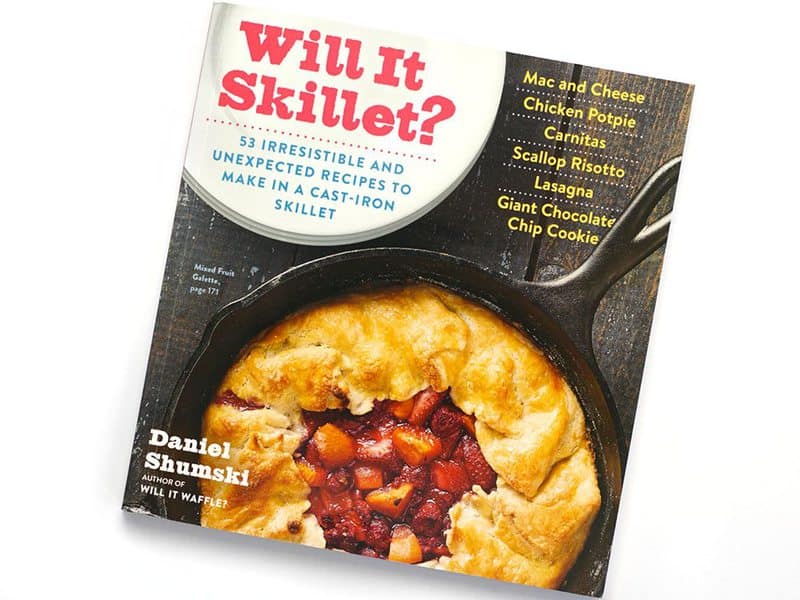 Here is Daniel’s book, for reference. Seriously so many yummy things in here! 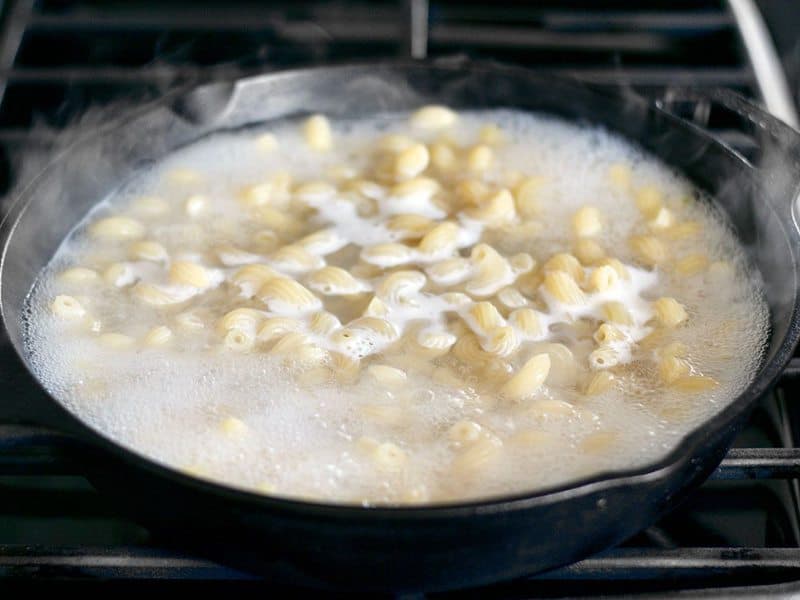 To begin the mac and cheese, fill your skillet about 3/4 full with water and add 1/2 tsp salt. Bring it up to a boil over medium-high heat. Add 2 cups (or about 1/2 lb.) of elbow macaroni or any shape of similar size. Boil the pasta just until it is al dente. Leave it slightly under done because it will continue to cook and soften in the sauce. Make sure to stir it often as it boils if you’re using a shallow skillet like this. Once cooked, drain the pasta in a colander. 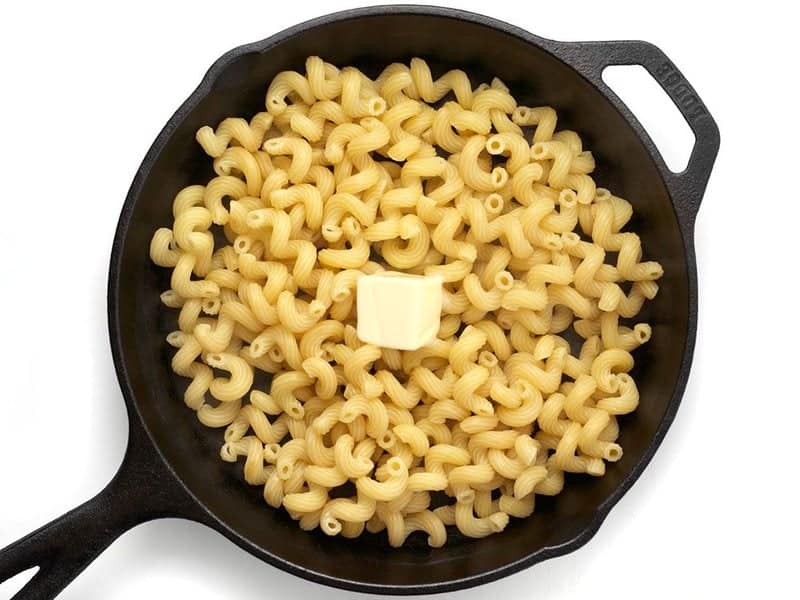 Turn the heat down to LOW and return the cooked and drained pasta to the skillet, along with 2 Tbsp butter. Stir the butter into the pasta until it is completely melted. 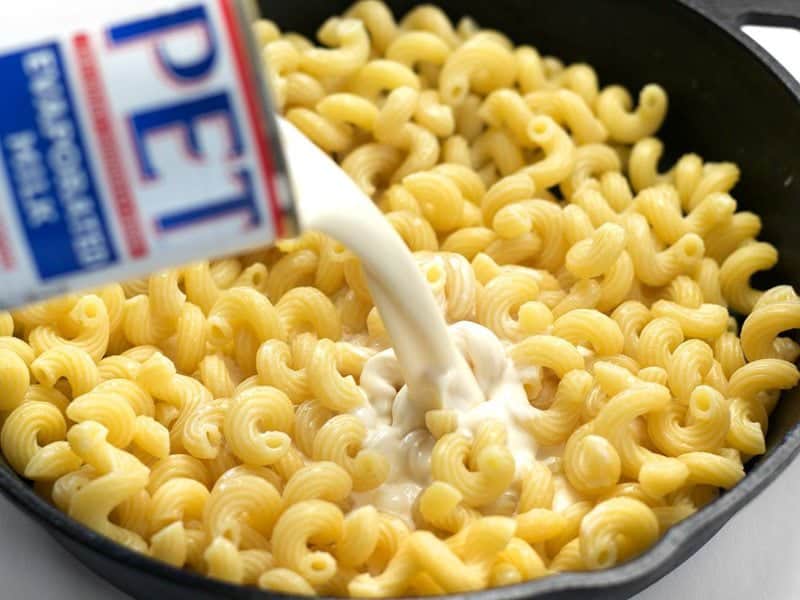 Add 3/4 cup evaporated milk and let it begin to heat through. 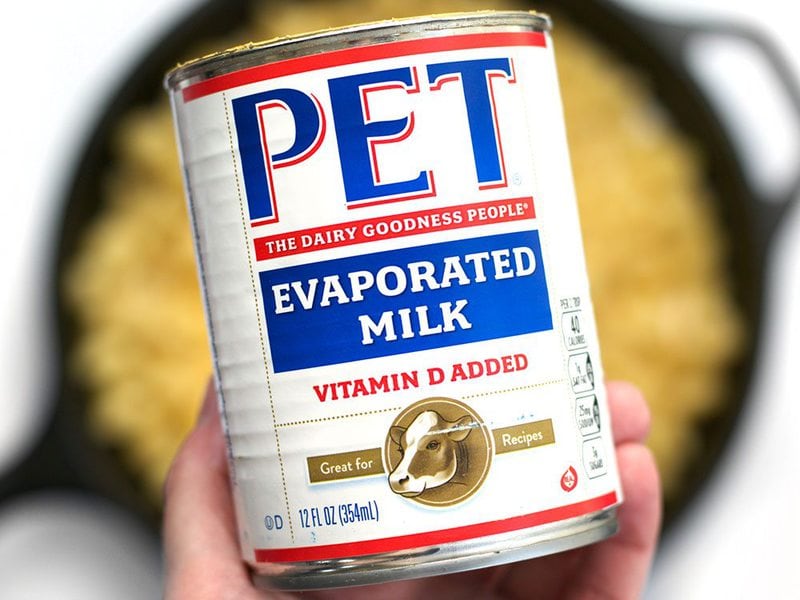 Make sure you buy “evaporated milk” and not “sweetened condensed milk” because they are two very VERY different things. ;) Luckily, the 3/4 cup needed for this recipe was 1/2 of this can, so I saved the other half to make a second batch a couple days later (see? DANGEROUS). 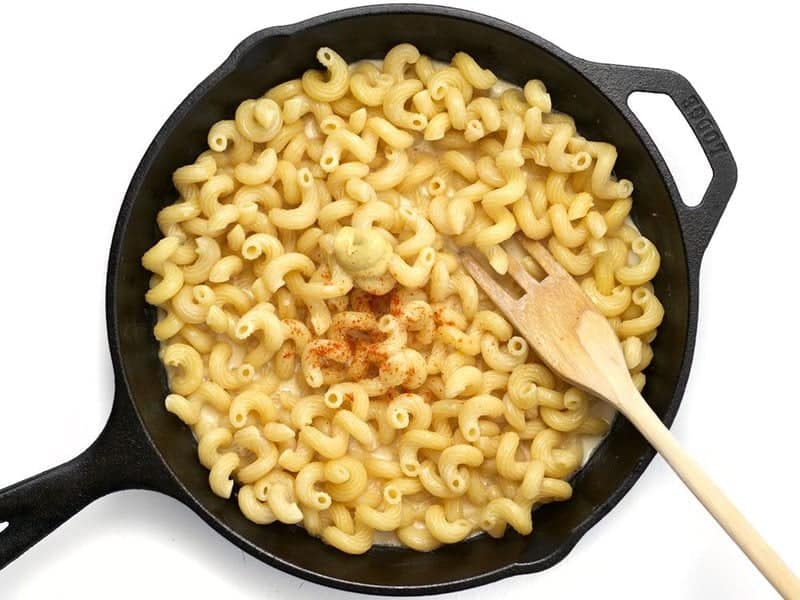 Also add 1/2 tsp Dijon mustard and a pinch of cayenne. 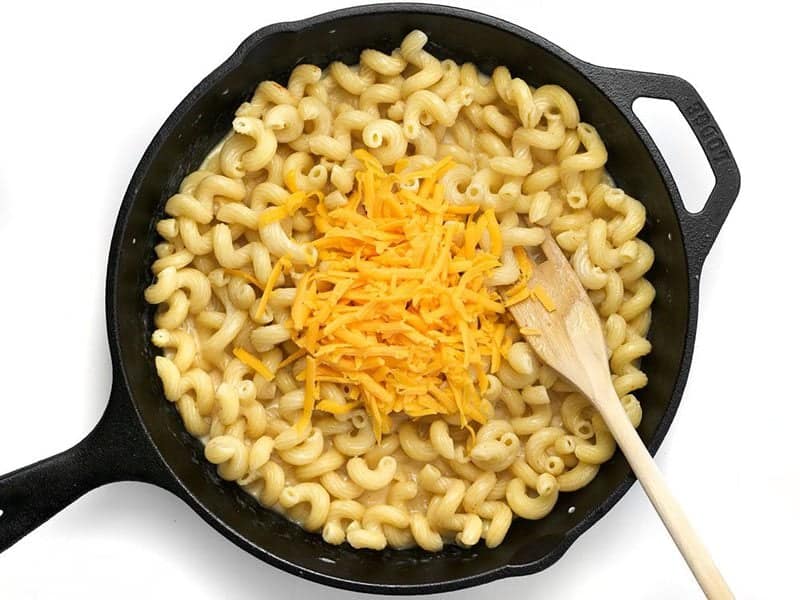 Once the evaporated milk has heated up a bit (this shouldn’t take more than a minute or so), begin adding 1.5 cups shredded sharp cheddar, one handful at a time. Make sure the cheese is fully melted in before adding the next handful. I added my cheese in three batches. 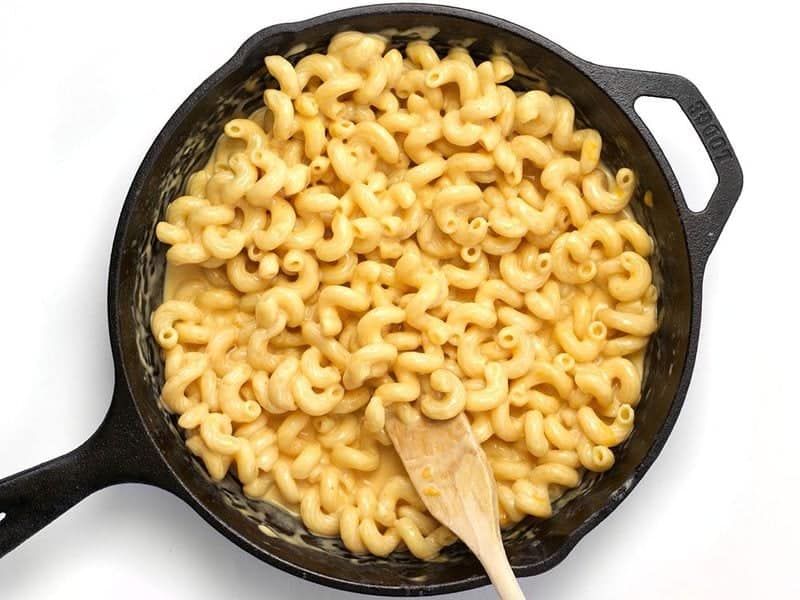 As the cheese melts in the sauce will thicken into the silkiest, cheesiest skillet of goodness you’ve ever eaten. It’s so perfect. 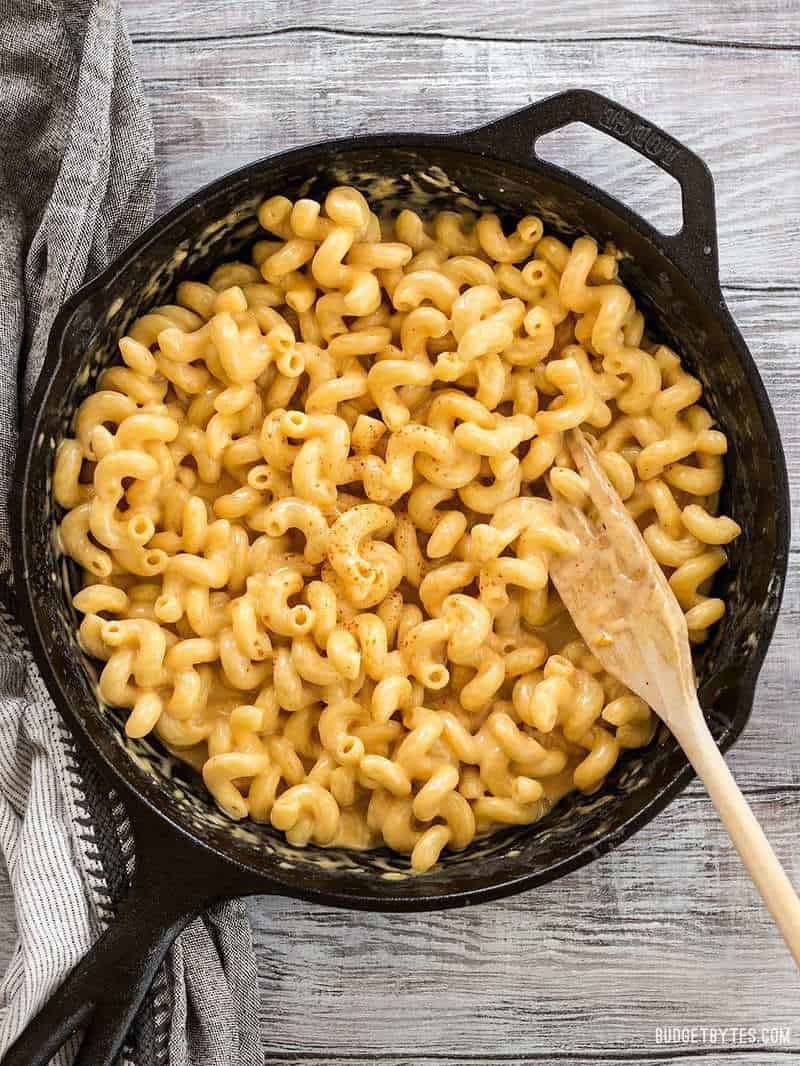 And that’s it! You’re done! Now just try not to eat it all yourself. ;)