My favorite thing to do with a recipe is to pare it down as far as possible while maintaining big flavor. I’ve made a lot of Asian inspired marinades and glazes over the years, but this time I took my marinade down to the bare bones, and guess what? I think it’s my favorite one by far. You just can’t beat simple. So, if you’re new to cooking, this Sticky Ginger Soy Glazed Chicken is probably a good recipe to start with because it’s so damn simple and I promise you’ll impress yourself with the flavor. ;) 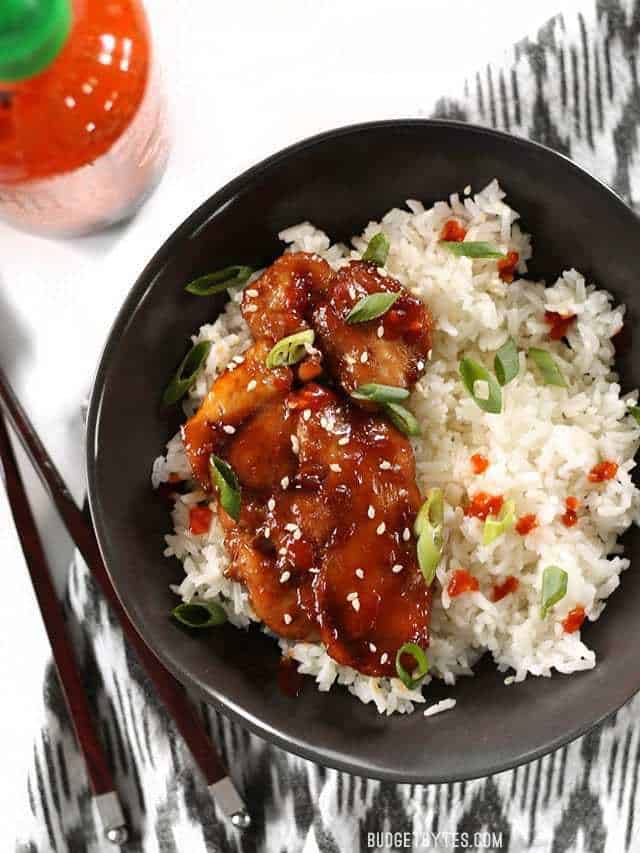 This super simple marinade can be used on chicken breast or thighs, but I prefer thighs because they’re usually already in small, manageable, and quick cooking pieces that stay juicy and tender. If you’re using chicken breasts, I suggest cutting them into smaller pieces or pounding them thin to both increase chicken to marinade contact and to make sure they cook quickly.

Once marinated you can cook the Sticky Ginger Soy Glazed Chicken in a skillet or on a grill (I almost used my George Foreman, but decided a skillet made for better pictures #foodbloggerlife). A grill probably gives you better browned edges and caramelized sugars, but a skillet is just SO easy. 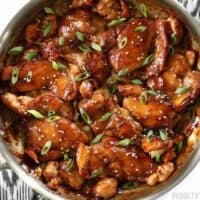 *It is safe to cook used marinades as long as they come to a full boil, according to the FDA food safety guidelines. This thoroughly cooks the marinade, just like the raw chicken that was in it, to kill bacteria. The used marinade should be cooked immediately and should not be stored uncooked for later use. If concerned, double the marinade and use half for the chicken and reduce the other half in a small sauce pan before brushing it onto the chicken.
See how we calculate recipe costs here.
Tried this recipe?Mention @budgetbytes or tag #budgetbytes on Instagram! 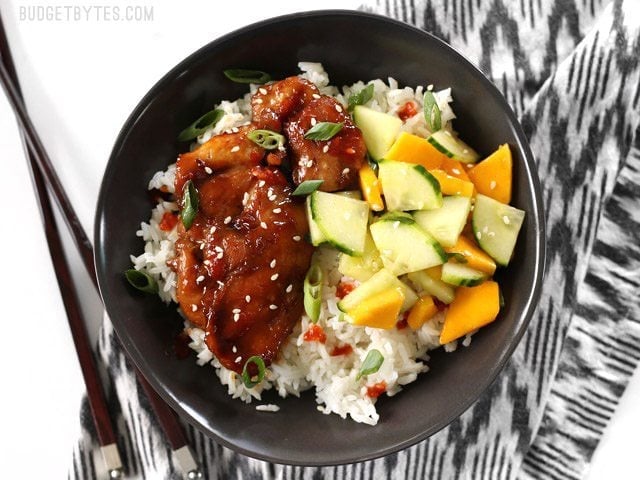 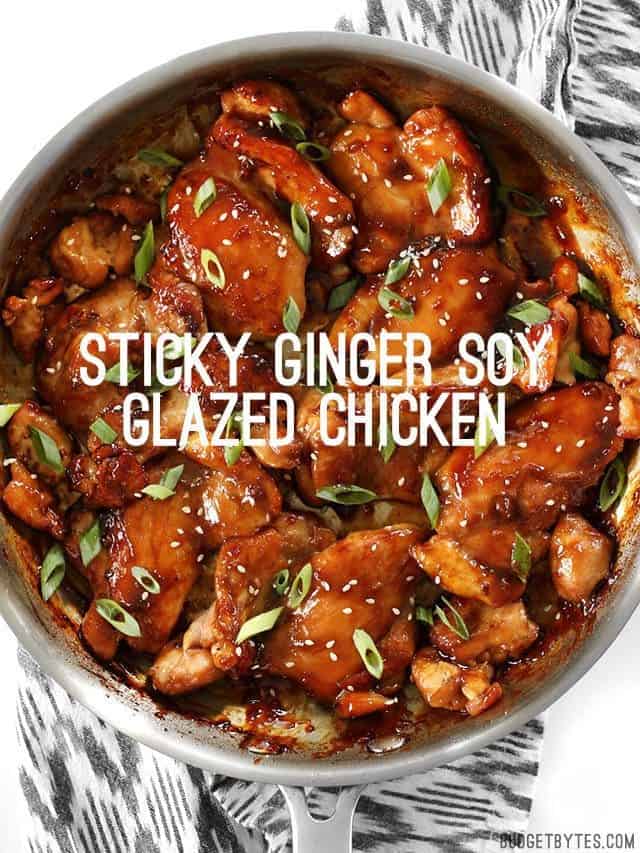 How to Make Soy Glazed Chicken – Step by Step Photos 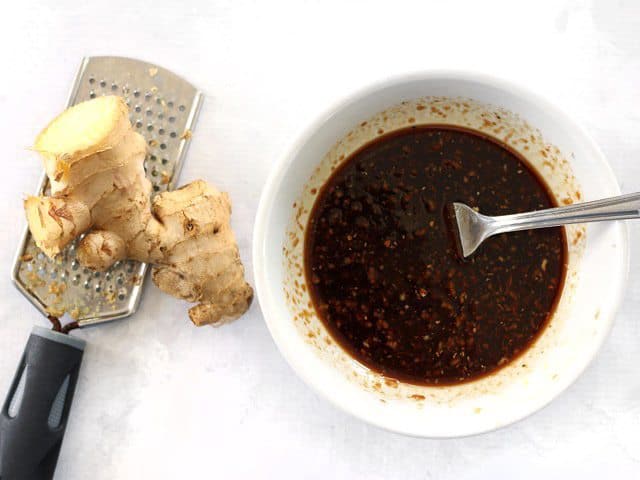 To prepare the awesomely easy ginger soy marinade, mince two cloves of garlic and grate about 1 Tbsp fresh ginger (more information on how to buy and use ginger can be found here). Combine the garlic and ginger with 1/4 cup brown sugar, 3 Tbsp soy sauce, 1 Tbsp cooking oil, and some freshly cracked pepper (about 15 cranks of a pepper mill). 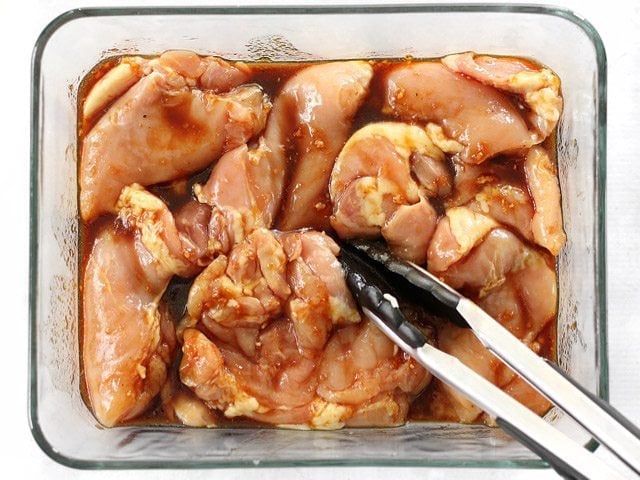 Place eight boneless, skinless chicken thighs in a shallow container or gallon size zip lock bag and pour the marinade over top. Turn the thighs to coat in the marinade, then cover and marinate (refrigerated) the chicken for at least 30 minutes or up to one day. 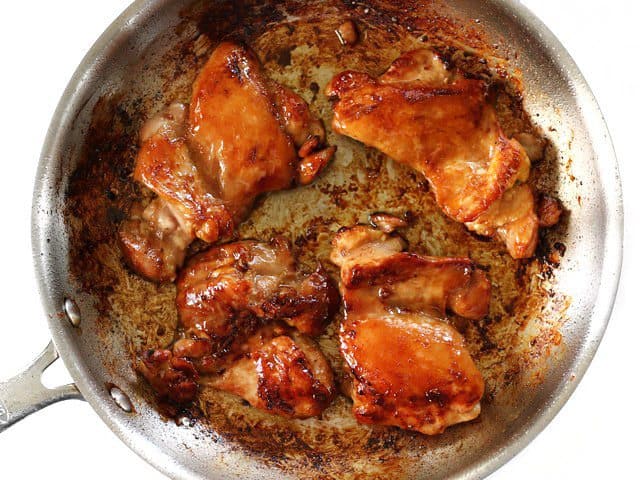 When ready to cook, heat a large skillet over a medium flame. Once hot, add 1/2 Tbsp cooking oil and tilt the skillet to swirl the oil over the surface. Add half of the chicken thighs and cook on each side until well browned and cooked through. Remove the chicken from the skillet onto a clean plate, then repeat with the second batch of chicken. 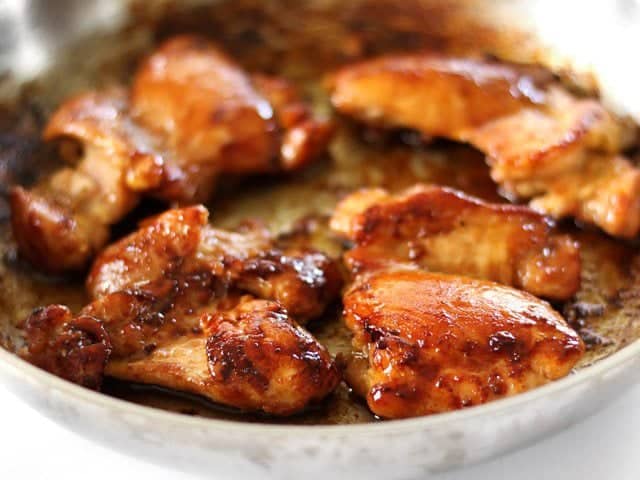 The reason the marinade is not poured in WITH the chicken and the chicken is cooked in two separate batches is because too much moisture in the skillet will prevent those nice browned edges and caramelized sugars. So, work in two batches and cook the marinade separately. 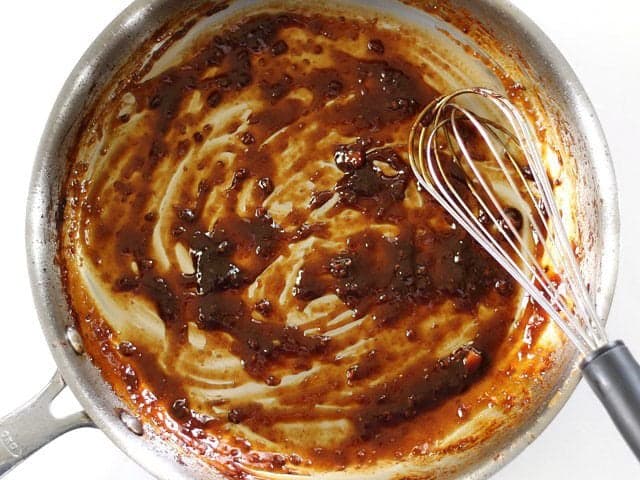 Once the second batch of chicken has been cooked and removed from the skillet, pour in the leftover marinade and let it come to a boil. Whisk the marinade as it boils to dissolve the browned bits from the skillet. Let it continue to boil until it reduces to a thick glaze (this only takes a few minutes because there isn’t much marinade). This cooks the marinade, just like you cooked the chicken, to kill bacteria (it’s no less safe than the actual chicken or the marinade that is on the surface of the chicken when it cooks). FDA foodsafety guidelines for marinades. If this still makes you uncomfortable, you can skip this extra glaze (the chicken will still be nice and sticky), or double the amount of marinade in the beginning and only use half on the chicken. You can cook the second “clean” half in a sauce pan until it thickens to a glaze. 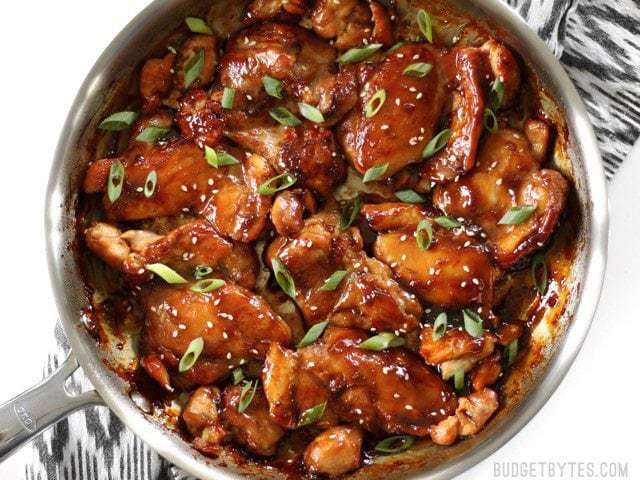 Return the cooked chicken to the skillet and dredge it on both sides in the sticky glaze. Top the chicken with sliced green onions and sesame seeds, if desired. 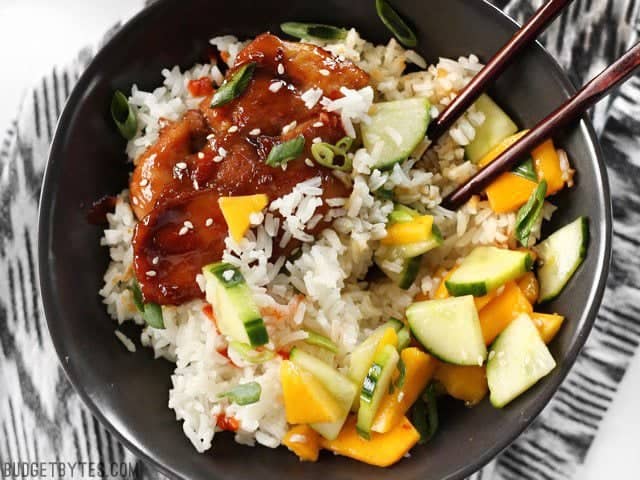