What is a Wonderpot? It’s a pasta dish that cooks all in one pot (a.k.a. One Pot Pasta) with vegetables, aromatics (garlic, onion), and broth so that every bite is packed with flavor. The broth and pasta create a rich saucy gravy in the pot that coats everything in wonderful flavor. This Spinach and Artichoke Wonderpot is like, the easiest, tastiest “dinner in 30 minutes” meal! 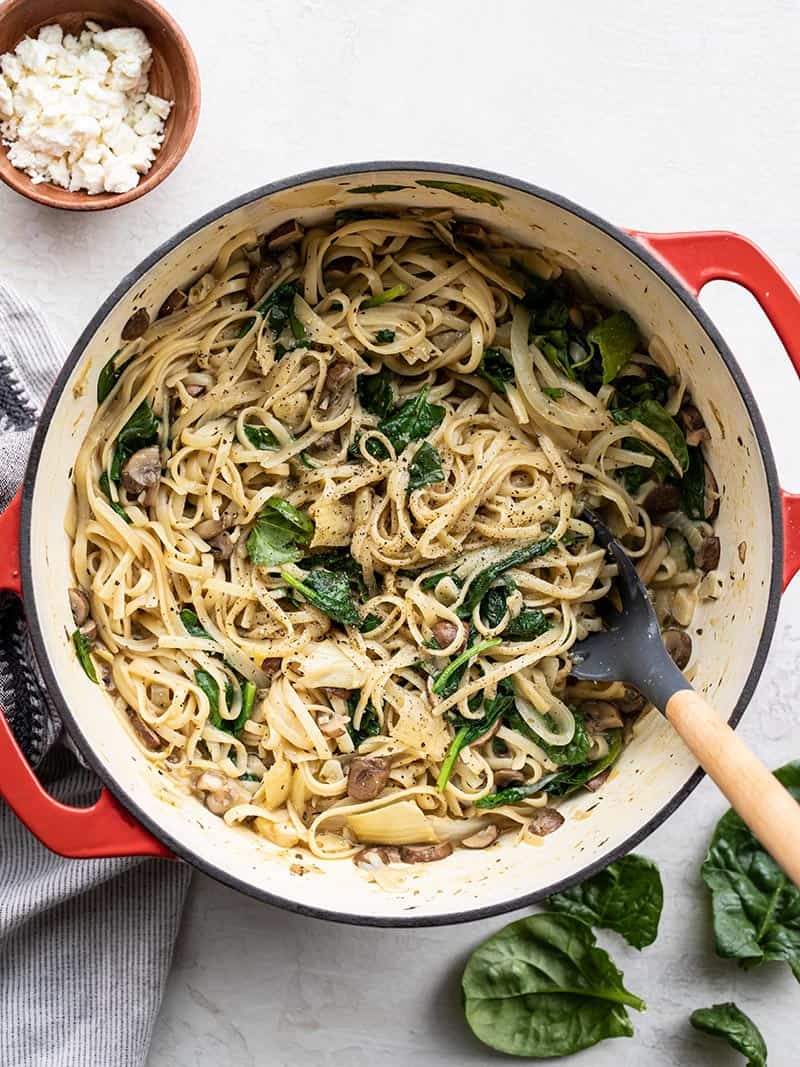 Use Fresh or Frozen Spinach

What Kind of Artichokes Should I use? 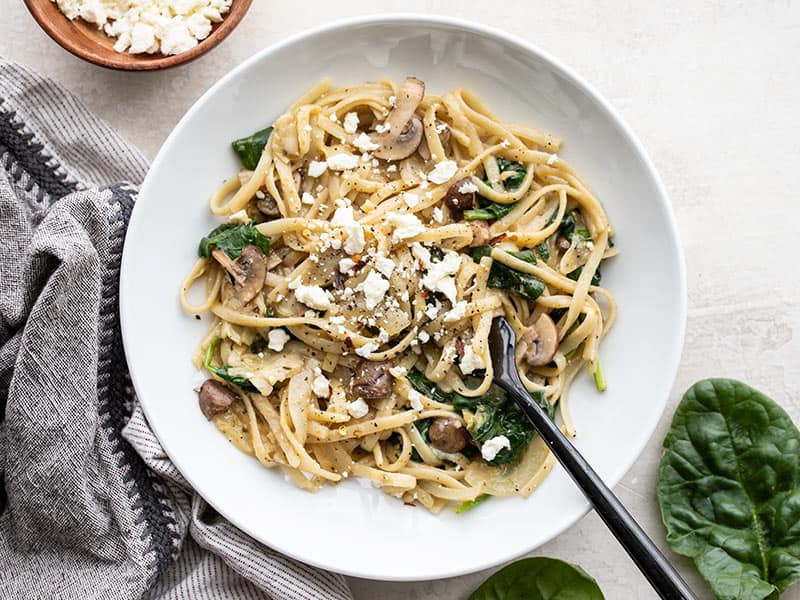 Can I Use a Different Pasta Shape?

Yes, you can use a different type of pasta, just be aware that different shapes may need different amounts of broth to cook properly, so you’ll have to adjust the recipe slightly. You can do this as the pasta cooks, adding more broth if it becomes dry before the pasta is tender, or allowing the pasta to boil without a lid if it’s too brothy when the pasta is nearly cooked through.

Can I Freeze the Spinach and Artichoke Wonderpot?

Yes, you can freeze this dish, just be aware that the pasta may soften further through the freeze and reheat cycles. The best option for reheating would be in the microwave, first on the defrost setting, then high once it has loosened enough to stir.

Love One Pot Pastas? Check out my entire category of One Pot Meals for more!

4.08 from 114 votes
This delicious and simple Spinach and Artichoke Wonderpot is a One Pot Pasta that takes less than 30 minutes to make and is packed with vegetables.
Author: Beth - Budget Bytes

If you use low sodium vegetable broth, you may want to season with a little salt at the end. Sometimes just a pinch of salt will help pronounce the flavors and prevent a bland finish. 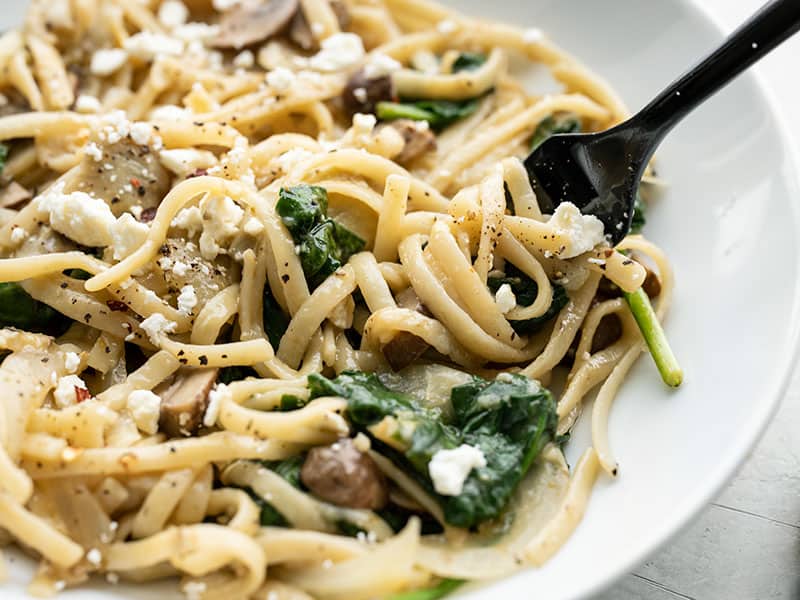 How to Make Spinach and Artichoke Wonderpot – Step by Step Photos 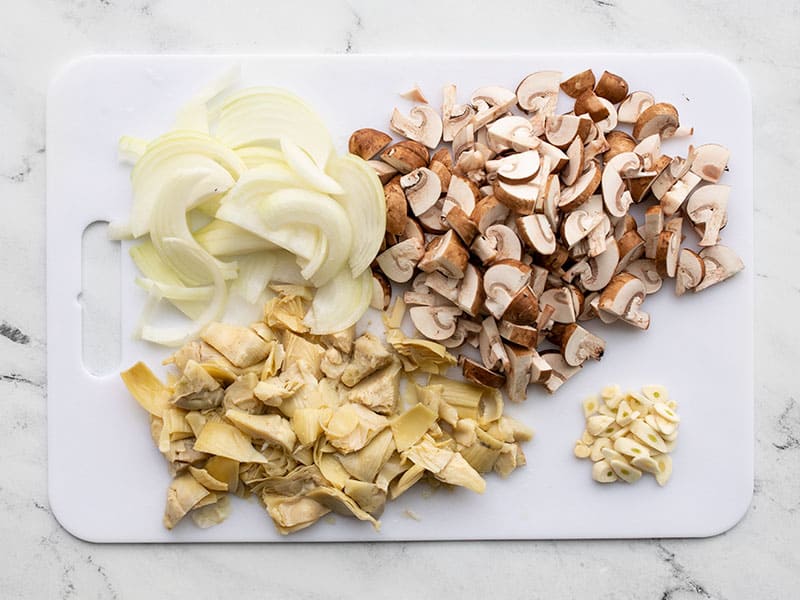 Start by prepping the veggies. Rinse and slice 8 oz. mushrooms. Drain a 13 oz. can of artichoke hearts and then just chop them up roughly so that they are in smaller, bite-sized pieces. Thinly slice one small onion and 4 cloves garlic. If you don’t want big garlic pieces, you can mince the garlic and dice the onion. 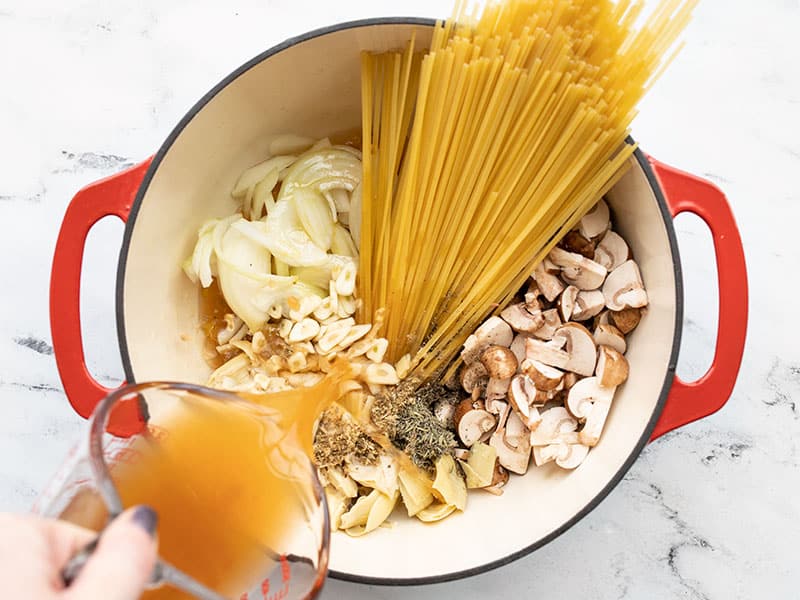 Place the sliced onion, mushrooms, garlic, artichoke hearts, 12 oz. fettuccine, 2 Tbsp olive oil, 1 tsp dried oregano, 1/2 tsp dried thyme, some freshly cracked black pepper (about 10-15 cranks of a pepper mill), and 5 cups vegetable broth. If your pot is not big enough for the fettuccine to lay flat across the pot, I suggest breaking it in half first. My pot is quite wide, so I left it whole. 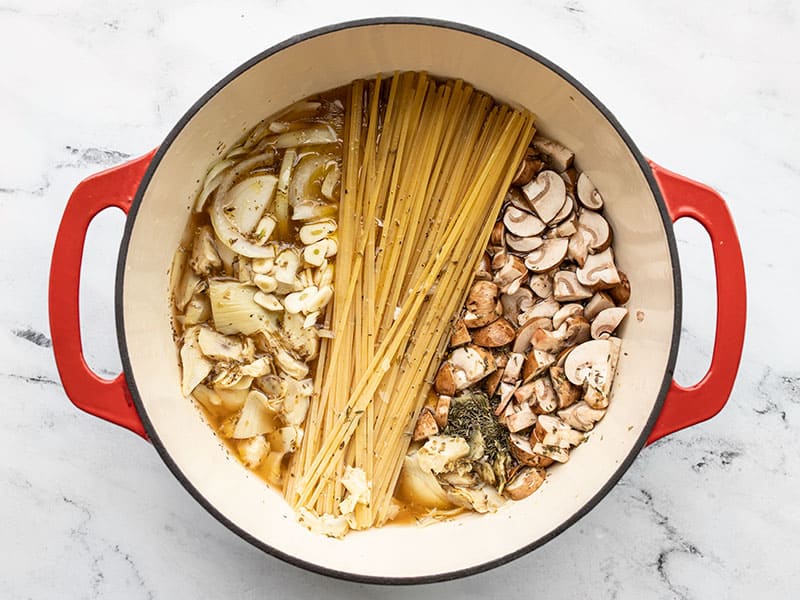 Push all of the ingredients down under the liquid as much as possible. Place a lid on top and bring it up to a boil over high heat. As soon as it reaches a boil, give it a good stir, and reduce the heat to low. 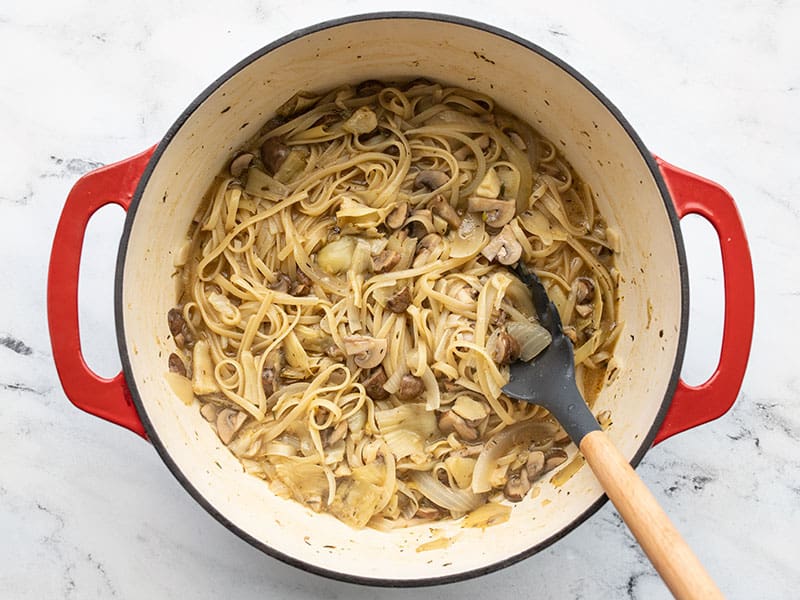 Let it simmer on low, with the lid in place, stirring every couple of minutes, for 10-15 minutes, or until the pasta is tender and most of the liquid is absorbed. Make sure the broth is simmering well the entire time, turning the heat up slightly if needed to maintain a simmer. 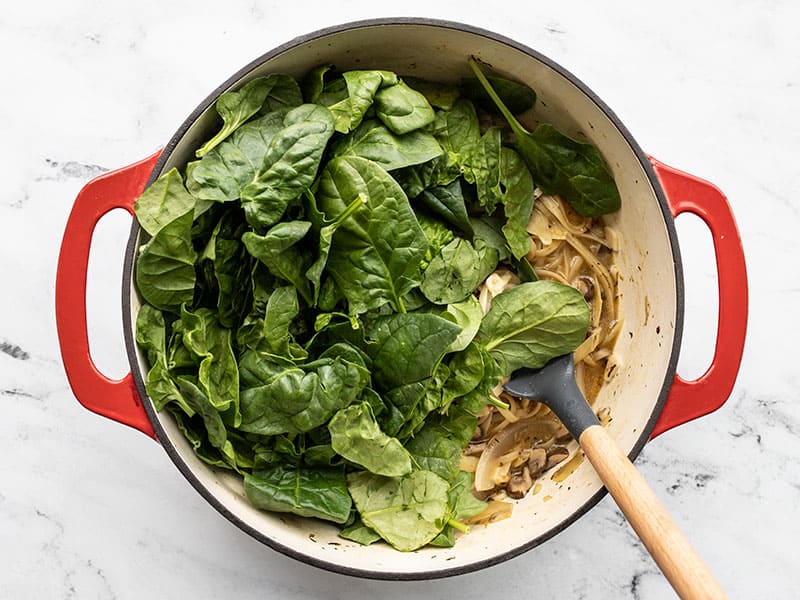 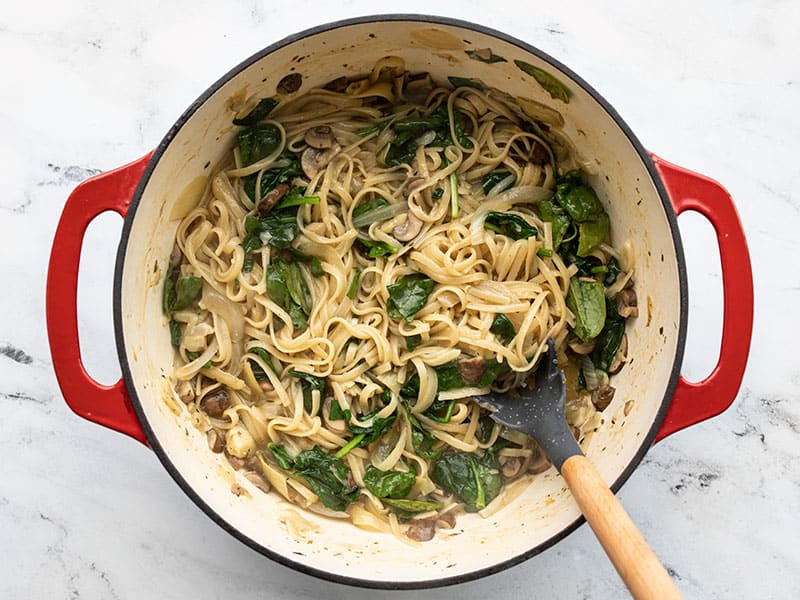 And then you suddenly have this! Amazing! Easy! Yum! It’s a WONDERPOT! 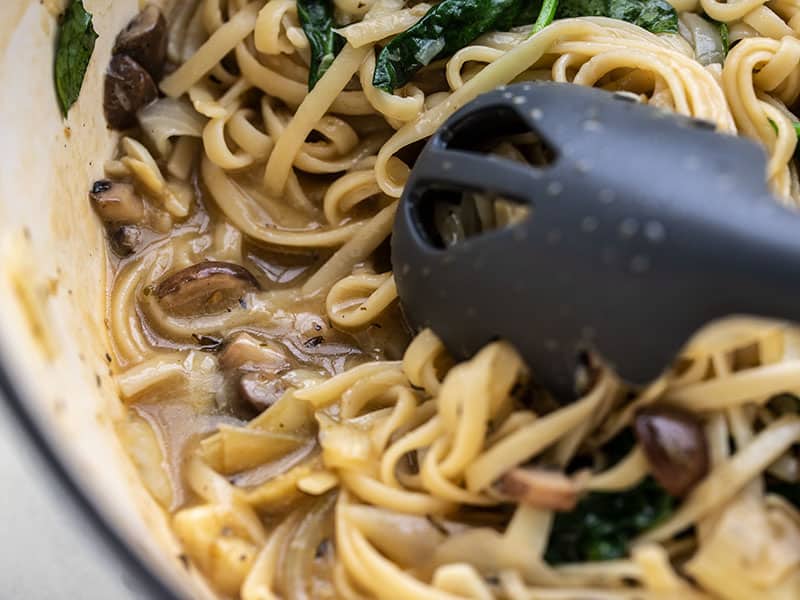 Take a closer look… see that yummy sauciness in the bottom of the pot? 👌 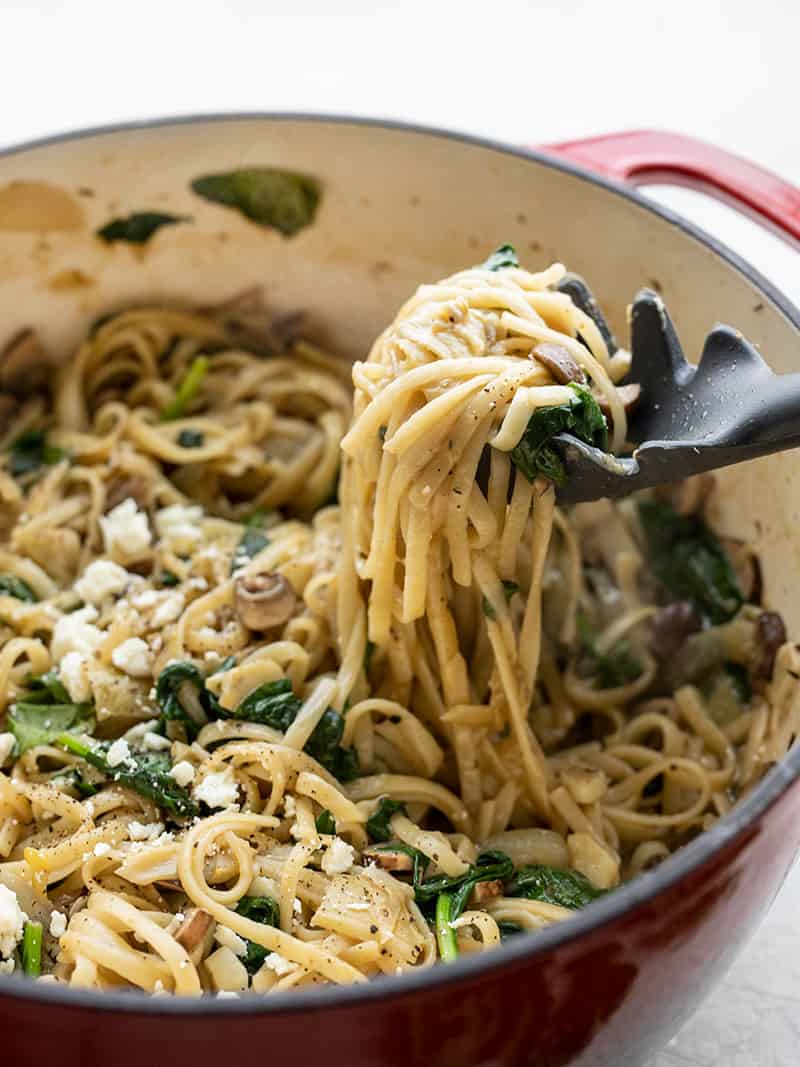 Serve the Spinach and Artichoke Wonderpot as is, or add a pinch of crushed red pepper and some crumbled feta. It’s also pretty good with Parmesan!