I had a craving for the aromatic spices of Chinese five spice blend this week, so I picked up a pork loin, mixed up a super simple marinade with the five spice, and let my slow cooker work its magic. This Slow Cooker 5 Spice Pulled Pork is saucy, slightly sweet, slightly salty, and full of warm spices. If you’re looking for a fun twist on traditional pulled pork, this is sure to hit the spot. 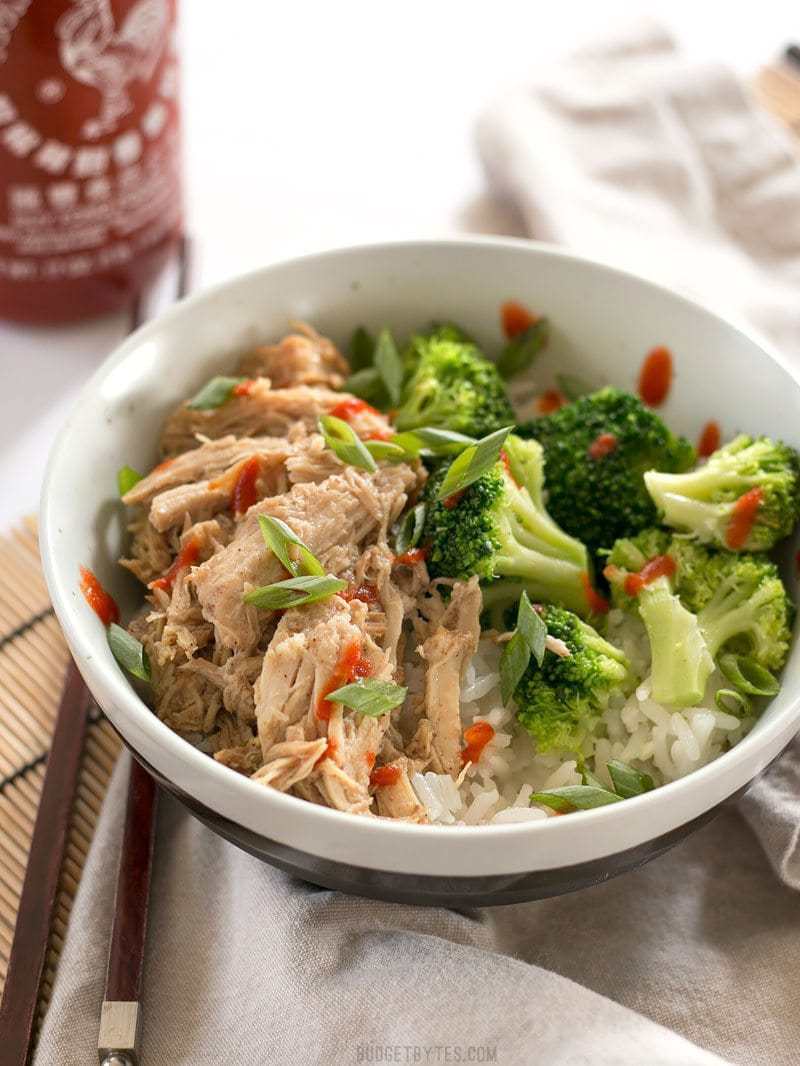 Chinese 5 spice powder is a warm, sweet, spicy and aromatic mix of spices that commonly used on meat and fish, but I also love it as a quick way to season soup (see Quickie Faux Pho). 5 spice powder usually contains cloves, cinnamon, fennel, anise, and Sichuan peppercorns. Since this blend contains spices that I don’t usually keep on hand, I prefer to buy this spice blend pre-mixed.

You can serve it just about any way you want, but I ended up serving it over a bowl of Savory Coconut Rice with a few thawed broccoli florets from the freezer (oh, and a drizzle of sriracha, of course!). You could stuff the pork into a tortilla with some kimchi for a quick Asian inspired taco, or even pile it onto a sweet Hawaiian bun for a fun twist on a pulled pork sandwich. This recipe does make a lot, but it freezes well. So eat half this week and stash half for later!

Can I Make This in an Instant Pot?

I already know some of you are wondering if it can be made in the Instant Pot. ;) I haven’t tried it yet, but I bet setting the IP on manual (high pressure) for 35-40 minutes would do the trick! After the meat is shredded and returned to the pot with the cornstarch mixture, just set it on sauté until it simmers and thickens.

5 from 14 votes
Slow Cooker 5 Spice Pulled Pork is a fun twist on a classic dish with warm spices and a hint of sweetness. Use for tacos, bowl meals, and more. 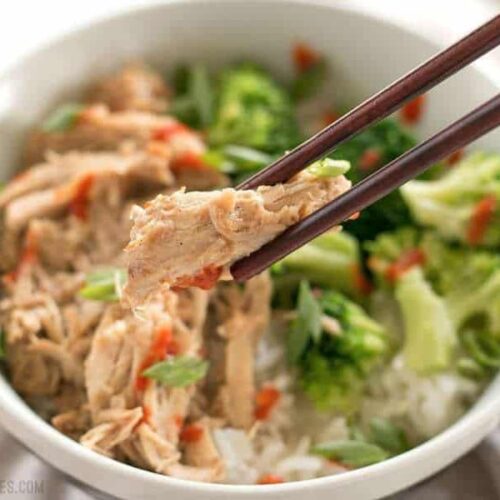 *This spice blend is also called Chinese Five Spice and is a blend of aromatic spices like anise, cinnamon, cloves, and pepper. If you can't find it in the regular baking and spice aisle, check the international foods section of your grocery store.

Don’t forget to freeze some fro later! Scroll down to see the step by step photos. 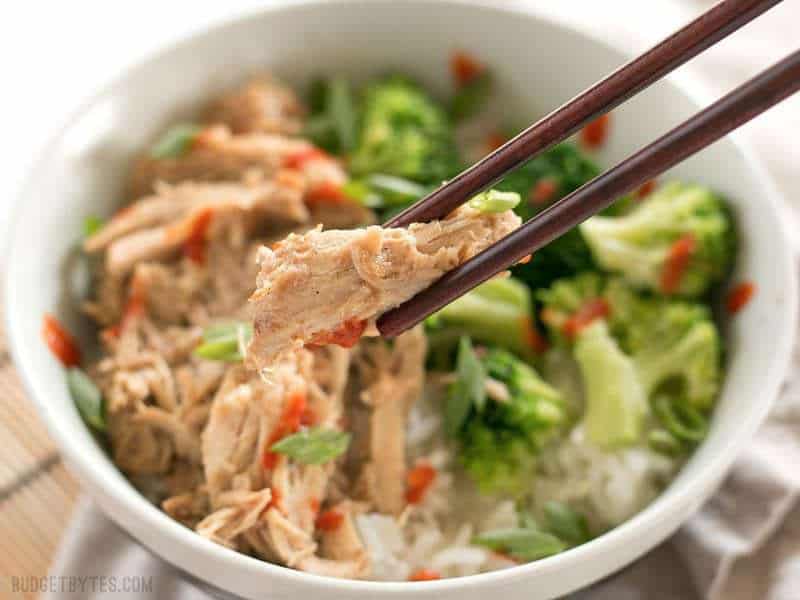 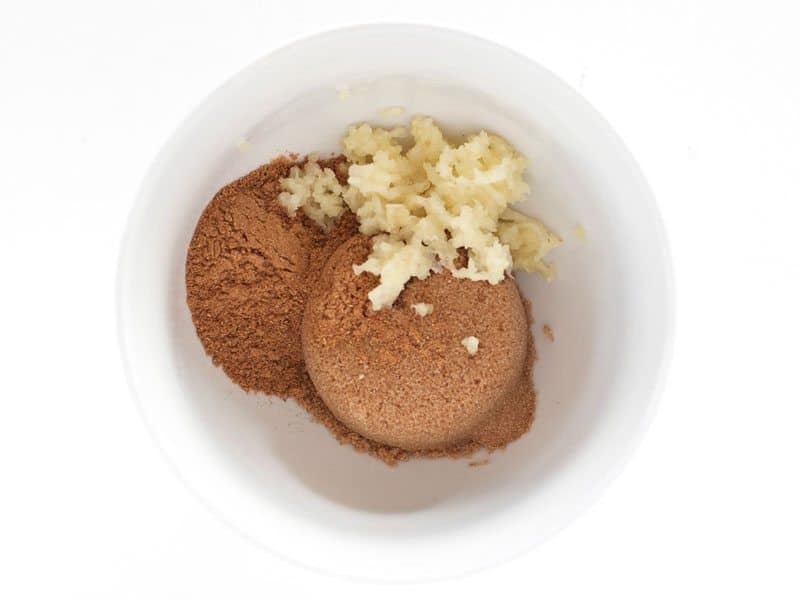 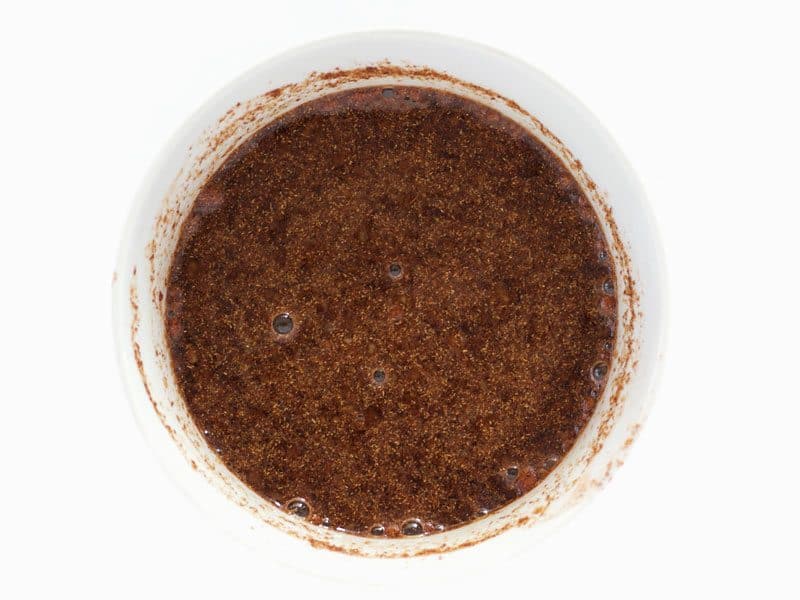 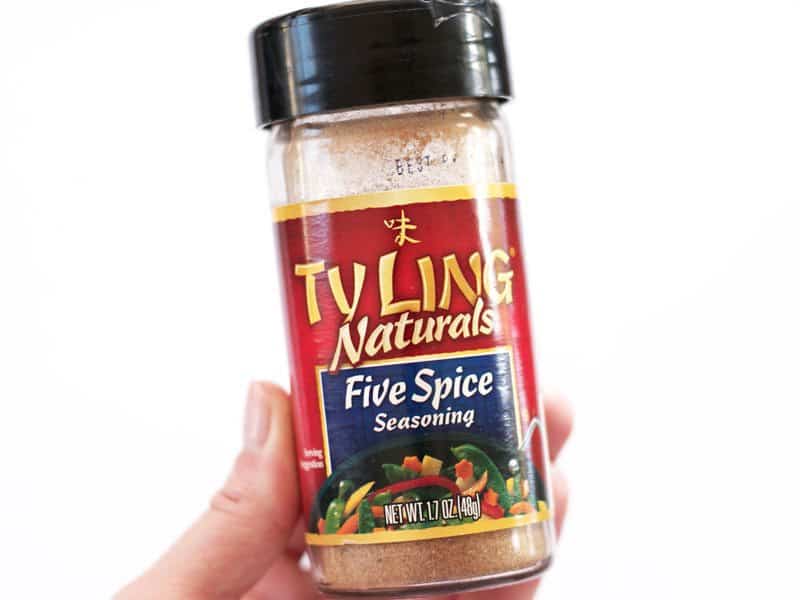 And since I know someone will ask, this is the Five spice blend that I used. :) I picked this up in the international foods aisle at my grocery store, but McCormick also makes one in their gourmet line. 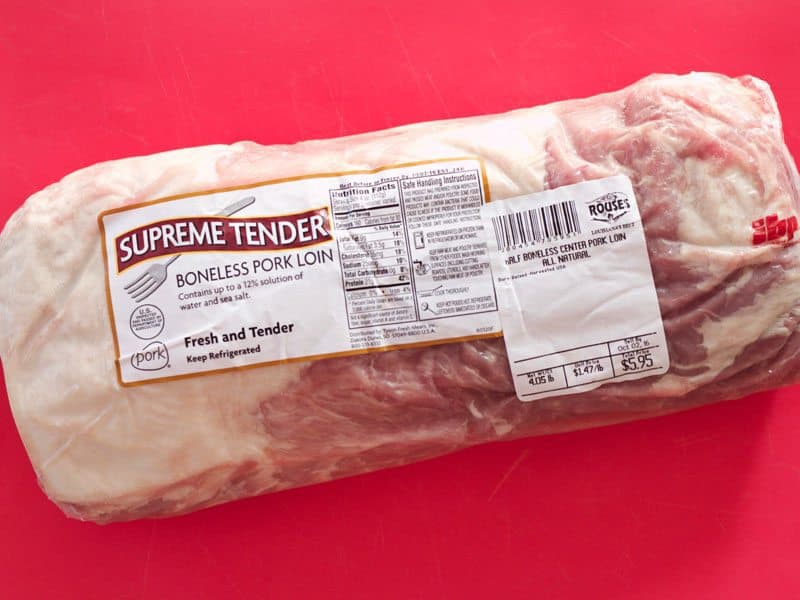 I used this 4 lb. pork loin, which is a LOT, I admit. But the meat can be frozen after it’s cooked. Trim the fat from the loin, if you prefer. I just leave it on because I like a little fat in the liquid at the end and the larger pieces can easily be pulled off after cooking. 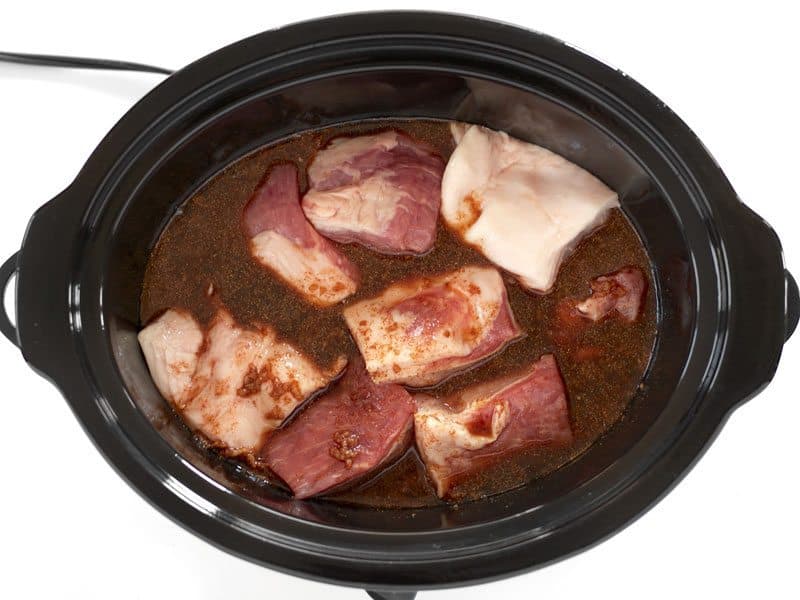 Cut the pork loin into big 3-inch chunks, then place them in the bottom of a 4-quart or larger slow cooker. Pour the prepared 5 spice cooking liquid over top. The meat will not be fully submerged, but that’s okay. Put the lid on the cooker and cook on high for 4-5 hours, or low for 8-10 hours.

After cooking, it looks like this… not too attractive, I know. See those larger pieces of fat, though? They’re easy to just pull off at this point. Some of it rendered off into the liquid, but not all of it. 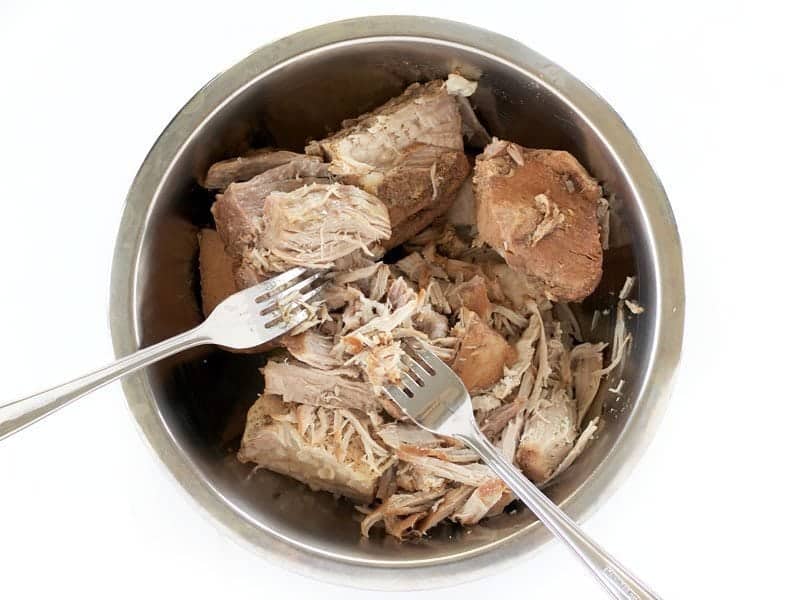 The pork should be fork tender at this point, so carefully lift it out of the liquid with tongs. Remove any big pieces of fat, then shred the meat with two forks. 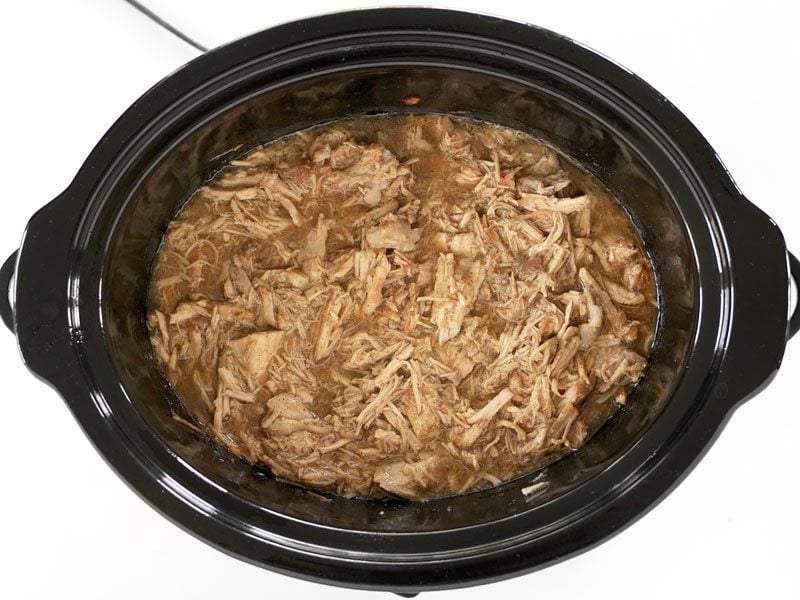 At that point it’s ready to serve! Serve over rice, in a tortilla as a taco, or in a sweet Hawaiian bun as a sandwich. If you want to freeze the meat, chill it over night in the fridge, then transfer to a heavy duty freezer bag. To reheat the frozen meat, you can tear away the bag and reheat it on low in a sauce pot (with lid), stirring often until heated through. 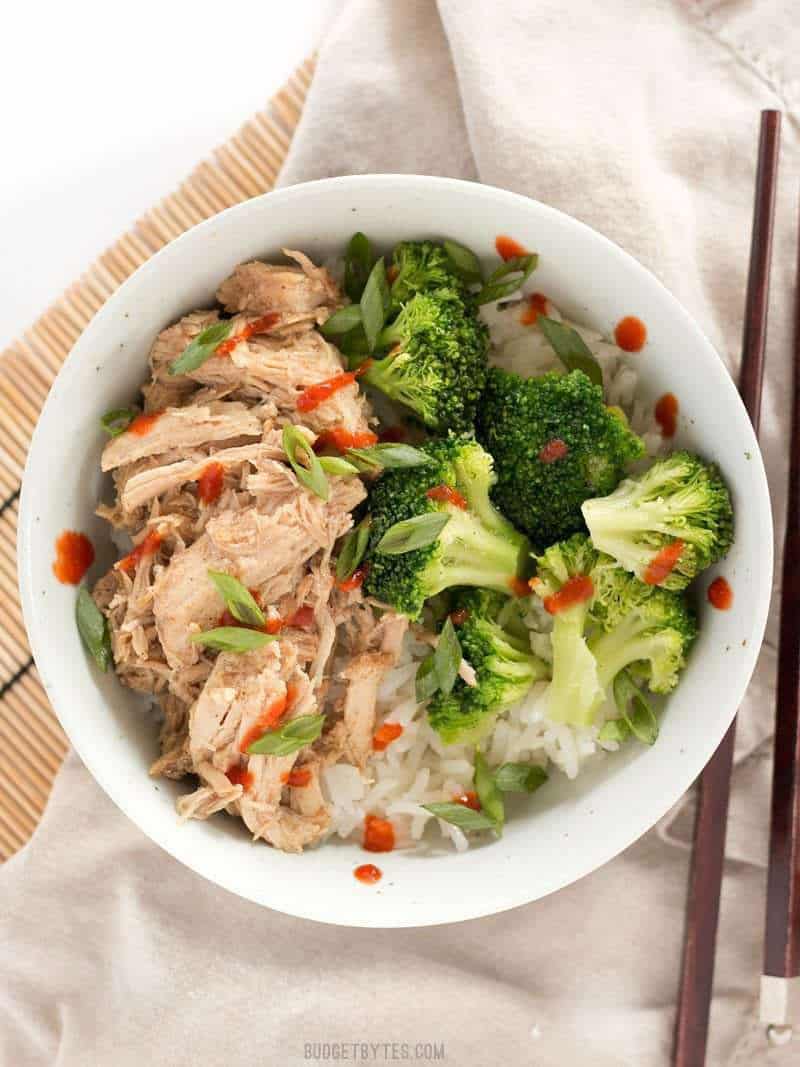