This dish is a little more fancy and expensive than the usual Budget Bytes fare, but when you compare it to the cost of a restaurant meal, it still can’t be beat.

I get a lot of inspiration from the freezer aisle. There are rows and rows and rows of “freezer meals” with pretty pictures of beautiful food that promises to be easy, quick, and filling. The only problem is that they are never as pretty or delicious as they look on the package. I got sucked in by one a couple weeks ago and was throughly disappointed. It was cod poached in a mediterranean red sauce with pasta, olives, and vegetables. What ended up on my plate was a bland red sauce, a piece of fish the size of my thumb and some soggy squash. Nary an olive in sight. I instantly thought, “I CAN DO THIS BETTER!” So, today I did.

I ended up buying tuna steaks because there was no cod and it was far less expensive than the rest of the fish at the store. Also, tuna goes great with Italian and mediterranean flavors. You want to go with a fish “steak” rather than a “filet” here because you need the thickness so that it doesn’t fall to pieces when poached in the sauce.

I expected this to make four servings but after it was all said and done, it was a lot of food and I felt like it was more like six servings. Either way, the tuna steaks came three to a package and needed to be split up because they were way too big for one serving. Of course, I did this *after* the photos so keep that in mind. Also, I took some of the photos after I already plated and ate a bunch because I wasn’t happy with my first set of pics. So, if you see only two tuna steaks in there, that’s why! ;P 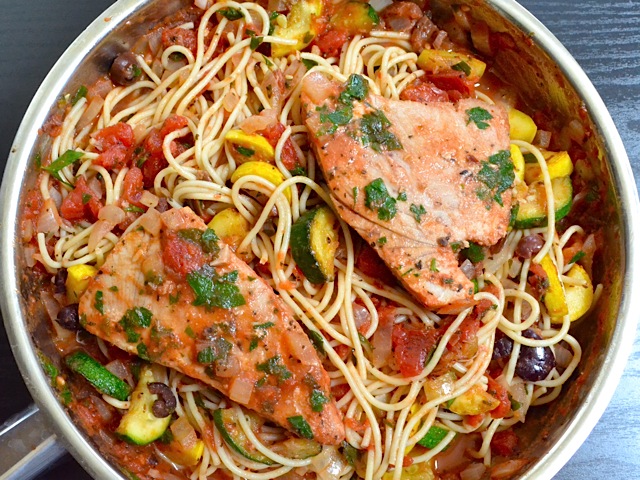 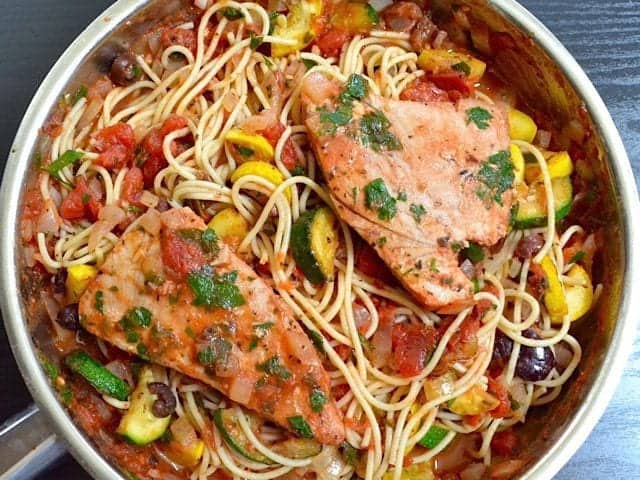 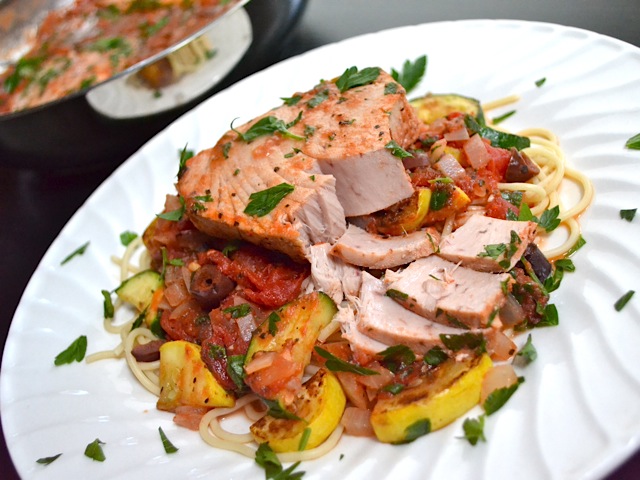 Alternatively, you can place the plain pasta on a plate, top it with sauce and then fish (as pictured here) but I find it works better to stir the pasta into the sauce. 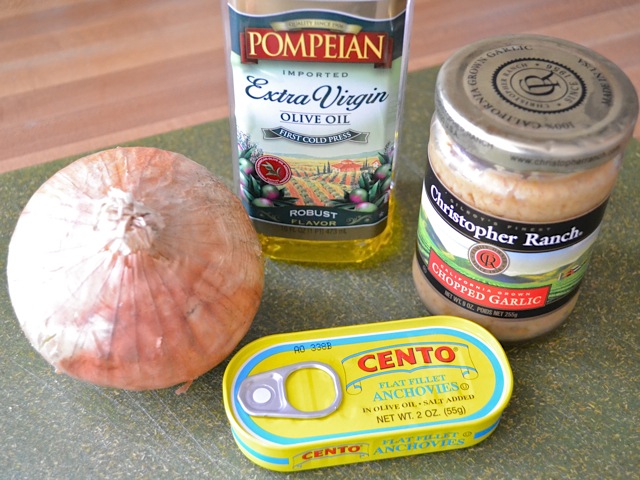 It all starts with this: olive oil, an onion, garlic, and anchovies. 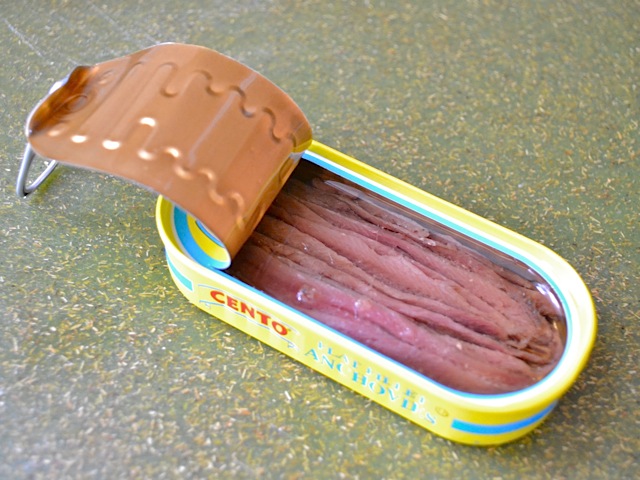 Don’t be afraid of the anchovies. Alone they have a strong flavor but when you cook them down with other things they melt in and give a nice body to the sauce without having that strong anchovy flavor. I used about 1/3 of this little can. I saved the rest because I plan on making some caesar dressing this weekend. 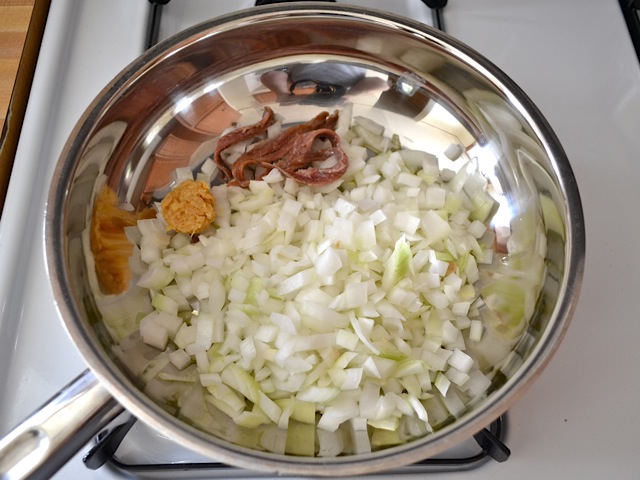 Add them all to a large skillet and cook over medium heat. 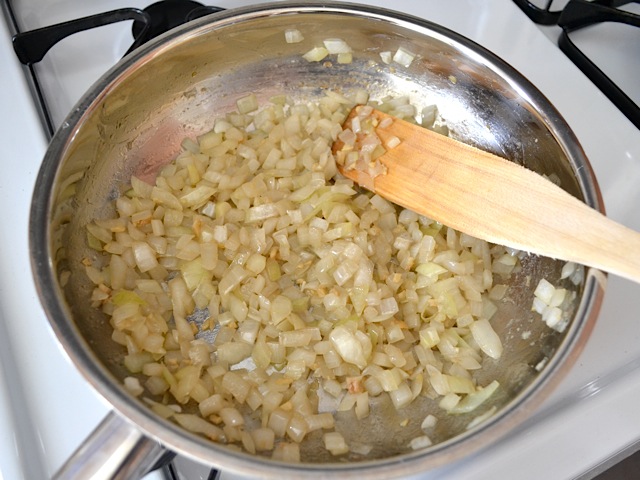 Cook them down until the onions are soft and transparent and the anchovies have dissolved in. The anchovies will lend a slightly grey color to the onions but don’t worry, you won’t see that later.

BTW, add your chopped squash here and cook until slightly softened. I completely forgot that I had the squash until later so I had to cook them separately. 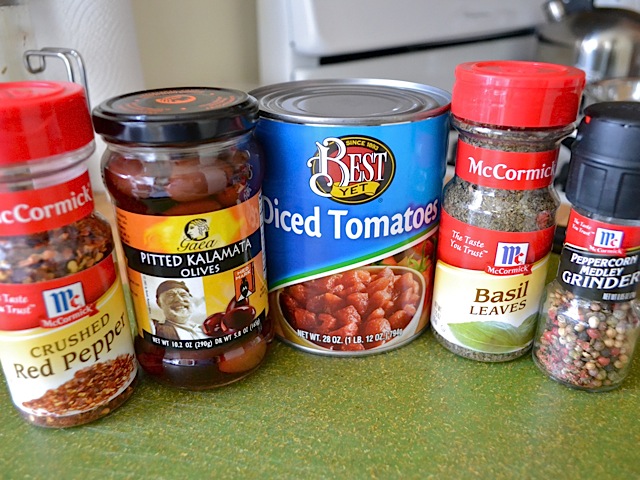 And this is what you need for the rest of the sauce: diced OR crushed tomatoes, basil, crushed red pepper, kalamata olives (I used half of this jar), salt, and pepper. 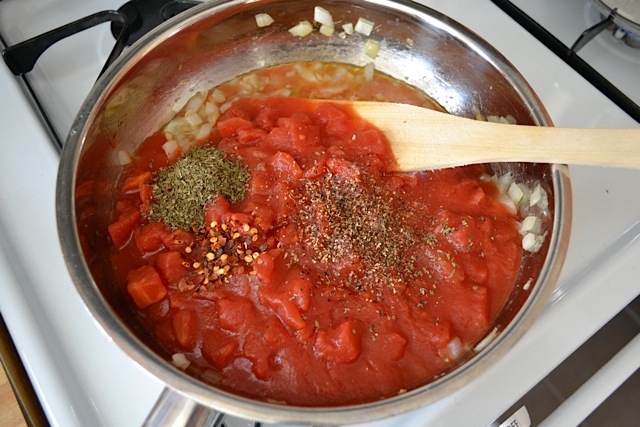 Add it all to the skillet… 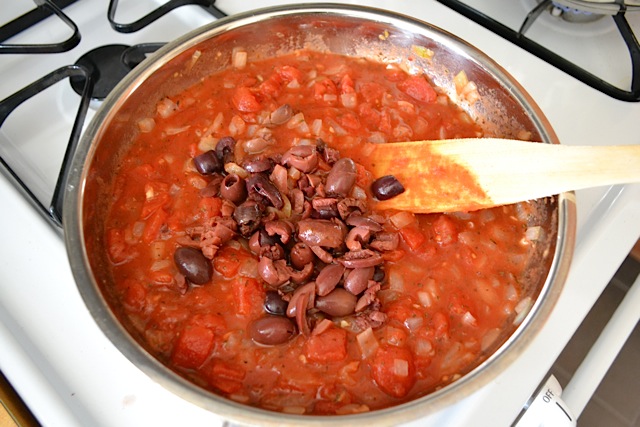 …along with the roughly chopped olives. 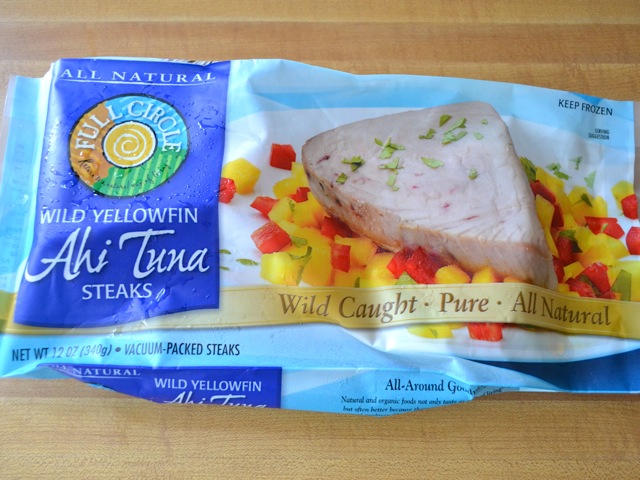 This is the tuna I bought. It was $4.99 for 12 oz. which I thought was a pretty good deal. You can use cod or any other thick cut of fish. …except maybe not salmon. I don’t think the flavor of salmon would work well here. 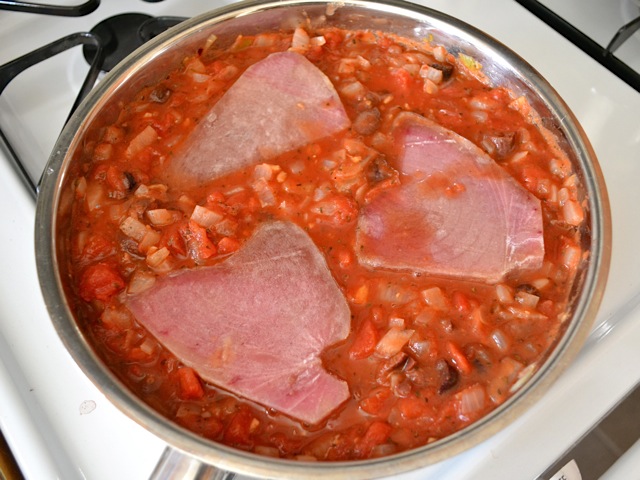 Nestle the tuna into the sauce, place a lid on top and let it simmer until cooked through. Mine was frozen so it took about 10-15 minutes to cook. If you have thawed or refrigerated fish, it will probably cook in half the time. 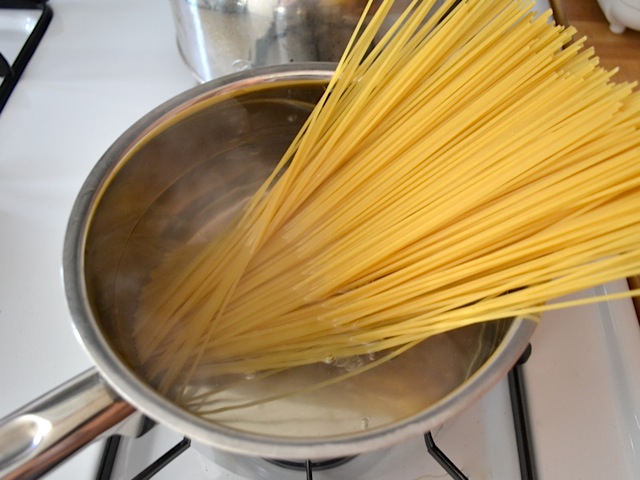 At this point, start cooking your pasta. 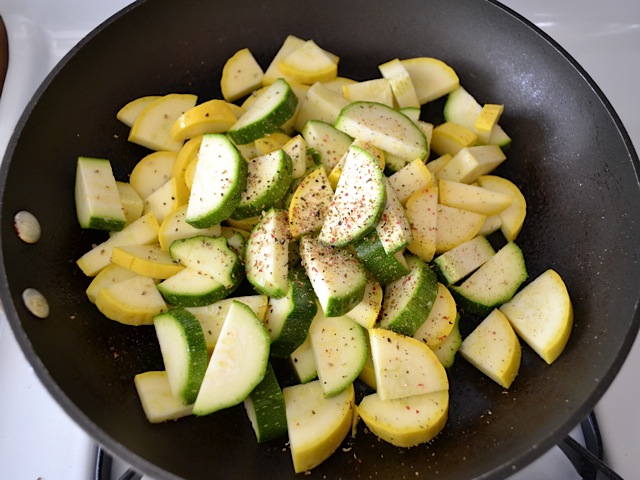 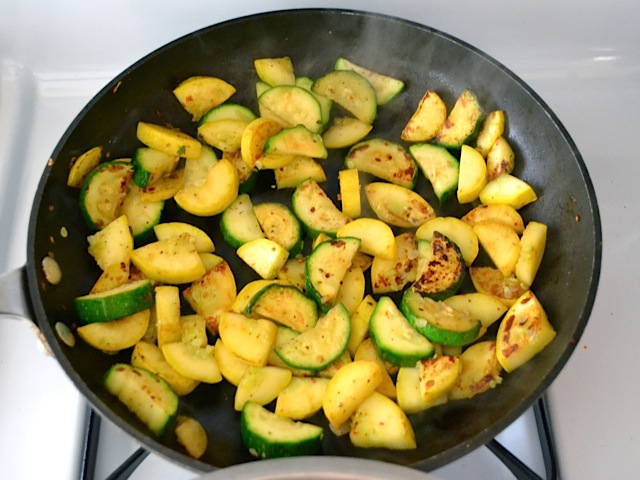 This is when I realized that I completely forgot the squash. So, I hurried up and sliced the squash, tossed it into a skillet with salt and pepper and satueed it up. I added it to the sauce at the end. Normally, you would just add the squash to the skillet once the onions and anchovies have cooked down, cook it for a few minutes and then continue on with your sauce as normal. 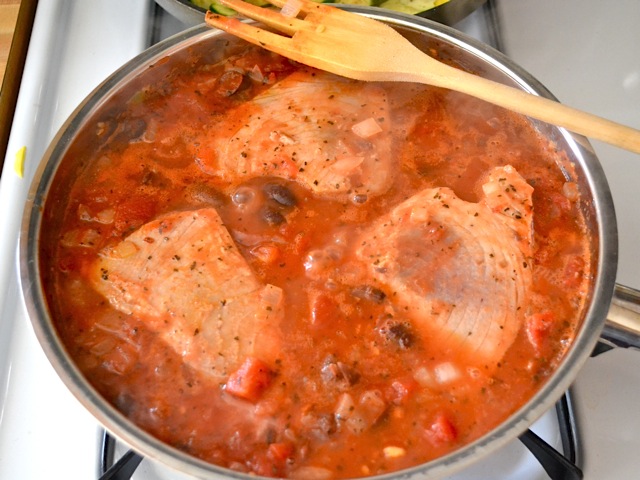 You can tell the tuna is done by its color. See the steak on the right? It’s white around the edges but still pinkish/mauve in the center. It’s not quite done. Keep it simmering till they’re all white. This poaching method is nice because the fish won’t dry out or over cook. It stays moist and tender! 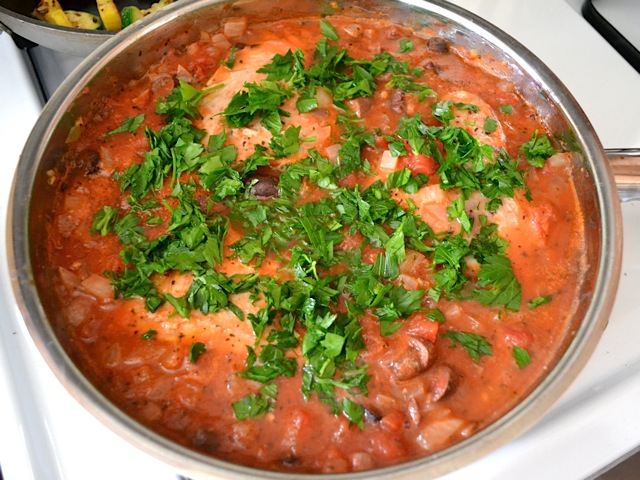 While you’re waiting for the fish and pasta to cook, chop up about a handful of fresh parsley and add it to the sauce. 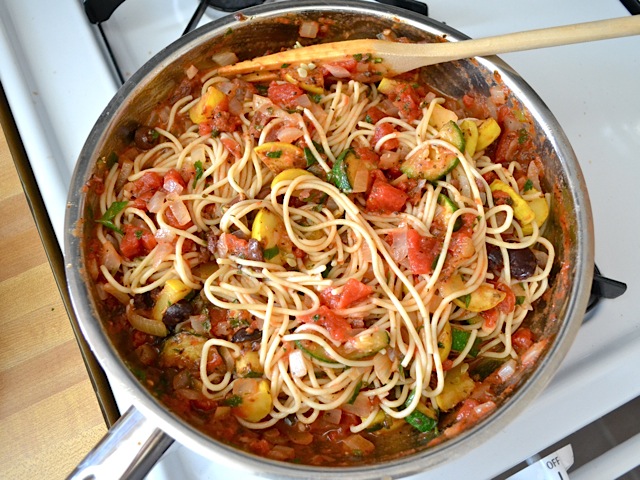 When the fish is finished, gently lift it out of the sauce and stir in the drained pasta (and cooked squash, in my case). 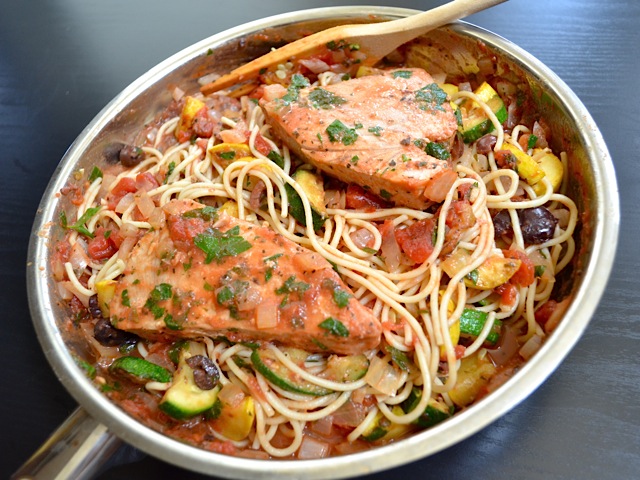 Serve the pasta with the poached fish on top! (There are only two steaks here because I already at half and plated some for pictures when I took this photo :P)