Somebody brought some BBQ ribs into the break room at work last week and I was instantly like, “Oh yeah, I definitely know what I’m cooking this weekend…” There was just no doubt about it, I WANTED RIBS!

So most people cook ribs on an actual grill but I don’t have one of those right now. Most people who don’t have a grill cook them slow and low (heat) in the oven. I didn’t want my oven eating up gas for three hours so I opted for the slow cooker. Sure, the slow cooker needs to run for a good 8 hours but it is so much smaller than my oven that I figured (or hoped) that it was the more energy efficient option. Plus, it’s just so SO easy. Just put everything in the pot and let ‘er rip.

For the slow cooker to transfer heat to your food properly, you want to fill the cooker at least half way and use plenty of liquid. This is the slow cooker I used, it’s 5 quarts and my rack of ribs and onion filled it about half way. For liquid, I ended up using some apple sauce and a little water (the apple sauce wasn’t quite as liquidy as I had anticipated). I wanted to use Guinness Stout as my liquid but, of course, I happened to be shopping the day after St. Patty’s day and they were out of Guinness singles. You can also use apple juice, orange juice or broth. Just make sure there is enough liquid to fill in all of the spaces between the meat. The liquid is the heat transfer medium. Very important.

Anyway, the end result of this slow cooker process are ribs so succulent, juicy and tender that you’re likely to eat the entire rack if you don’t exercise extreme restraint. I cut my ribs into portions of two ribs prior to cooking. This also helped them fit nicely in the slow cooker. Yeah, two ribs is a pretty small portion but if you beef up your meal with lots of inexpensive and healthy sides (like beans, greens and mashed potatoes), two ends up being plenty. If you do decide that four ribs is a more realistic serving size, it’s still only $3.66 per serving… way less than in a restaurant for sure, which only makes them taste that much BETTER! 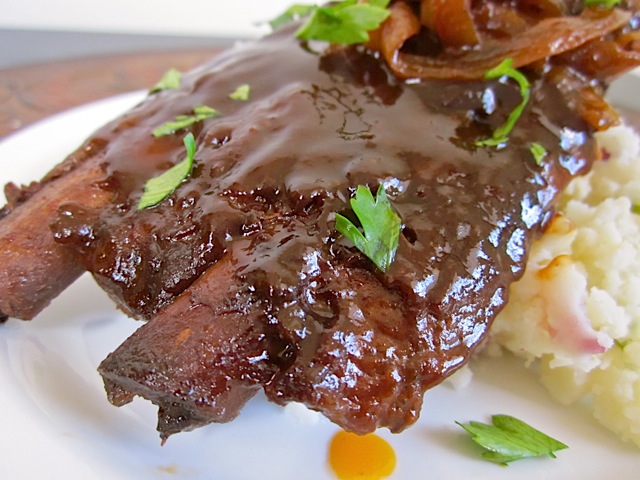 The left over liquid in the slow cooker can be simmered in a pot over medium low heat until reduced and thickened. The thickened sauce can then be served as a gravy over the ribs. 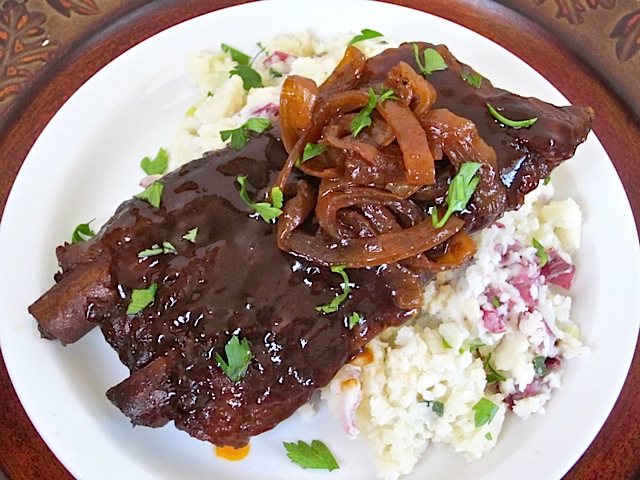 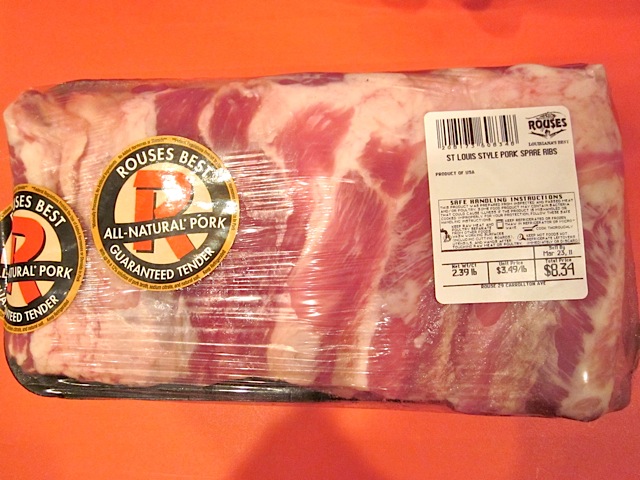 These are the ribs that I purchased. They are called “St. Louis Style Pork Spare Ribs.” There were twelve ribs in the pack (the rack is folded over on itself in the package). 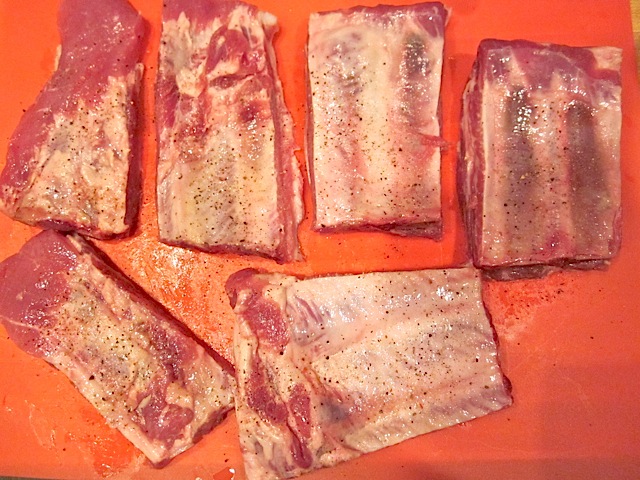 I cut the rack into two rib portions so they would be easy to fit and arrange in the slow cooker (and so that I wouldn’t have to portion later). Season the ribs with salt and pepper. 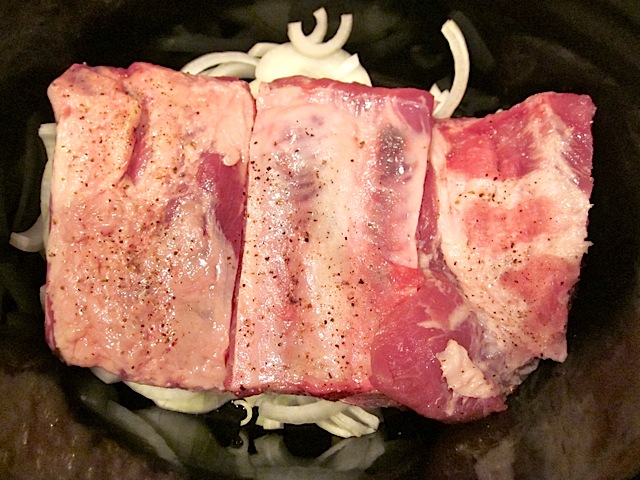 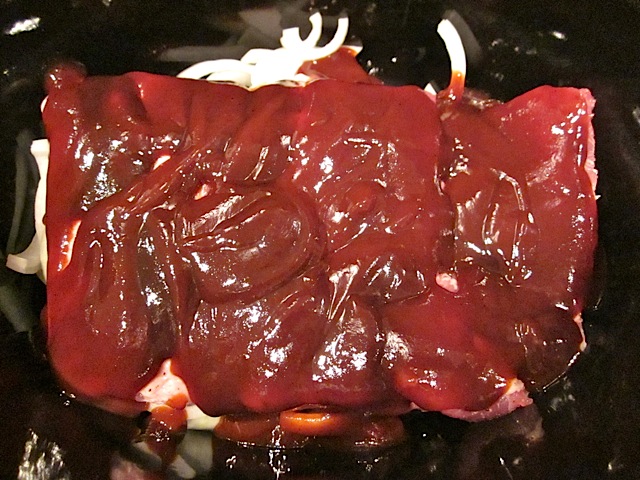 Pour about half of the bottle of BBQ sauce on top of the first layer of ribs. 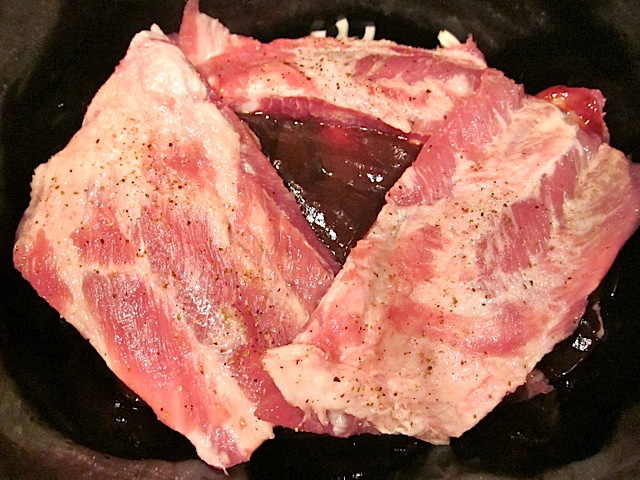 Arrange the rest of the ribs on top. 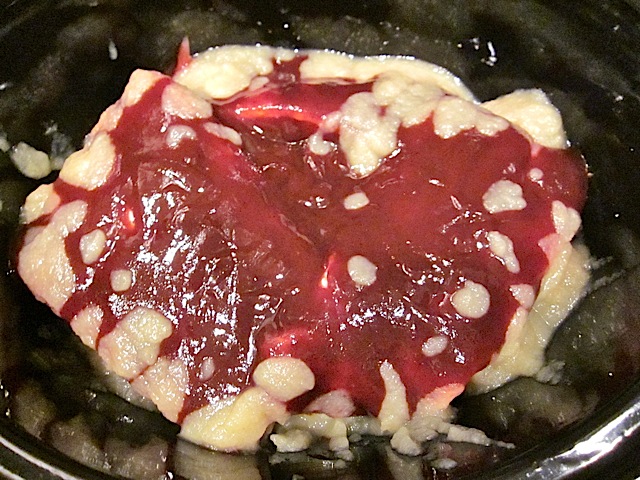 Pour on the rest of the BBQ sauce. Pour your liquids down around the edges so that they fill in the empty spaces between the meet and onions. I used apple sauce and then had to add a little water as well. You can use juice (apple or orange) or a dark beer. Just make sure there is enough liquid to come up to the top of the meat. 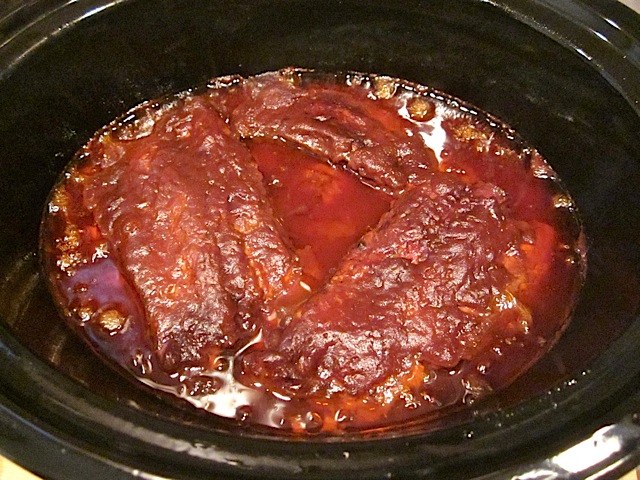 Secure the lid tightly on the slow cooker, turn it on low heat and let it cook for 8 hours. This is what you’ll have in the end. Looks and smells too good to be true. 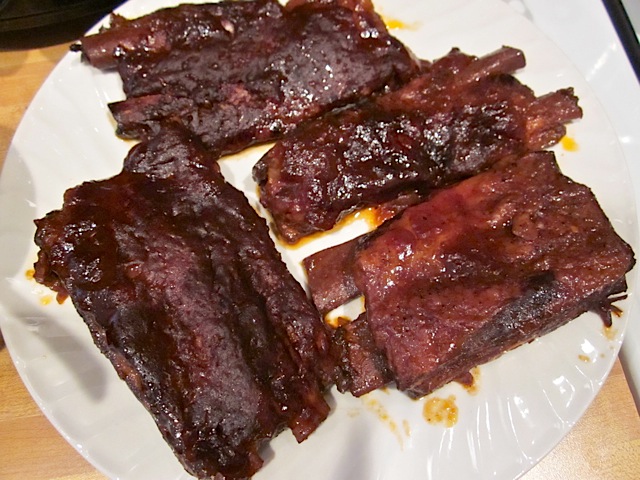 Carefully lift the ribs out of the pot (this is only some of them). The top layer will probably have more sauce stuck to the meat than the bottom layer that was down in the liquid. See the ribs on the far right? Those were on the bottom layer and are not quite as saucy. If you have more sauce, you can brush it on after cooking or make a pan sauce with the left over liquid in the slow cooker. 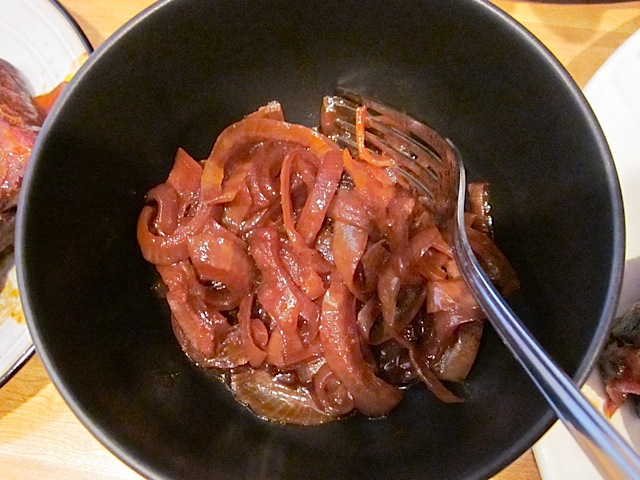 Don’t forget to fish out those yummy onions. 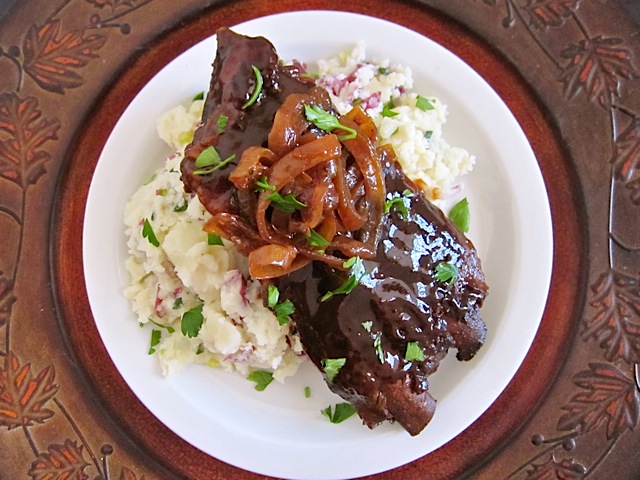 The first year that I bought my slow cooker I barely used it and definitely second guessed the purchase. Now I know that it’s a totally awesome and effortless way to cook beans, soups and meat and I love it. Love it, LOVE IT. A very well spent $20.