Roasted red peppers are one of my favorite things on earth. They’re sweet, smokey, and full of flavor. I like to blend them into hummus, toss them onto pizzas, salads, sandwiches, and more. The problem is that they can be kind of expensive.

Normally I can find a jar of three whole peppers for around $2.00, which is often less than fresh red peppers cost in my area, but when I find a deal on fresh red peppers, I like to roast them myself because they taste so much better. Even better yet, you can freeze the peppers after roasting so that you have them on hand whenever you want to use them.

I got a fantastic deal on peppers last week, so I roasted up six peppers using two different methods. First, I roasted a few over the open flames of my gas burner, then I roasted three more using my broiler in the oven (you can do this with either a gas or electric broiler). Although I first learned the gas burner method in the restaurant biz, I think I like the broiler method better. It roasted more evenly, required less babysitting, and the skin came off easier. I’ve included step by step photos of each method below, so you can decide for yourself :)

How to: Roast Red Peppers

Regardless of which method you use, you’ll want to coat the outside of the peppers with a little oil. Just smear a teaspoon or so over the surface of each pepper. I used olive oil, but you could use any oil that is stable in high heat (vegetable, canola, peanut, etc.). 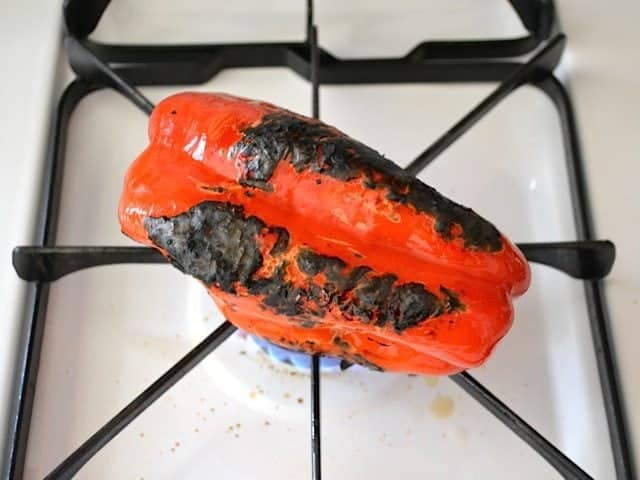 Turn the burner on to high and set the oiled pepper right on top. Allow the pepper to blacken on one side, then use tongs to turn the pepper. Let the pepper fully blacken on all sides. You want the peper to blacken even more than this pepper is in the photos. All of the black, burned skin will be removed later, leaving a tender, smoky flavored flesh. The pepper will spray a bit of juice onto the cook top, which is one reason I didn’t like this method. The juice burns and then is kind of difficult to clean off. 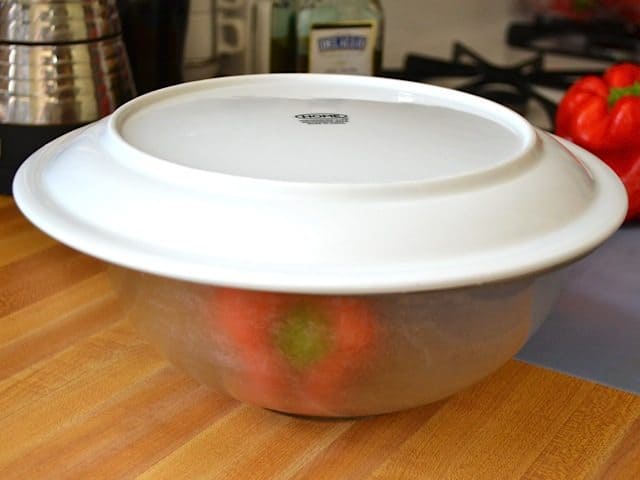 After the pepper is blackened, place it in a heat proof container with a lid. This will trap the steam and help separate the skin from the pepper. Leave it in there for about 15 minutes, or until it is cool enough to handle. I just used a large glass bowl with a plate inverted over top as a lid. 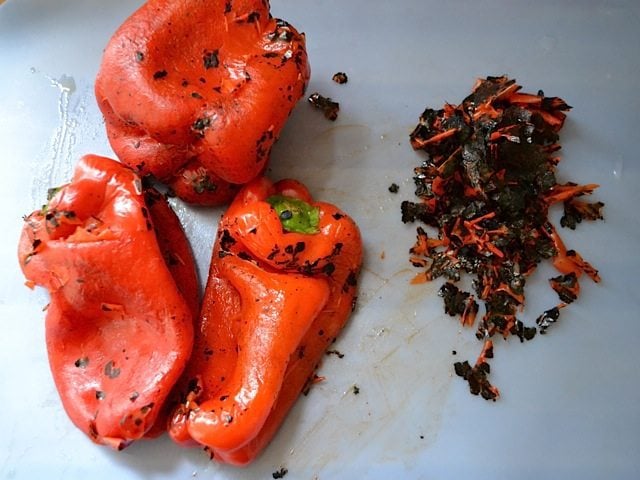 Once the peppers are cool enough to handle, simply rub or peel off the skin. It should come off easily. If the peppers were not blackened enough, the skin will be difficult to remove. It’s REALLY important to make sure the peppers are cool before you begin because they will be full of juice that can burn you if not cooled sufficiently. At this point you can just pull off the stem, remove the seeds, slice them up and use them however you’d like. (See instructions for freezing below) 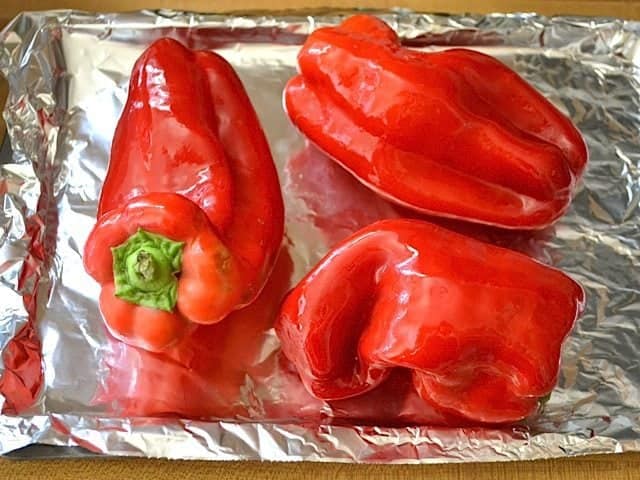 Coat the peppers in oil, just like with the gas burner method. Place the peppers on a baking sheet covered with foil. Adjust your oven rack so that the top of the peppers will be a few inches from the broiler. A lot of broilers are at the top of the oven (the heat element hanging from the top inside the oven), but some are in a drawer underneath the oven – that’s how mine is. A broiler works just like a grill. You place the food very close to a source of heat to cook it quickly.

Cook the peppers until well blacked on one side, turn the peppers and cook until blacked again. Repeat this until all sides are blackened. The amount of time needed to blacken the peppers will depend on how close the peppers are to the broiler, if the peppers were cold before beginning, and the size of the peppers. Mine took 8 minutes on each side, but they had been in the fridge just prior to broiling. I would suggest taking a peek at them every three minutes to check the progress.

Place the peppers in the covered dish until cooled, just as before. 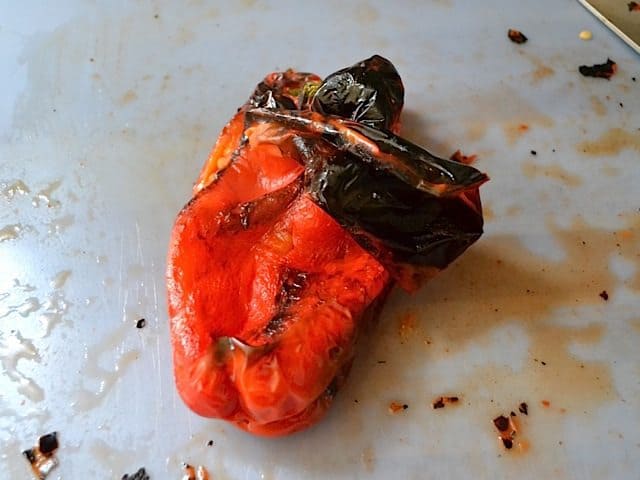 The skin of the peppers roasted under the broiler peeled off in nice big sheets. So easy. Remove all of the skin, just as before.

Of course I can’t use six whole roasted peppers within a few days, so I froze them instead. 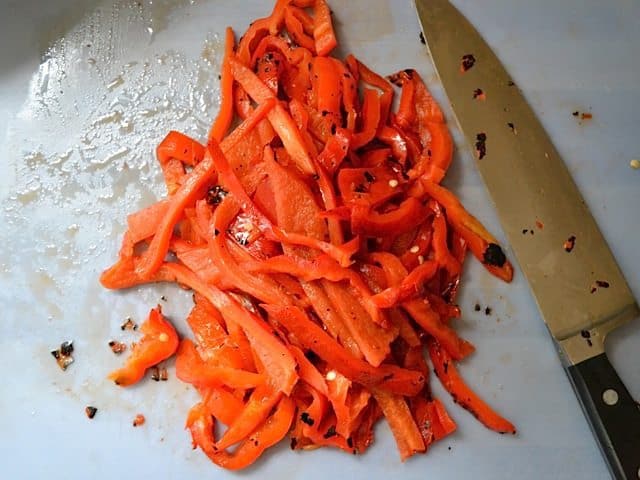 Remove the stem, seed pod, and scrape out the seeds from the iside of the pepper. Do this over the sink or garbage can because the peppers will be filled with juice. You can leave the peppers whole after removing the seeds, or slice them up like I did. 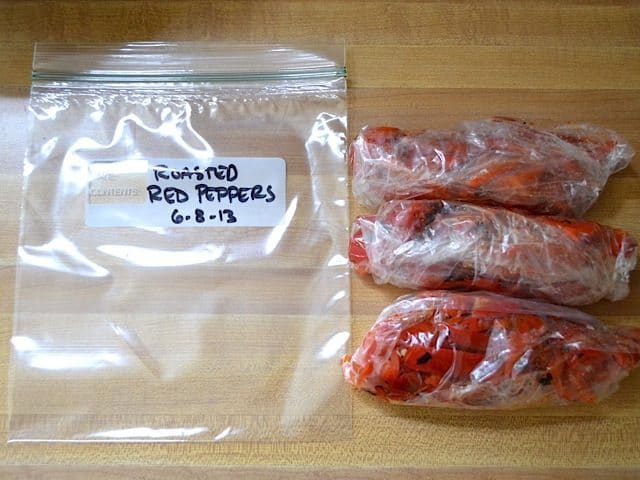 Divide the peppers up into one-pepper portions so that you don’t have to thaw the whole pack when you want to use some. I used those small fold-top sandwich bags to divide the peppers up. Then, place the divided peppers into a freezer-grade storage back to keep air and freezer burn out. When you want to use some, simply take one little bundle out and let it thaw! It should thaw quickly seeing as it is such a small portion.

Try to use the peppers up within 4-6 months as they can tend to dry out in the freezer when stored for extended periods of time, even when wrapped well.