OMG yum yum yum! This recipe is an instant new favorite! I’ve been all about the skillet and one-pot meals lately because I’m super busy, so today I made this Greek Turkey and Rice Skillet, which is like a deconstructed version of my Greek Turkey Burgers. The recipe is super simple and uses small amounts of super flavor potent ingredients, like feta and Kalamata olives, to deliver a big flavor punch without driving the price way up. 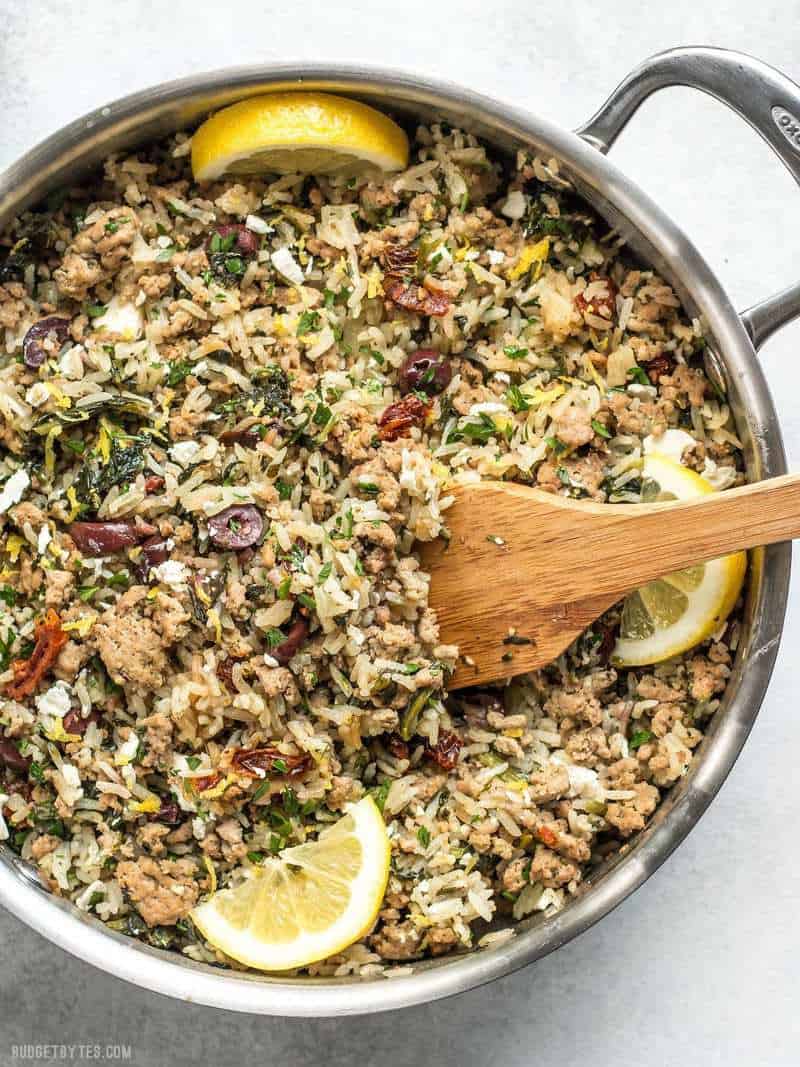 I went a little lower on the carb to meat ratio than I usually do, which made the final cost per serving a bit higher, but that’s what fit my needs today. You can make this a super low carb meal by eliminating the rice and broth, doubling the spinach, and adding in some fresh diced tomatoes at the end (you won’t need to simmer since there’s no rice to cook, just stir and cook until heated through). A can of white beans or garbanzo beans would also be nice in there.

I love using small amounts of feta (and I’m talking small, like 1 oz.) to really punch up the flavor in recipes, but you can’t usually buy just one ounce of feta at a time. So, I buy an 8 oz. block of feta, cut it into four 2 oz. cubes, and freeze them. They thaw fairly quickly at room temperature and then I can use one or two ounces as needed. Like other cheeses, feta does get more crumbly after the freeze/thaw cycle, but I always crumble it over my dishes anyway so it’s not a problem. :)

Just another couple of quick notes about this one skillet cooking method. You must have a quality thick bottomed pot for this to work. If it heats unevenly you may have some rice that gets scorched while other rice remains uncooked. If you often have trouble with cooking rice or these one pot methods, try cooking the rice separately in the broth, then combining it with the other ingredients in the skillet after cooking. 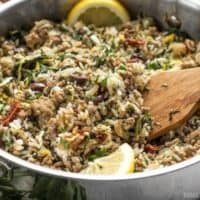 *I use Better Than Bouillon to make my broth as needed.
See how we calculate recipe costs here.
Tried this recipe?Mention @budgetbytes or tag #budgetbytes on Instagram! 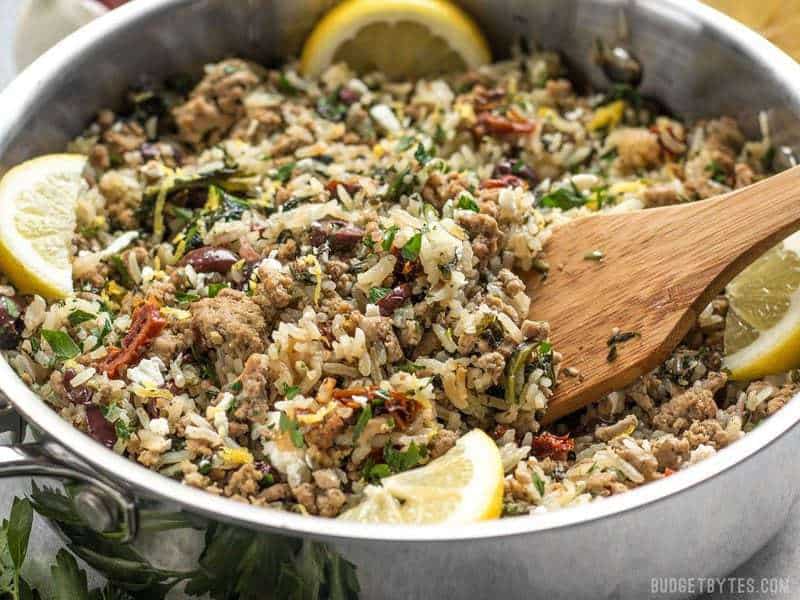 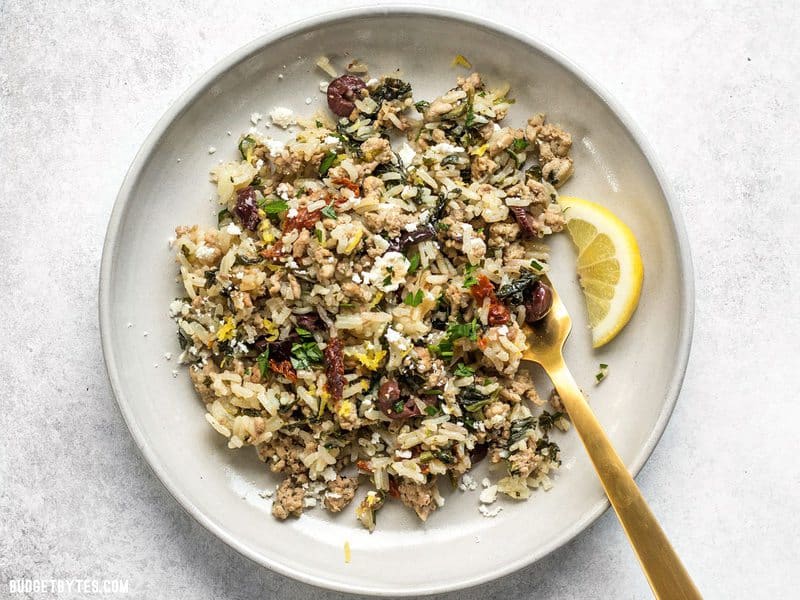 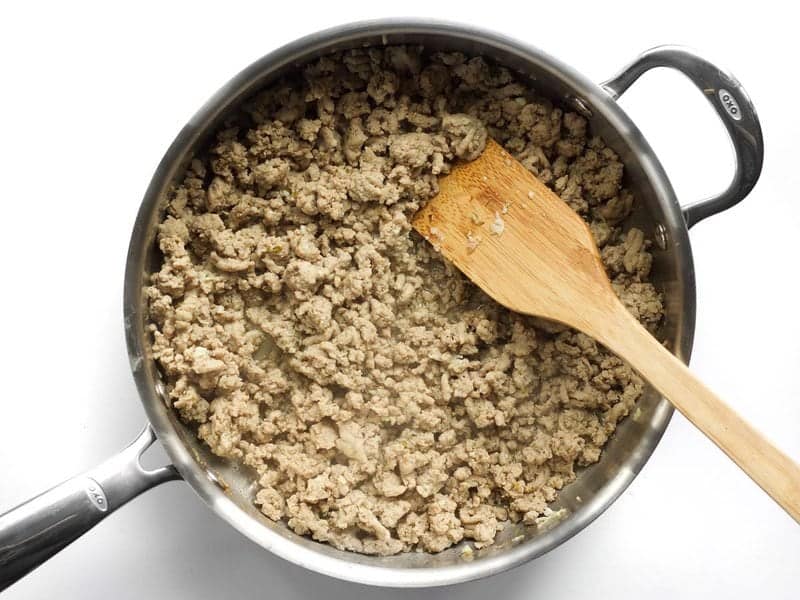 Begin by adding 1 Tbsp olive oil and 2 cloves of minced garlic to a large deep skillet. Sauté over medium heat for about one minute, then add 19oz. ground turkey (97% lean), 1 tsp dried oregano, 1/4 tsp salt, and some freshly cracked pepper. Continue to sauté until the turkey is cooked through. I used Honeysuckle White ground turkey, which inexplicably comes in a 19oz. package. 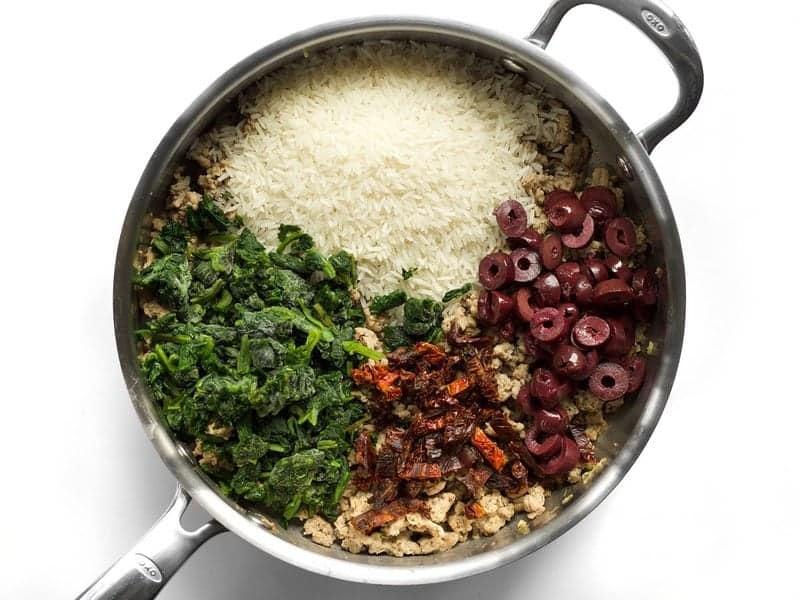 To the cooked turkey add 1 cup uncooked long grain white rice, 1/4 lb. frozen cut leaf spinach (no need to thaw first), about 1/3 cup dried tomato halves (about 7 pieces) sliced thinly, and about 1/2 cup Kalamata olives (sliced). I use sun dried tomatoes that are *not* packed in oil. I get them in little bags in the produce department and only use a small handful at a time in recipes. The rest store easily in my pantry. 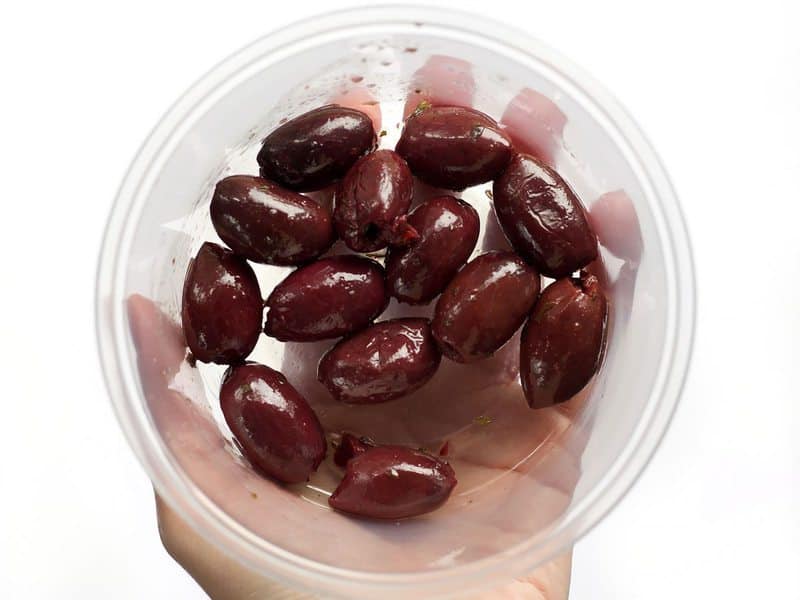 Instead of buying a whole jar of olives, which usually runs $6-$7 dollars, I just grabbed a handful from the olive bar in my grocery store. I did a price calculation to compare the price per pound for the olive bar vs. the jar olives, and they were almost the same, so I opted for the “no leftovers” choice. 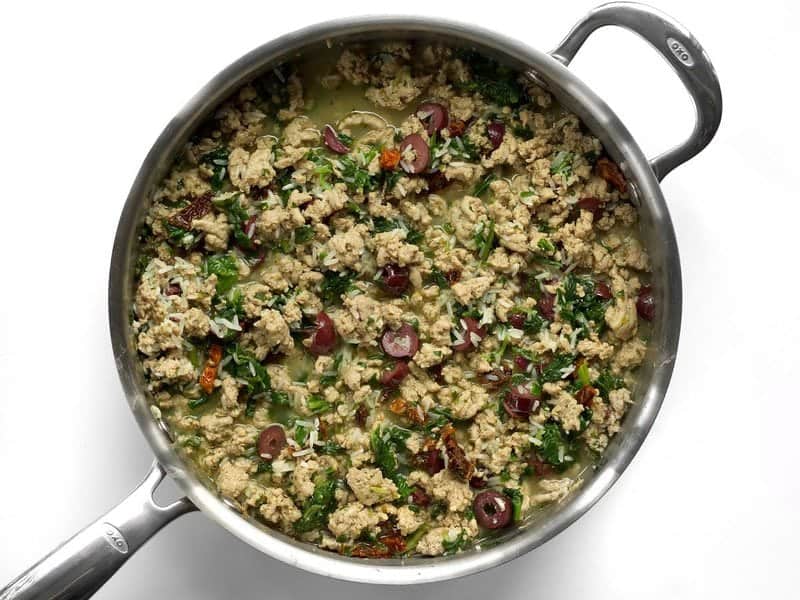 Also add 1.5 cups chicken broth to the skillet, then give everything a good stir until the ingredients are evenly combined. I use Better Than Bouillon to mix up the exact amount of broth that I need for recipes and the jar of concentrate stores easily in my fridge without spoiling. Super convenient. 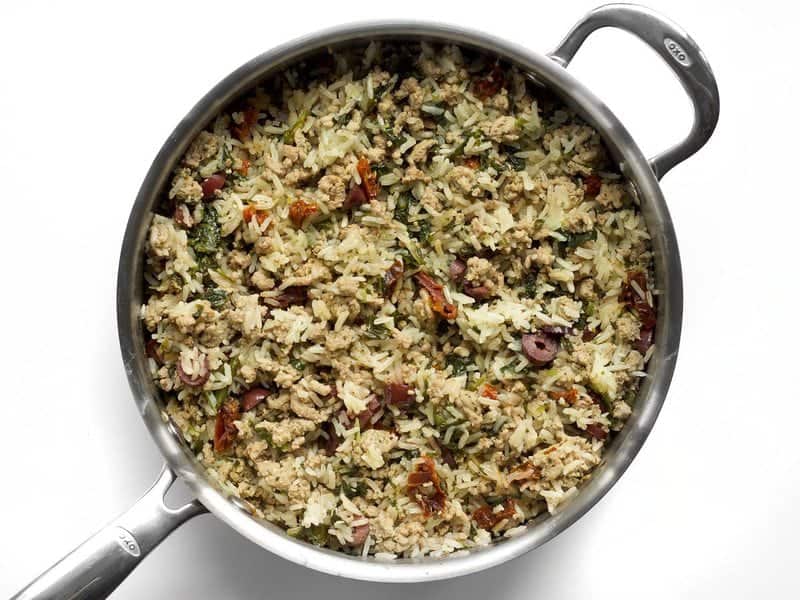 Place a lid on the skillet, turn the heat up to medium-high, and allow the broth to come up to a boil. Once it reaches a boil, turn the heat down to low or medium-low (the lowest temp where it maintains a gentle simmer), and let it simmer for 15 minutes. After 15 minutes, give it a quick stir, replace the lid, turn off the heat, and let it sit for an additional 10 minutes. After that the rice should all be tender and the broth completely absorbed. 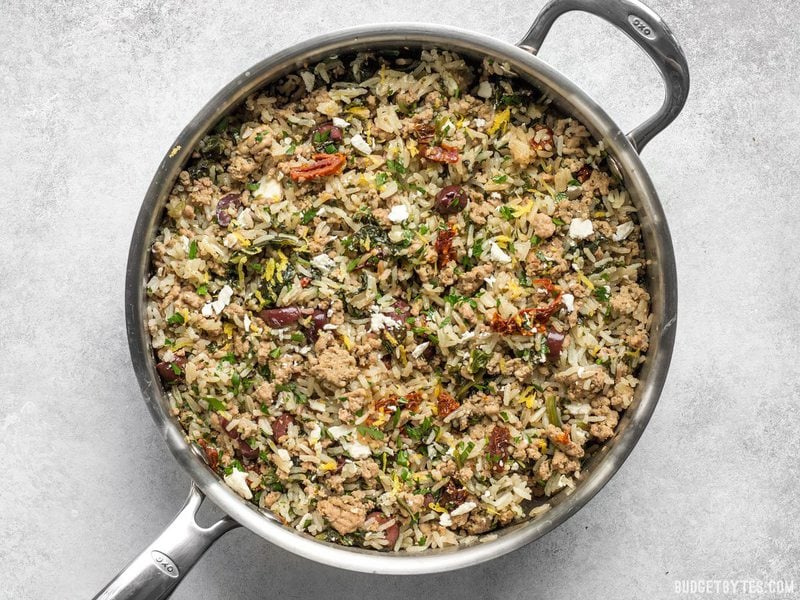 While the skillet is simmering, zest the lemon and then cut it into wedges. Roughly chop the parsley. Sprinkle the lemon zest, parsley, and feta over the skillet once it’s finished cooking. 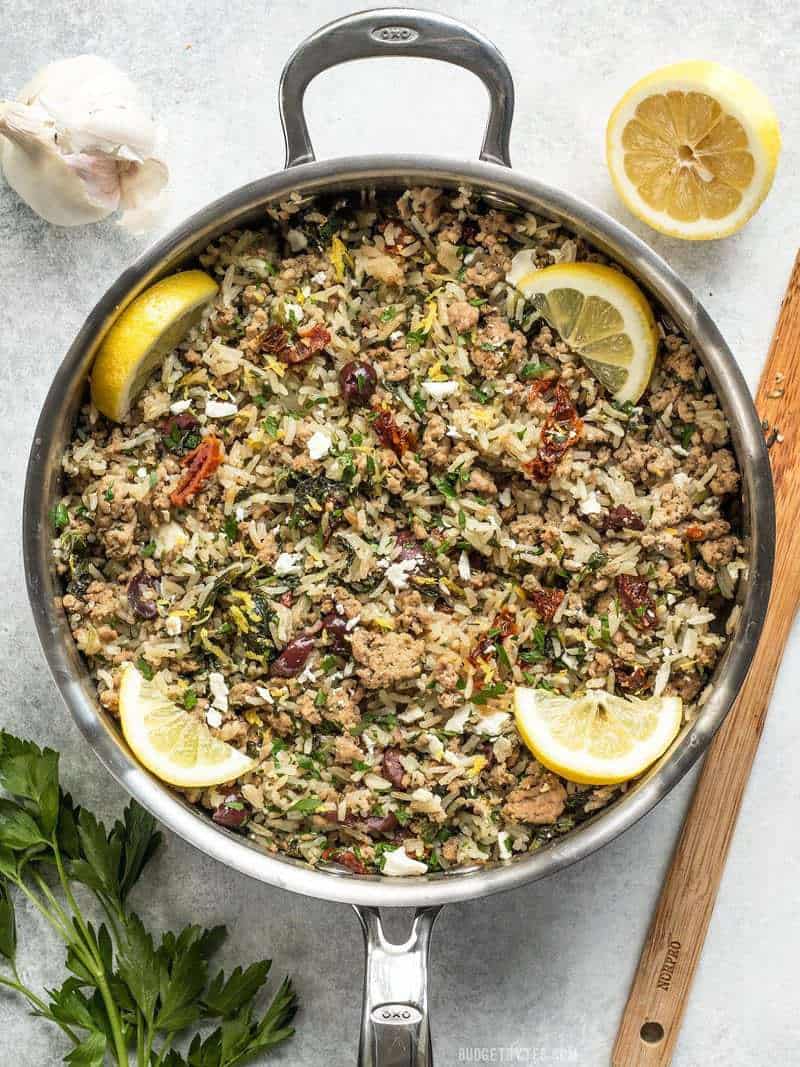 Serve with the lemon wedges to squeeze over top just before eating. NOM. I could seriously eat that whole thing! 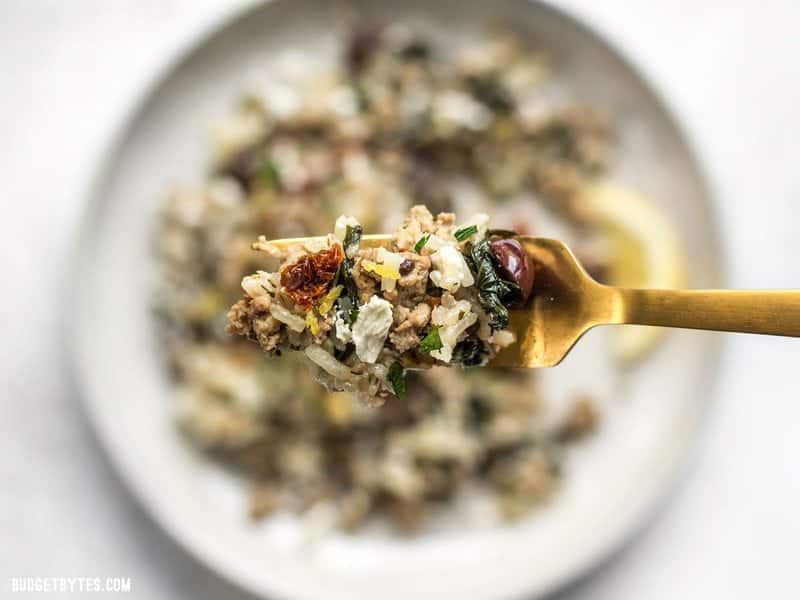 So many colors and flavors in this Greek Turkey and Rice Skillet!