I had never really cooked with ground turkey before (okay, maybe once and it wasn’t good) but I think I discovered the key. You have to season it up really really good. I added so many goodies to these Greek turkey burgers that they’re almost half way between a veggie burger and turkey burger. Tons of flavor, tons of color, tons of goodness.

I also made a really quick garlic & dill yogurt sauce to go along with the burgers. The sauce was so good that I kept eating it straight with a spoon… I might be making this sauce more often! I’m sure it’s delish on all sorts of stuff. Plus, it’s super quick and easy. You definitely want to use greek yogurt so that the sauce stays nice and thick. If you have regular yogurt, you can strain it over a coffee filter in the refrigerator for a day to remove some of the liquid leaving you with a nice, thick, greek yogurt substitute.

Oh yeah, I used preminced garlic (in a jar) for this recipe because it has a deep, mellow, flavor that I think goes well in uncooked sauces. Fresh garlic is sharp and spicy and can be a bit overwhelming in some recipes. 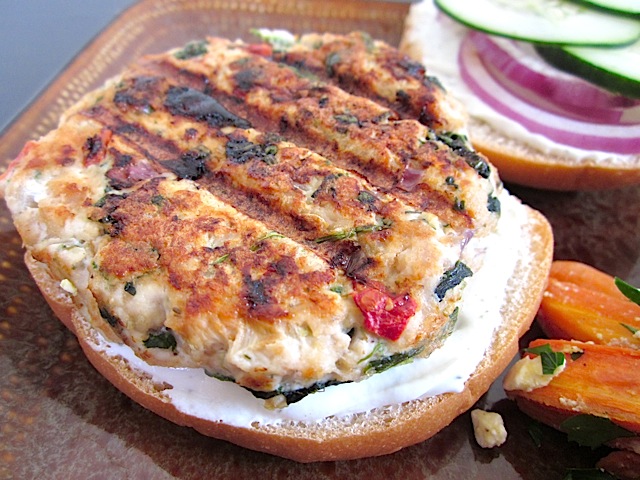 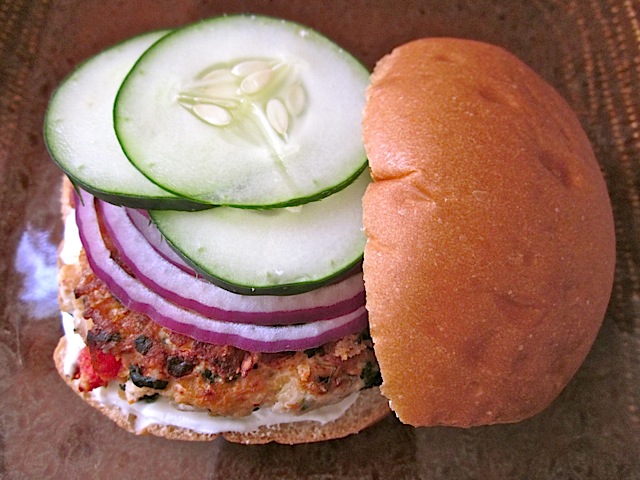 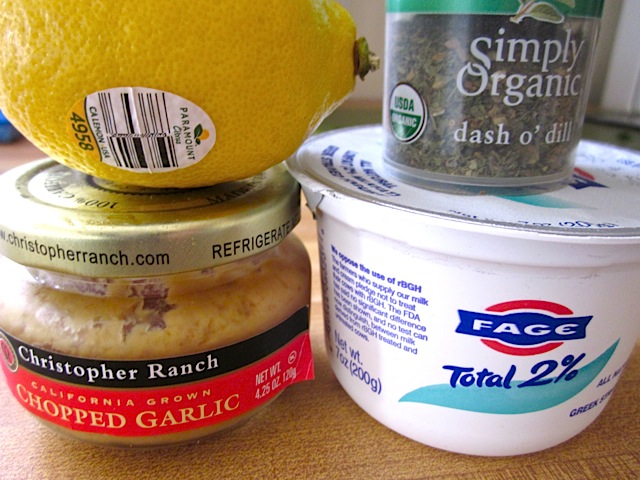 Make the yogurt sauce first so that the flavors have time to blend while you make the burgers. Combine the yogurt, garlic, dill, juice from half the lemon and a dash of salt. 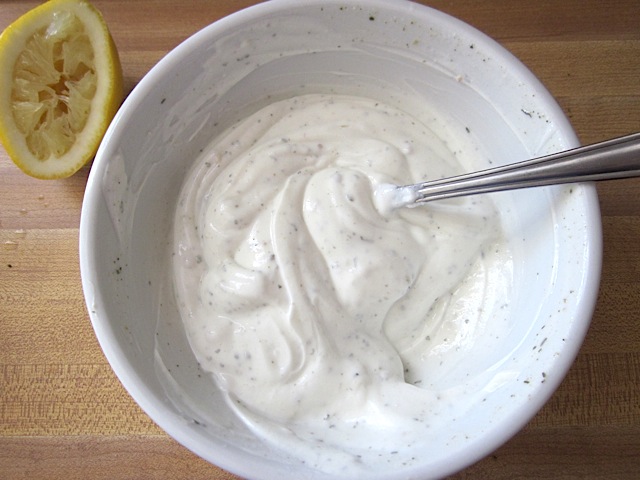 Give it a taste and see if you want more of this or that. Cover and refrigerate until ready to serve. I’m officially in love with this sauce. 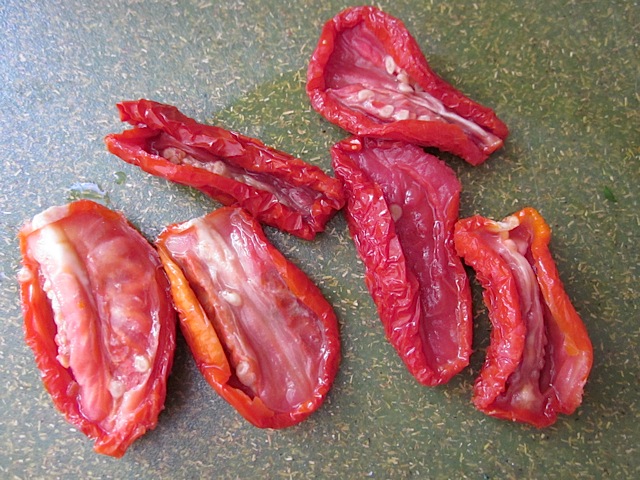 Use about six halves of sun dried tomatoes. This was about 1/3 of the package that I bought. Because the tomatoes are dried, if you keep them wrapped tightly in the refrigerator the rest should stay good for quite some time. They’re great to add to salads, omelets, pasta and pizza. 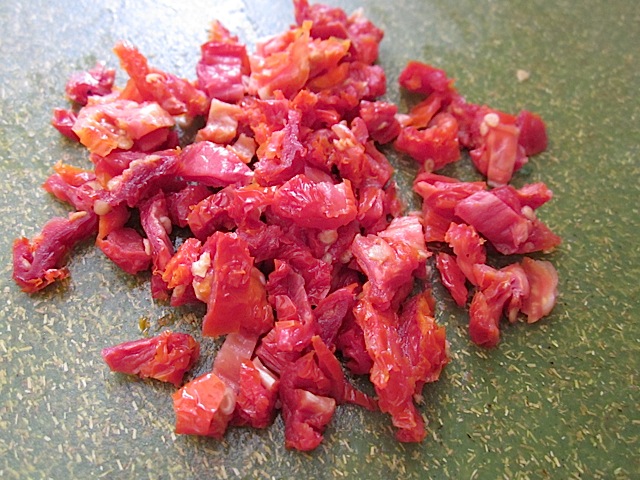 Chop the tomatoes up fairly small so that you’ll get little bits throughout the burger. 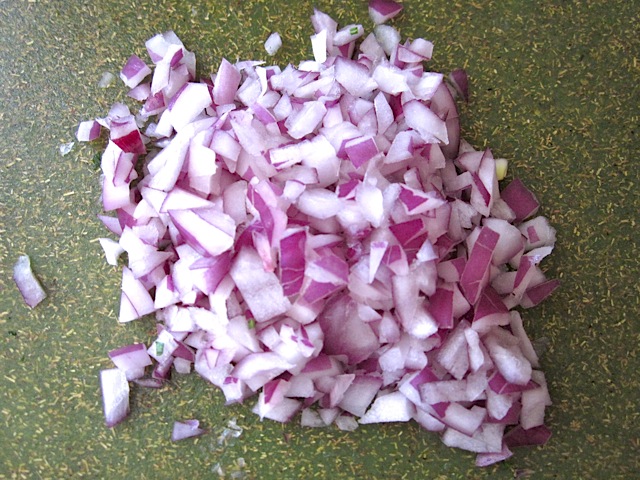 Mince 1/4 of the red onion. The rest of the onion will be thinly sliced and used to top the burger. If you have picky eaters, you can just slice some and serve on top for those who like onions. 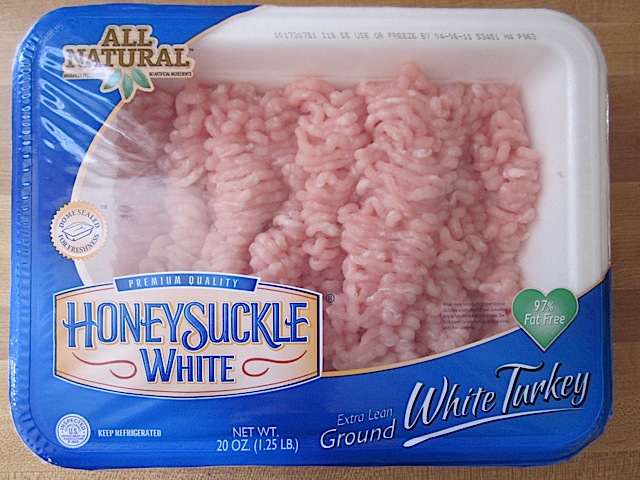 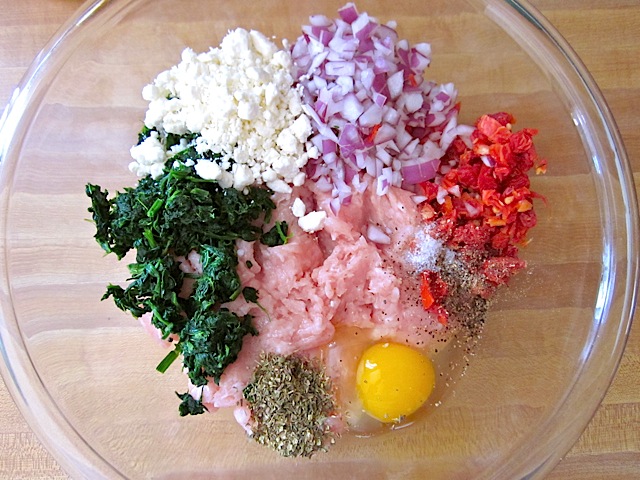 In a bowl combine the turkey, egg, tomato, onion, feta, garlic, oregano, 1/2 tsp of salt and some freshly ground pepper. Because of all of the add-ins, I thought the burger would have a difficult time holding together and would need the egg for extra binding power. After stirring this mixture up, I realized that the turkey is much more mushy than ground beef and probably would have held everything together just fine. In fact, the mixture was a bit too wet with the egg so I ended up stirring in 1/3 cup of bread crumbs. Moral of the story: you might not need the egg OR the bread crumbs to hold this together. I would mix it all together minus the egg and bread crumb to see if it holds a patty shape and if not, then add the egg and bread crumbs. 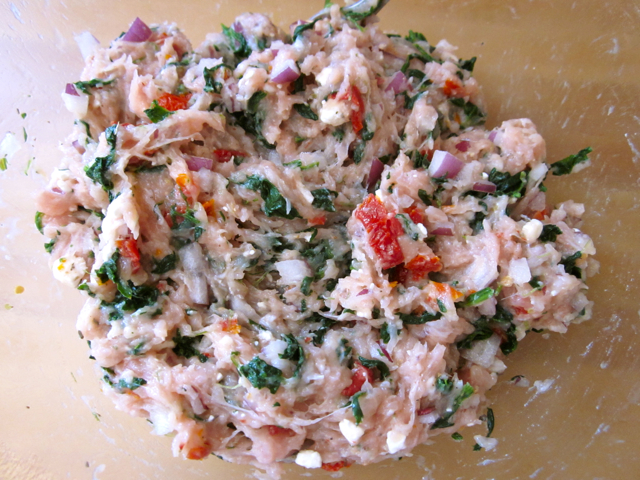 This is the mixture all stirred up. Just gorgeous! 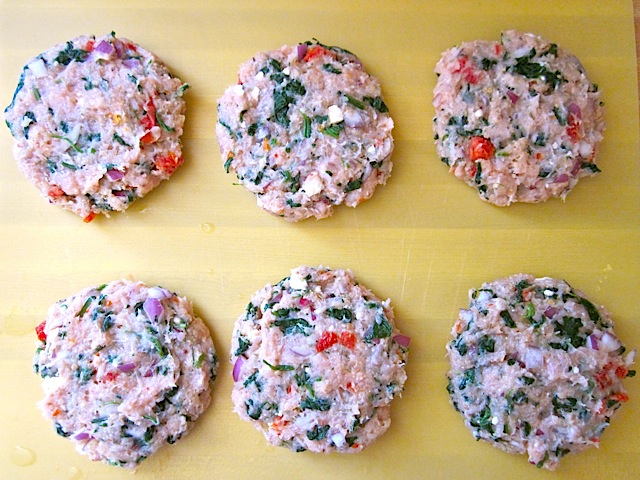 Make six Greek turkey burger patties out of the mixture. It might be fairly sticky but just do the best you can. 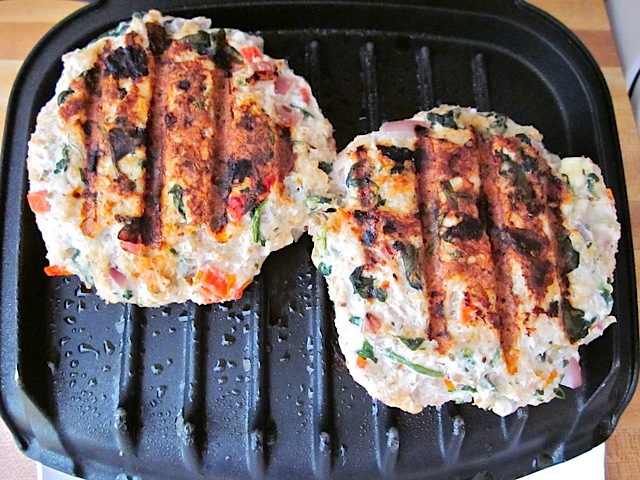 I pulled out my George Foreman Grill for the burgers but you can also cook them in a skillet, griddle or grill. If you choose a skillet, make sure it’s non-stick. I tested a couple out in a skillet that was not and despite using tons of oil, they still stuck all over the place and just turned into a hot mess. Literally. 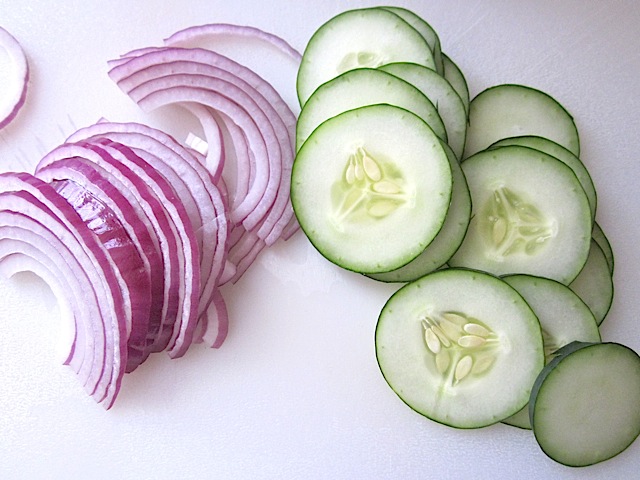 I sliced up the rest of my onion and the cucumber to top the Greek turkey burgers. You could also use fresh tomato, tapenade or hummus. 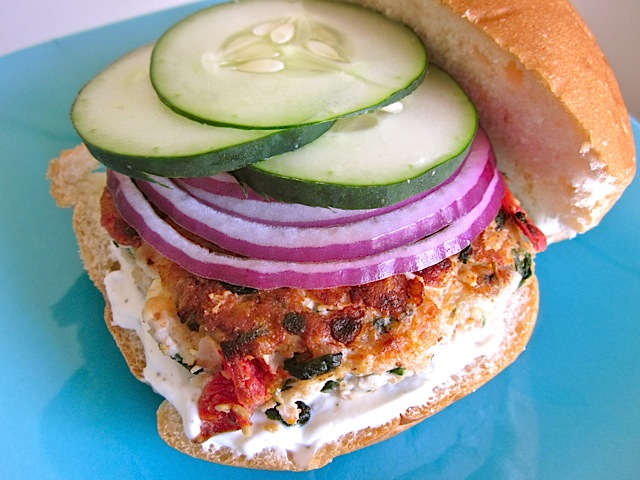 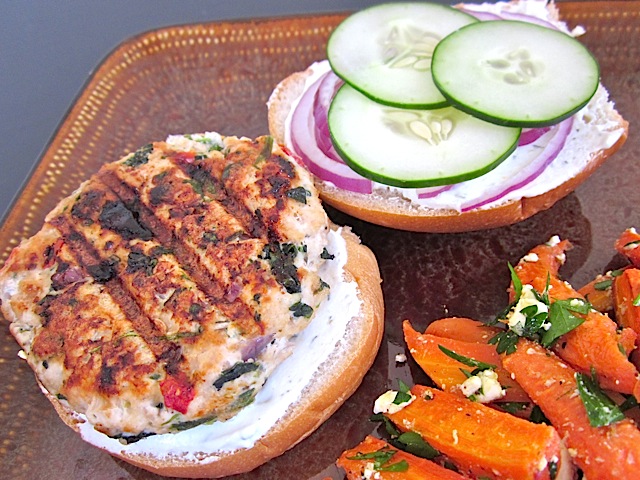 Greek Turkey Burgers are a great alternative to a traditional beef burger. 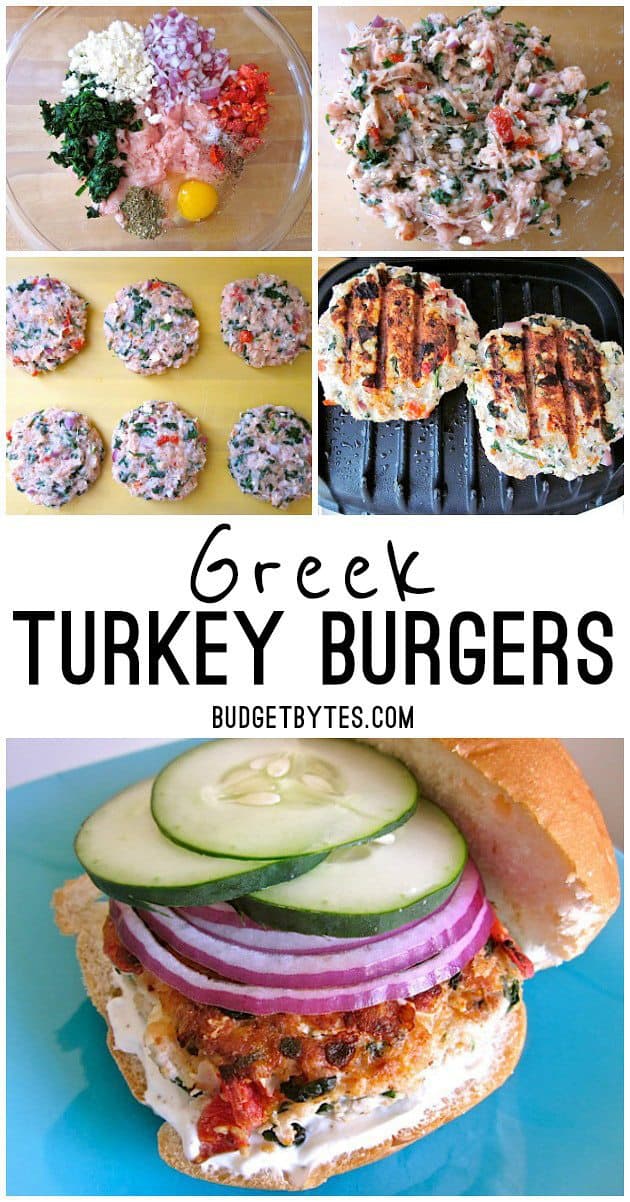