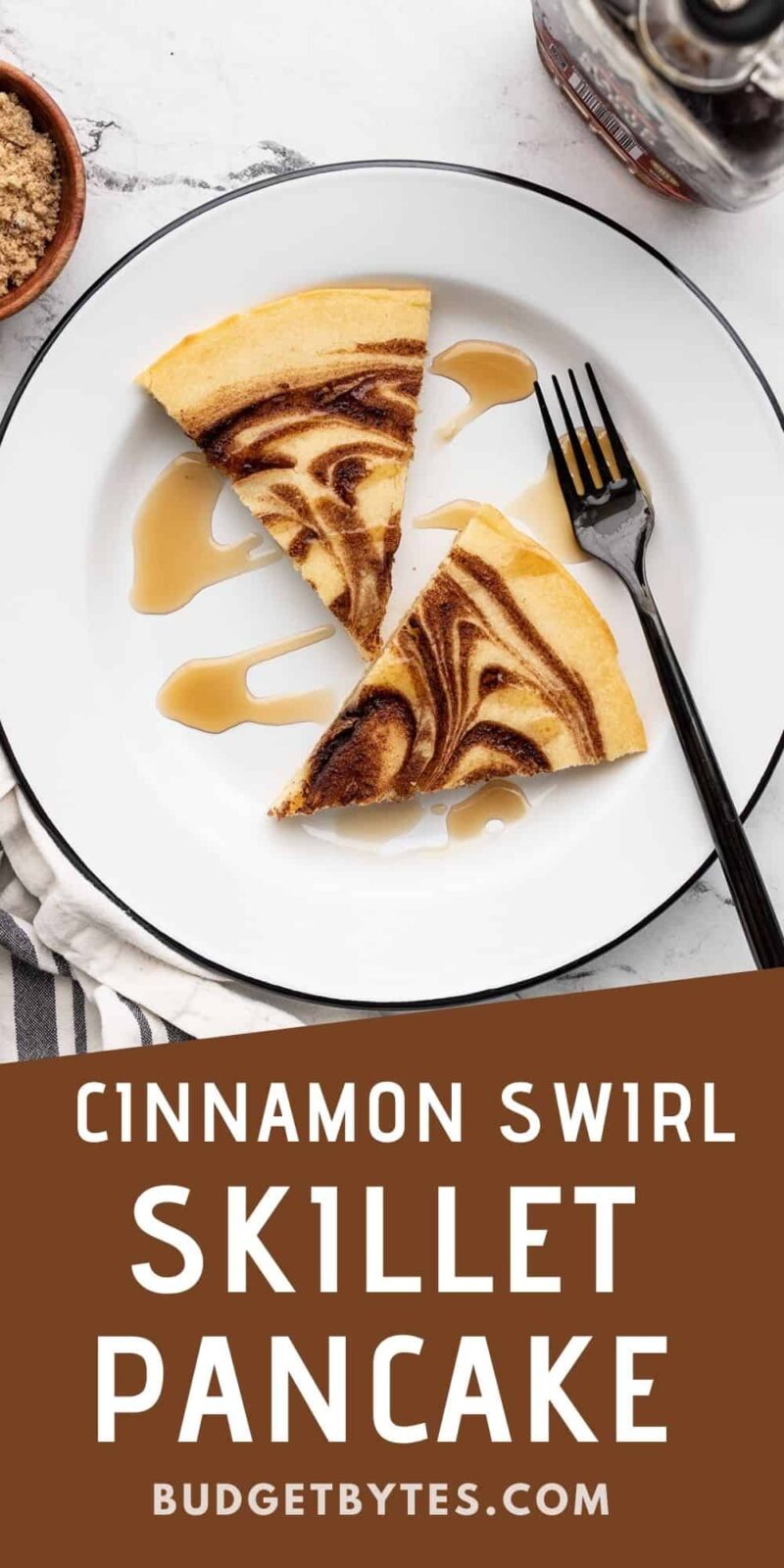 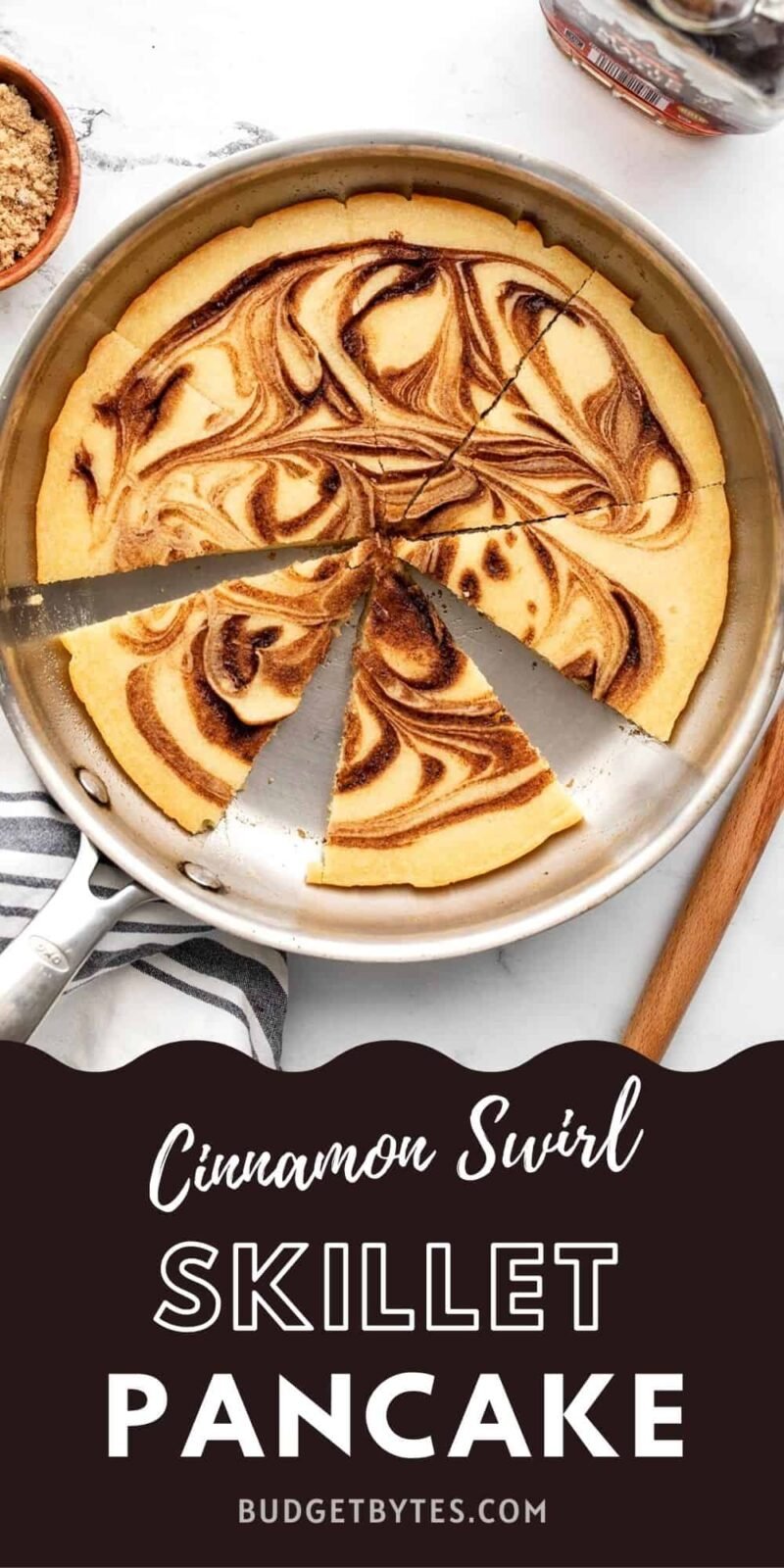 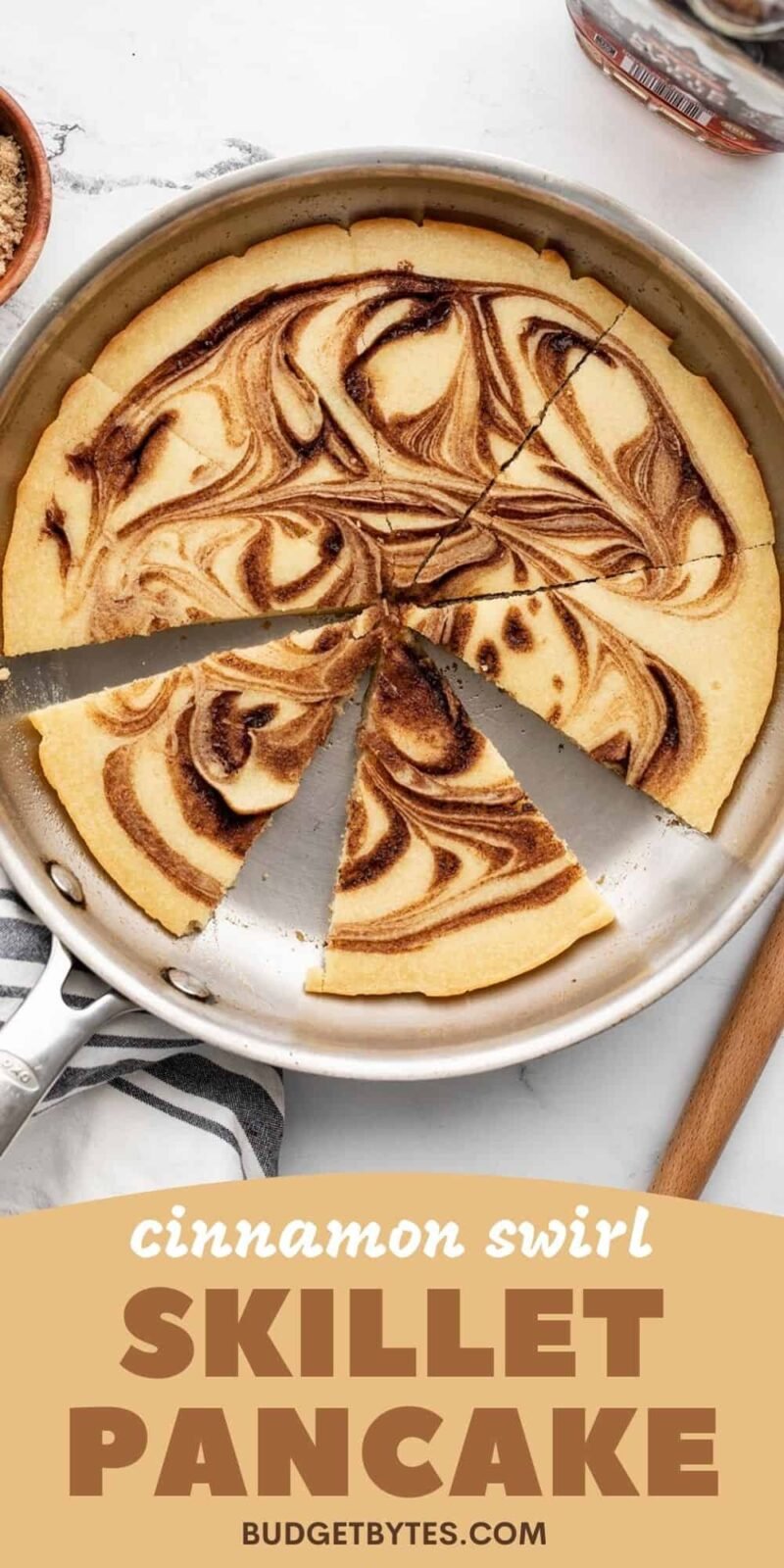 I love pancakes, but I find the process of cooking them a little tedious and frustrating. I can only cook a few at a time in a skillet which leaves me stuck between serving everyone at different times, or serving all at once with some pancakes being a little less than fresh. So I just started cooking them as one big sliceable pancake! It’s so much easier and a lot more hands-off. With this method, the entire batch of pancake batter is cooked at one time in the oven and then it’s sliced and served like a cake. I guess you could say that it’s a literal pan-cake!

You don’t have to make your oven pancake “cinnamon swirl” flavor, you can add any of your usual favorite pancake add-ins. Here are some other pancake topping ideas:

Use Your Favorite Pancake Batter

Use an Oven Safe Skillet

The most important part of this recipe is that you use an oven-safe skillet. This means no plastic handles and no Teflon coating. Stainless steel or cast iron will both work. You can also do a similar oven-baking method using a sheet pan (see sheet pan pancakes).

4.73 from 11 votes
Cook all of your pancakes at once as one large oven pancake to make sure everyone gets a hot and fresh slice at the same time.
Author: Beth – Budget Bytes 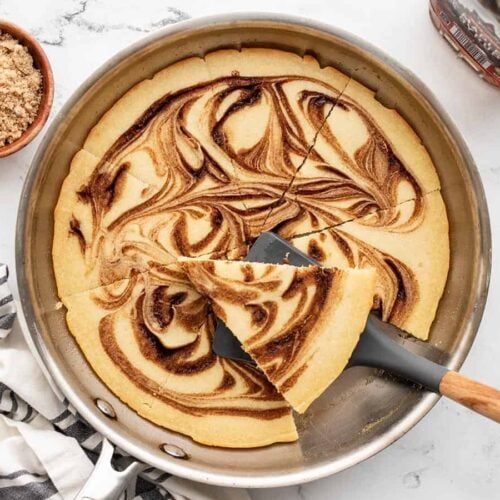 *If using unsalted butter, you may want to increase the salt in the recipe to ½ tsp.

How to Make an Oven Pancake – Step by Step Photos

Pour the bowl of wet ingredients into the bowl of dry ingredients and stir just until everything is combined. It’s okay if there are a few lumps, it’s more important to avoid overstirring. Let the batter sit for five minutes. Meanwhile, prepare the cinnamon swirl mixture.

Combine 1 Tbsp melted butter, 1 tsp cinnamon, and 2 tsp brown sugar in a bowl. This will be the cinnamon swirl.

Add 1 Tbsp butter to a 10-inch oven-safe skillet. Heat on the stove top over medium until the butter is sizzling and foaming, then spread the butter all over the surface and up the sides of the skillet.

Pour the pancake batter into the skillet, then drizzle the cinnamon swirl over top. Gently drag a spoon through the surface to swirl the cinnamon into the batter. Transfer the skillet to the preheated 425ºF oven.

Bake the pancake for about 18 minutes, or until it’s puffed in the center and slightly golden brown around the edges. If you prefer the top more browned, you can switch the oven to the broil setting for a couple of minutes (watch it closely!).

Slice the pancake into eight pieces and serve immediately.

TRY THESE OTHER PANCAKE RECIPES: