I’m declaring chimichurri the sauce of the summer. It’s so bright and vibrant, and as I’ve mentioned before it’s good on pretty much everything! This week I made this scrumptious one-pot Chimichurri Chicken and Rice, which was based loosely on Trader Joe’s frozen chimichurri rice and vegetables (a product that many of you suggested I try). I added chicken just to make it more of a full, one-pot style meal, but making this vegan would be super easy, too. Just swap out the diced chicken for a can of chickpeas and you’re good to go! 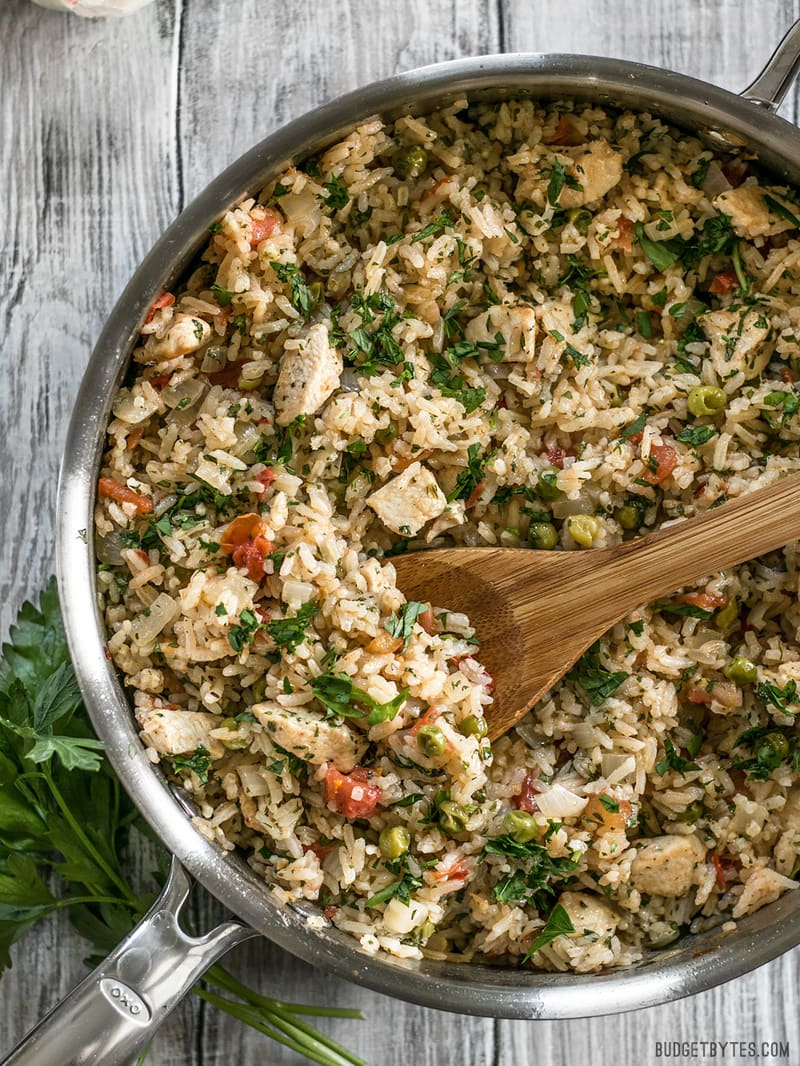 I made a smaller batch of chimichurri this time and because of that I decided to just chop everything by hand instead of using my food processor. Surprise, surprise, I liked it a lot better than my super processed chimichurri!! So, I’ll be making it by hand from now on. And honestly, it was easier to finely chop all that stuff than it is to clean the food processor. :P

Tips for Cooking One Pot Recipes

As will all one-pot rice dishes, it’s absolutely critical to use a good quality pot with a thick bottom. If you use a thin pot or skillet you’ll get hot spots and cold spots leaving the rice uncooked in some areas and dry or burned in others. Even heat is critical. If you have a rice cooker, you could totally do this in the rice cooker, too. Just do all the sauté steps in a skillet, then transfer everything (chicken, vegetables, rice, water) to the rice cooker, cook per the machine’s instructions, then fold in the chimichurri at the end. 👍

4.80 from 25 votes
This Chimichurri Chicken and Rice is a bright and vibrant summer meal that cooks in just one pot to make dinner fast and easy. 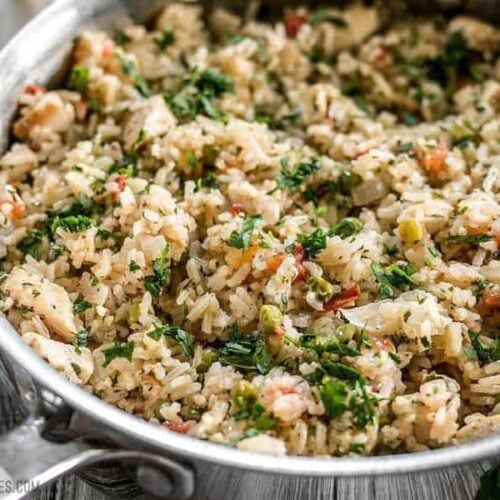 *I used jasmine rice because it's my rice of choice, but regular long grain white rice will work just as well. 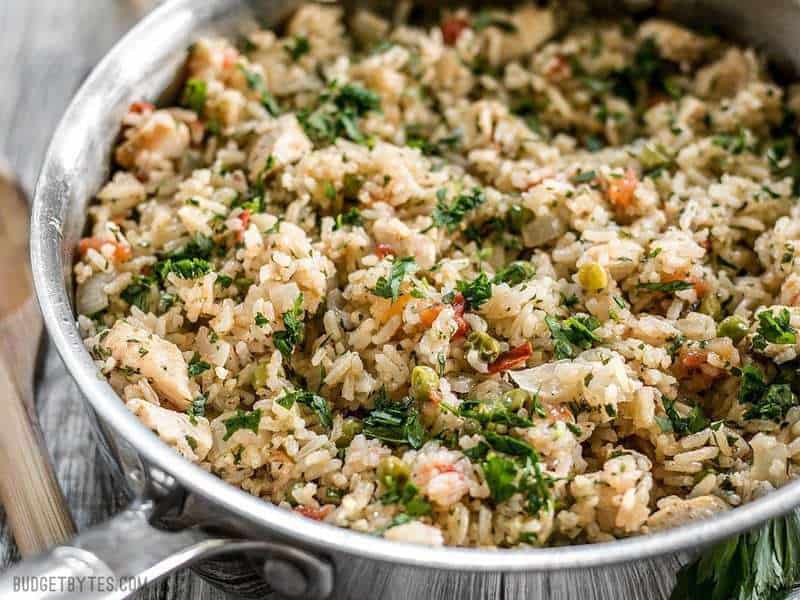 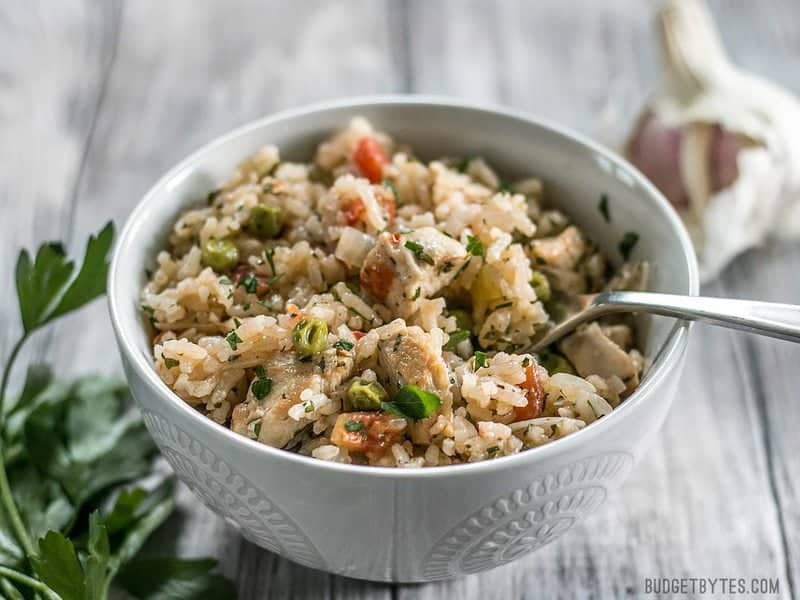 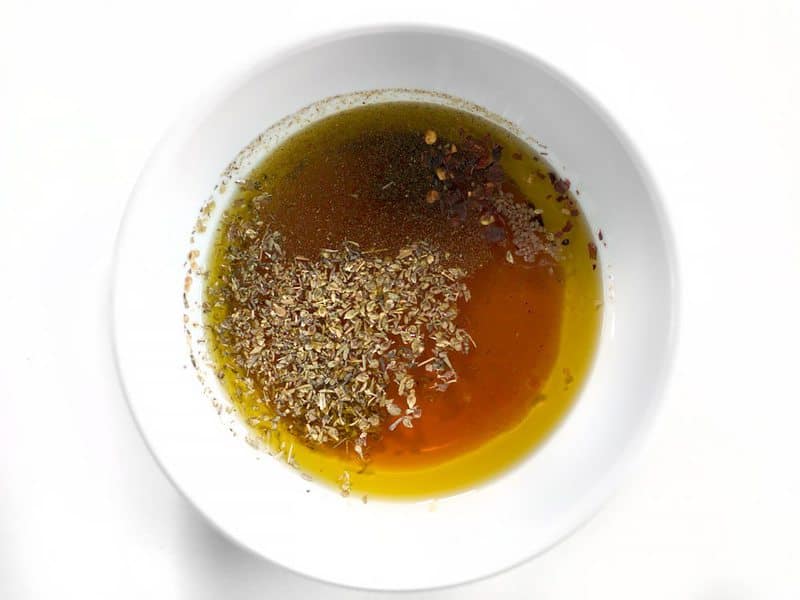 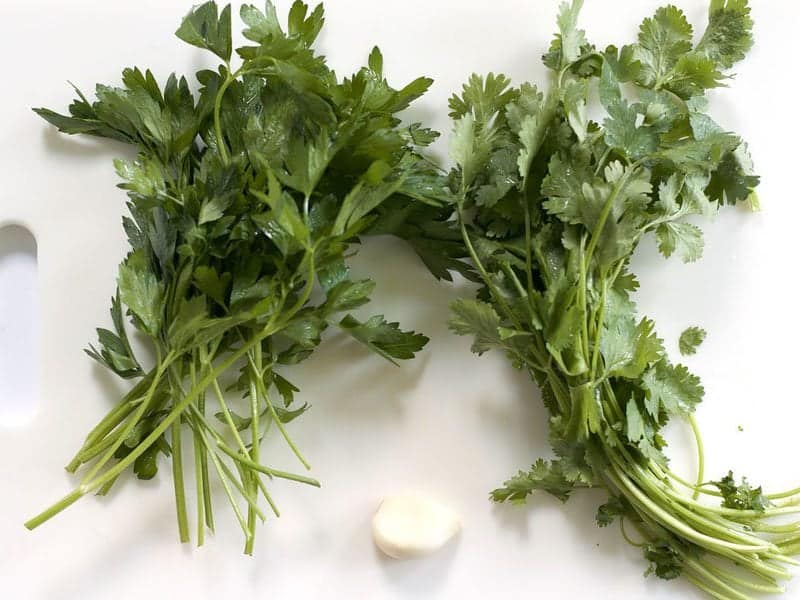 You’ll want about 1/2 cup loosely packed each chopped parsley and cilantro, so I just grabbed about 1/4 of each of my bunches. This recipe is super flexible so you don’t have to stress over getting the amount of parsley and cilantro right. But, if in doubt, more is better. Oh, you’ll also need a large clove of garlic. 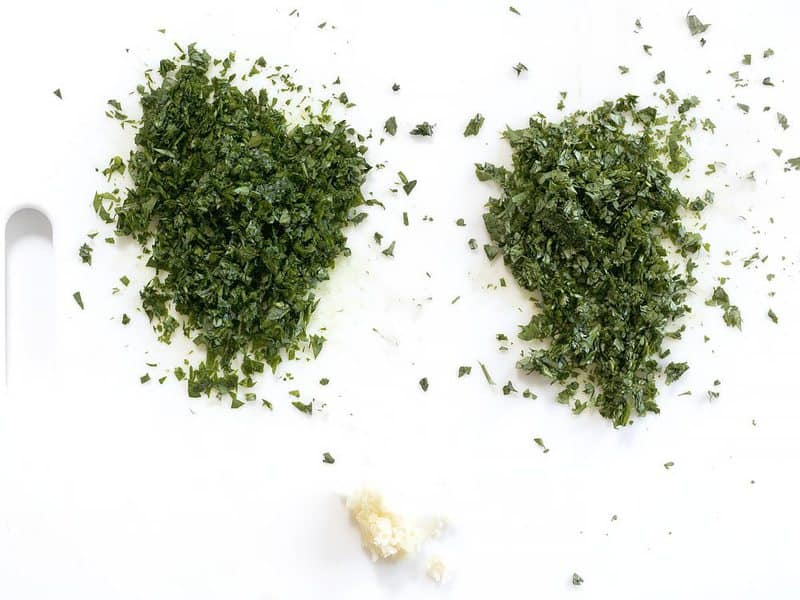 Chop the parsley and cilantro very finely. Mince the garlic. 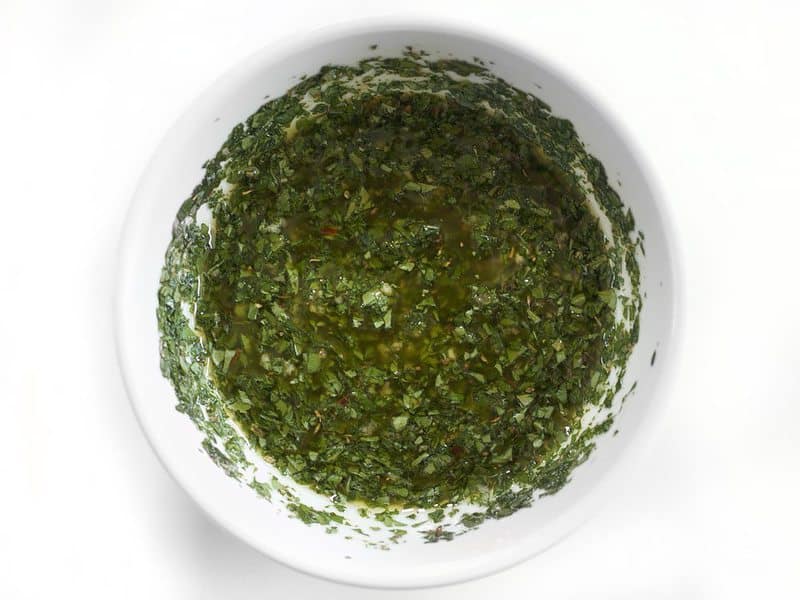 Stir the parsley, cilantro, and garlic into the oil and vinegar mixture. Set the chimichurri aside. 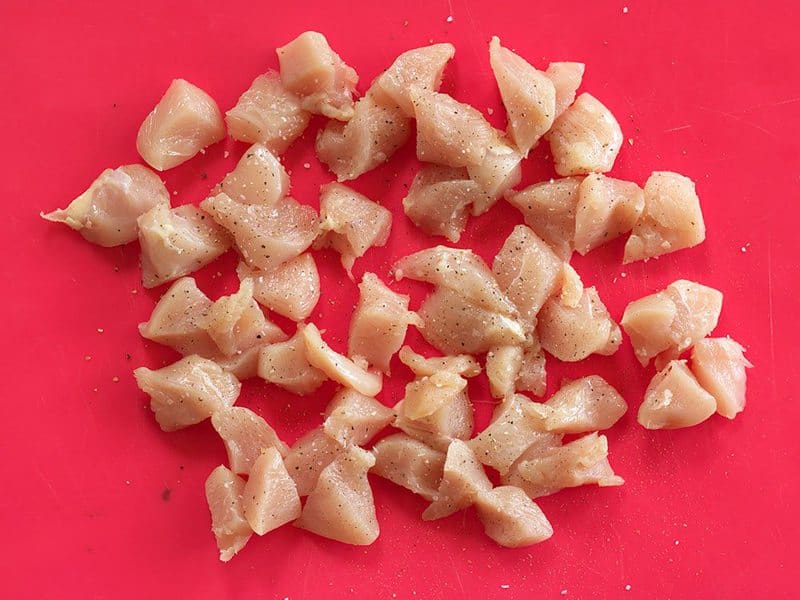 Cut one boneless, skinless chicken breast (about 3/4 lb.) into small pieces. Season with a pinch of salt and pepper. 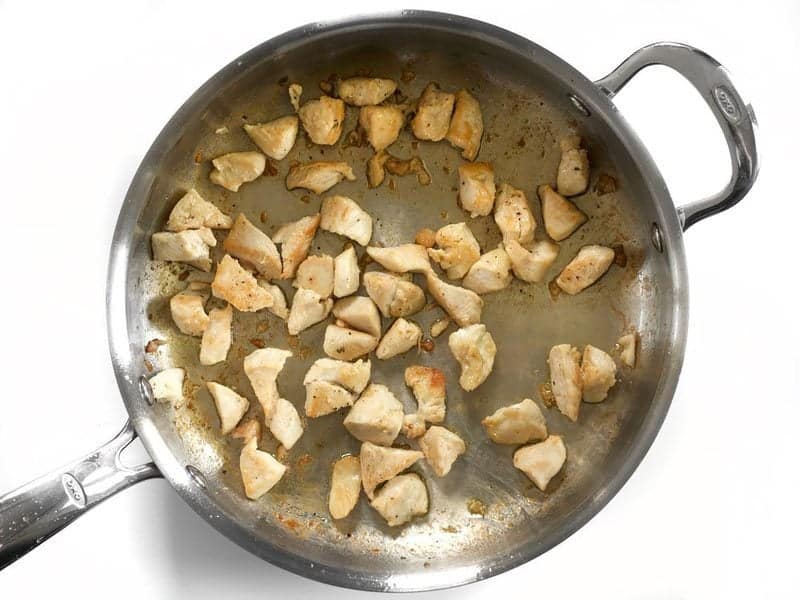 Heat 1 Tbsp olive oil in a deep skillet over medium heat. Once hot, add the chicken pieces and cook them until they’re golden brown, then remove them from the skillet. 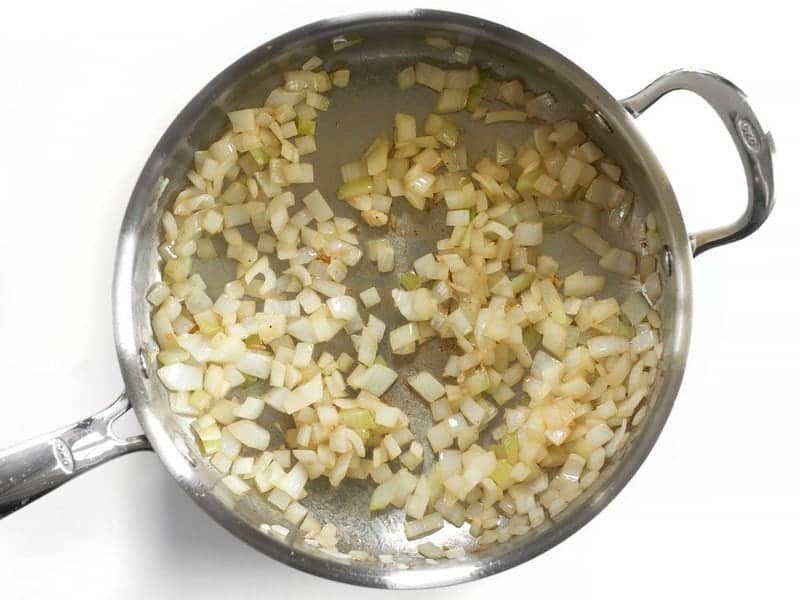 While the chicken is cooking, dice an onion. After removing the chicken from the skillet, add the onion and sauté until they’re soft. 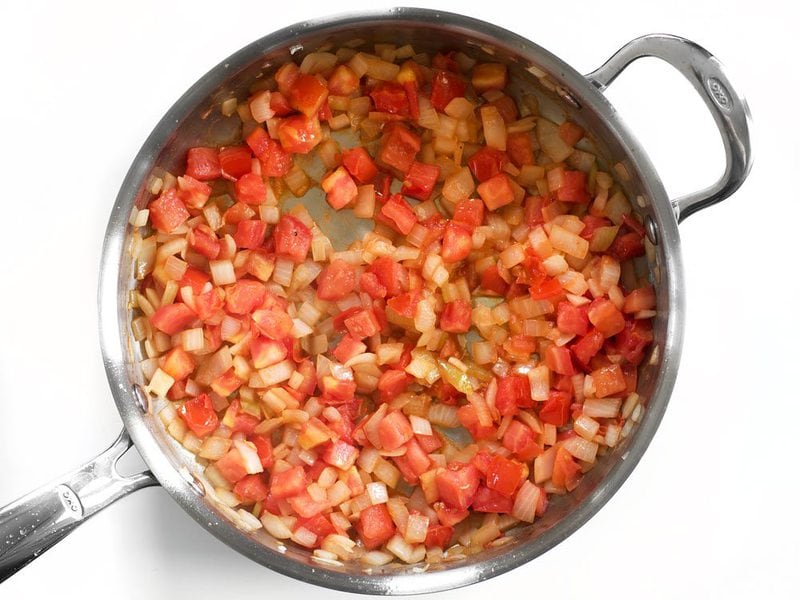 While the onions are sautéing, dice two Roma tomatoes. Add the diced tomatoes to the skillet and sauté for just a couple minutes more, or until they start to lose their shape. 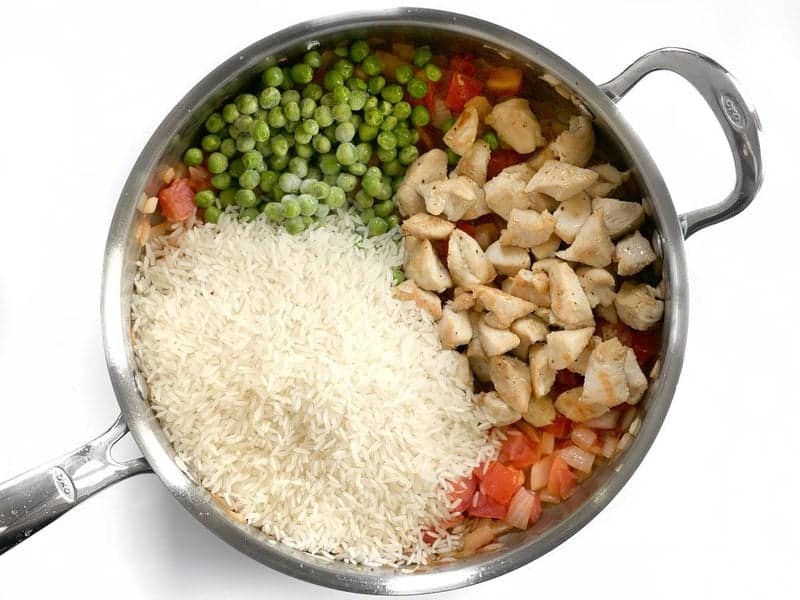 Add the cooked chicken back to the skillet along with 1/2 cup frozen peas and 1 cup long grain white rice (I used jasmine). 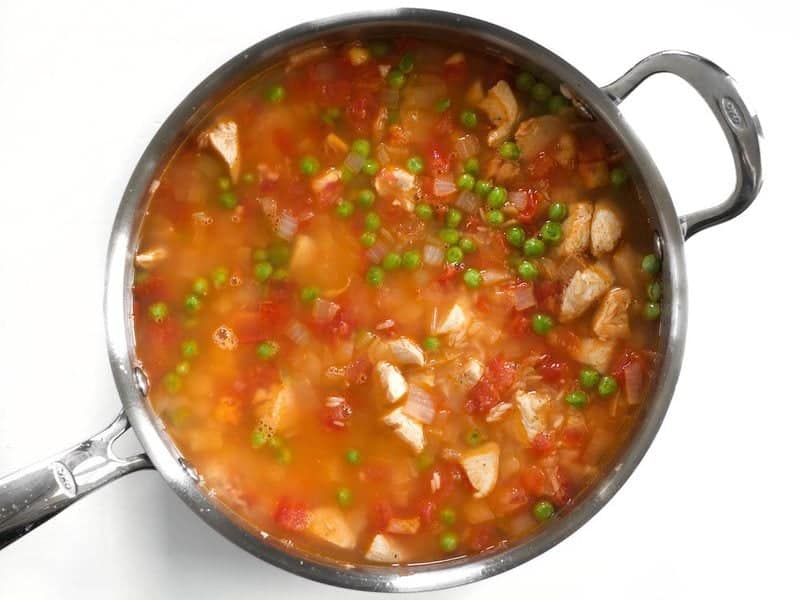 Add 1.5 cups water and 1/4 tsp salt. Give everything a brief stir, then place a lid on top, turn the heat up to medium-high, and let it come to a boil. Once it reaches a boil, turn the heat down to low or medium-low and let it simmer gently for 15 minutes. 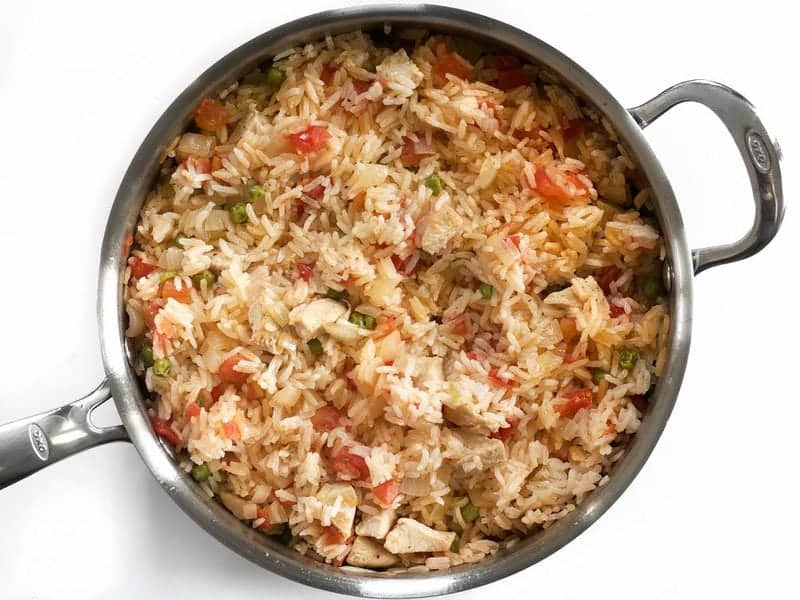 After simmering for 15 minutes, turn the heat off and let it rest for 10 minutes, undisturbed (lid in place). Finally, remove the lid and fluff it with a fork. 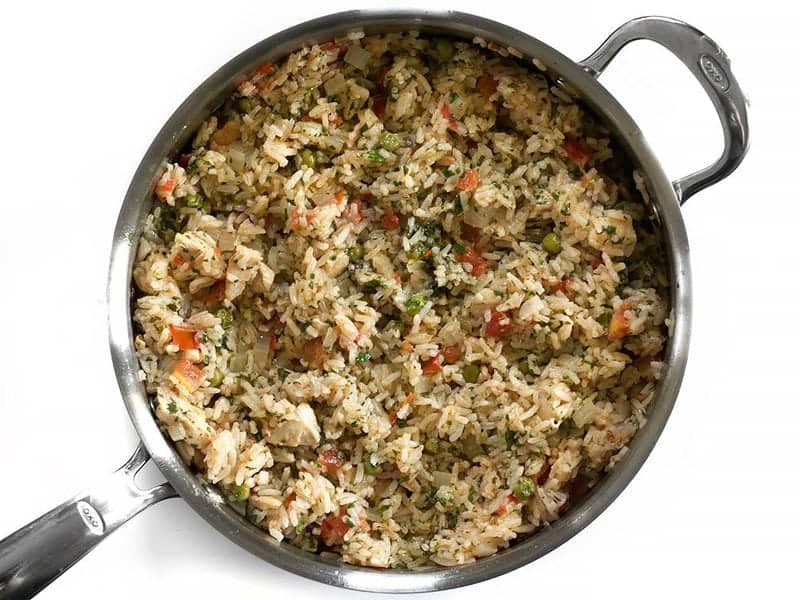 Finally, pour the chimichurri over the skillet and gently fold it to incorporate it into the chicken, rice, and vegetables. Make sure not to stir vigorously, or your rice will get sticky and mushy. Taste the dish and add more salt, if needed. 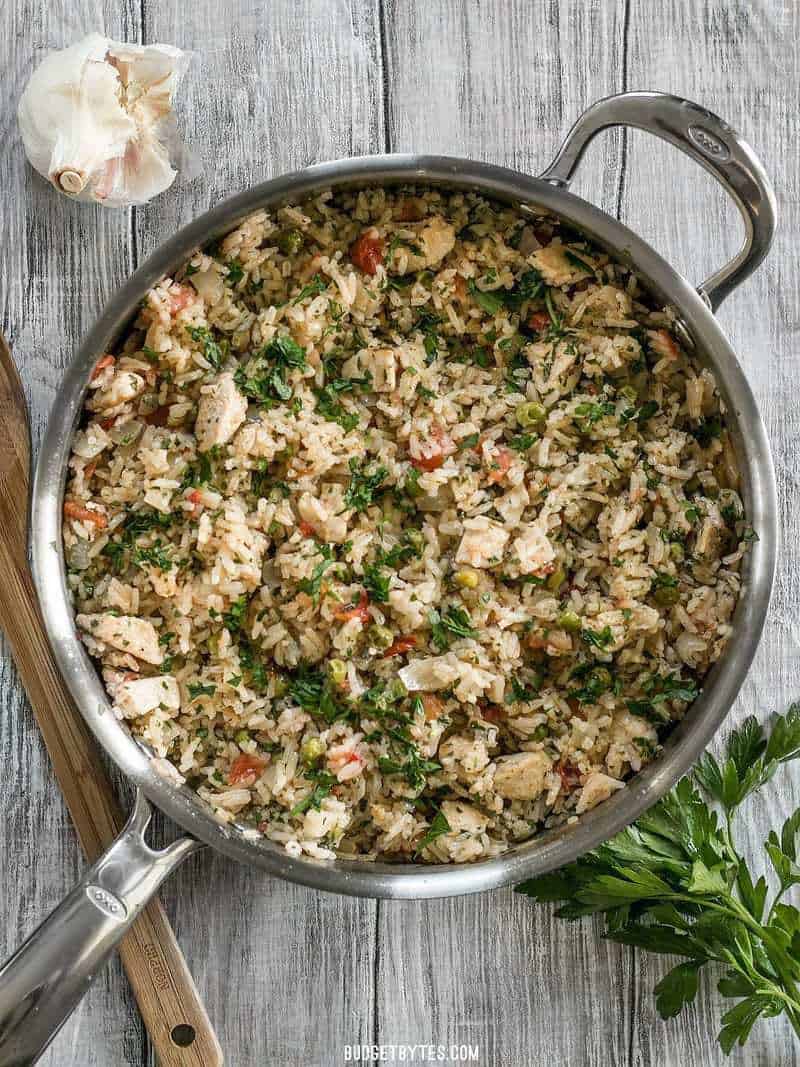 You can garnish the Chimichurri Chicken and Rice with a little extra parsley or cilantro, if you’d like