I’ve wanted to make this for a LONG time and in this cold, bleak weather it was just calling my name!

I deviated slightly from a traditional pot pie recipe in that I topped the pie with a big biscuit rather than using a pie crust. I liked the idea of having a fluffy biscuit to soak up the flavorful filling. It didn’t disappoint.

The ingredient list is long for this recipe because I used mostly fresh vegetables. If you want to cut down on prep time, you can certainly use a bag of mixed frozen vegetables. I won’t look down on you. Frozen vegetables are my best friend. I probably would have used them too, but I knew I was going to need carrots and celery for some other recipes this week, so I went ahead and bought them.

If you wanted to make this into a chicken pot pie, it would be super simple. Just get a rotisserie chicken, pick the meat off, and mix it in. Or cut up a chicken breast into small pieces, saute it up really quick in a skillet, and then add it in. Very easy.

Once you get through the chopping, this recipe is a breeze! 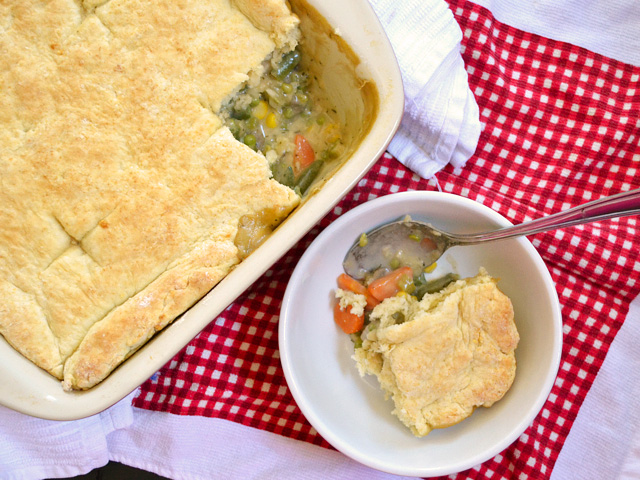 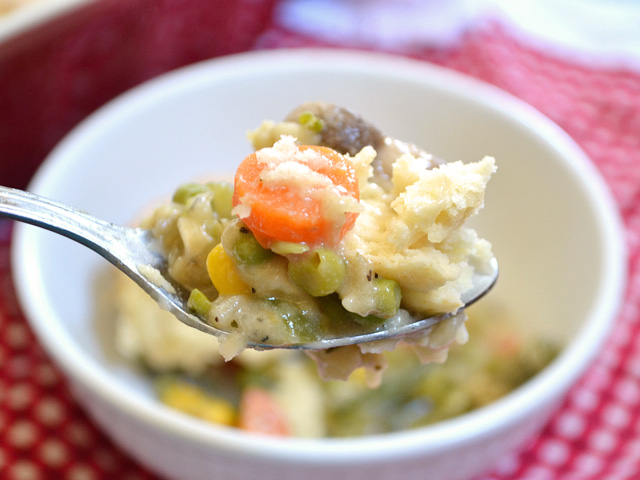 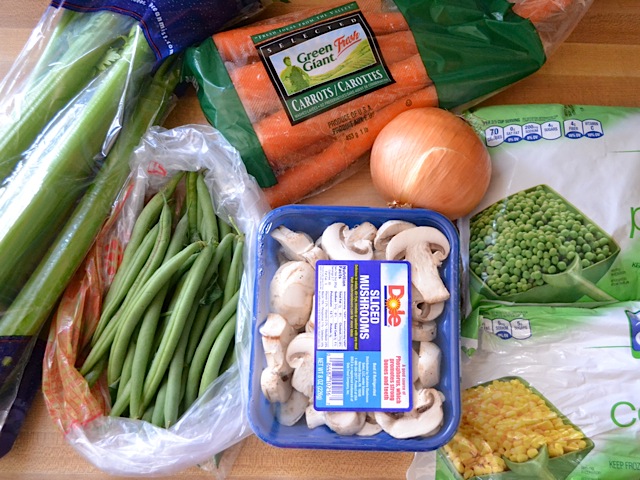 So these are the vegetables that I used. Had I not had plans for the rest of those carrots and celery, I probably would have bought a bagged mix of vegetables. Sometimes it’s not worth it if you know you can’t use up the leftovers. 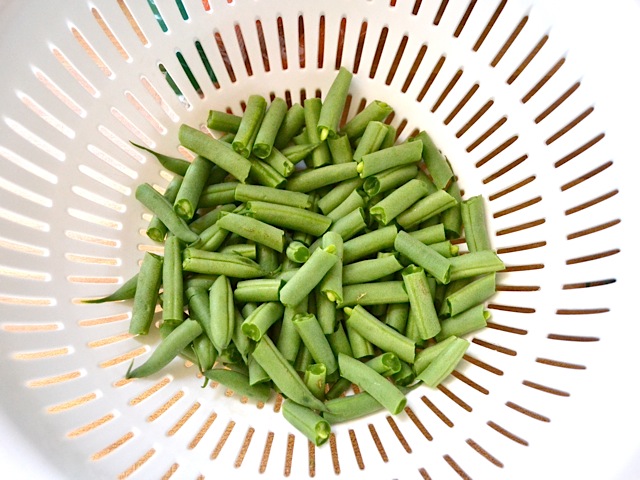 Get all of the veggies prepared before you begin cooking. Snap the green beans into one inch sections and give them a good rinse under cool water. 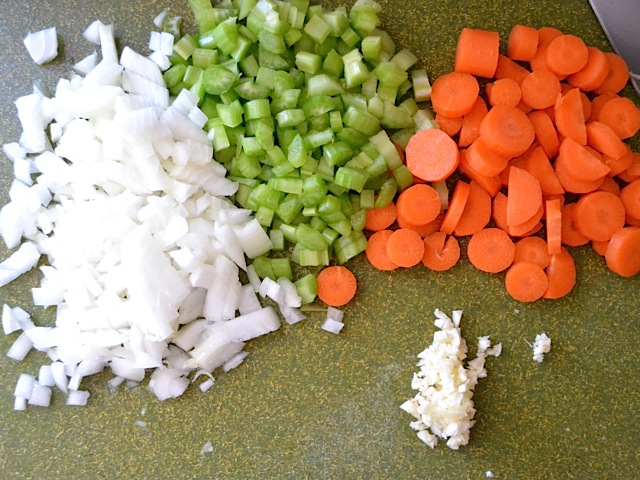 Dice the onion, chop the celery, and slice the carrots. Mince the garlic. 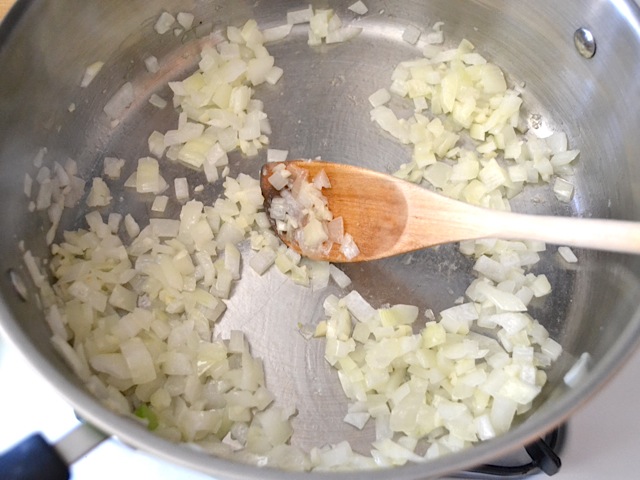 Get the onion and garlic going first. Cook them in 1 Tbsp of vegetable oil over medium heat until they’re soft. 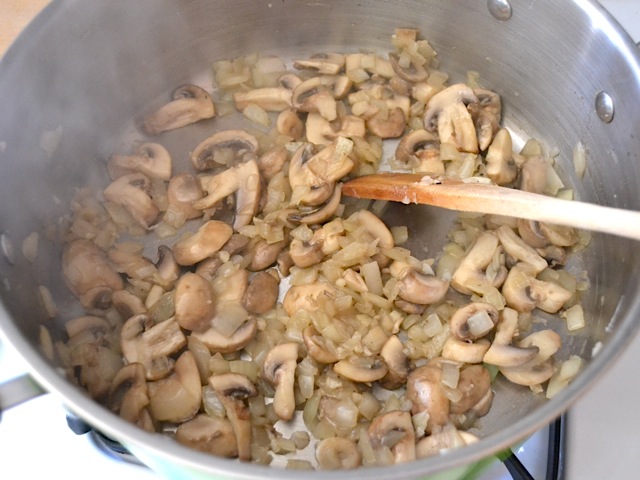 Then add the mushrooms and cook those down until they’re soft. They might seem dry at first but then they’ll suddenly start releasing all of their moisture and get limp. 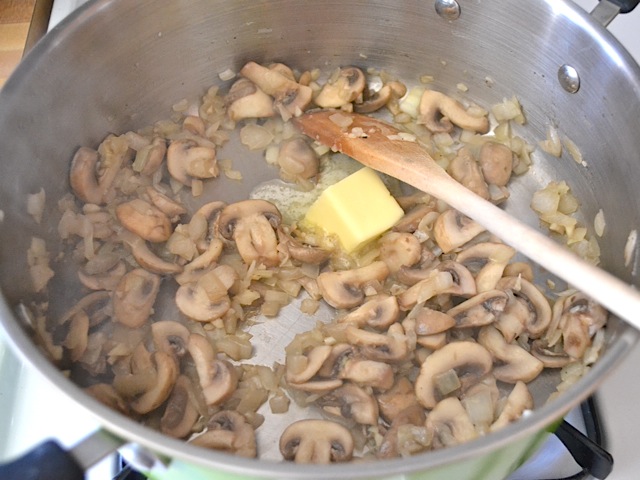 Once the mushrooms have softened, add the butter and let it melt in. 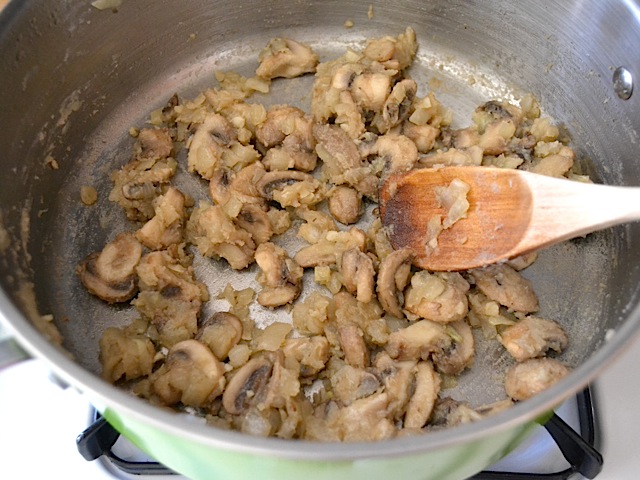 Then add the flour. Stir and cook the pot for about 3 minutes to give the flour time to slightly toast. This will prevent a floury flavor in the final product. It’s okay if it starts to stick to the bottom of the pot, just don’t let it burn. 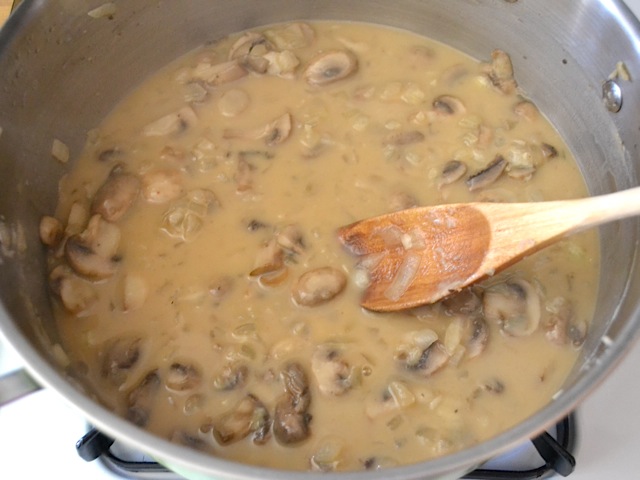 Warm the broth up slightly in the microwave and then add it to the pot. Stir well to dissolve all of the flour off of the bottom of the pot and the vegetables. 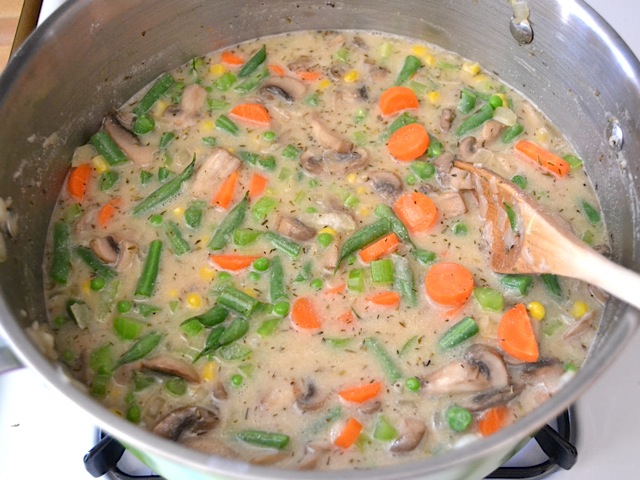 Warm the milk up too. Add it slowly as you stir the pot. If you dump the milk in cold and all at once, it may curdle. If it *does* curdle, it’s not a complete loss (mine did a little). That just means that the proteins seized up, not that the milk is spoiled, and by the time the whole thing is done, you won’t even see it. Also add the rest of your vegetables and the thyme. Let this mixture simmer for 10-15 minutes while you make the biscuit dough. 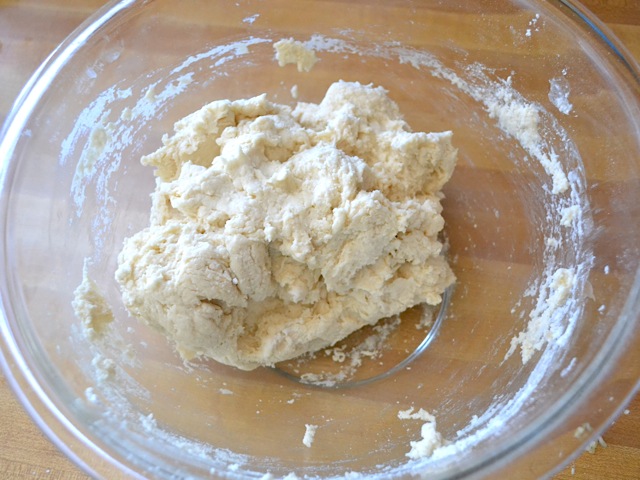 Start preheating the oven to 450 degrees. Make a basic biscuit dough, like this one. It’s easy and only takes about 10 minutes. 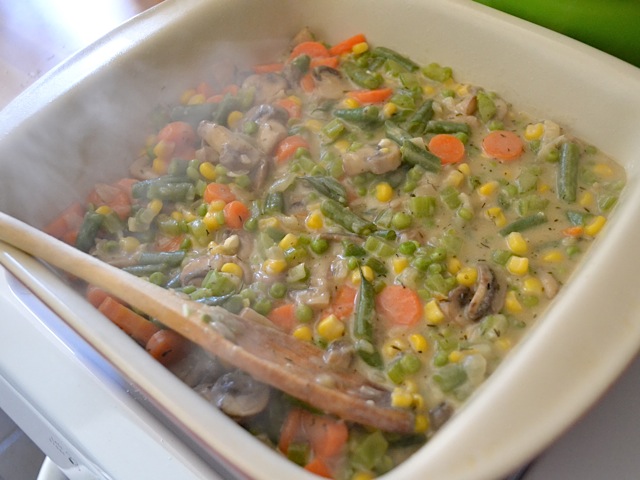 After the veggie mix has simmered for a while, give it a taste and add salt and pepper to your liking. I added about 3/4 teaspoon of salt and a few cranks of the pepper mill. If you mixture hasn’t thickened to your liking, you can sprinkle in a teaspoon or so of corn starch and stir until it thickens up. Pour the veggie mix in the bottom of an 8×8 casserole dish. 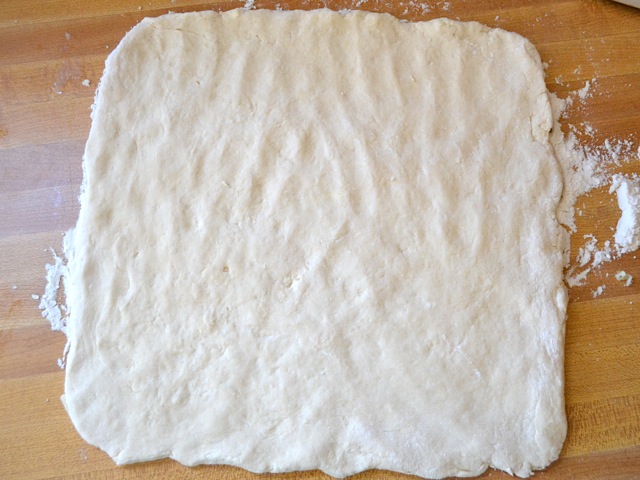 Turn the biscuit dough out onto a floured surface and shape it into a square roughly the same size as your casserole dish. 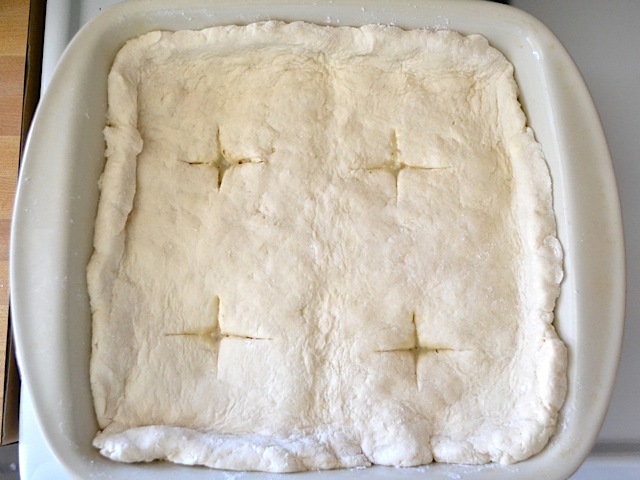 Transfer the dough to the top of the vegetables in the casserole dish (mine was just a smidge too big). Cut a few slits in the top to allow steam to escape. 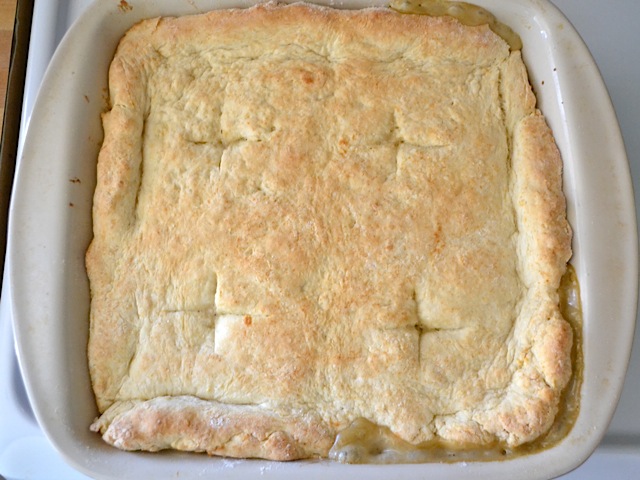 Bake the pot pie in the fully preheated oven for 15-17 minutes or until it is golden brown on top. 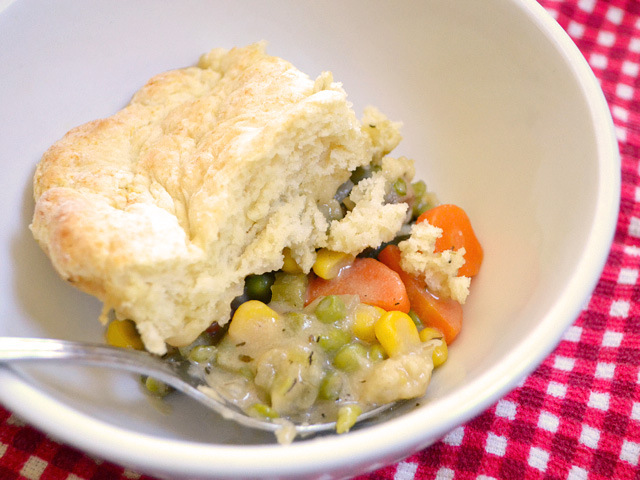 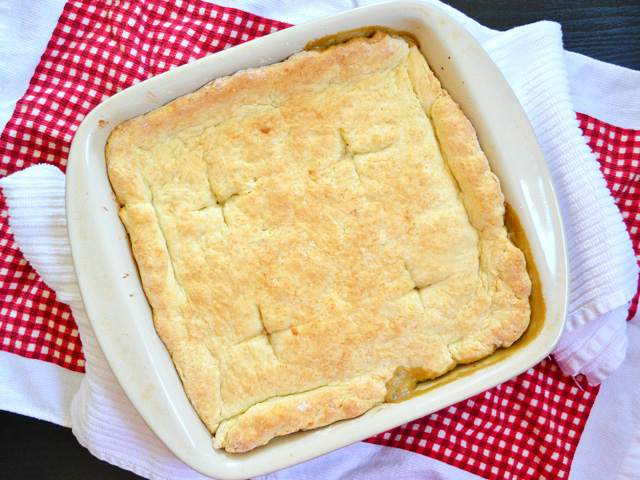