Easy dinners are my jam! I love these Sweet and Sour Pork Chops because they’re a super fast alternative to take out, they require NO chopping, you need only a few pantry staples to make the sauce, and it meal preps well. What else could I want? 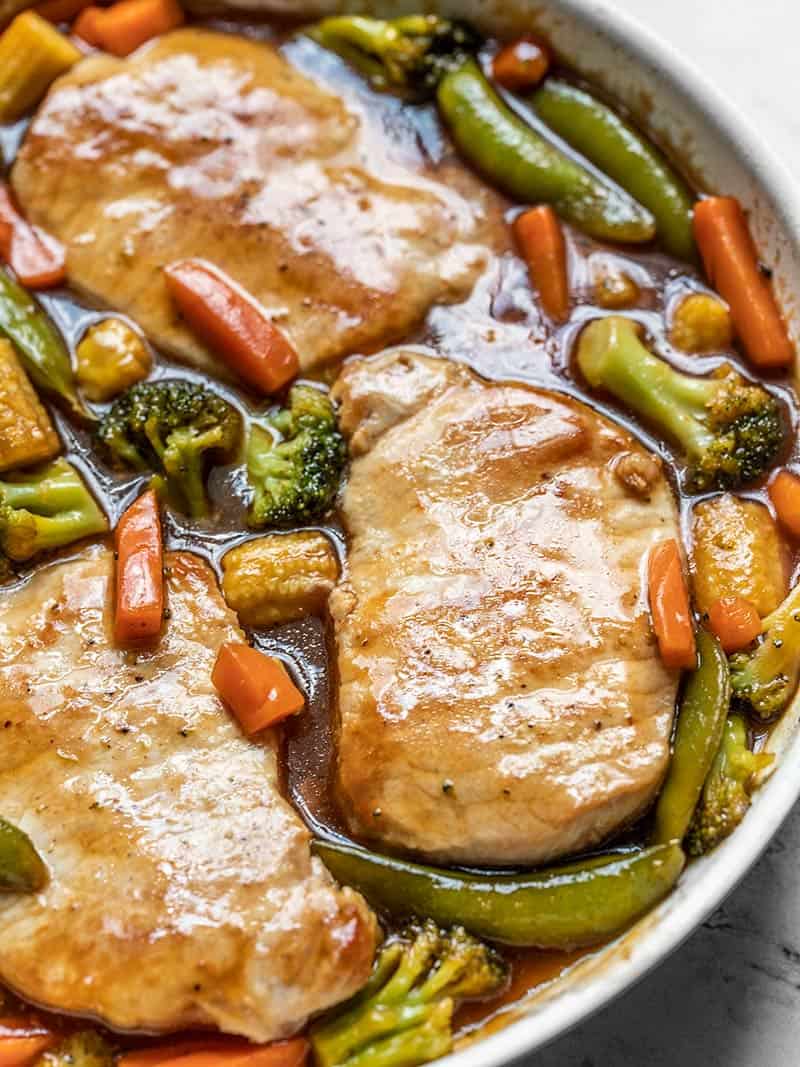 How to Avoid Dry Pork Chops

If you’ve avoided making pork chops in the past because they turn out dry and tough, you’ve got to give this method a try. Giving them a quick sear in a hot skillet then finishing them off later in the sauce allows the the outside to brown and heats them through before the pork chops have a chance to dry out.

If you’re new to cooking meat or pork in particular, I always suggest investing in an instant read thermometer so you know as soon as your meat has reached a safe temperature. Cooking meat beyond that point is how you usually end up with a dry, tough hockey puck. For pork chops, the safe internal temperature is 145ºF. I use this Digital Instant Read Thermometer, which retails for under $15, but is absolutely priceless in the kitchen.

Can I Reduce The Sugar in the Sweet and Sour Pork Chops?

Sweet and sour sauce is a sugar based sauce, by nature. You might be able to get away with reducing it by a tablespoon or two, depending on your taste buds (the sauce will be a lot more tangy that way), but this just isn’t a recipe to make if you’re living a low-sugar lifestyle. Unfortunately I don’t cook with sugar substitutes, so I’m not sure how they would perform here. 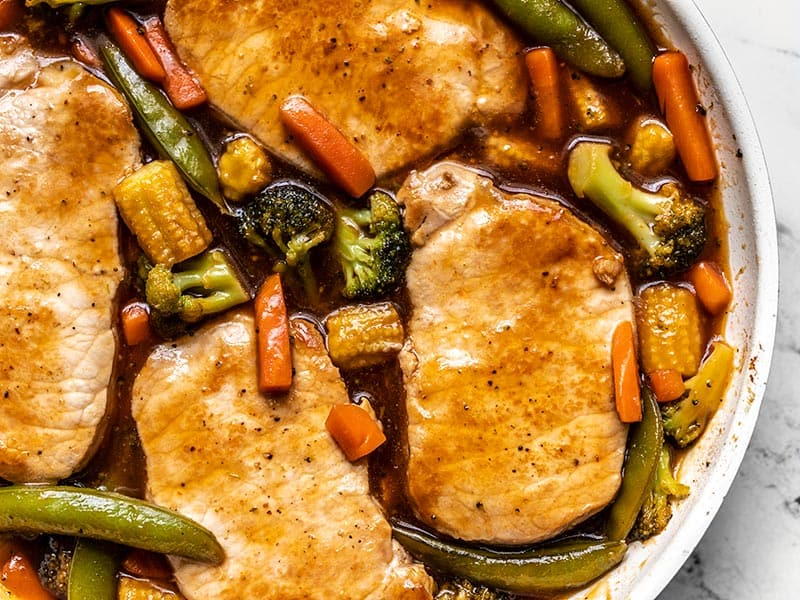 This is a SUPER simple sauce, but if you want to spruce it up a bit you can add a little grated fresh ginger, a pinch of red pepper flakes, or even a dab of sriracha or chili garlic sauce. Another option is to use my Homemade Teriyaki Sauce in place of the sweet and sour sauce.

What Kind of Pork Chops Should I Use? 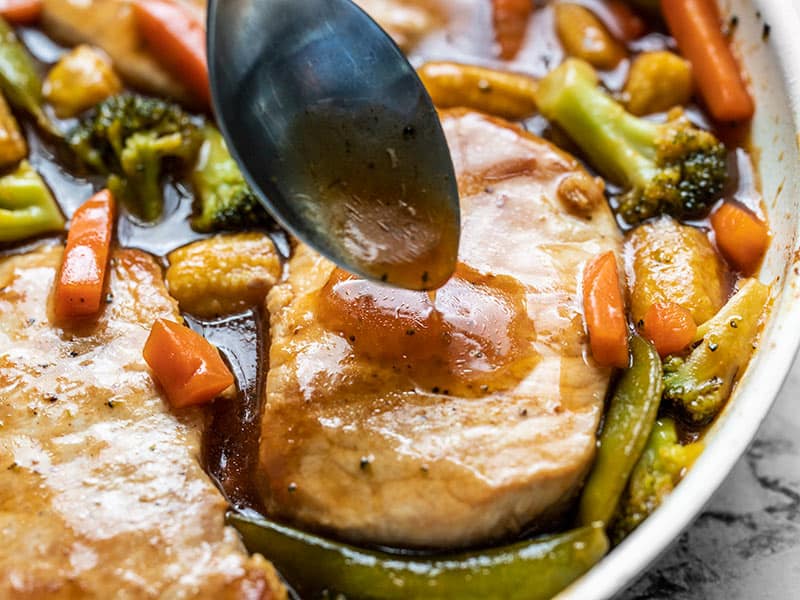 3.86 from 7 votes
A few pantry staples are needed for these juicy Sweet and Sour Pork Chops with Vegetables, making them a quick and easy alternative to take-out.
Author: Beth - Budget Bytes 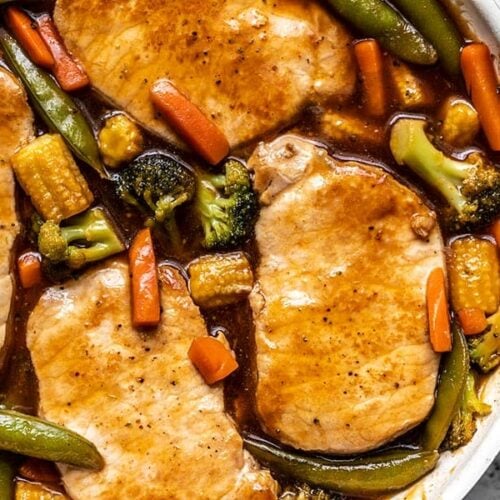 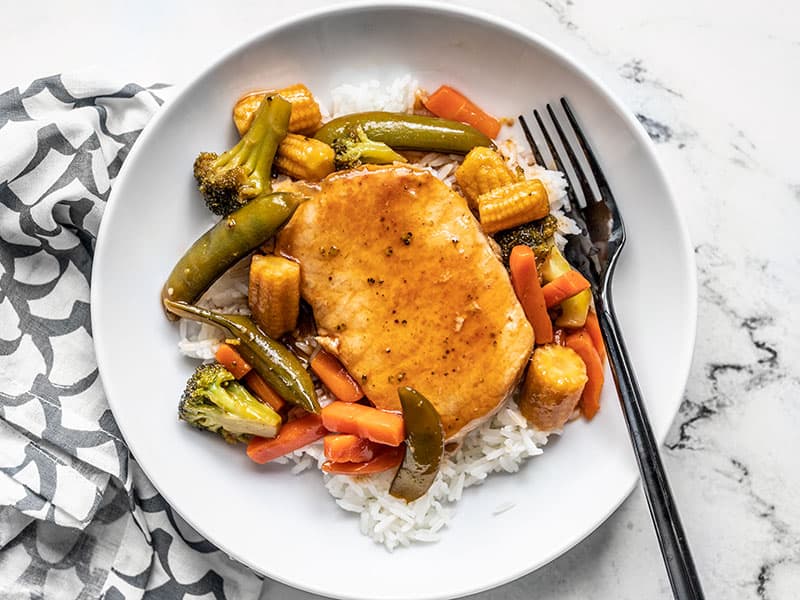 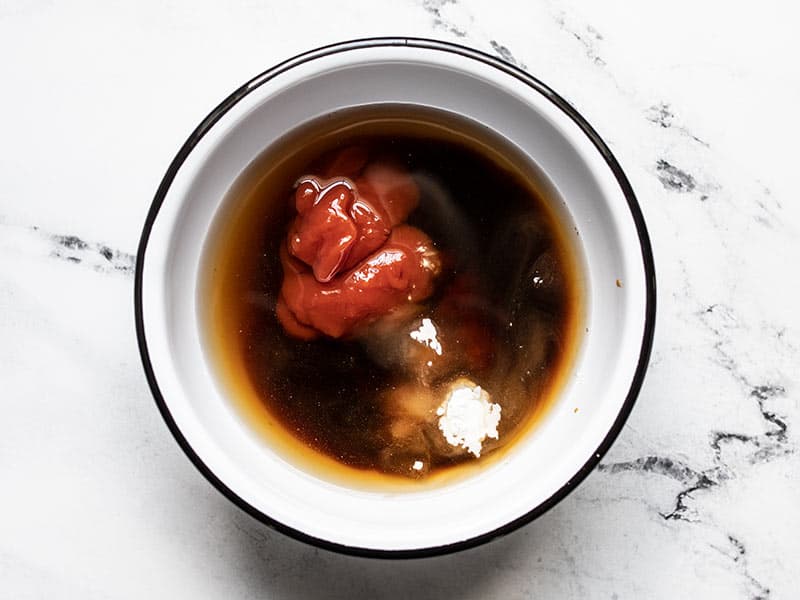 Make the sweet and sour sauce first, so it’s ready to add to the skillet when you need it. Combine 1/2 cup brown sugar, 1/2 cup rice vinegar, 1/4 cup ketchup, 1/4 cup water, 2 tsp soy sauce, and 2 tsp cornstarch in a bowl. If you want to jazz this up a bit you can always add some grated fresh ginger or even some crushed red pepper. 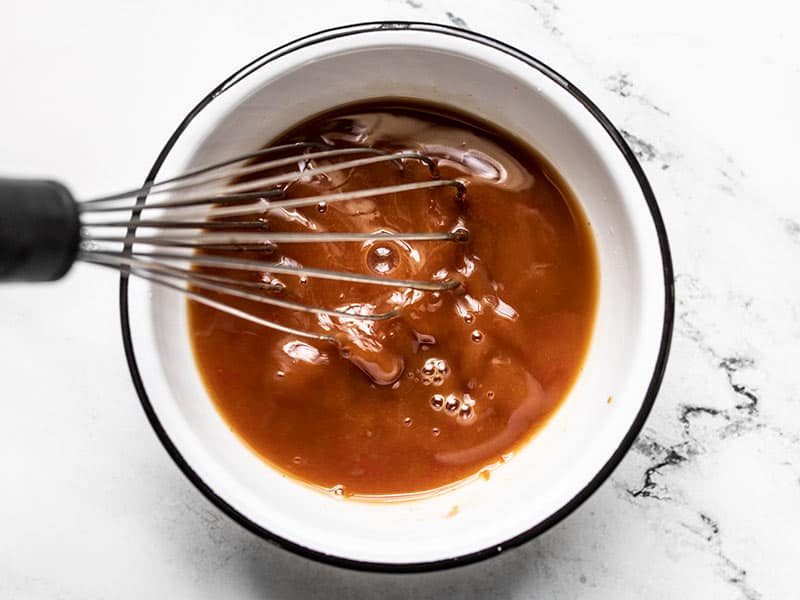 Whisk the sweet and sour sauce ingredients together until the sugar and cornstarch are dissolved. The uncooked sauce will have a cloudy brown appearance. 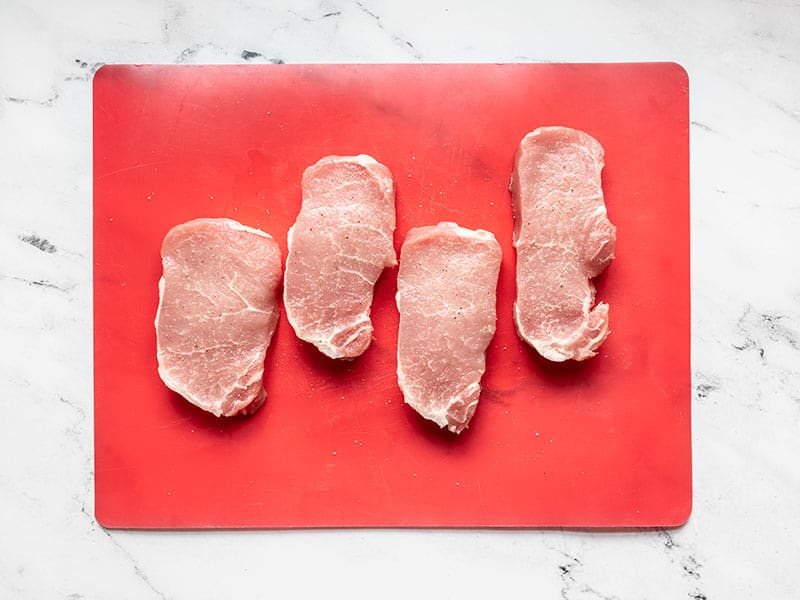 Season four boneless center cut pork chops (about 1-inch thick, 1.5 pounds total for all four) with a pinch of salt and pepper on each side. 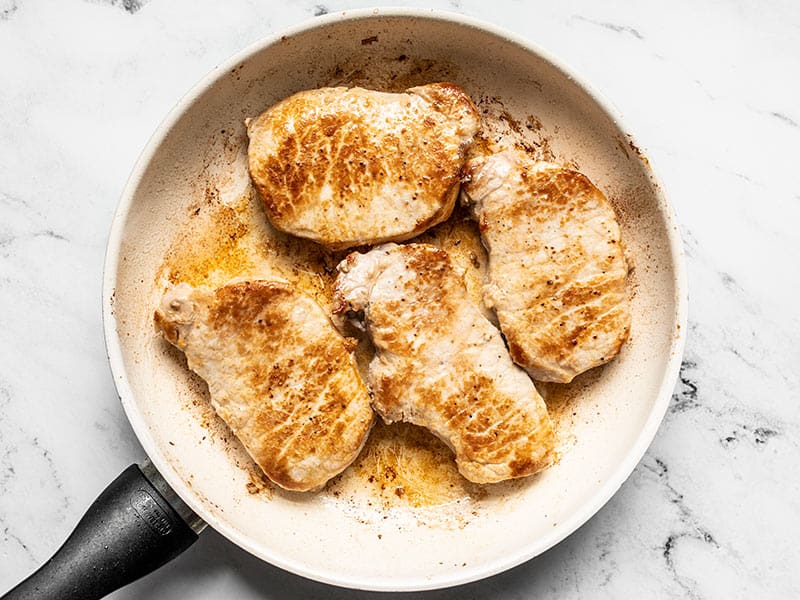 Heat a large skillet over medium, or just slightly above medium. Once hot, add 2 Tbsp cooking oil (your preferred type) and swirl to coat the skillet. Add the pork chops and cook on each side for about 5 minutes, or until they are browned. The pork will return to the skillet later, so they don’t need to be all the way up to 145ºF at this point. Remove the pork chops to a clean plate and cover with a second plate to keep them warm. 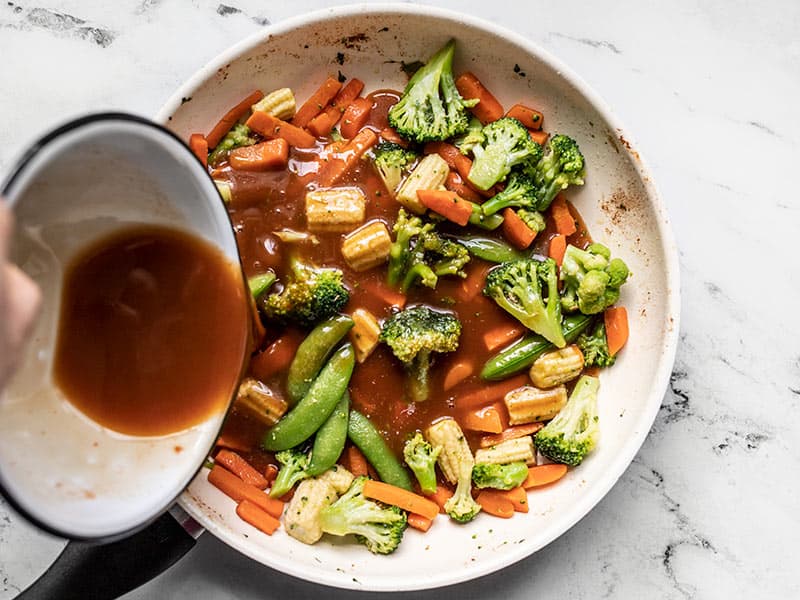 Add a 12oz. bag of frozen stir fry vegetables to the skillet and continue to cook over medium for about 2 minutes, or just until they begin to thaw. Give the sweet and sour sauce a brief stir, then add it to the skillet with the vegetables. 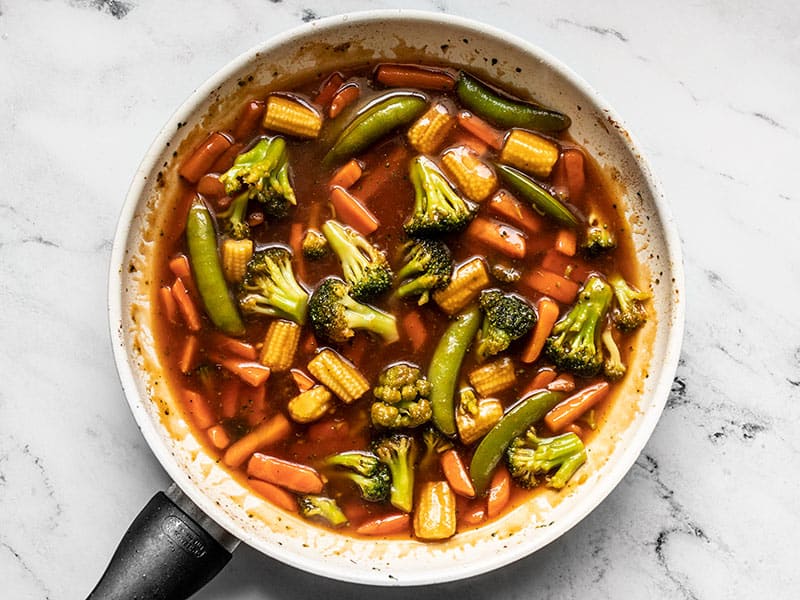 Continue to cook the vegetables and sauce, stirring often, until the sauce begins to simmer. Once it reaches a simmer, the cornstarch will thicken the sauce and it will go from cloudy to a shiny glaze. 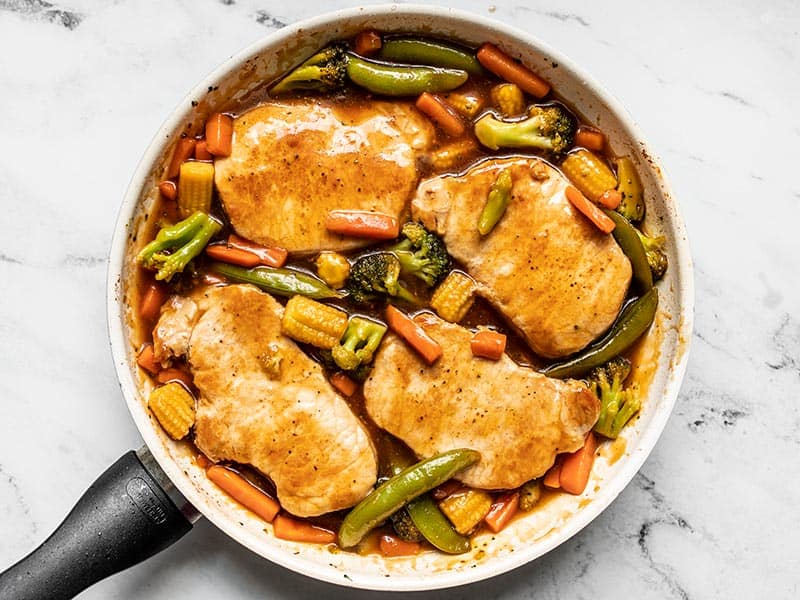 Add the pork chops back to the skillet with the sauce and vegetables, and let them simmer in the sauce for a few minutes more, or until they reach an internal temperature of 145ºF. Serve hot over rice or noodles!