There are a million pumpkin pie recipes on the web. There’s even a perfectly good recipe on the back of every single can of pumpkin purée on the store shelves. So I didn’t want to make just another basic pumpkin pie. No one needs that. Instead, I made a couple simple swaps to fancy it up just enough to make you go “Oooh…” with that first bite, but not enough that it made what is normally a very easy pie into something complicated. Enter my Maple Brown Butter Pumpkin Pie. 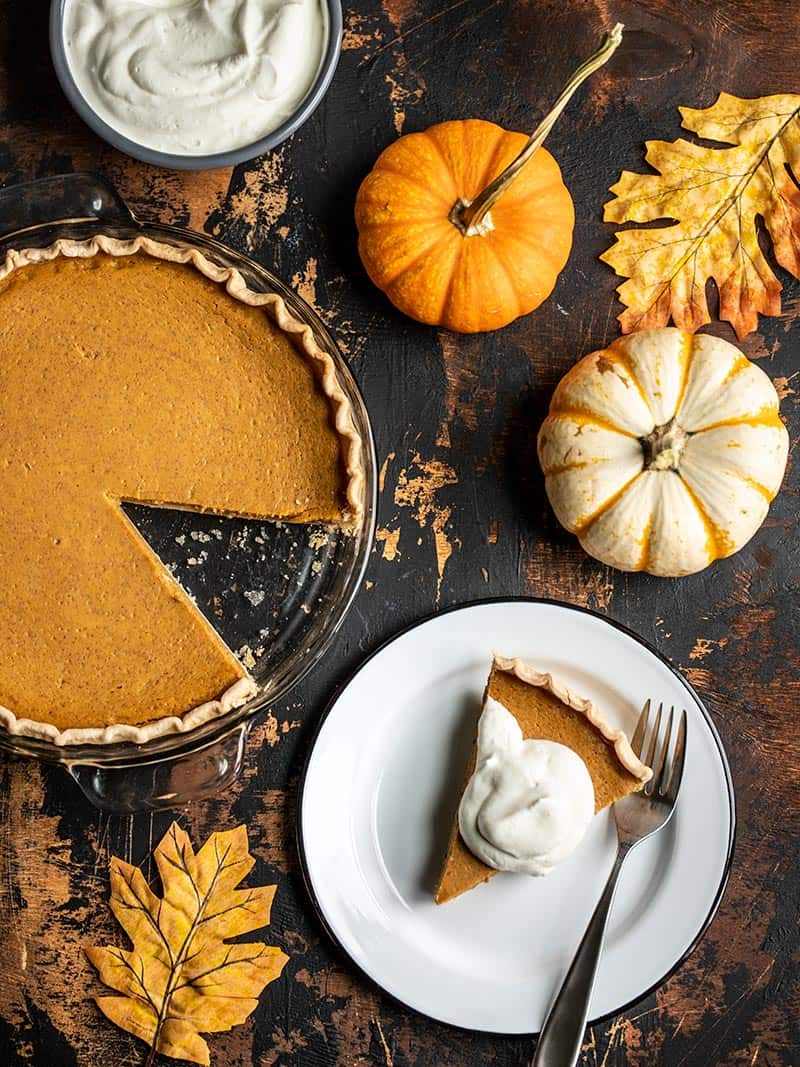 See this recipe in my Easy Thanksgiving Dinner for Beginners meal plan.

What Makes this Pie Special?

Brown butter and maple syrup. A magical combination. If you don’t know, browned butter is a magical elixir that makes any baked good even better. It gives food a wonderfully rich and nutty flavor that is unparalleled. I also switched out some of the usual sugar in this pumpkin pie for maple syrup. The results are subtle, but just enough to set this pie apart.

What Kind of Pie Crust Should I Use?

I’m not going to lie, I used a store bought pie crust. Why? Because while pie crust may seem simple on the surface (flour, fat, water), it is a bit nuanced and it’s not something I’m not super confident with yet. Plus, you have to add steps to chill the dough etc., and when it comes to pumpkin pie, I just don’t have time for that. I NEED MY PUMPKIN PIE. Not having that extra work was worth the $0.85 cents I paid for the pre-made crust.

So, you can make your own pie crust or buy a frozen or refrigerated pie crust. Whatever works for you will work for this Maple Brown Butter Pumpkin Pie. Just make sure it’s unbaked and deep dish. If using a frozen pie crust, you can pour the filling into the crust frozen, without thawing first.

If you want to make a homemade crust, a site I really trust for baked goods is Sally’s Baking Addiction. She has a Buttery Flakey Pie Crust recipe or All Butter Pie Crust recipe, both of which look great. 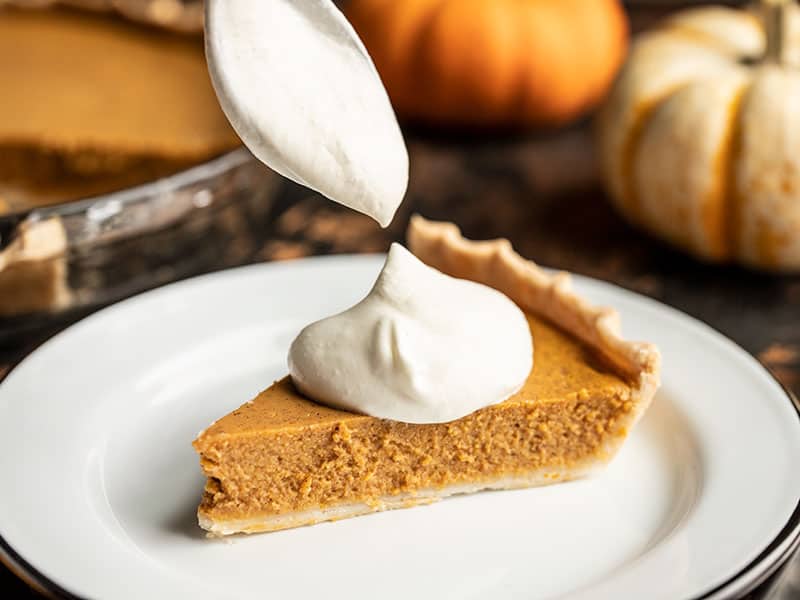 Can I Make This Maple Brown Butter Pumpkin Pie Ahead?

Yes, in fact, I suggest you make this pie ahead of time. Pumpkin pie takes a while to cook (almost an hour) and then takes another hour to an hour and a half to cool. You’ll want it to be mostly cool before cutting into it, so the custard is well set. If you refrigerate it overnight, it sets even more, and is, IMHO, even better. Just make sure it’s completely cool before refrigerating to prevent condensation.

How Long Does Pumpkin Pie Last?

Because pumpkin pie is a custard (milk and eggs) you will need to refrigerate this pie. Make sure it’s completely cool before refrigerating, then it will last about 4 days in the refrigerator, if it’s not eaten by then!

Can I Make This Pumpkin Pie Dairy-Free or Vegan?

Unfortunately, there aren’t any easy swaps for this one to make it dairy-free or vegan. Custards can be quite finicky and swapping out the evaporated milk or eggs (or brown butter for that matter), will have a massive effect on the texture. There are vegan pumpkin pie recipes out there on the web, though. So if that’s what you’re looking for I suggest following a recipe from someone who has already tested and perfected that technique (I have not). 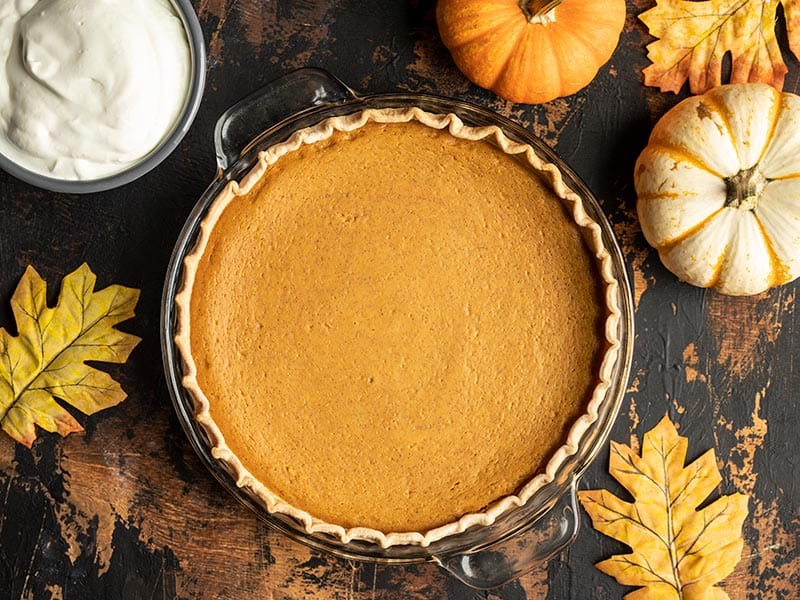 4.79 from 14 votes
This Maple Brown Butter Pumpkin Pie is the perfect special touch for your Thanksgiving dinner, without adding a lot of extra work or unusual ingredients.
Author: Beth - Budget Bytes 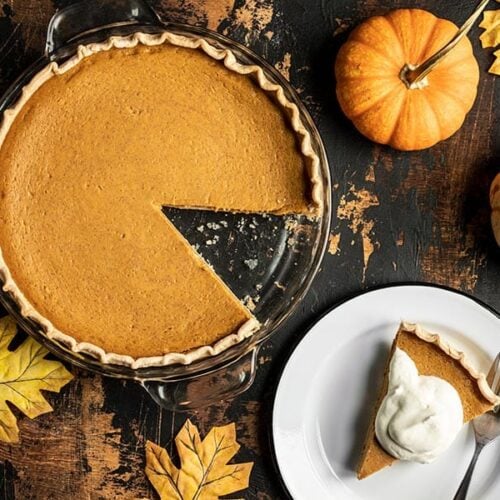 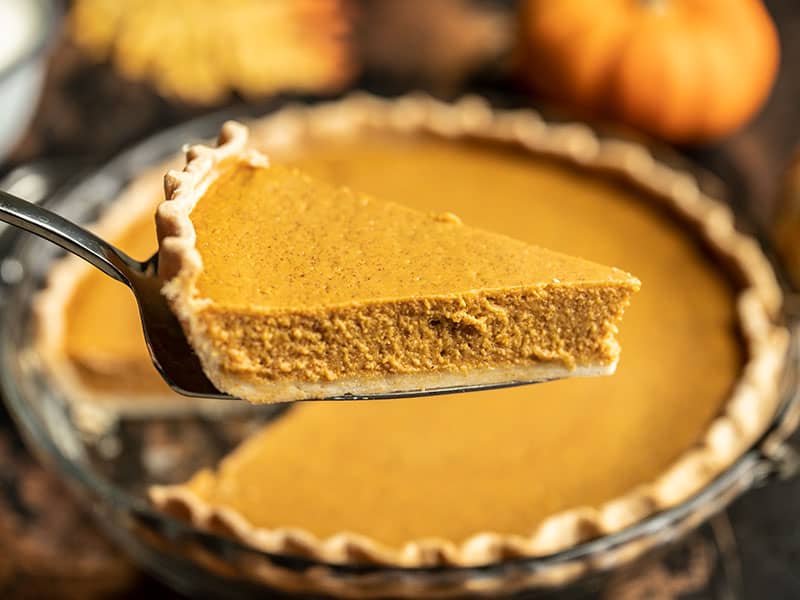 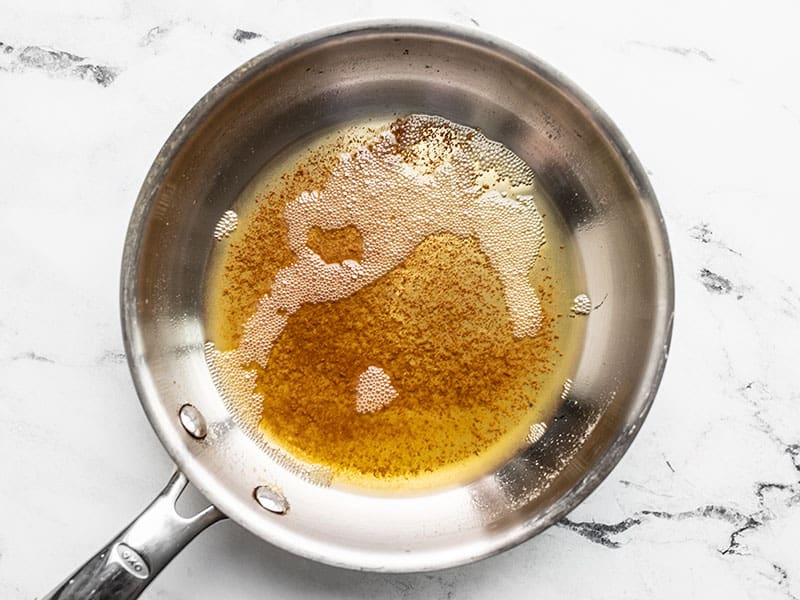 Preheat the oven to 425ºF. Cut the butter into four one-tablespoon chunks and add them to a small skillet. Heat the butter over medium heat, stirring continuously, until the butter solids sink to the bottom, turn deep brown, and take on a nutty aroma. The butter will become quite foamy before this happens, but eventually you’ll be able to see, as you stir, the browned solids on the bottom. Remove the butter from the heat immediately to prevent burning and pour the hot butter into a mixing bowl. For more detailed directions on how to brown butter, see my tutorial: How to Make Brown Butter. 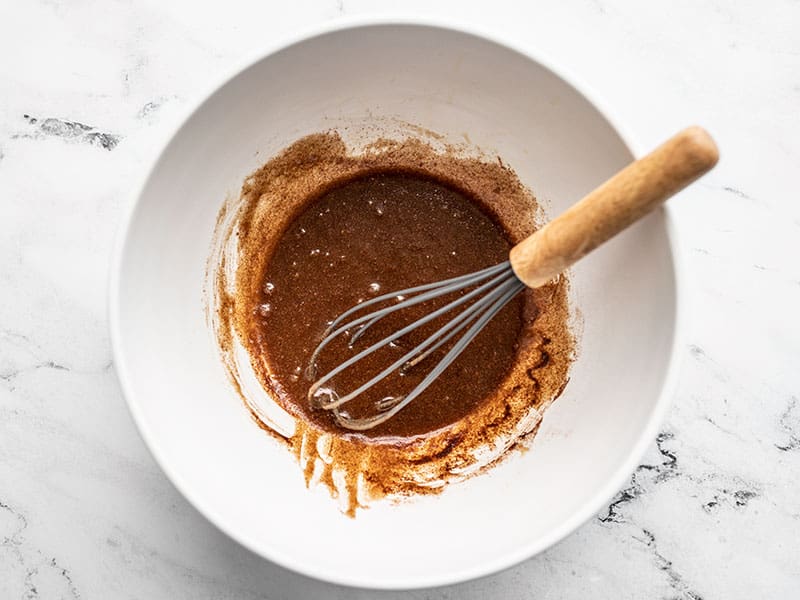 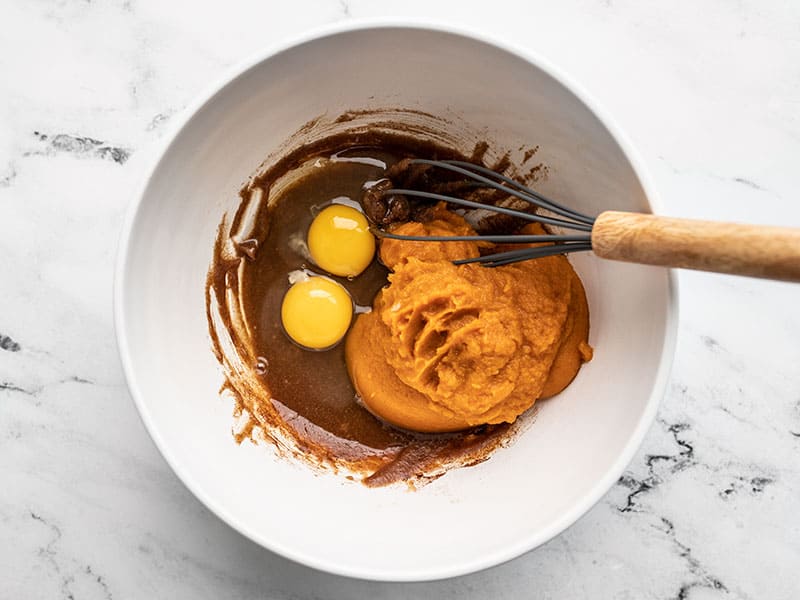 Add two large eggs and one 15 oz. can of pumpkin purée to the butter and sugar mixture, then whisk until smooth. 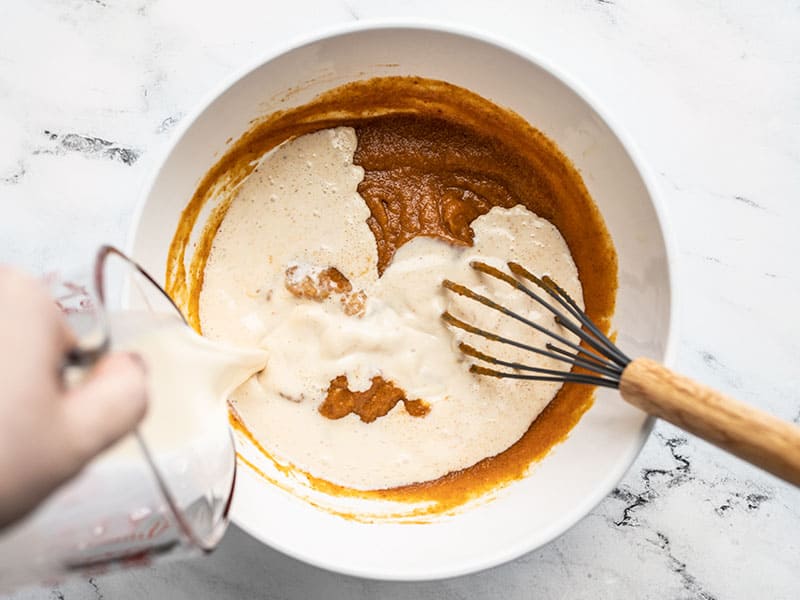 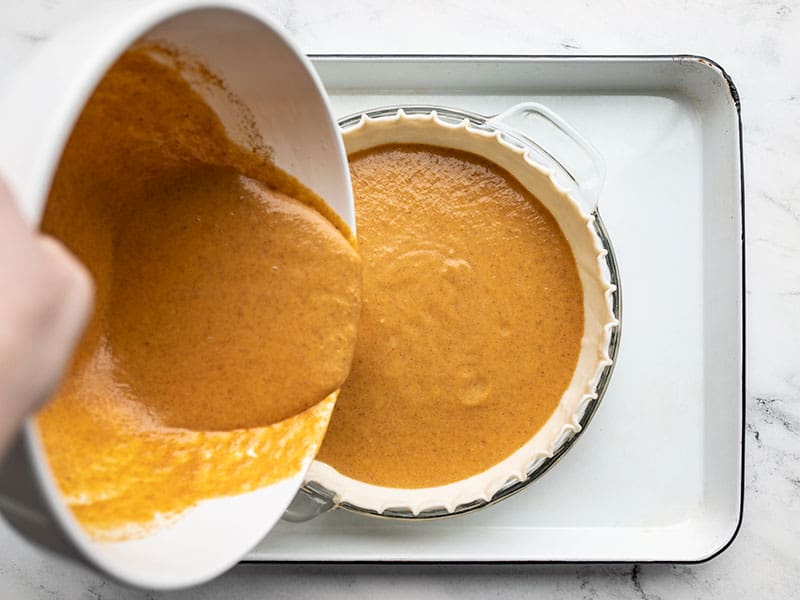 Place your 9-inch deep dish pie plate with pie crust on a baking sheet for easy transport in and out of the oven. Pour the pumpkin pie filling into the crust, then transfer to the preheated oven. 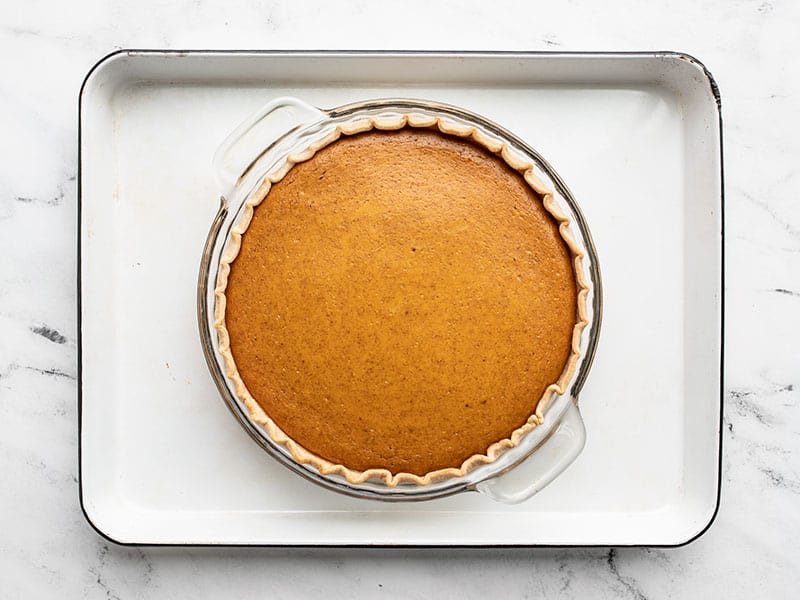 Bake the pumpkin pie for 15 minutes at 425ºF, then turn the heat down to 350ºF and bake for an additional 35-40 minutes, or until it’s domed in the center, slightly browned on the edges, and the center is no longer liquid, but still jiggles just slightly when you shake the pan. If the crust begins to brown too much as it bakes, you can cover the crust with foil to stop the browning. 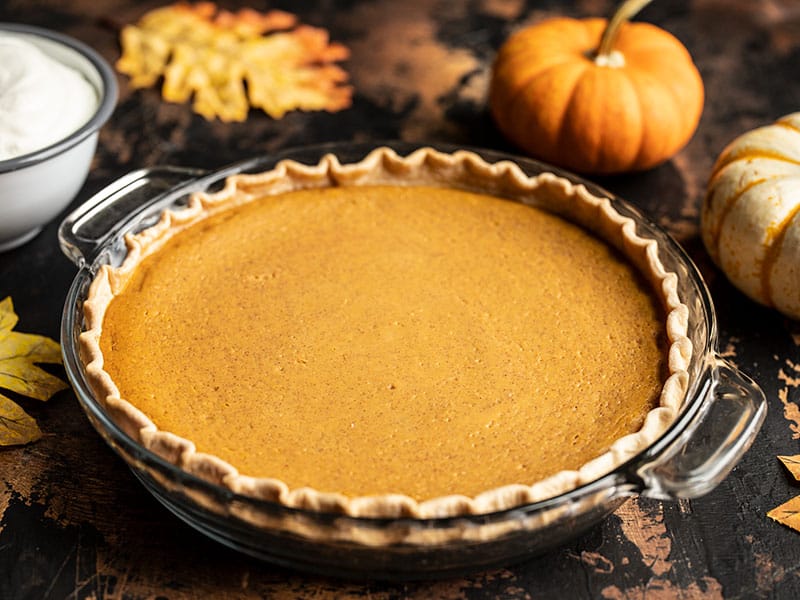 Although it may be hard, let the pie cool for at least one hour before slicing and serving so the custard can set. Once cooled, you can serve your Maple Brown Butter Pumpkin Pie or cover and refrigerate to serve the next day! 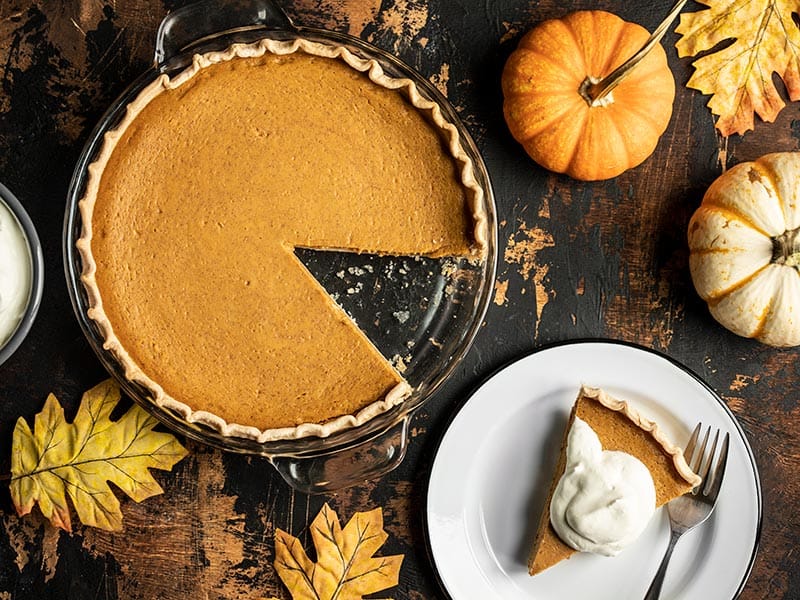