It’s been a while since I’ve made bread for the blog because I pretty much have all of the basics covered (Honey Wheat Sandwich Bread, Focaccia Rolls, Oatmeal Molasses Bread, No Knead Ciabatta, Naan, and Pita), plus several flavor variations on those staples. But sometime last week the idea for this bread popped into my head and I knew I had to make it.

I based this recipe on the Honey Wheat Sandwich Bread, but added chopped sunflower seeds for a nutty flavor… and OMG it’s SO GOOD. The nutty bits are a perfect compliment to the very slight honey flavor and it tastes great with just a slather of butter or toasted with peanut butter (that’s been my breakfast for the past week).

You can make two smaller boules like I did, or one big loaf (either a round boule or it can be placed in a loaf pan). Just be sure to extend the baking time slightly if you make one loaf instead of two. You’ll want to use raw sunflower seeds instead of roasted because roasted usually have added oil and salt that will mask their pure nutty flavor and cause the bread to be overly salty. I bought my sunflower seeds from the bulk bins so that I could buy the exact amount I needed worrying about leftovers.

I think you’re gonna love this one! 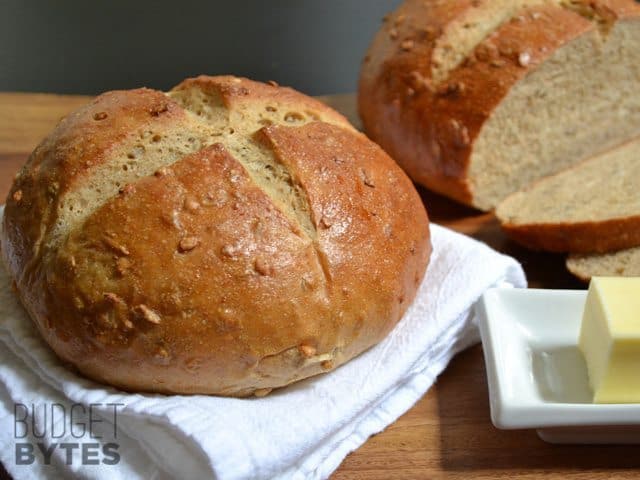 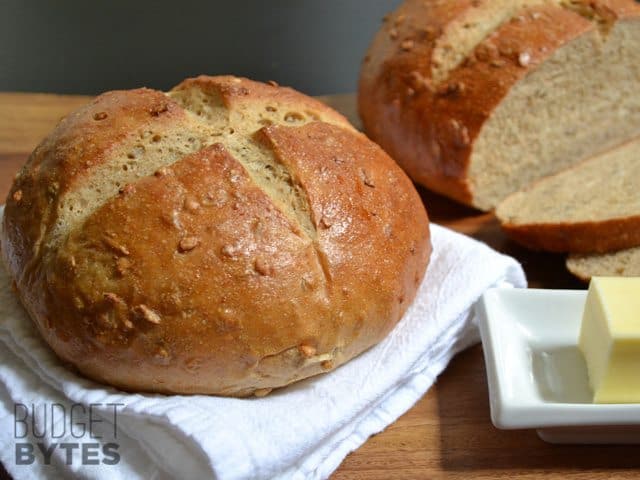 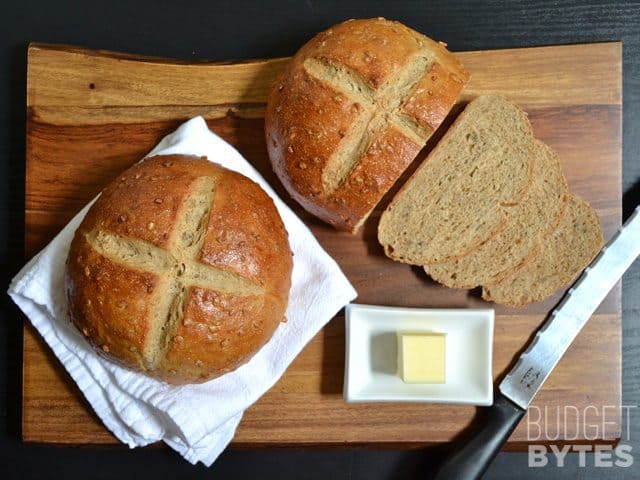 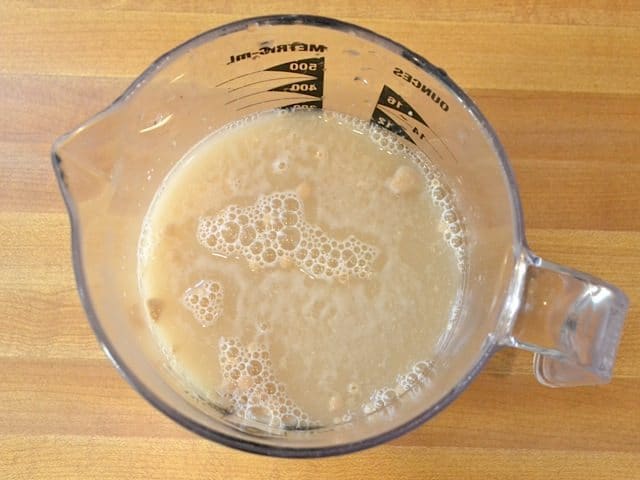 Dissolve the yeast and honey in warm water. Let this sit while you prepare the next ingredients. I use the hottest water that will come out of my tap, which is around 110 degrees. It shouldn’t be so hot that it will burn you, or else it may very well kill the yeast, too. 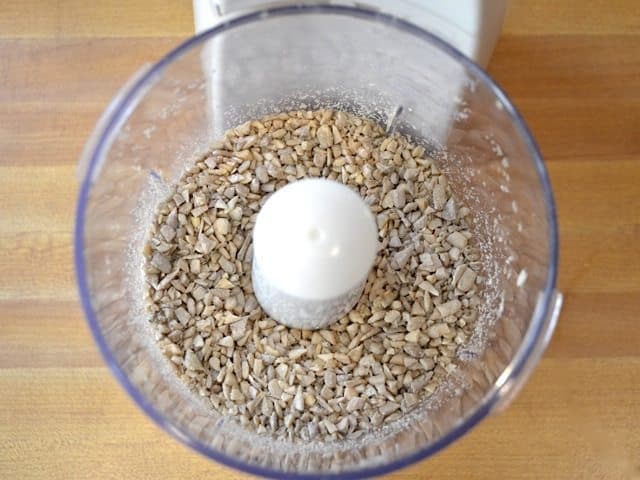 Roughly chop the sunflower seeds so that the pieces and their flavor are more evenly distributed throughout the bread. You can use a knife or a mini-food processor like I did. 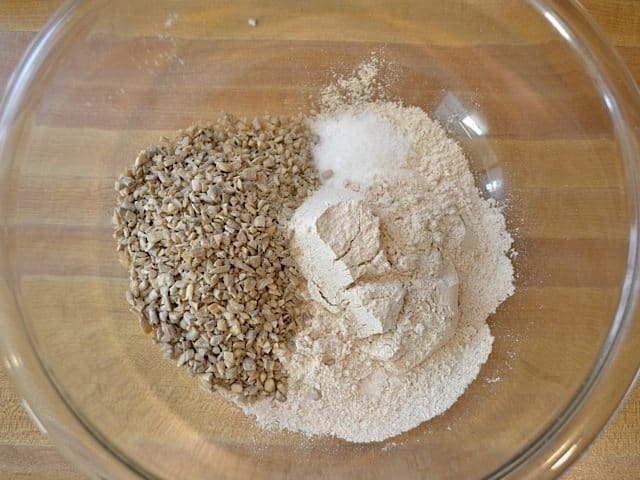 Add the chopped sunflower seeds to a bowl with ONE CUP of the whole wheat flour and the salt. Stir these together until they are evenly combined. 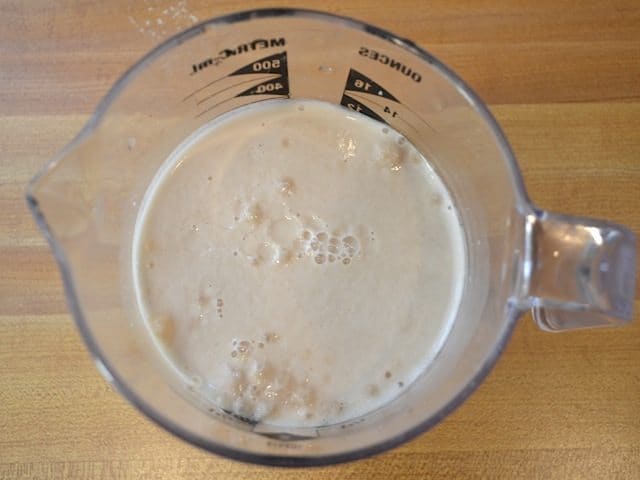 By this time, the yeast will have gotten all foamy and frothy in the water. If it is not, your yeast may not be active. 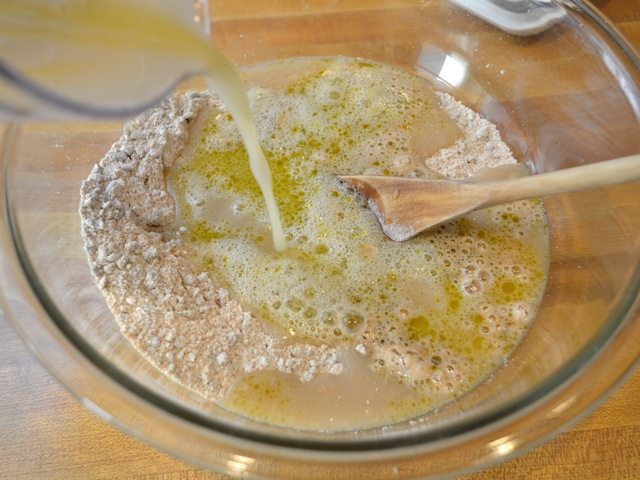 Add the olive oil to the yeast water (it won’t really stir in because oil & water, you know…) and then pour it into the bowl with the flour, sunflower seeds, and salt. Stir the mixture until it is smooth. Add the last 1/2 cup of whole wheat flour and then stir until smooth again… add 1/2 cup of all-purpose flour and then you should have… 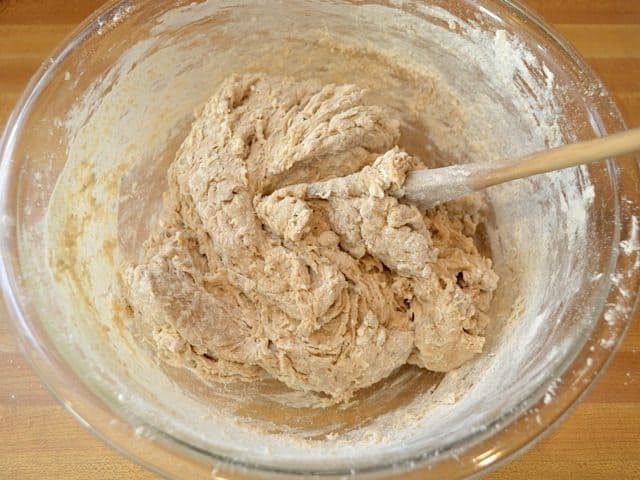 A shaggy ball of dough that you can no longer stir with a spoon. This is the point that you stop stirring in flour and start kneading it in. 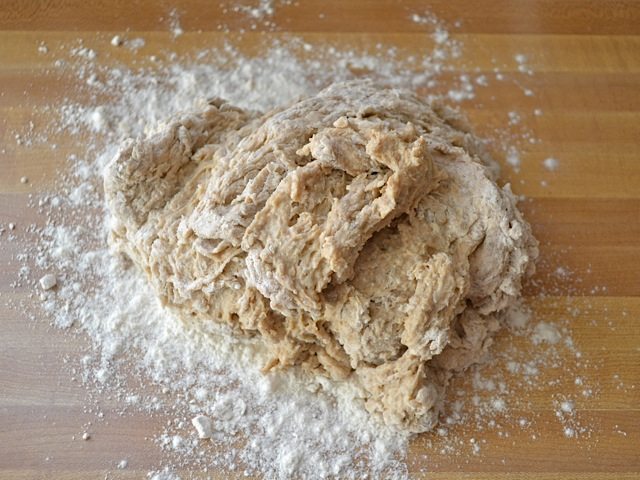 Take the dough out of the bowl and place it on a floured work surface. Knead it for about five minutes, adding more all-purpose flour as you go. 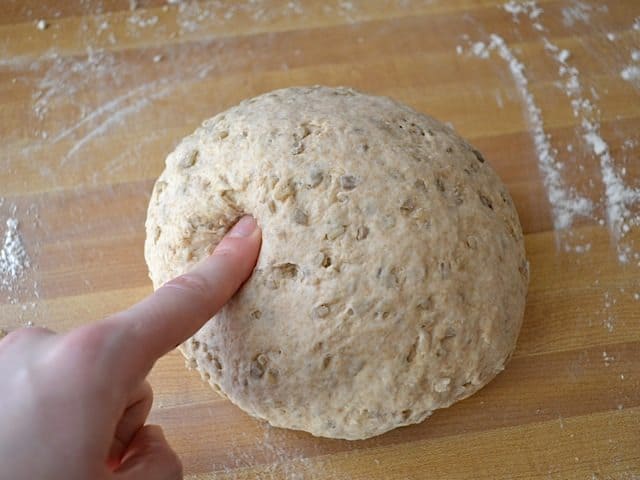 After five minutes you should have used about 1.5-2 cups of all-purpose flour total, and it will spring back when you poke it with your finger. The dough should still be slightly soft, supple, and not sticky at all. It shouldn’t be so hard that you can’t knead it (that means you’ve added too much flour and your final product will be very dense). 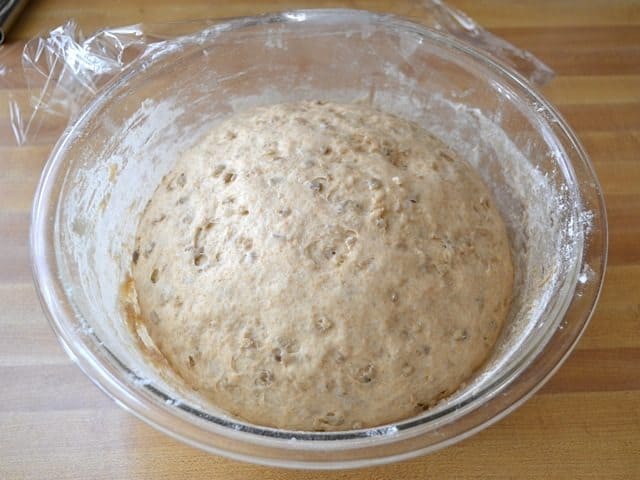 Put the dough back into the mixing bowl and cover it loosely. Let it rise until double in size (about 1 to 1.5 hrs). This picture is after it has risen. 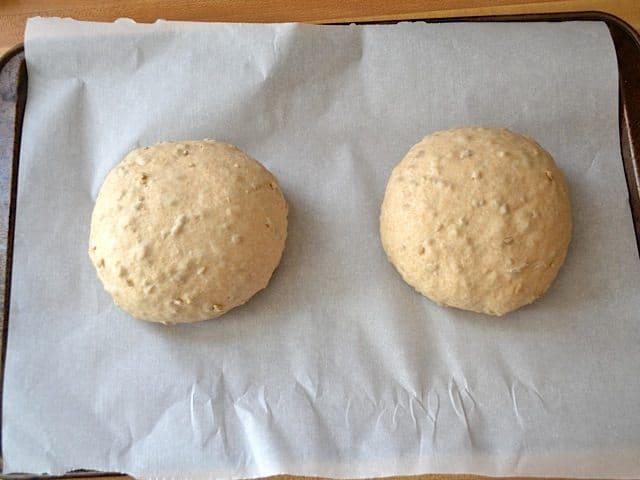 Deflate the dough (by punching it down), divide it in two, and then shape each half into a ball. Place the dough balls on a baking sheet lined with parchment paper. Make sure to leave enough room between them so that they don’t touch once they have risen. Cover them loosely with a damp towel so they don’t dry out, and then let them rise until double again (another 1 to 1.5 hrs). 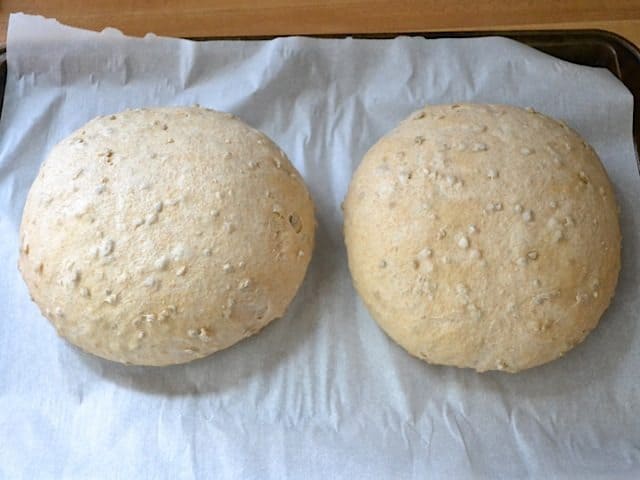 Once they’re double in size, begin preheating the oven to 400 degrees. You can bake them just like this or make them pretty… 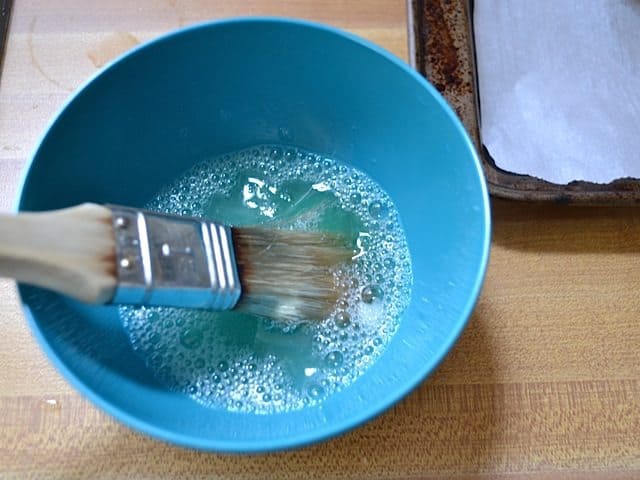 To get a really nice brown, glossy crust you can use an egg wash. Whisk together an egg white with a tablespoon or so of water and then brush it over the loaves. If you don’t want to waste an egg, milk is a good wash that will help it brown, but it leaves a matte finish rather than a glossy finish. OR, you can just bake them as is. 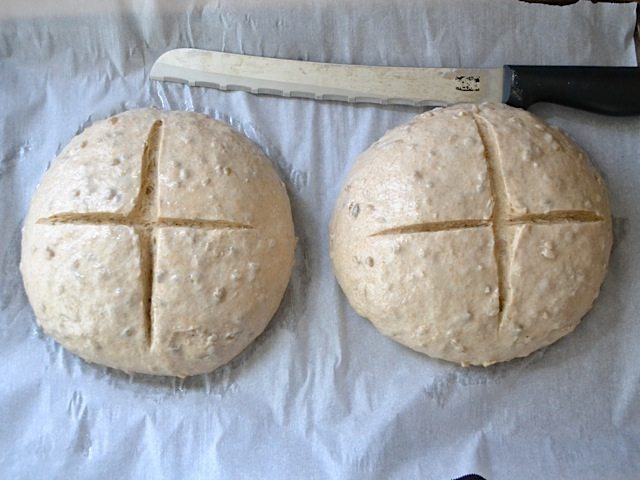 To make the pretty design on top, use a very sharp knife to gently slice an X in the top of each loaf. The trick to this is to A) use a super sharp knife and B) use NO downward pressure. Just drag the knife horizontally and let the sharp edge slice the loaf open. I only cut about 1/2 inch deep. 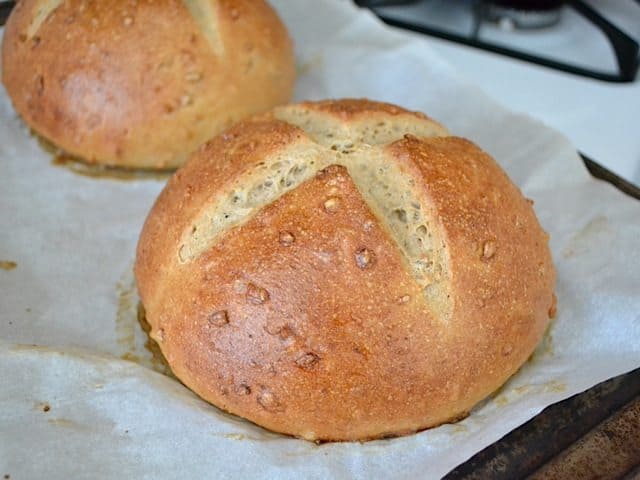 Then just bake the bread in the preheated oven for about 25 minutes (start checking it at 20 in case your oven runs hot). Bake until the crust is nicely browned. 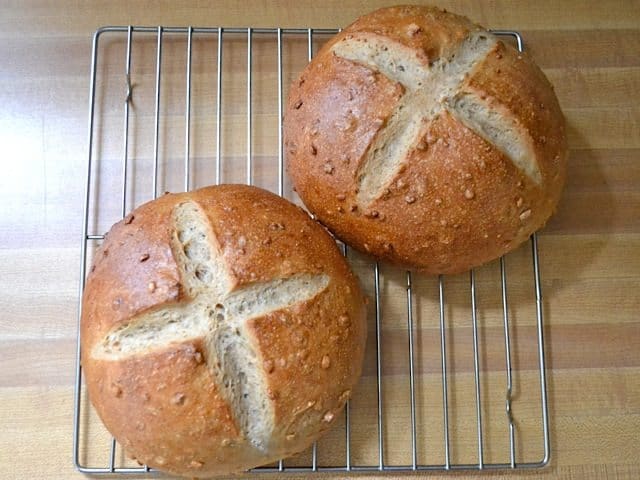 Seriously, how gorgeous is this bread? And it tastes every bit as delicious – no lies.