Two things that are always in my refrigerator and freezer are eggs and frozen spinach. I haven’t had creamed spinach in quite some time, so when I decided to make some the other day I figured I’d throw a few eggs on top and bake it all up into a delicious brunch delight. Why not? Oh, and I had some feta too, so I threw that on top for extra flair. The feta definitely took these Creamed Spinach Baked Eggs from “this is pretty good” to “Yassssss girl.” 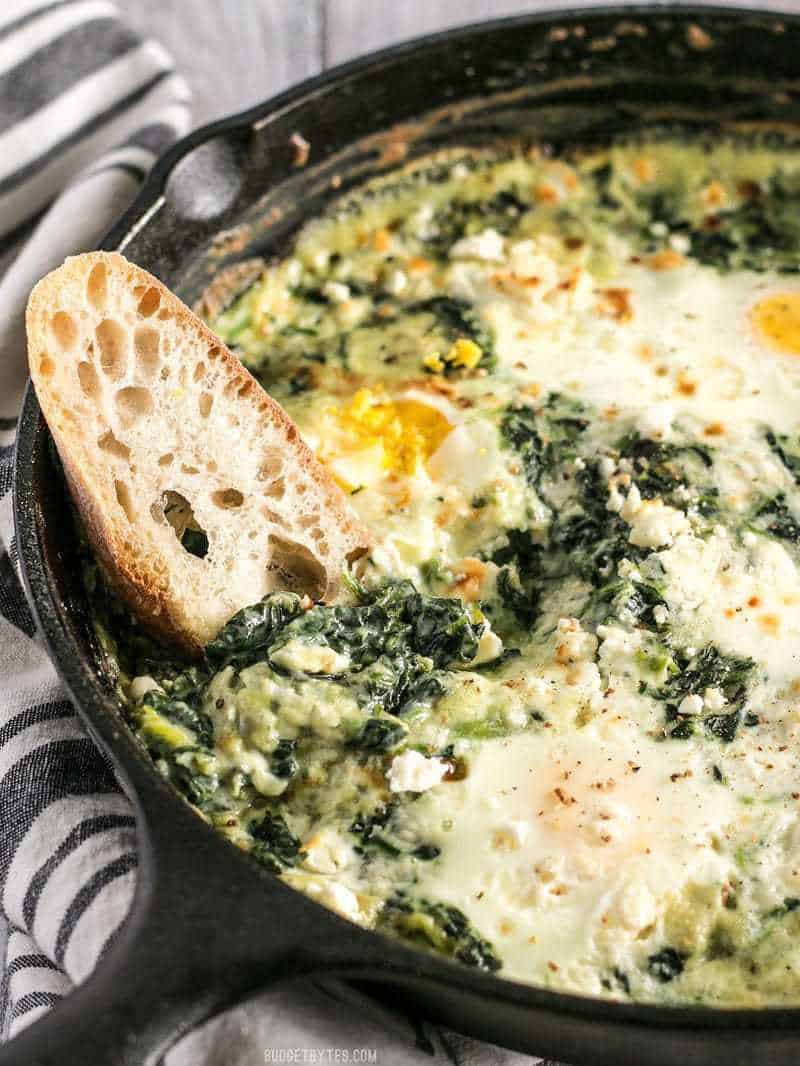 Do I Have to Use a Cast Iron Skillet?

I’m using a 10″ Lodge Cast Iron Skillet (affiliate link), but you don’t have to make this recipe in a cast iron skillet. Any other oven safe skillet will work, OR you can just transfer the creamed spinach to a small casserole dish before adding the eggs and feta, and tossing it in the oven.

The bake time for these eggs is a little variable, so take the suggested 15 minutes with a grain of salt. You’ll want to watch the eggs closely starting at around 12 minutes and take them out when they reach your level of doneness. I decided last minute to broil my dish for a few minutes to get some browning on top, which ended up cooking my yolks through.

Normally I would have left the yolks runny, but it was still great with them fully cooked. If you do want some browning from the broiler, I would take 5 minutes off the bake time before switching from bake to broil (middle rack) and again, watch the dish closely.

4.64 from 22 votes
Make these fast and easy Creamed Spinach Baked Eggs using items you probably have in your pantry. A little feta on top takes it to the next level!
Author: Beth - Budget Bytes

*I suggest frozen CHOPPED spinach as opposed to frozen CUT spinach, which is usually in longer pieces and has more of a stringy texture. 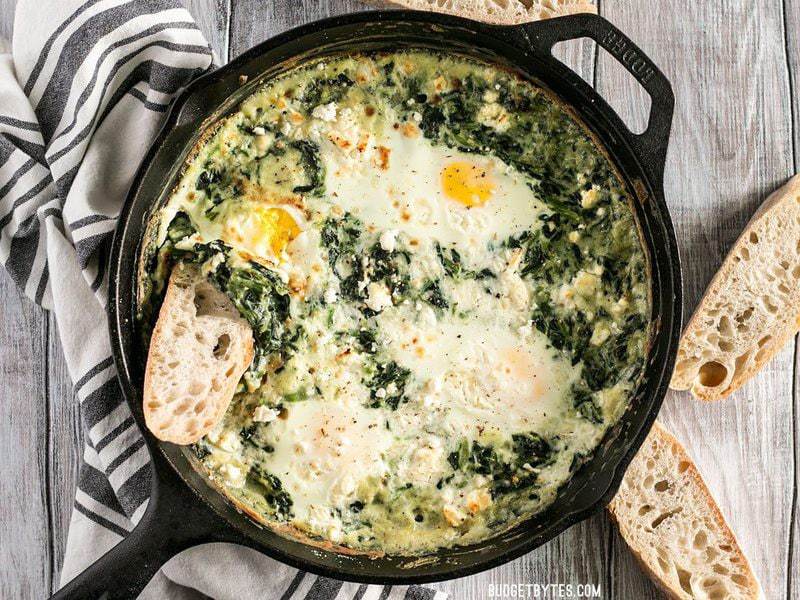 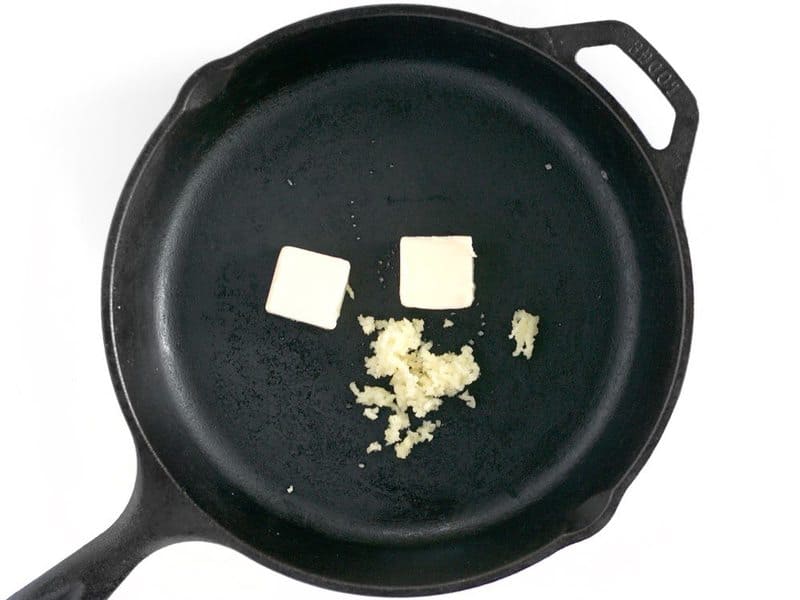 Begin by preheating your oven to 400ºF. Add 2 Tbsp butter and two cloves of minced garlic to a skillet. Sauté the garlic in the butter over medium heat for about one minute, or just until the garlic becomes very fragrant. Whisk in 2 Tbsp all-purpose flour and continue to whisk and cook for about two minutes more. The flour and butter mixture will create a paste that foams and bubbles as it cooks. 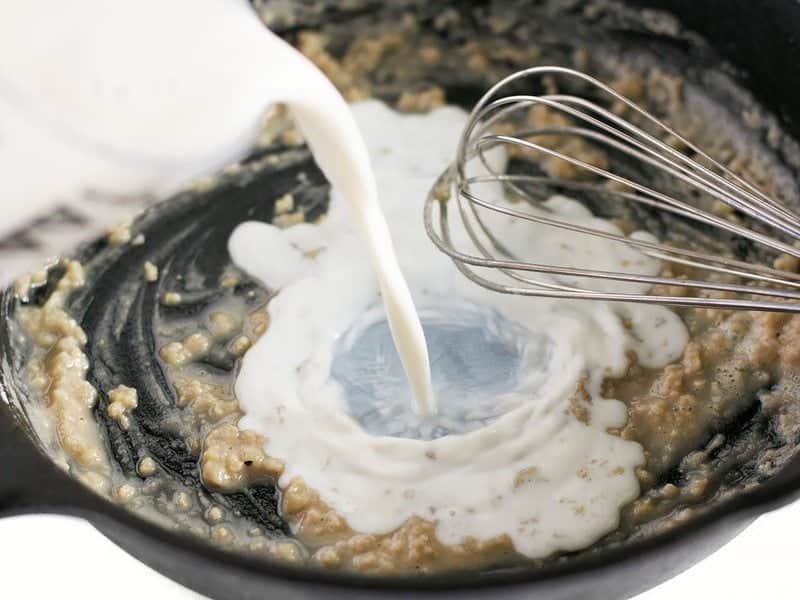 Whisk 1.5 cups whole milk into the butter and flour mixture until no lumps remain (you will still be able to see the minced garlic pieces, just make sure there are no flour lumps). Add 1/4 tsp salt, 1/8 tsp nutmeg, and some freshly cracked pepper (about 10 cranks of a pepper mill). 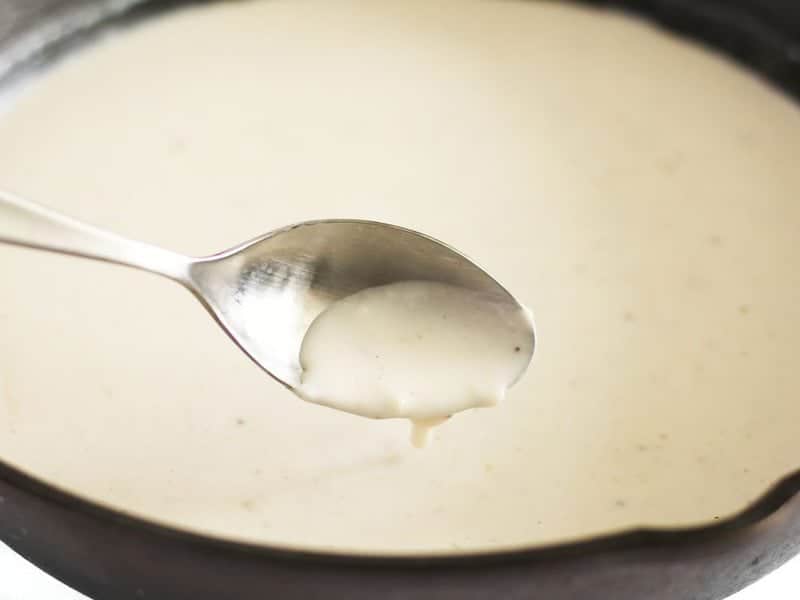 Continue to cook and whisk over medium heat until the milk comes up to a simmer, at which point it will thicken to a gravy-like texture. 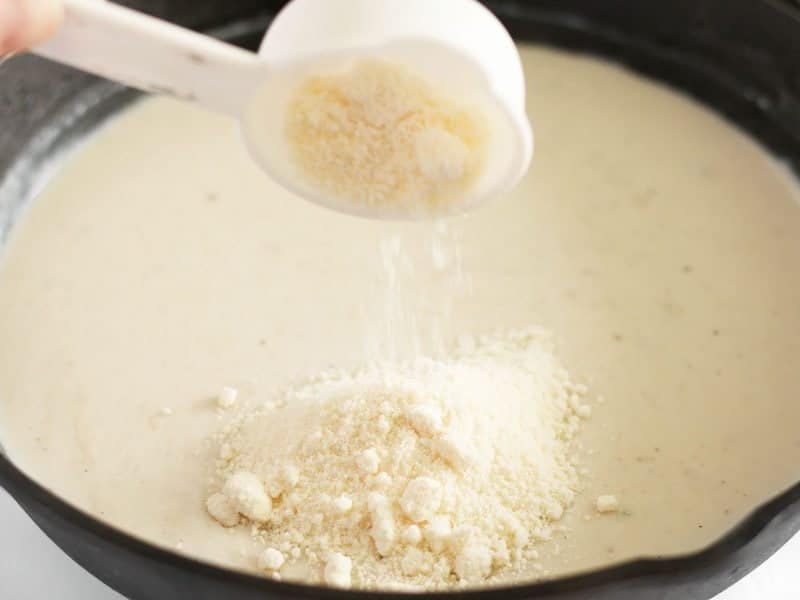 Stir in 1/4 cup grated Parmesan until it has melted into the sauce. 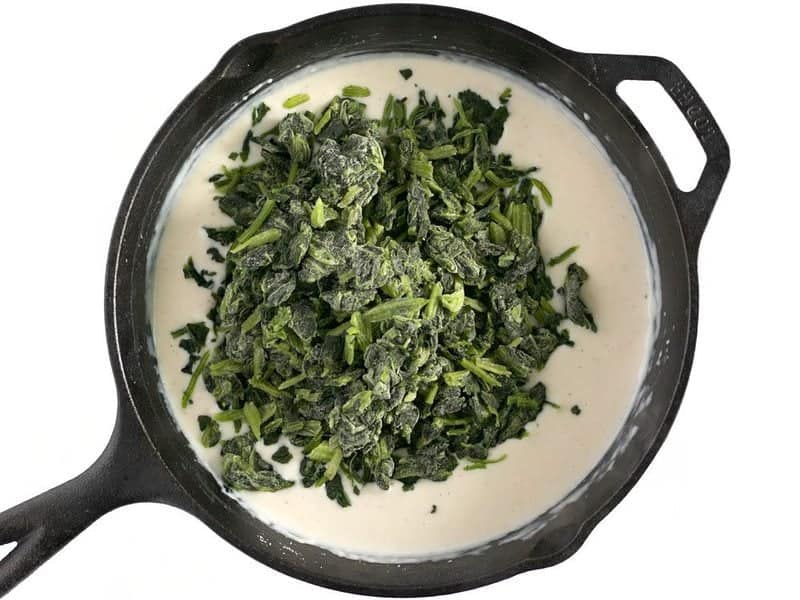 Add 3/4 lb. frozen CHOPPED spinach (no need to thaw). I highly suggest frozen “chopped” spinach as opposed to frozen “cut” spinach, which has larger pieces and tends to be a bit stringy. 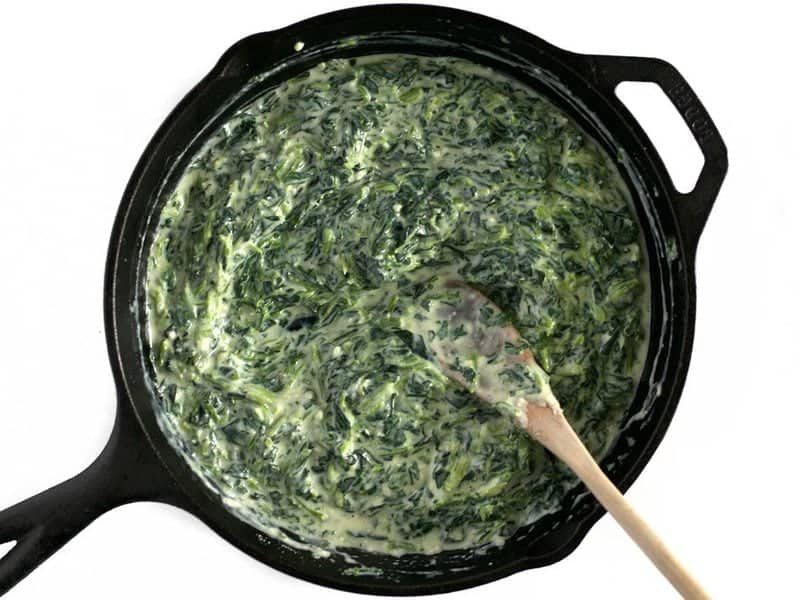 Continue to stir and cook the spinach and sauce until it is heated through. Give the spinach a taste and add more salt, if needed. 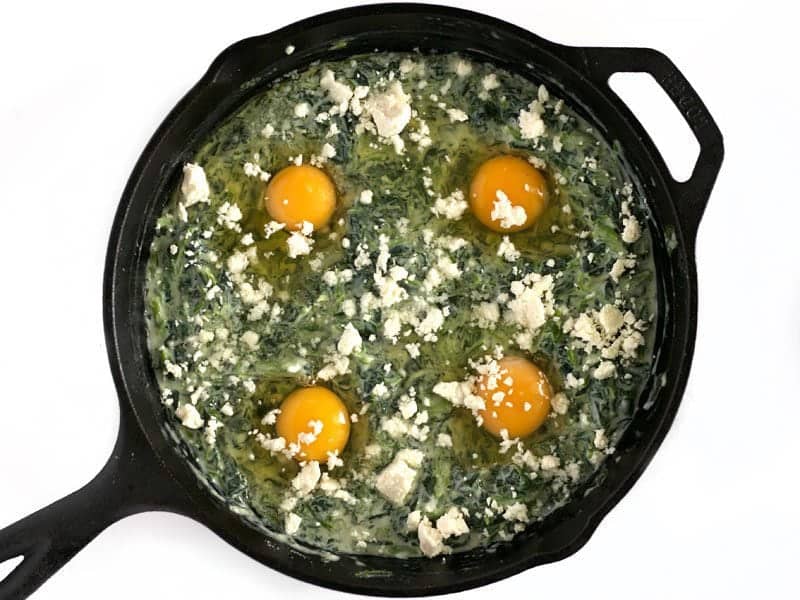 Use a large spoon to make four wells in the creamed spinach, then crack one egg into each. It’s okay if the egg whites run outside of the wells. Sprinkle 2oz. crumbled feta over the entire skillet. 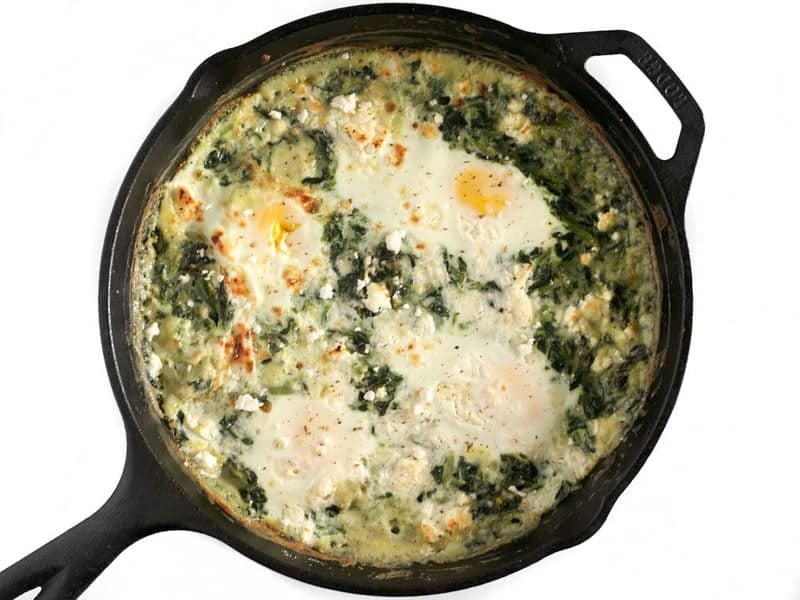 Bake the creamed spinach and eggs for about 15 minutes in the preheated 400ºF oven, or until the whites are set (this will vary depending on your oven and your preferred level of doneness for the eggs). If you want a little browning on top, I suggest switching the oven’s setting from bake to broil at about 10 minutes and finish it out on the broil setting. Broiling can brown the top and cook the eggs quickly, though, so watch it closely. 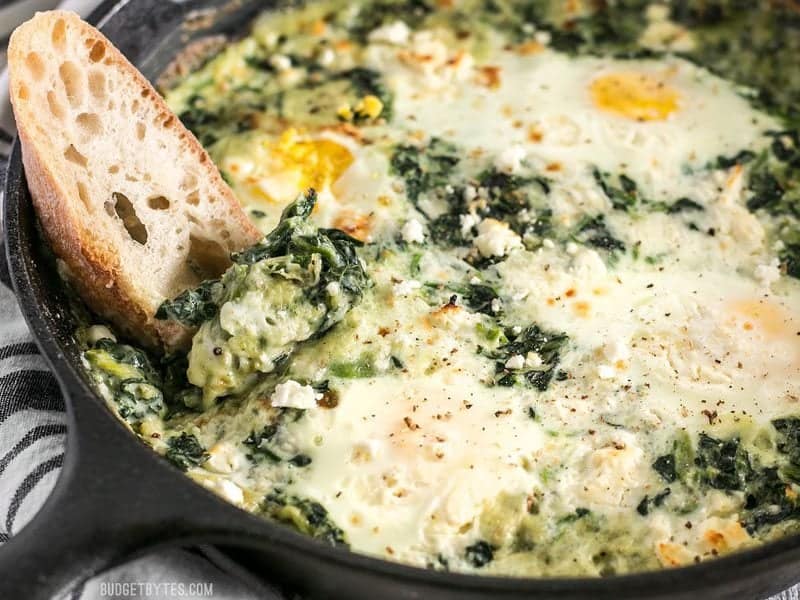 Scoop the creamed spinach and an egg into each bowl and serve as is or with some toast for dipping! 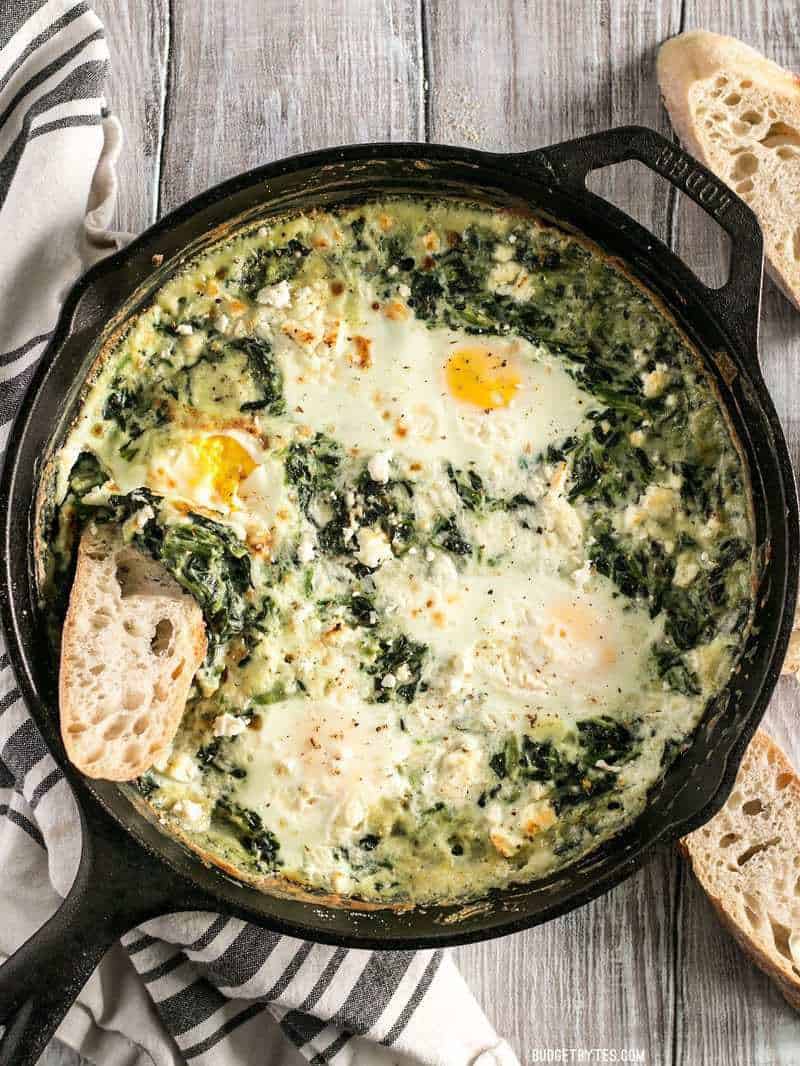