I don’t make muffins often, but when I do I want them to be big, fluffy, and totally epic like the ones you get at a bakery. And since these Triple Berry Oatmeal Muffins are apology muffins (to replace my boyfriend’s muffin that my dog ate), I needed to make sure they were on point. The muffin tops are big and delicious, they’re dotted with juicy berries, and even have a little oatmeal goodness mixed right in. These will be my go-to muffins in the future. And hopefully next time I’ll be making them just for fun, not as an apology. 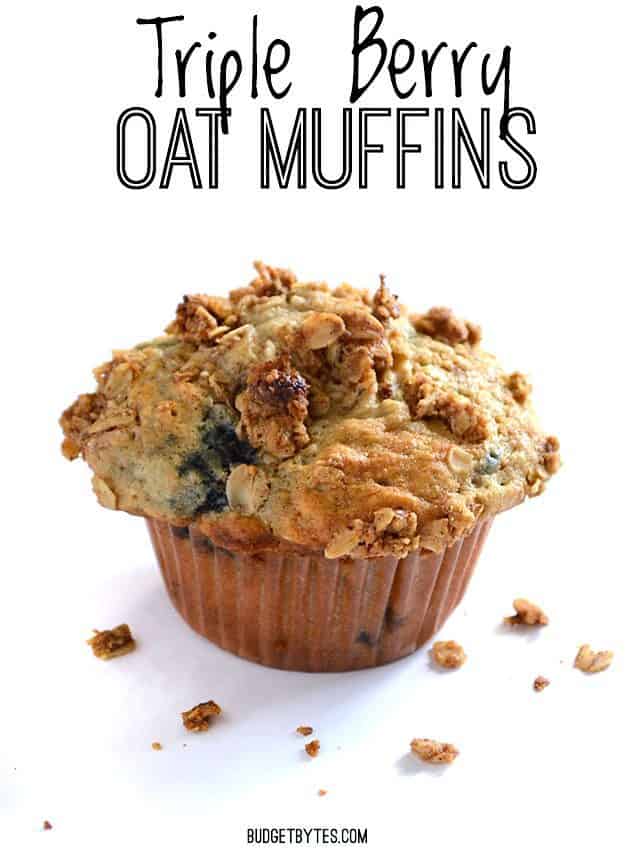 I wanted to make these oatmeal muffins resemble the big delicious muffins that you buy from a bakery, but try to sneak in at least a little something healthy. I used King Arthur Flour’s basic muffin recipe, but subbed in rolled oats, as per their notes, and some frozen berries that I had stashed in my freezer. I was at the very end of my all-purpose flour, so I used a 1/4 cup whole wheat flour to make up for what I was missing. And hey, that’s more fiber! Lastly, I added a touch of cinnamon to the batter, and made a delicious cinnamon-oat crumble topping. Yaasssss.

What Kind of Oatmeal Can I Use?

I used old-fashioned rolled oats because that’s what I always have on hand and they have the most delicious hearty texture. You can probably get away with using quick oats, which are much thinner and flakier, but your muffins won’t have quite as much texture.

How to Freeze The Leftovers

If you don’t have a friend and a dog to help you eat the whole batch, oatmeal muffins freeze really well. Just make sure they are fully cooled before wrapping them tightly in plastic and then zipping them up in a freezer bag. The frozen muffins thaw fairly quickly at room temperature or can be reheated briefly in the microwave. 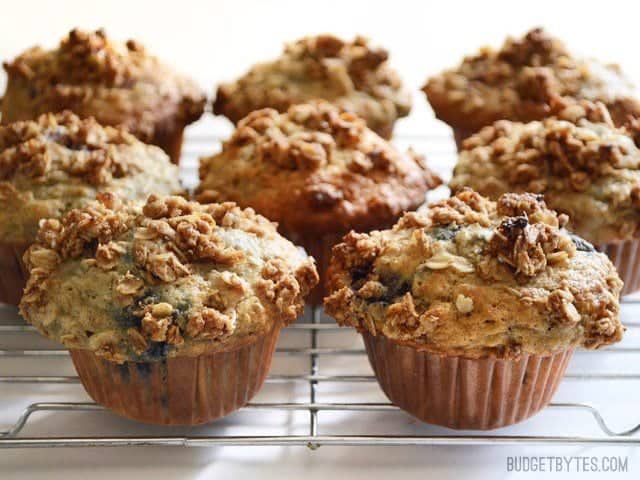 4.78 from 22 votes
These big, moist, and fluffy Triple Berry Oatmeal Muffins are a real treat for breakfast and boast the goodness of rolled oats. Freezer friendly!
Author: Adapted from King Arthur Flour 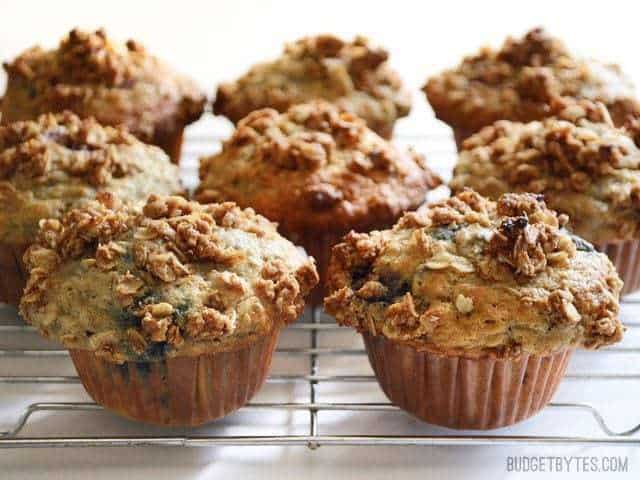 Try These Other Muffin Recipes: 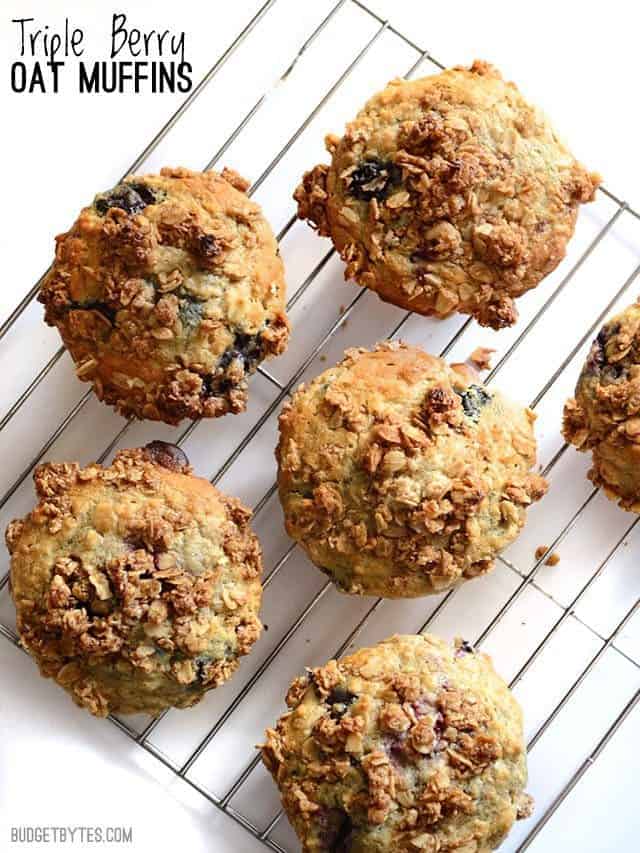 How to Make Berry Oatmeal Muffins – Step by Step Photos 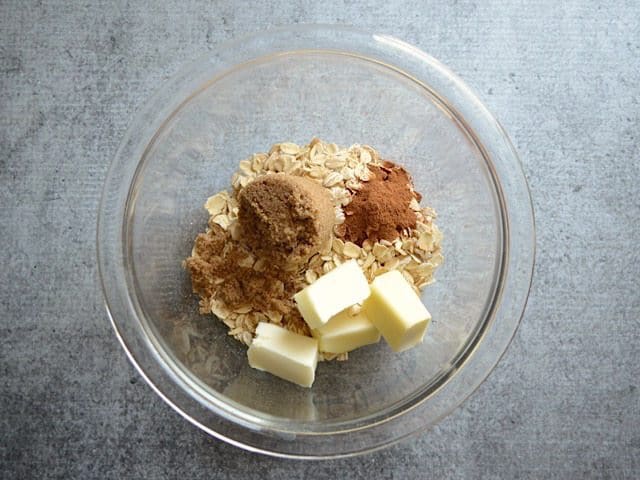 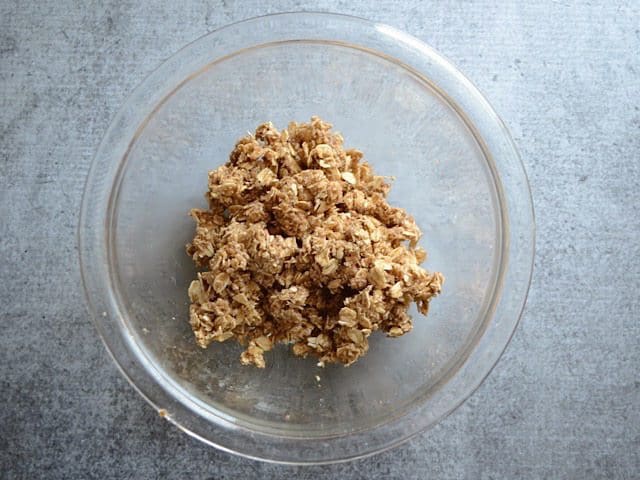 Massage the ingredients into the butter until it forms a well mixed “crumble” texture. Refrigerate the topping until it’s ready to go on the muffins. 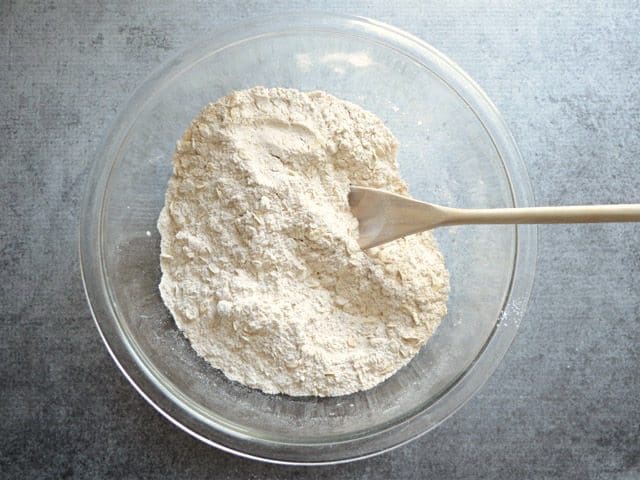 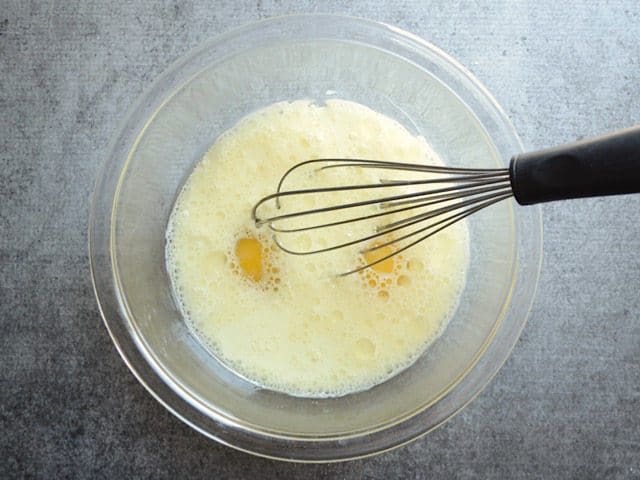 In a separate bow, whisk together 2 large eggs, 1 cup milk, and 1/4 cup vegetable or canola oil. Whisk until smooth. 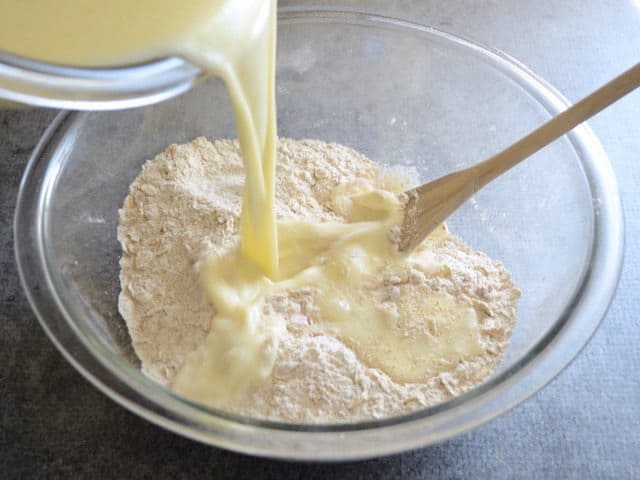 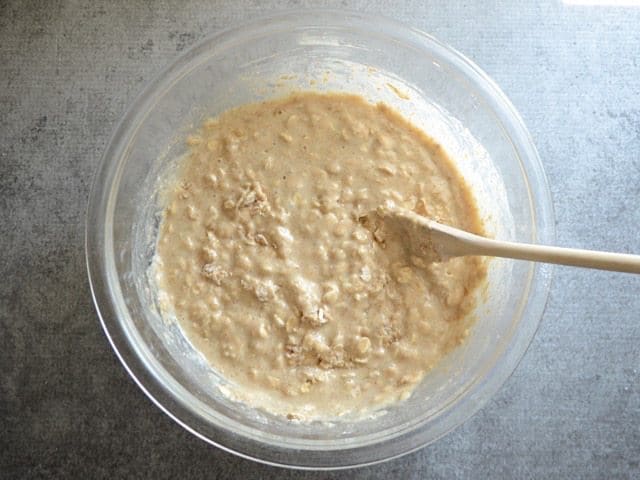 Stir the two together JUST until they’re combined. It’s really important not to over mix here, so it’s okay if it’s lumpy and there are a couple dry spots left. You’ll stir just a bit more after adding the berries. 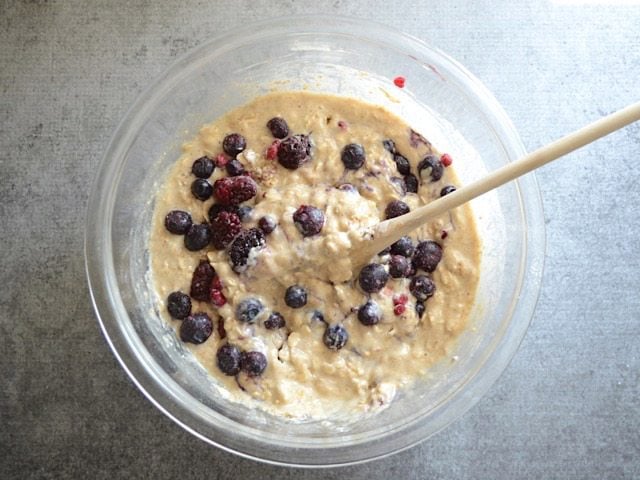 Add one cup frozen berries and gently fold them into the batter. Don’t stir too much because they’ll turn the batter blue. Also, keeping them frozen until you stir them in helps prevent the juice from spreading and turning the batter blue. 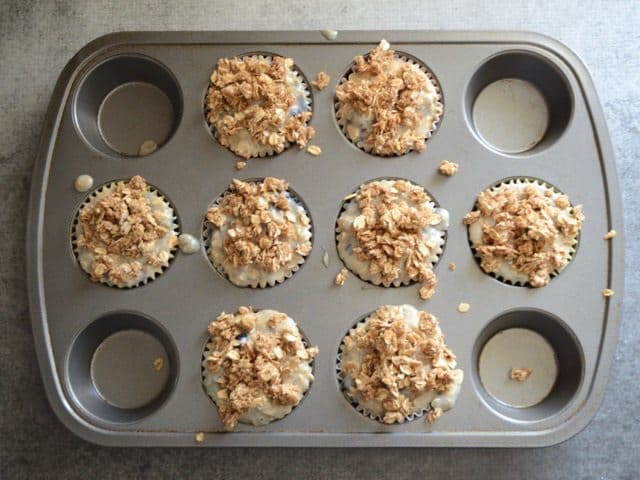 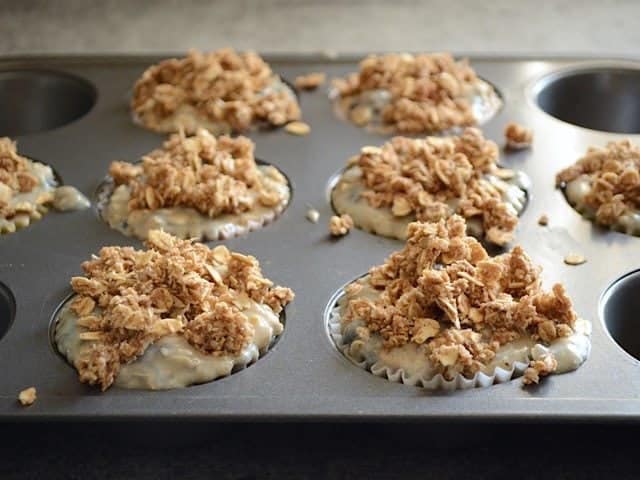 Here’s the side view for reference, so you can see how full they are. Transfer the muffin tin to the oven, turn the heat down to 400, then let them bake for 22-25 minutes. 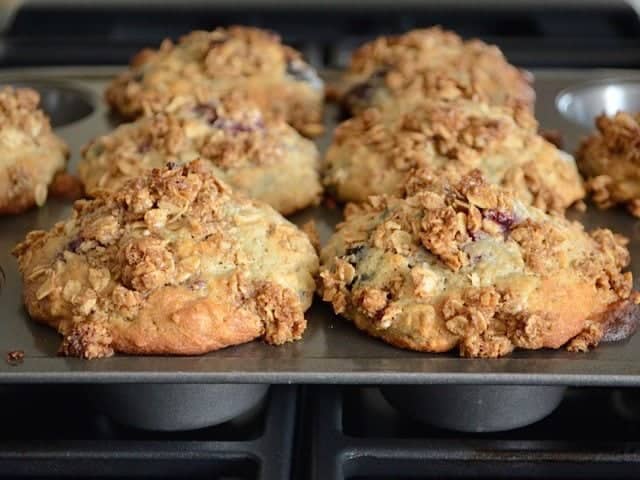 Or until they’ve risen into nice rounded muffins, the tops have just a couple cracks, and they’re deeply golden brown. YUM. Remove them from the muffin tin to let them cool. It helps to use a knife to gently loosen the muffins where they’ve spilled over top. 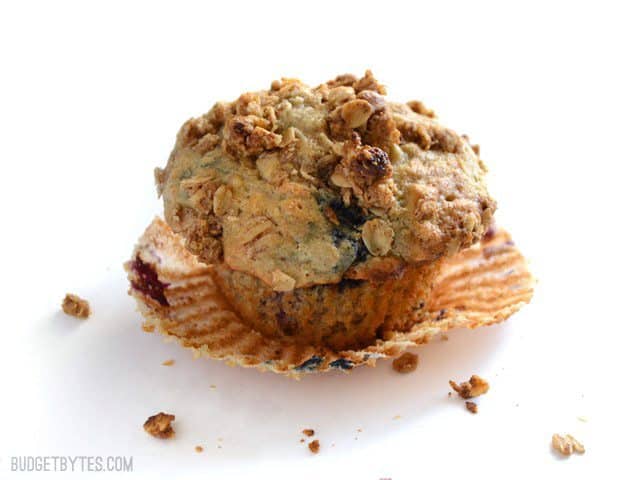 And then once they’re coooool, peel and enjoy! 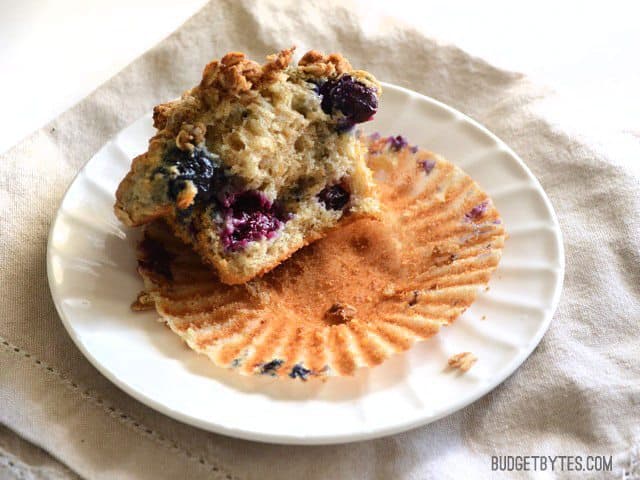 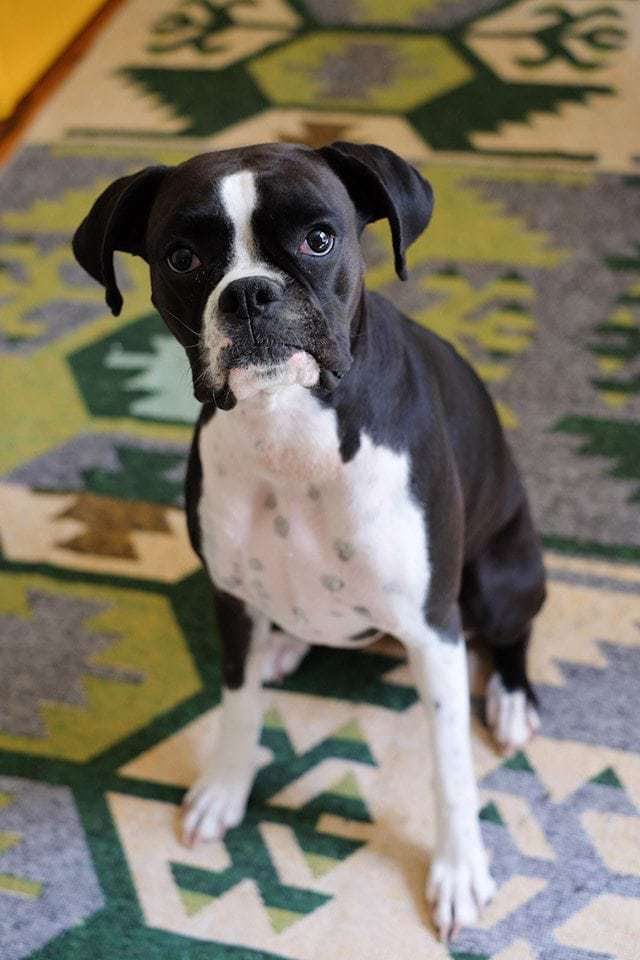 “You mean you didn’t bake those muffins for me?” 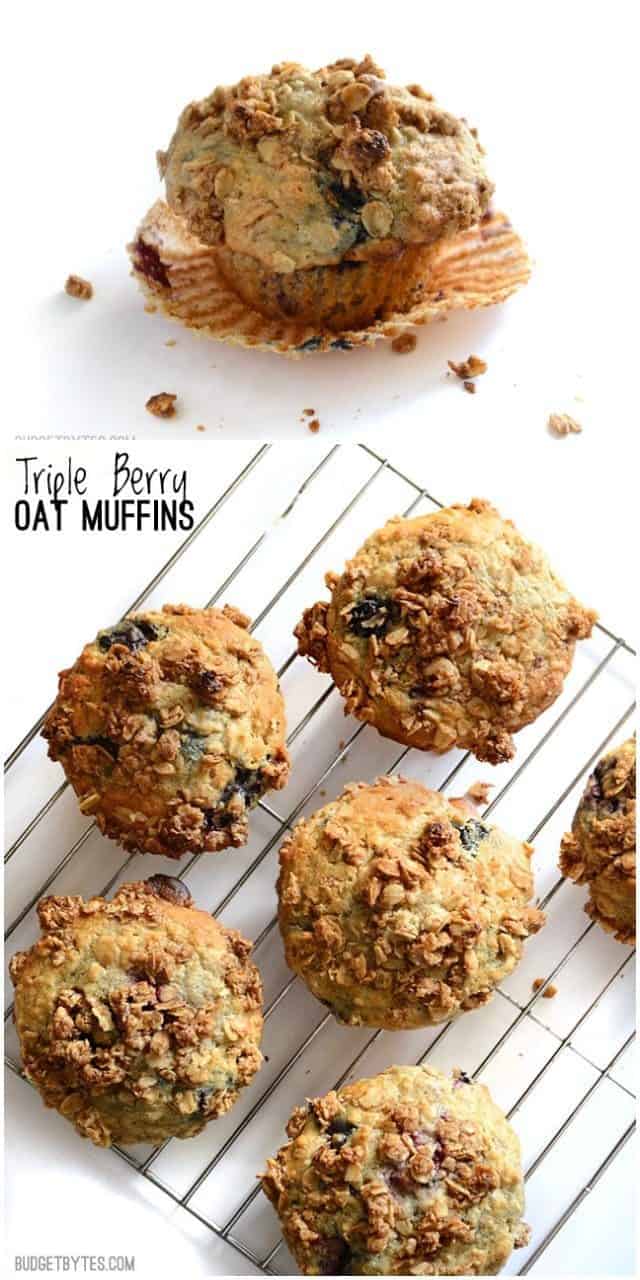