I was taking stock of my fridge the other day and noticed a half jar of pesto that I bought a couple weeks ago at Aldi. I didn’t want that pesto to go to waste, so today I whipped up these fun Pesto Pizza Rolls. They are a great appetizer or fun alternative to regular pizza if you want to change things up. You can eat them as-is or dip them into pizza sauce. Either way they’re super flavorful and have a wonderfully crispy cheese edge, similar to a deep dish pizza.

Make your own Thick & Rich Pizza Sauce to go on the side! 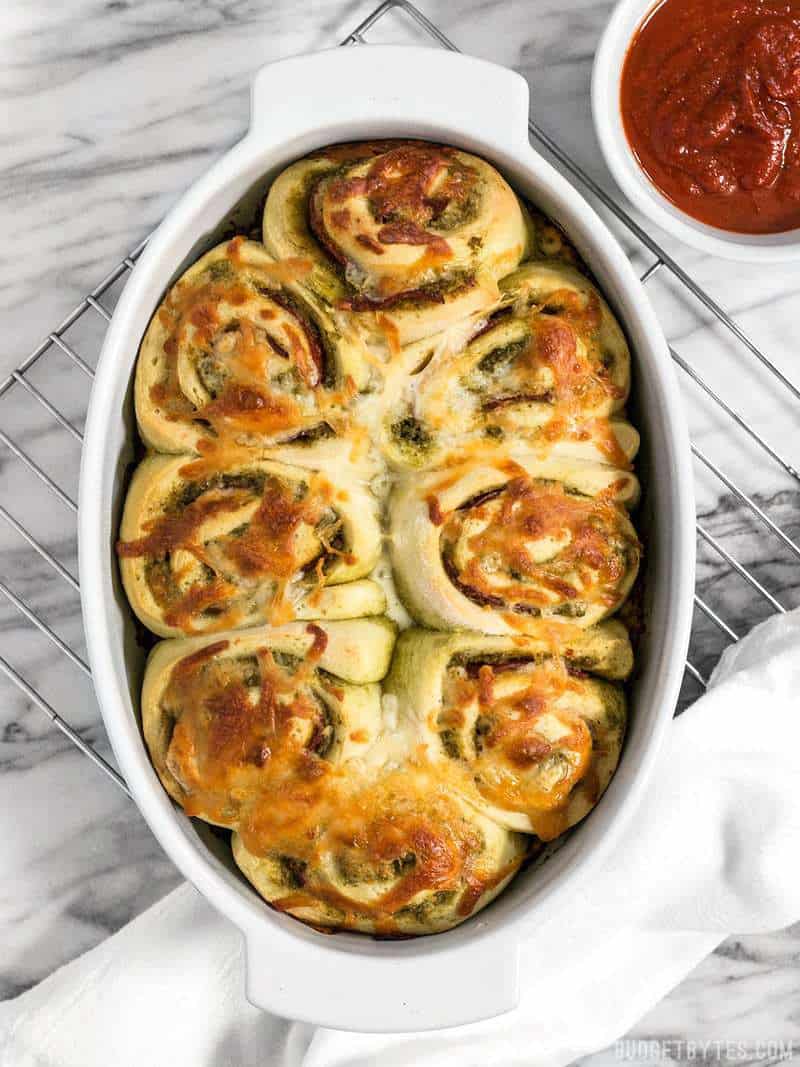 Choose the Flavor of Your Pizza Rolls

I made my Pesto Pizza Rolls with pepperoni and mozzarella, but the sky really is the limit for fillings on these guys. You can do regular pizza sauce instead of pesto and you could do something like olives instead of pepperoni if you want to go meatless. Just stay away from really watery vegetables like tomatoes.

I made a simple homemade pizza dough for my Pesto Pizza Rolls, but if you don’t have the time, patience, or confidence to do it yourself you can always grab a ball of raw pizza dough at the store or your local pizza shop. Once the dough is ready to go this recipe is super fast!

4.89 from 18 votes
These Pesto Pizza Rolls are a fun way to change up your pizza routine with swirls of cheese, pesto, and pepperoni, plus lots of crispy edges! 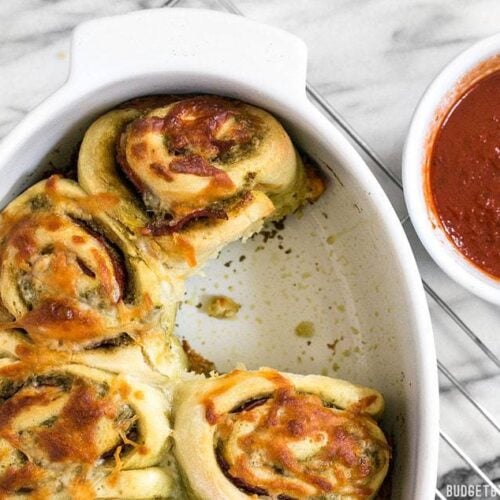 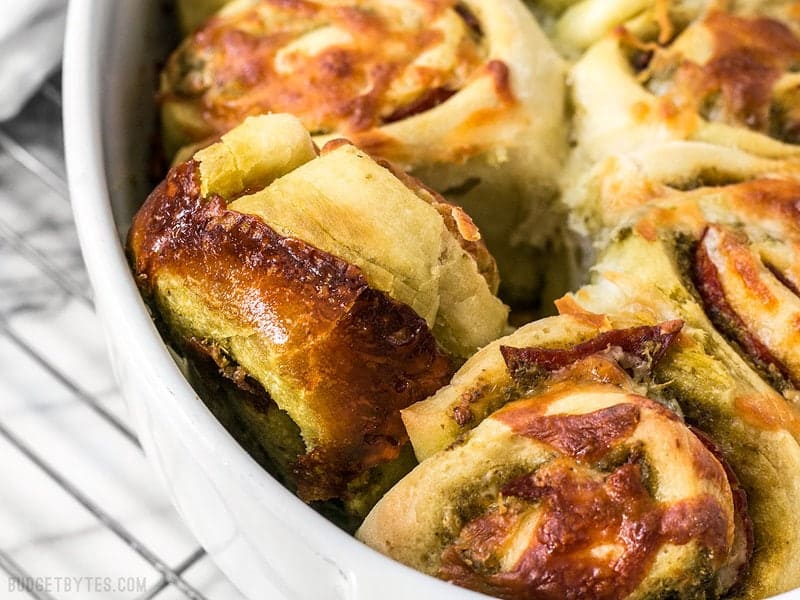 Look at those crispy edges!! 😍 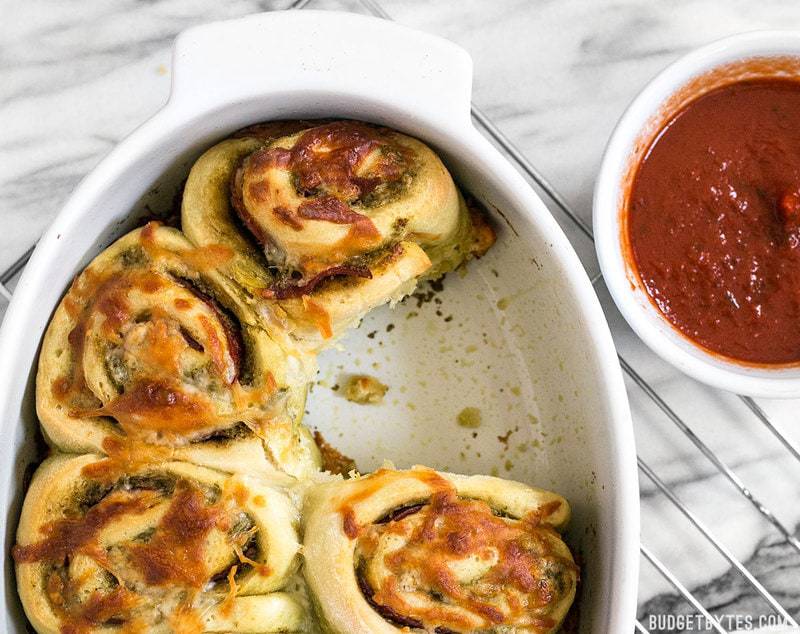 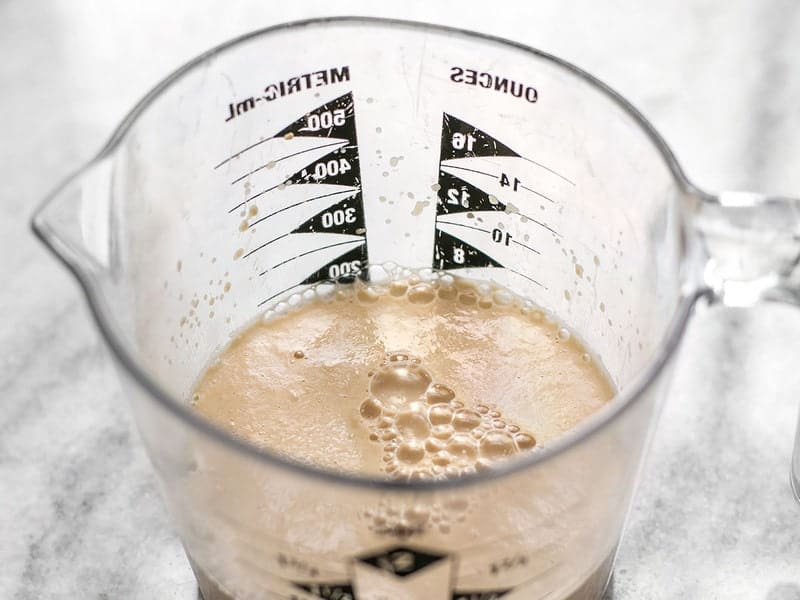 Begin by stirring together 3/4 cup warm water with 2 tsp yeast (active dry or instant) and 1/2 Tbsp sugar. Let the mixture sit for about five minutes, or until the yeast creates a layer of foam on top of the water. 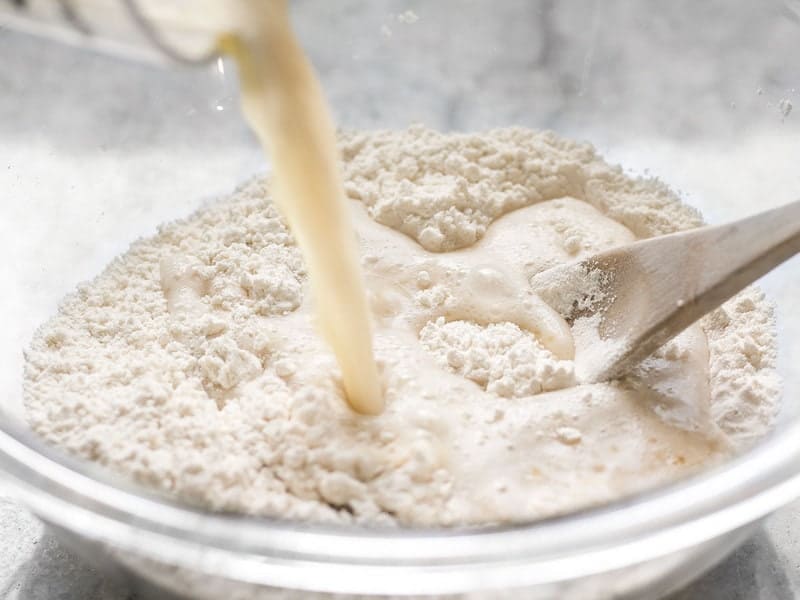 While waiting for the yeast to activate, combine 1 cup of flour and 1 tsp salt in a large bowl. When the yeast is ready, add 1Tbsp olive oil to the yeast water, then pour the whole thing into the bowl with the flour and salt. Stir until a gooey batter forms. 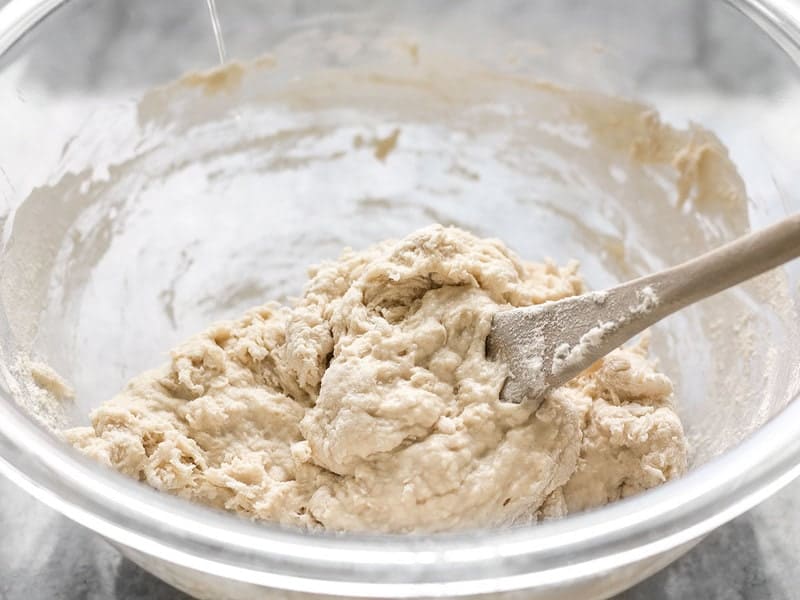 Begin stirring in more flour until a shaggy ball of dough forms that you can no longer stir with a spoon. At that point, turn the dough out onto a clean surface that has been sprinkled with more flour. 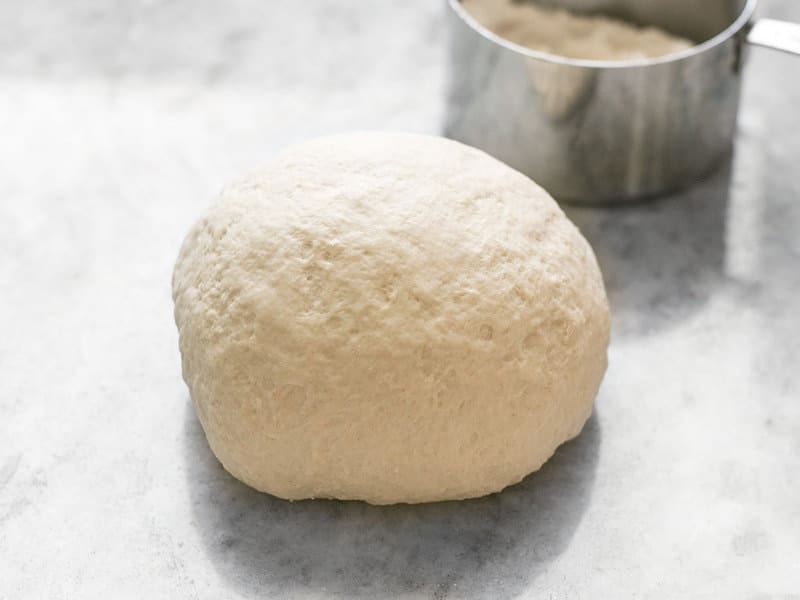 Knead the dough for five minutes, adding a small amount of flour as you go to keep it from sticking. Once kneaded, you should have used about 2 cups flour total (from the beginning, not since starting to knead). Place the ball of dough back in the bowl, cover it loosely, and let it rise until double in volume. 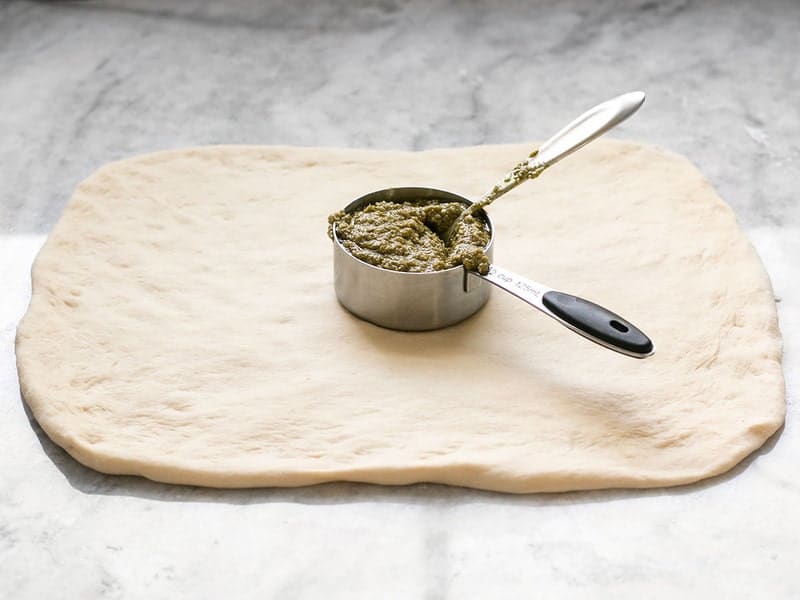 When the dough has doubled in size, begin preheating the oven to 400ºF. Punch the dough down, then turn it out onto a floured surface. Stretch and press the dough into a rough rectangle, about 10×16 inches. Try to avoid using a rolling pin if you can because this compresses the dough and it won’t puff up as nicely.

Spread about 1/2 cup pesto over the dough, edge to edge. 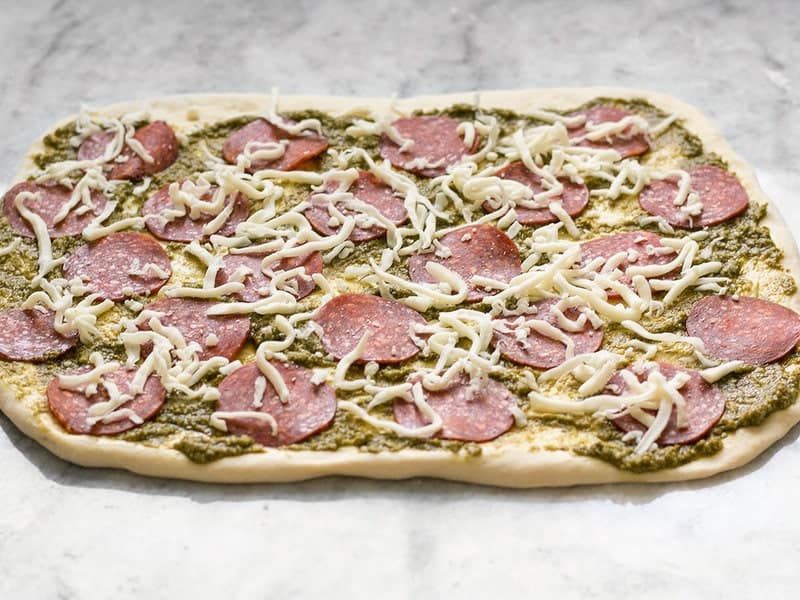 Add 2 oz. sliced pepperoni and 1/2 cup shredded mozzarella. Yep, that’s right, just 1/2 cup. You don’t need a lot of cheese and there will be more going on top. 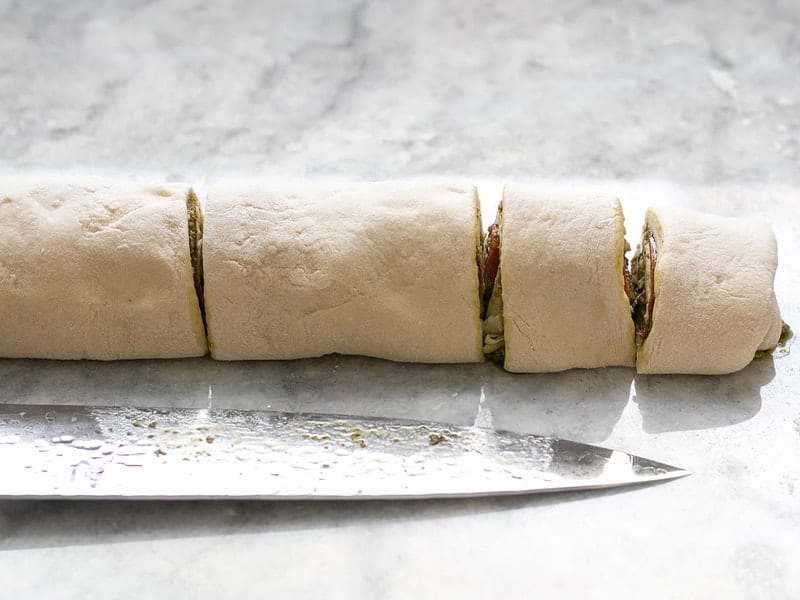 Roll the dough up like a log, then use a very sharp knife to slice it into 8 equal sized pieces. I like to first slice it in half, then each half in half, and then each piece in half one more time. It’s easier to get them even that way than starting at one end and just start slicing. 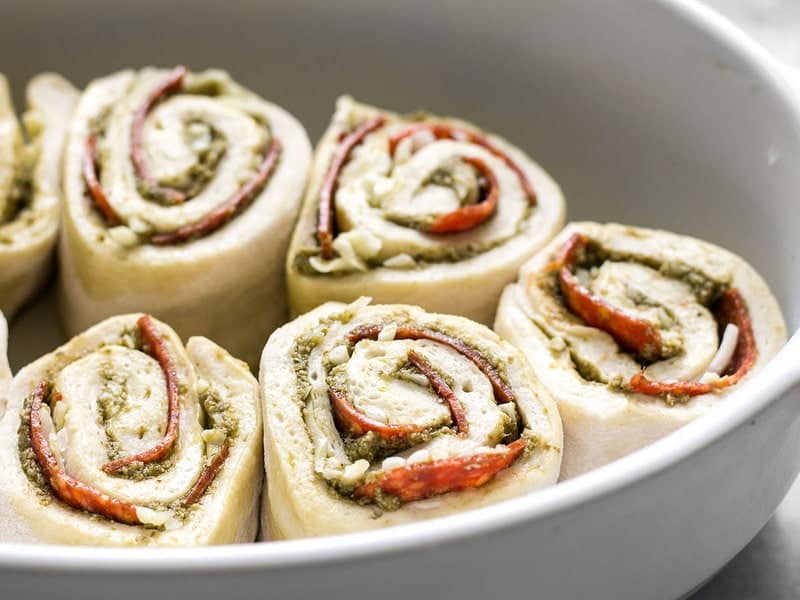 Place the sliced Pesto Pizza Rolls in a casserole dish coated with non-stick spray. Make sure you use a dish that gives them a little room to expand. 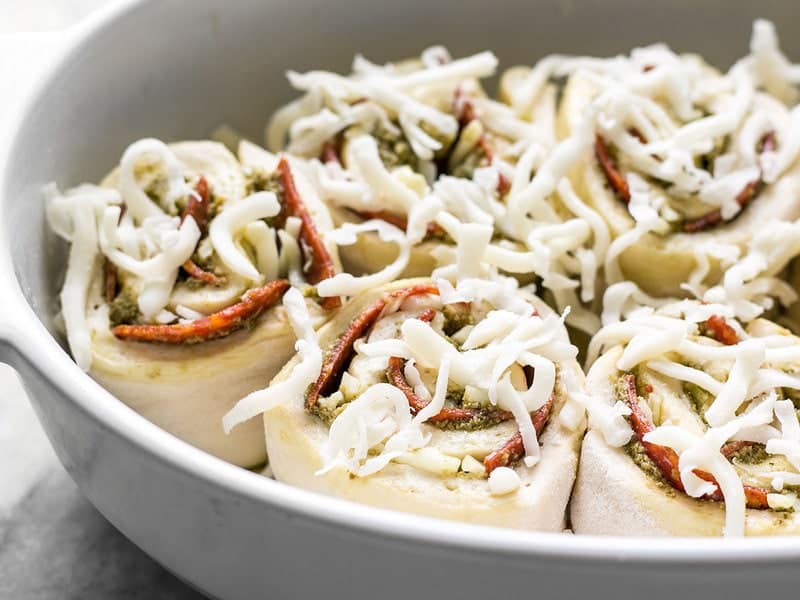 Add the last 1/2 cup shredded mozzarella on top of the Pesto Pizza Rolls, allowing some to fall around the edges and between the rolls. That’s what will create those nice crispy edges! 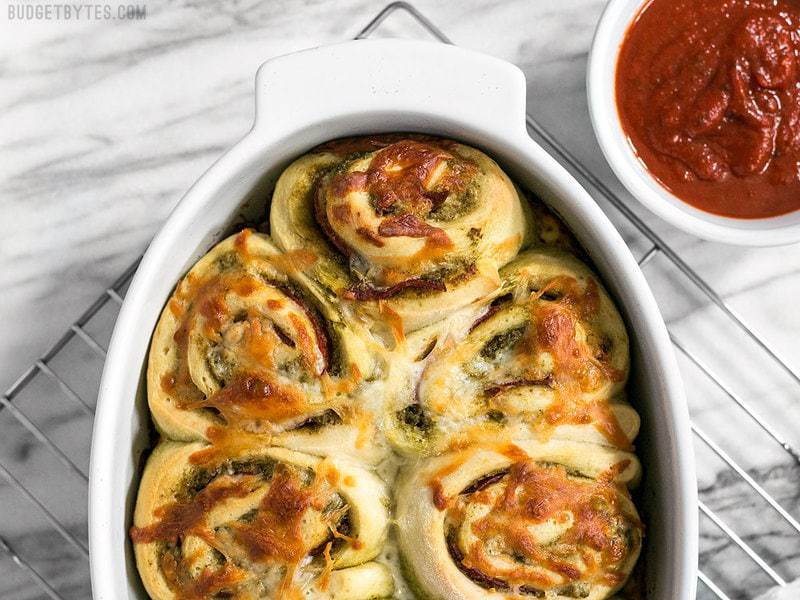 Bake the Pesto Pizza Rolls for about 30 minutes, or until they are puffed up, golden brown, and the cheese and pesto are bubbling around the edges! 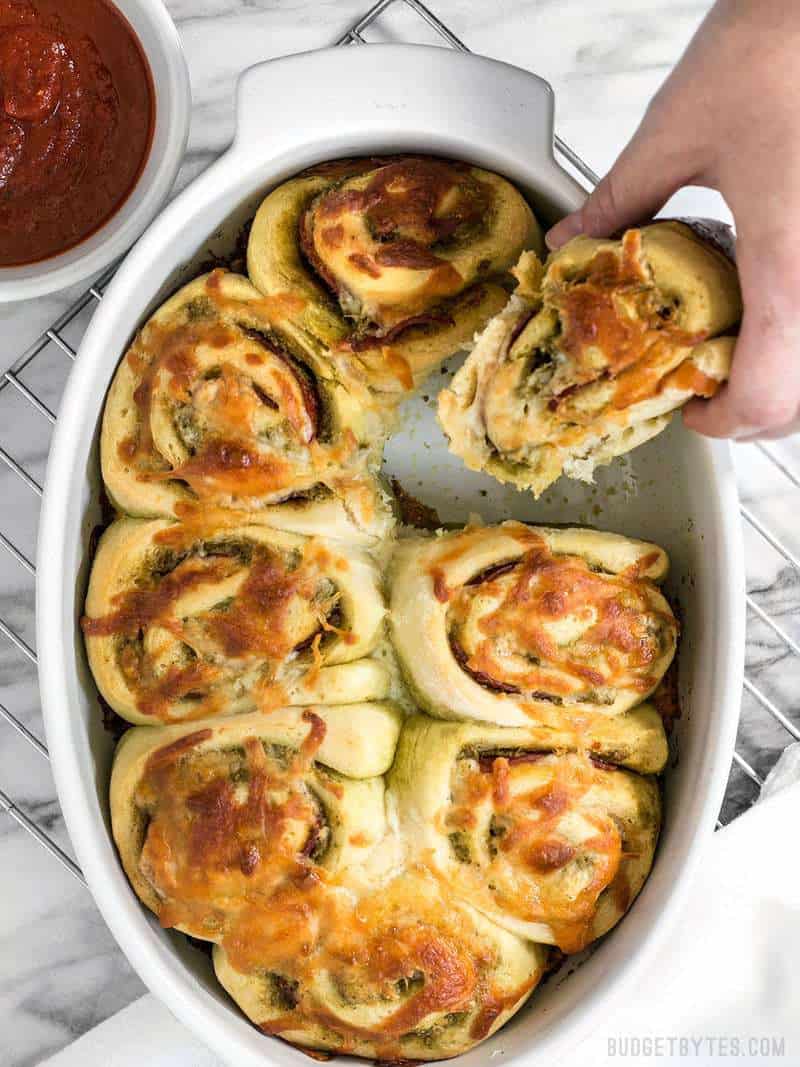 Excuse me while I sneak one of these… thx. ;)