I’ve been a little under the weather this weekend, so you know what that means?

Fast and easy comfort food… Because I’d really like to crawl back under my blanket and get back to my “sick day” activities (you know, watching too many Law & Order reruns and browsing OKCupid).

This recipe is another mock Hamburger Helper meal that I was able to whip up with things that I pretty much already had on hand in my pantry. It’s hearty, has tons of flavor, and cooks all in one pot. Winner!

I used 3/4 lb. ground beef because that’s what I had stashed in my freezer, but you could easily do 1/2 lb. or a whole pound without changing anything else in the recipe. I threw in some black olives because I was in the mood, but skipping them would cut about a dollar off the total cost of the recipe. A little sour cream on top would  be awesome and if I had some shredded lettuce on hand, I would have sprinkled it on top of the pasta for extra crunch. MMmm. Anyway, those are a few more options for you!

P.S. This will freeze great. 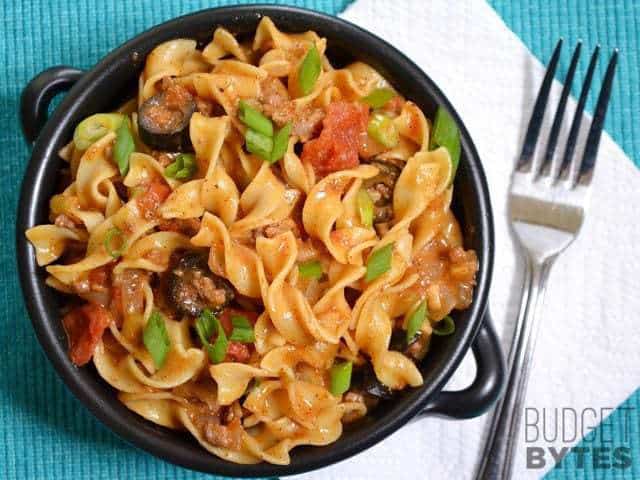 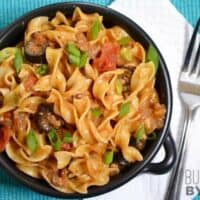 *I use Better Than Bouillon soup base to make my broth rather than using canned or boxed broths. It is much less expensive.
*Instead of using separate cans of diced tomatoes and diced green chiles, you can use one can of Rotel or a similar diced tomato & green chile product.
*Instead of using individual spices, you can use one packet of taco seasoning.
See how we calculate recipe costs here.
Tried this recipe?Mention @budgetbytes or tag #budgetbytes on Instagram! 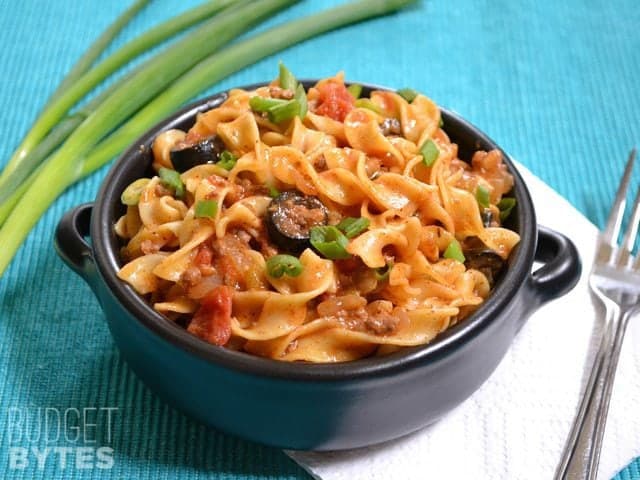 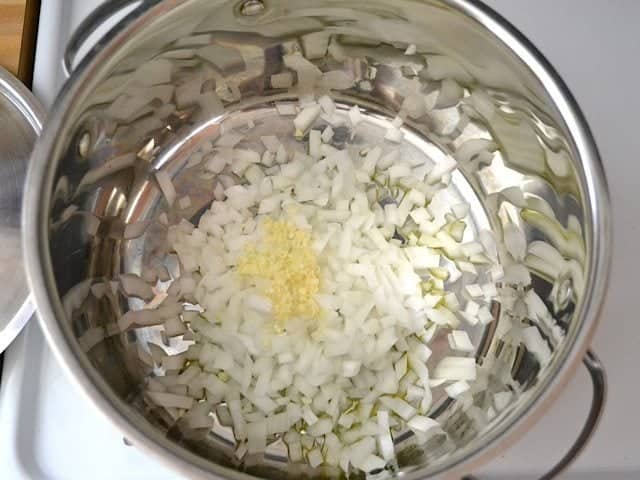 Dice the onion and mince the garlic. Add both to a large pot along with a little olive oil. Cook for a couple of minutes over medium heat, or until they begin to soften. 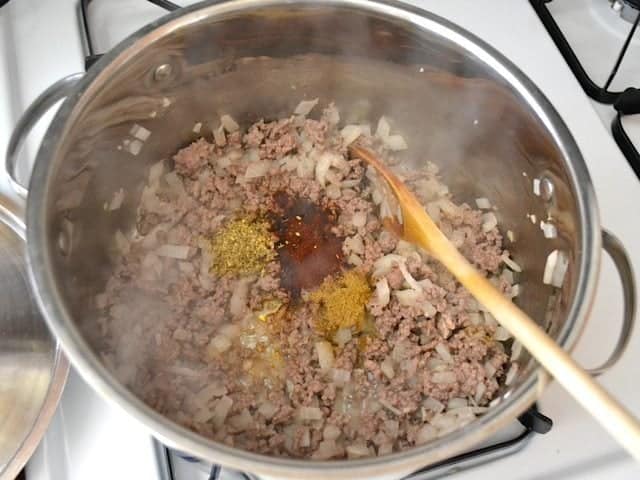 Add the ground beef and continue to cook until it is completely browned. Next add the chili powder, cumin, and oregano. You can use a packet of taco seasoning here instead, if you’d like. 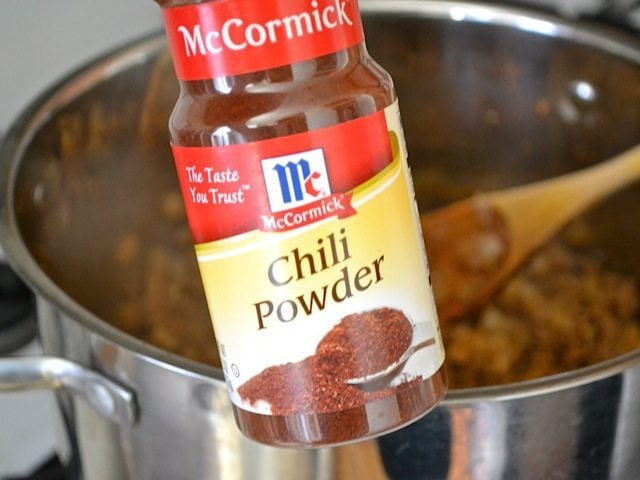 And when I say “chili powder” I mean this, NOT cayenne pepper, which is extremely spicy. This stuff is mild, but flavorful. I know it’s a bit tricky because they go by different names in different countries, so hopefully this will help. 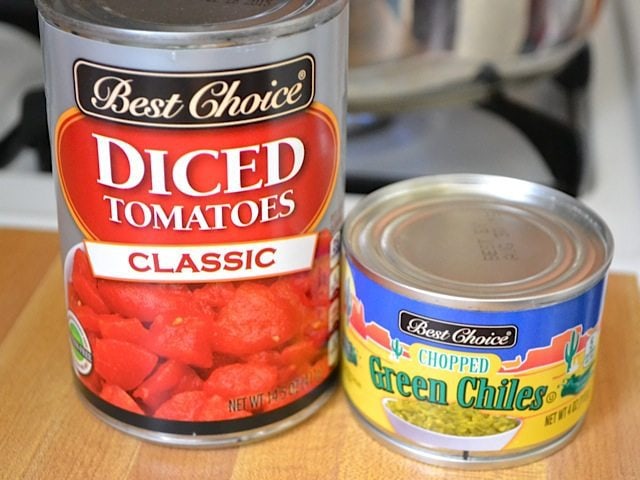 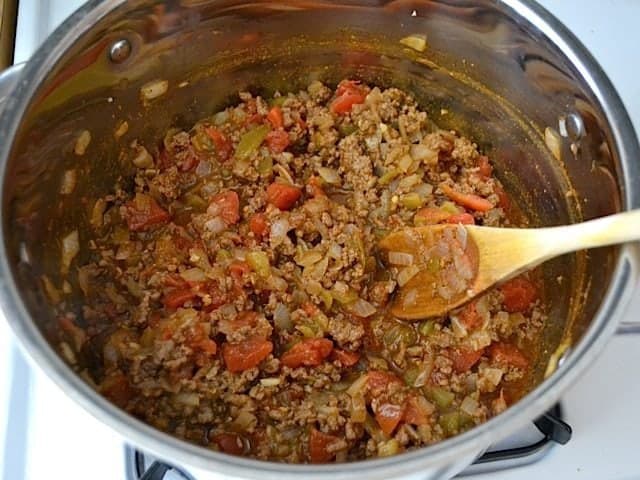 So now you have this – seasoned beef with tomatoes and green chiles. It may still taste a little mild because there is no salt, but the beef broth will take care of that. 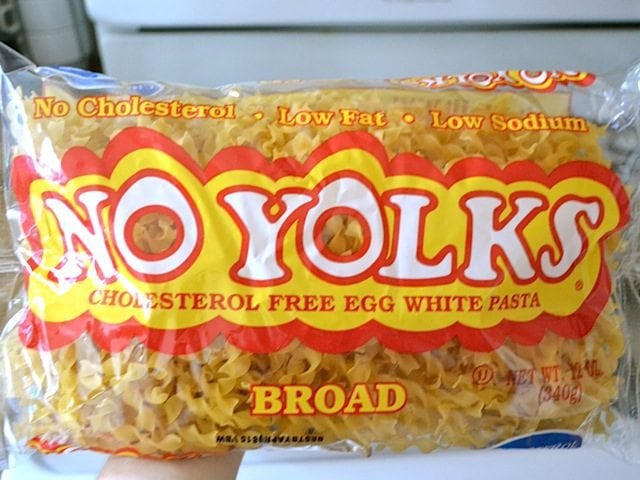 I used these noodles because I love their light texture. This bag is 12 oz. so I added approximately 2/3 of it, or about 8 oz. If you have a one pound sized package, use half of it. 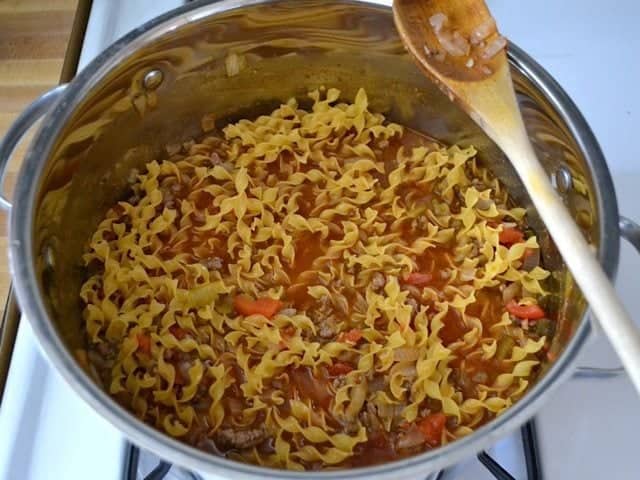 Add the dry pasta and the beef broth to the pot and stir everything together. As you can see, the noodles won’t be fully submerged, but that’s okay because the steam will cook them, plus you’ll stir once or twice while they cook. Put a lid on the pot and let it come up to a simmer. Then turn the heat down just a little (just above low) so that it is still simmering, and let it cook for about ten minutes. Stir once or twice during that time to ensure even cooking and to prevent the noodles from sticking to the bottom of the pot. 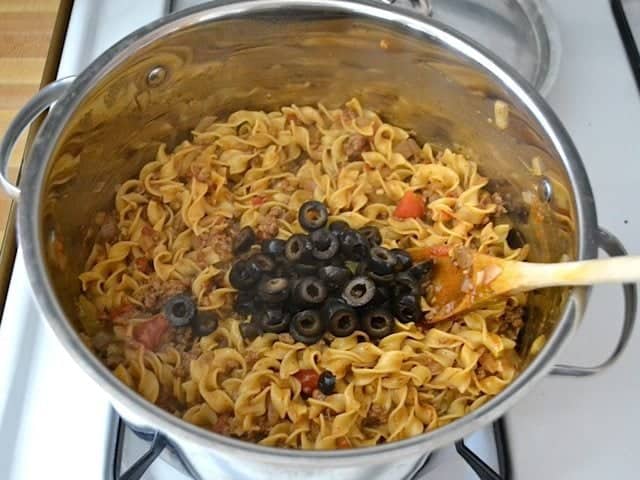 After ten minutes, the noodles should be fully cooked and most of the broth absorbed. If there is still some liquid hanging out on the bottom of the pot, just let it simmer for a minute or two more without the lid. Drain the black olives and add them to the pasta. I tasted it at this point and decided to add cayenne because my chiles were mild. 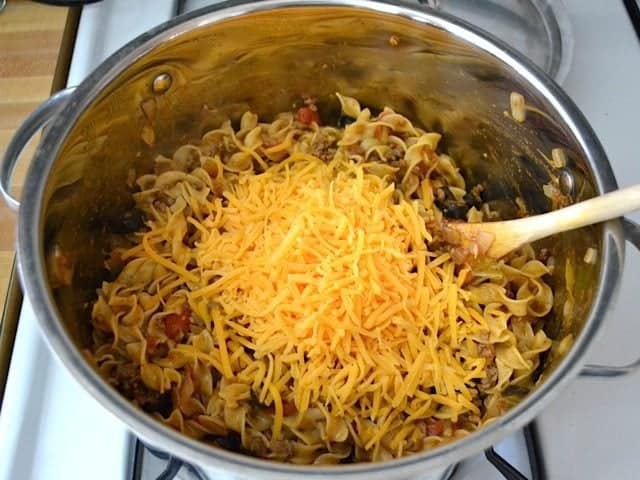 Add the cheddar cheese and stir it in. The cheese will melt in and make the “sauce” all nice and creamy. 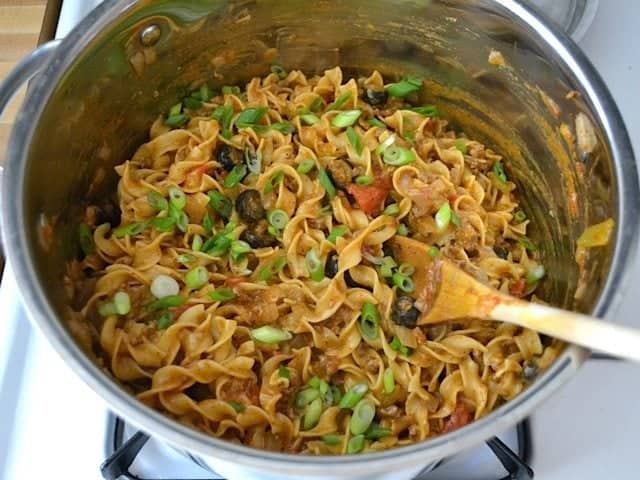 Slice the green onions and sprinkle them over top. THE END. 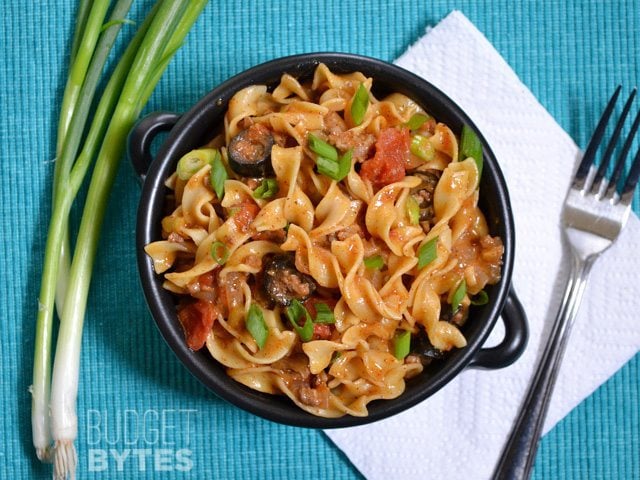 Hamburger Helper but with real ingredients.