A few weeks ago, my friend Jenni sent me a link to this amazing looking Bean and Bacon Soup by Taste and Tell. I had actually run across the photo on Pinterest a couple days prior and it had made my mouth water, but she had already tried it and verified it’s scrumptious status. That’s all I needed to make me want to try it ASAP. But of course, I made it my own and ended up with this Bacon Bean and Potato Soup.

Sooo finally, a few weeks later, here it is. I switched things up and put my own spin on it as usual, but the bones are the same. Simple ingredients and big flavor—my kind of recipe! I used dry beans to save an extra dollar or two, used less bacon, and added potatoes because A) they were on sale and B) potatoes are great for bulking up soups. Because of that, this soup makes a HUGE batch, so you can rest assured at least half of it is going in my freezer. Make sure you have a large stock pot for this one. Mine was a 5 quart pot and The Bacon Bean and Potato Soup filled it really close to the top!

I also made some No-Knead Ciabatta to dip into this thick delicious soup. I highly suggest you do the same. ;) 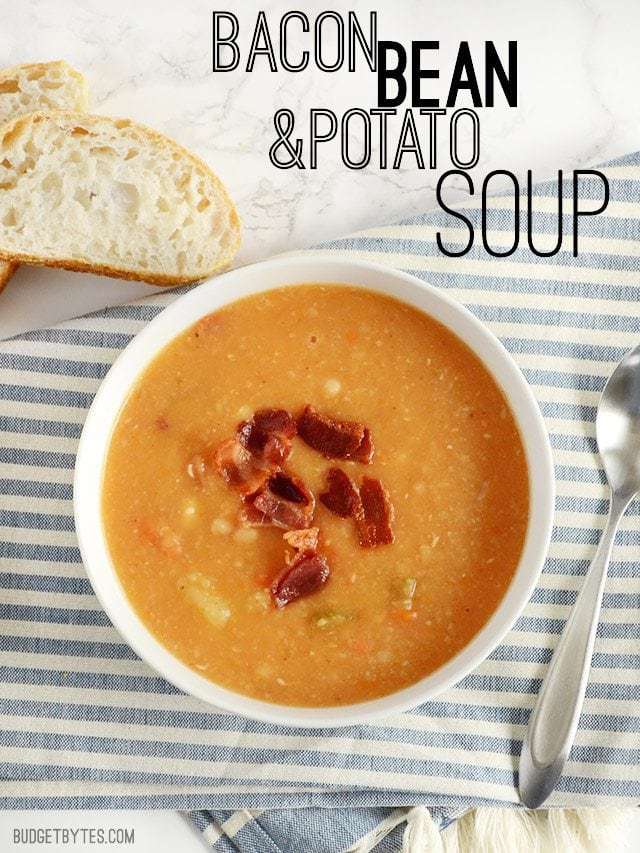 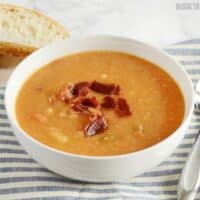 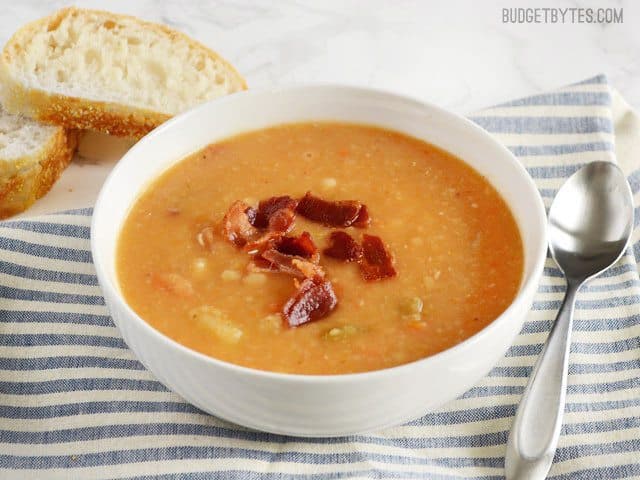 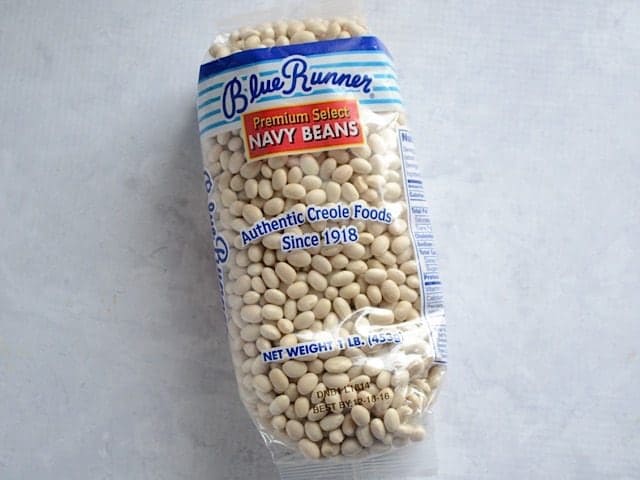 For this recipe you’ll need one pound of dry navy beans. Navy beans are small and break down pretty easily, which makes them nice for this soup where you’ll be blending them until thick and smooth anyway. 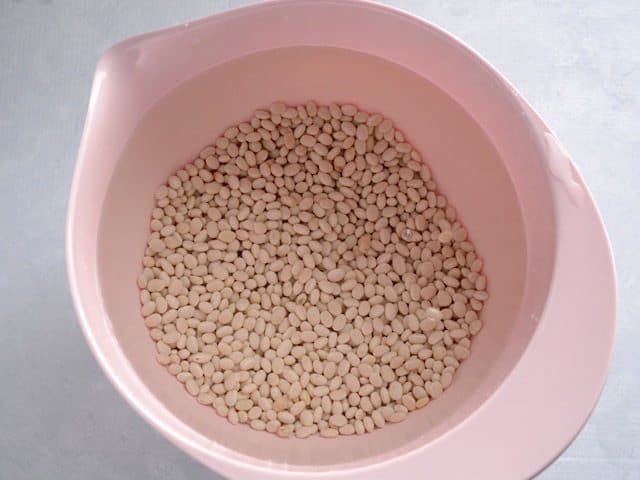 The evening before, place the beans in a large bowl and cover with a few inches of water. Let the beans soak in the refrigerator over night. 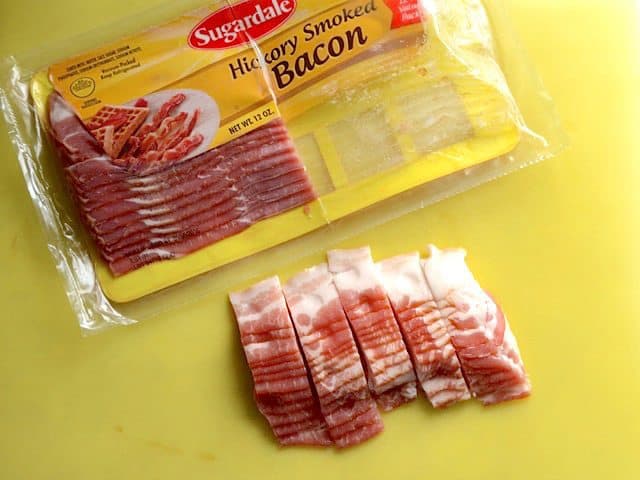 The next day, take 6oz. of bacon (1/2 of a 12oz. package) and slice them into one-inch strips. The rest of the bacon can be frozen for use in another dish (or eaten for breakfast later in the week). 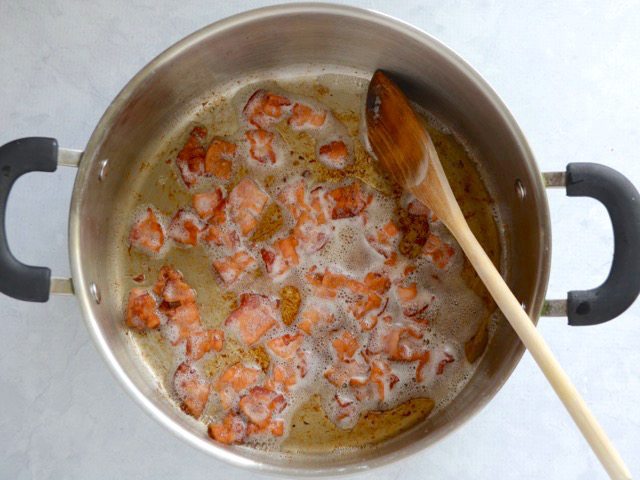 Cook the bacon over medium heat in a large pot until it’s brown and crispy. Remove the bacon to a paper towel covered plate and pour off most of the grease, leaving a tablespoon or two to cook the vegetables. 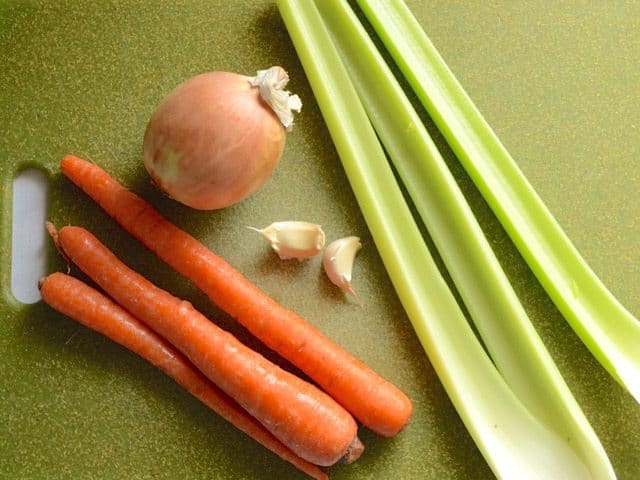 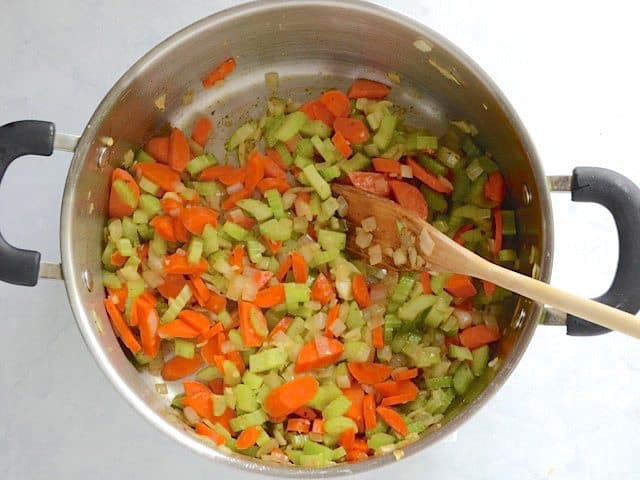 After the bacon is removed, dd the onion, garlic, carrots, and celery to the pot with the left over bacon grease. Sauté the vegetables over medium heat until the onions are soft and transparent (about five minutes). Use the moisture from the vegetables to help dissolve the browned bits of bacon off the bottom of the pot (that’s all the good flavor bits!). 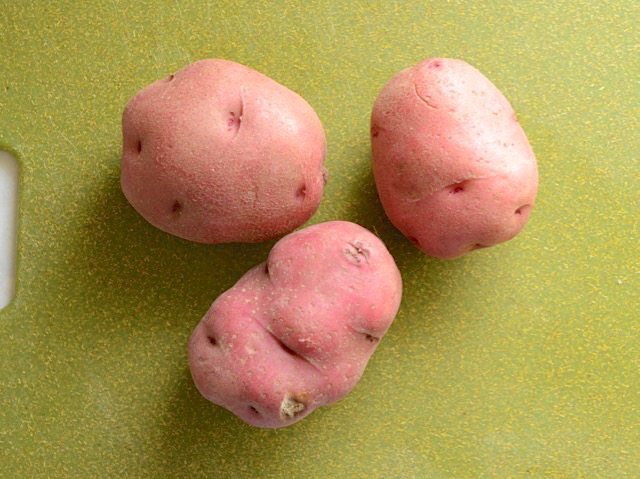 While the vegetables are sautéing, peel and cut about 1.5 to 2 lbs. of potatoes into 1/2-inch cubes. I had almost 2 lbs of potatoes, but could have used a bit less because my pot was REALLY full. I’d aim for 1.5 lbs. 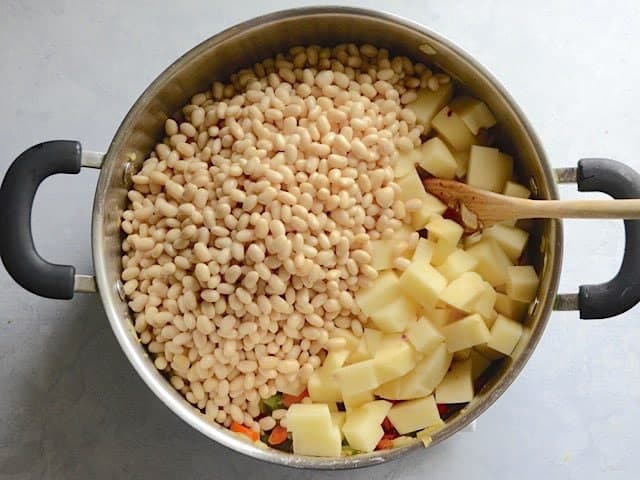 Drain the soaked beans in a colander and give them a quick rinse. Add the rinsed beans and cubed potatoes to the pot with the sautéed vegetables. 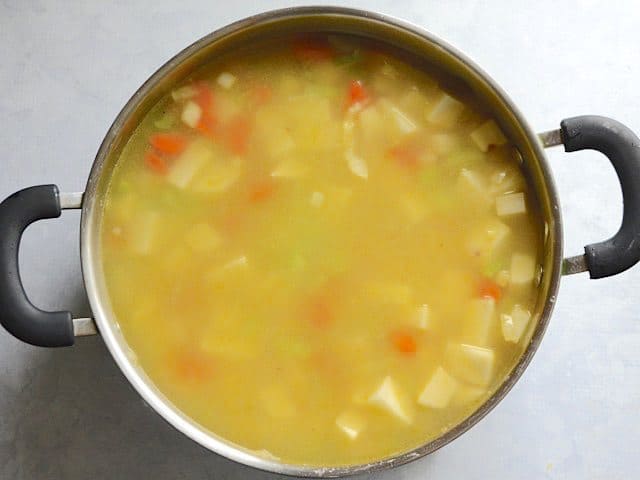 Add six cups of vegetable broth. Place a lid on the pot and let it come up to a boil. Reduce the heat just slightly and let the soup boil gently for about an hour, or until the beans and potatoes are very soft. 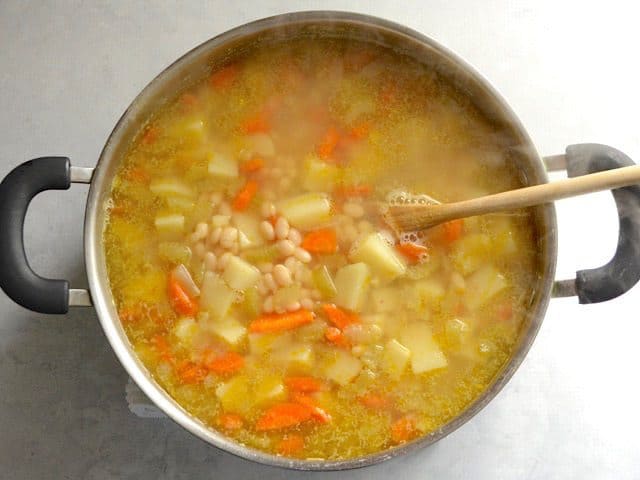 And then it will look a little something like the photo above.

Use an immersion blender to purée about half of the soup. You want a few whole beans and vegetables for visual texture and color. If you don’t have an immersion blender, remove about half of the soup and let it cool until warm, then use a blender or food processor to purée the soup. Stir the puréed soup back into the rest. BE SURE to let it cool before blending. Blending hot liquids is very dangerous. I speak from experience. 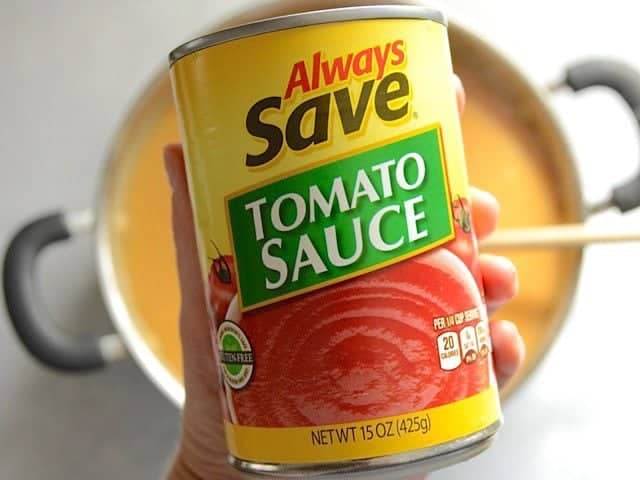 Add about 8 oz. of tomato sauce to the soup and stir to combine. I’ve had this 15 oz. can sitting in the back of my pantry for AGES, so I just used that, or half of it anyway. 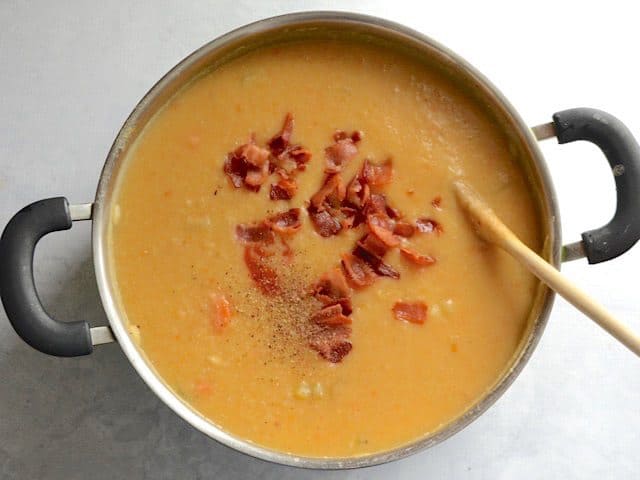 Finally, stir the crispy bacon back in the soup, let it heat up (if it’s not already), taste, and season with salt and pepper if needed. The amount of salt is very subjective, but potatoes tend to absorb a lot of salt, so I added about 1/2 tsp at the end. You can reserve a few pieces of bacon for garnishing the bowls, if desired. 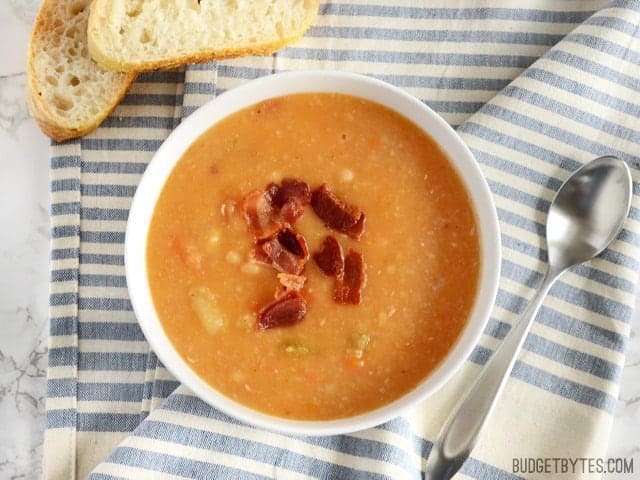 Thick, warm, and very filling! Bacon Bean and Potato Soup is the perfect soup for cold Autumn evenings. Make sure to get some crusty bread to dip in this deliciousness. 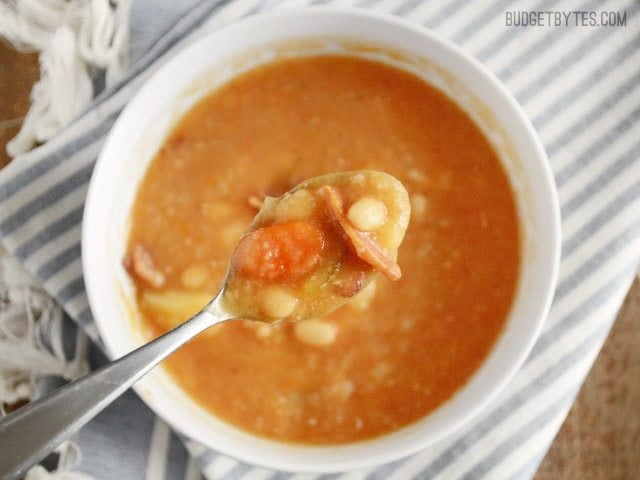 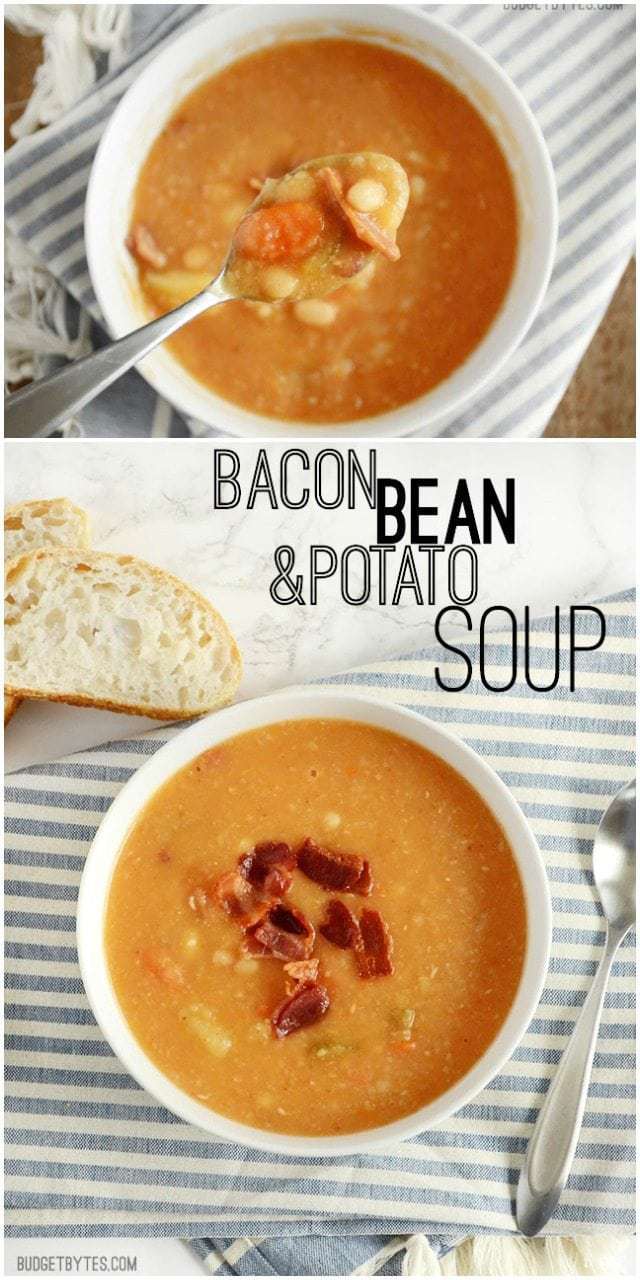