Alright, we’ve all been on our New Year’s diets for two weeks now, so it’s time for a little splurge, right? I mean, it’s all about balance. If you’re going to give yourself one splurge, you need it to be this Tomato Basil No Knead Bread! I’m serious. It’s divine. 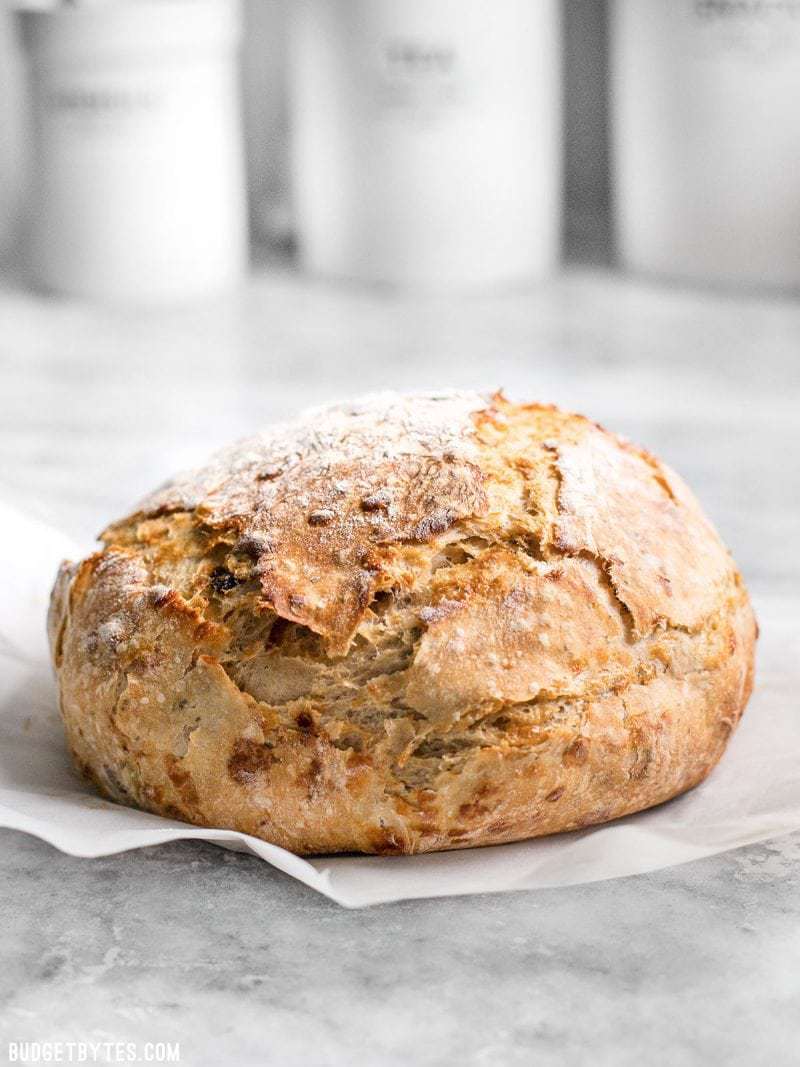 This bread has a wonderfully subtle tangy flavor thanks to a handful of sun dried tomatoes and a little tomato past dissolved into the water. It’s the perfect easy bread for serving with your hearty winter soups and stews. This recipe does make a rather large loaf, but if you don’t think you can eat it all up within a few days, I suggest slicing it in half (after it has completely cooled), popping half of it into a freezer bag, and storing it in your freezer until you need more bread. This bread freezes beautifully and thaws quickly at room temperature.

I decided to do a “quick” no knead bread this time, meaning it only rises for about 2 hours instead of 12-18. If you prefer to do a long dough ferment to get that really deep flavor, you can, just make sure that you reduce the amount of yeast in the bread to 1/4 tsp instead of 2 tsp. The reason the long ferment doughs use such little yeast is because as the dough sits out for 12-18 hours the yeast has time to reproduce and ends up with the same yeast power as if you had done a short rise with 2 tsp yeast.

For Best Results, Use a Dutch Oven

Using a Dutch oven produces the BEST results with this bread because it holds in steam as it bakes, which is what gives that crust it’s amazing crispy, crackle-y qualities. If you don’t have a Dutch oven it can be baked on a baking sheet, but it may expand more in an outward direction rather than up and the crust will have a slightly different texture. I am using a Lodge 5-quart Dutch Oven (affiliate link).

4.90 from 19 votes
This Tomato Basil No Knead Bread is the perfect partner for your winter soups and stews, and is half the cost of a store bought artisan loaf. 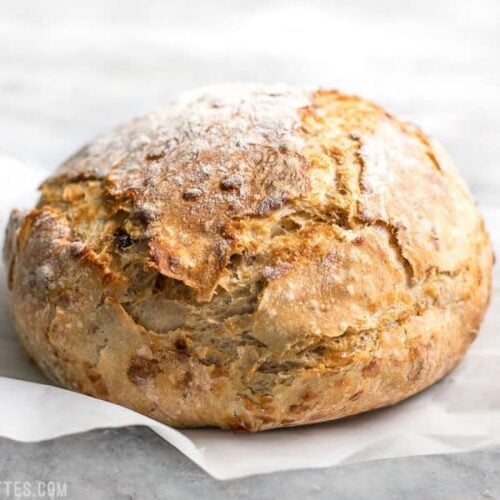 *I suggest using dry packed sun dried tomatoes for this recipe instead of oil packed tomatoes. 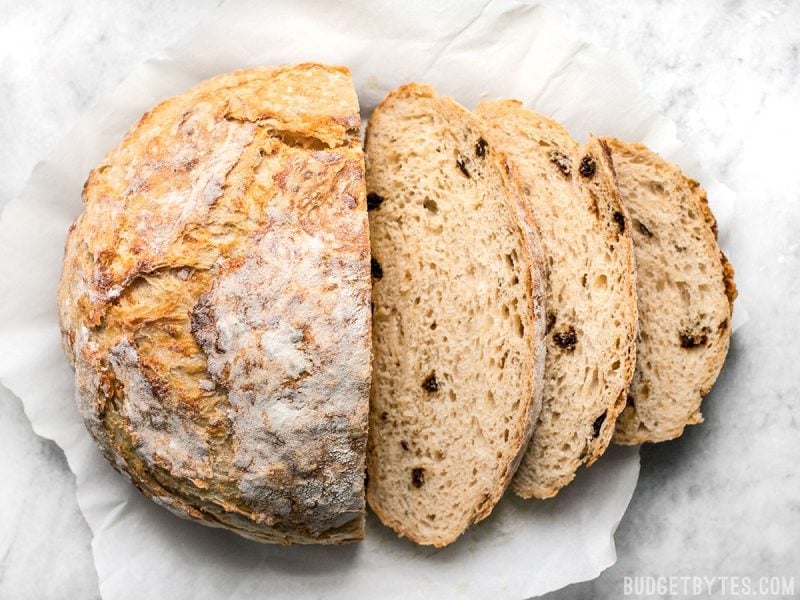 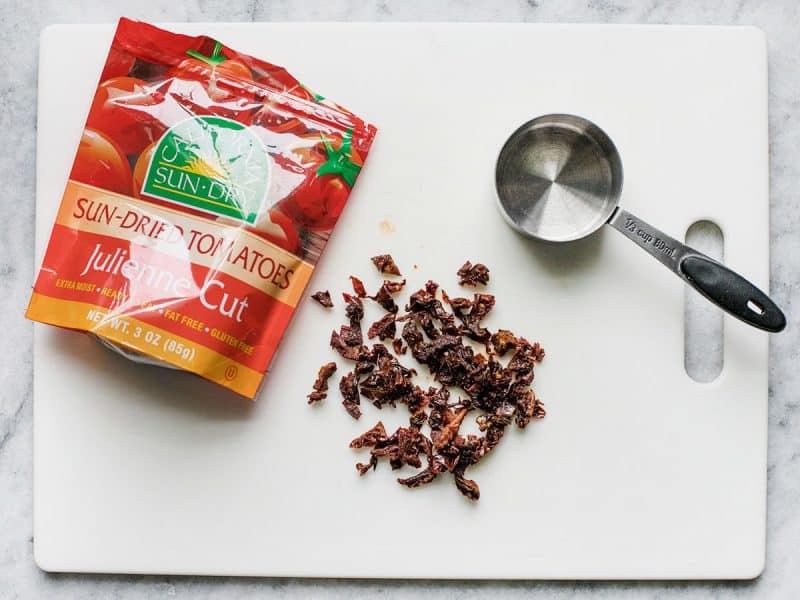 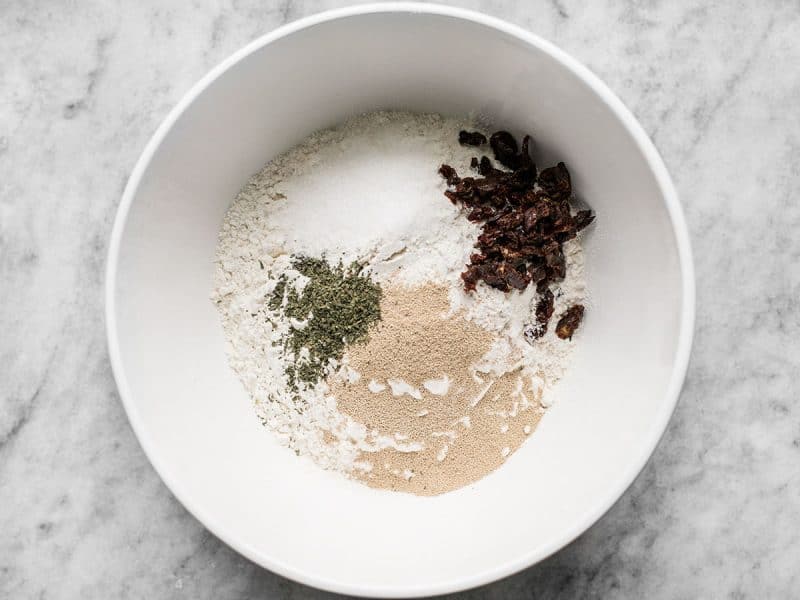 Add 3 cups all-purpose flour to a large bowl along with 2 tsp instant or bread machine yeast, 1/2 Tbsp salt, 1/2 Tbsp dried basil, and the chopped sun dried tomatoes. Stir until everything is evenly mixed. 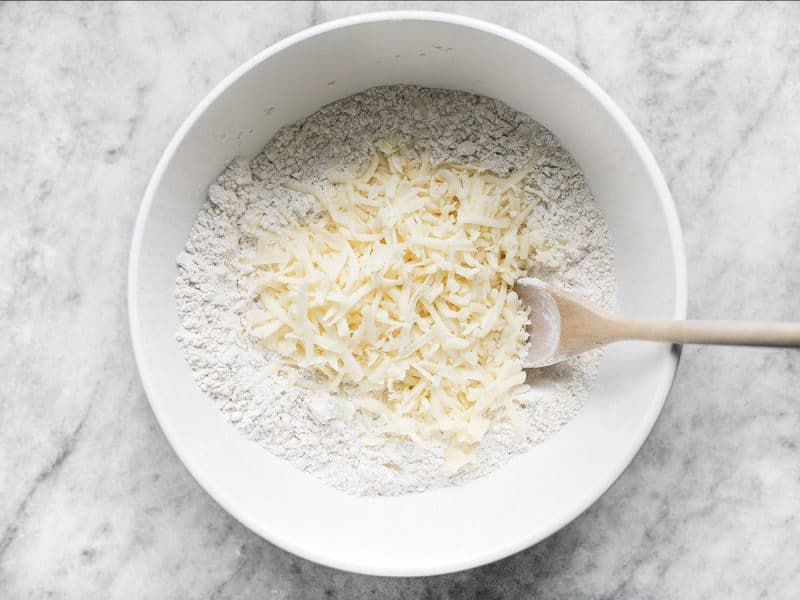 Stir in 4oz. mozzarella (shredded). The mozzarella is optional, and honestly it just kind of melted into the bread and I didn’t notice it much in the final product. 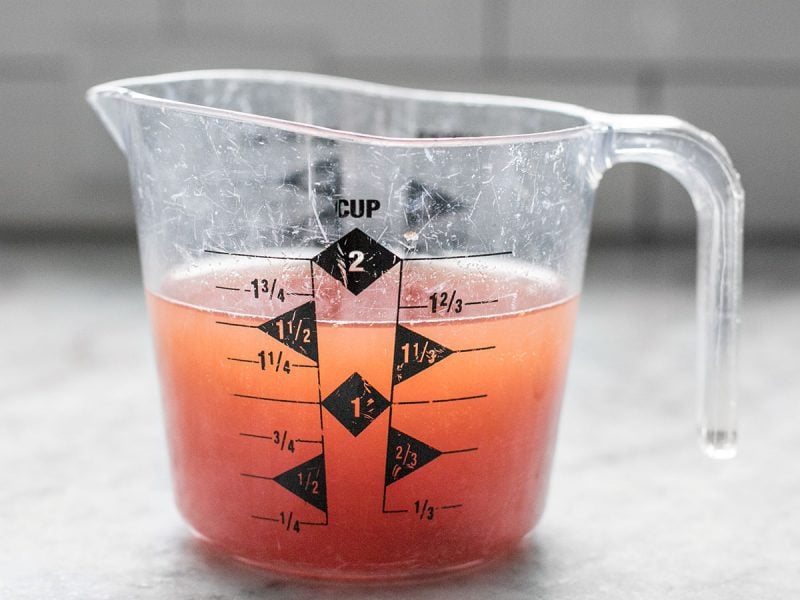 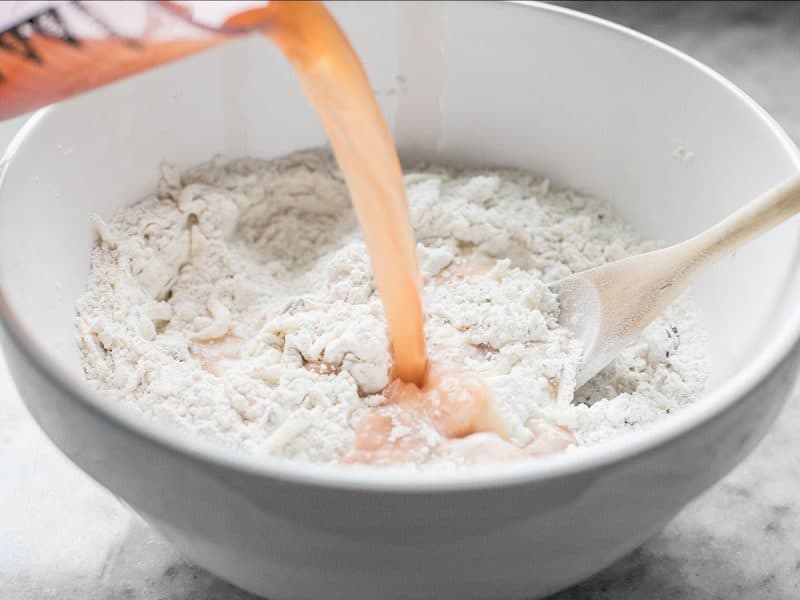 Pour the tomato water into the flour mixture. Because of slight differences in moisture content of flour or variations in measuring, you may need to use slightly more or less water each time, so I suggest going by the texture of the dough and not an exact measurement here. See the next photo for details on what you want the dough to look/feel like. 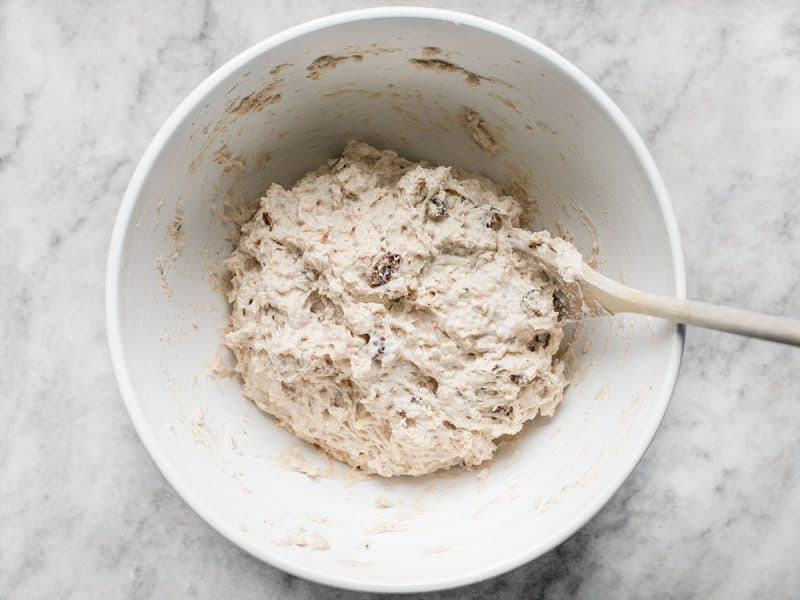 You want the dough to be fairly wet, sticky, and shaggy. It shouldn’t be so wet that it is glossy or slimy, but definitely too wet to handle with your hands. Also, it shouldn’t be so dry that there is dry flour left on the bottom of the bowl or on the surface of the dough. Cover the bowl loosely and let it rise for one hour, or until it’s double in size. 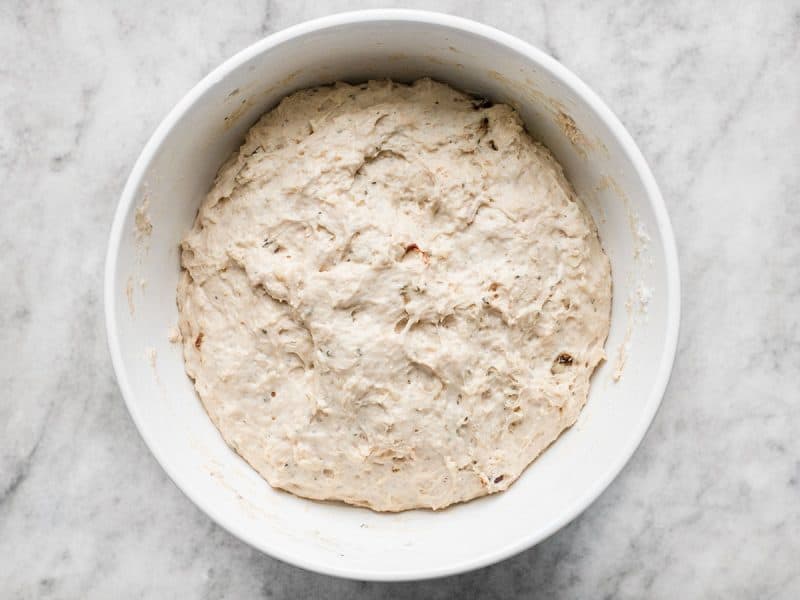 After it has risen for about an hour the flour will have soaked up some of that water so it won’t be quite as sticky (although still more sticky than a traditional kneaded bread dough). Sprinkle some flour on top of the dough and scrape it away from the sides of the bowl with your hand. 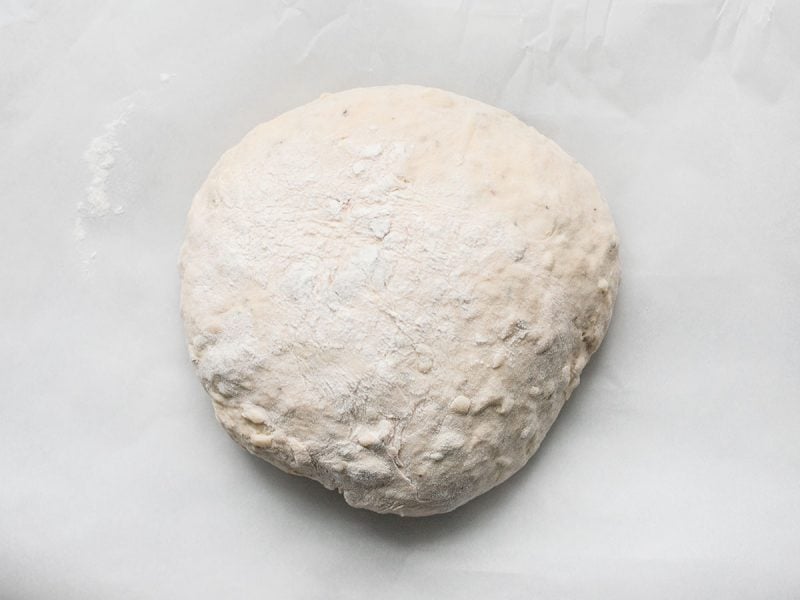 Turn the dough out onto a well floured surface and fold it over on itself 5-6 times, or just until it feels smooth. It should still be a very loose dough. Place the ball of dough on a piece of parchment paper and let it rise for another 30 minutes. Because the dough is so loose, it will rise more out than up, and that’s okay. 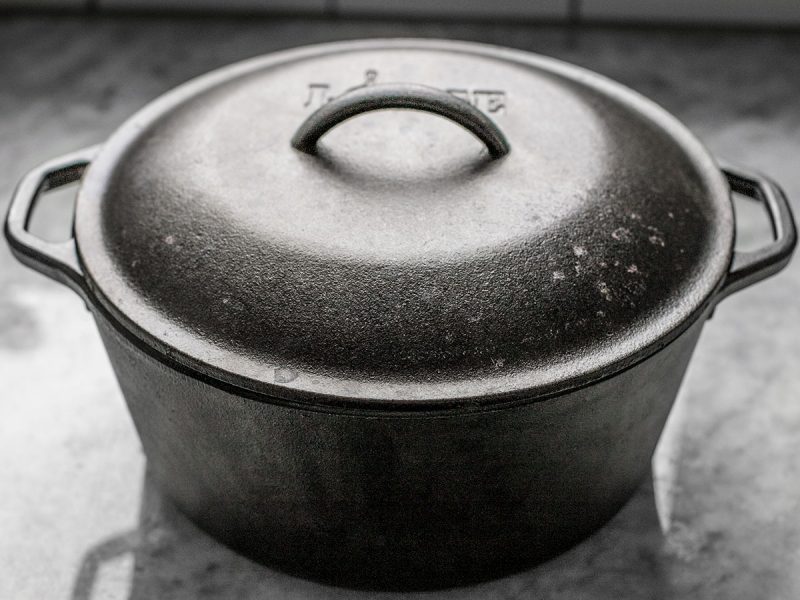 While the dough is rising, place your Dutch oven in the oven and begin to preheat it to 425ºF. Using a Dutch oven for this bread really makes a big difference in the texture of the crust and helps the dough be more of a dome shape, but if you don’t have one you can still cook the bread on a baking sheet. 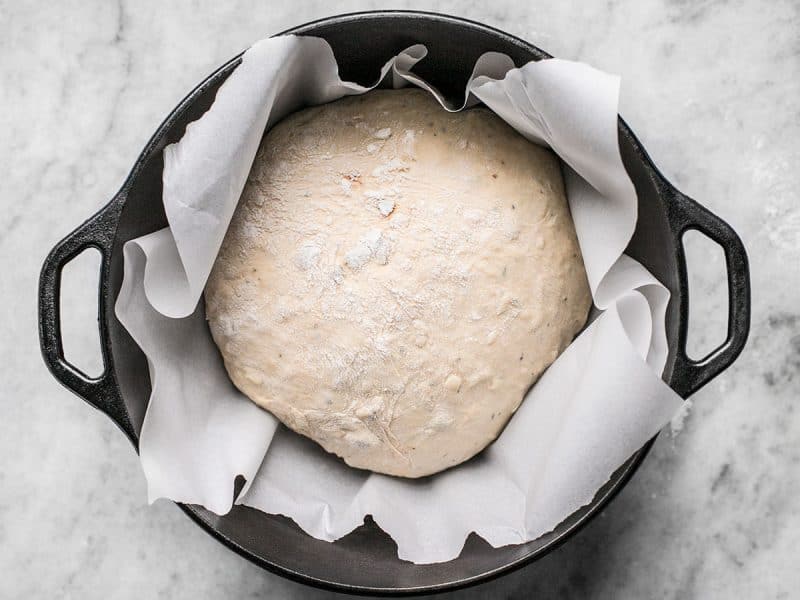 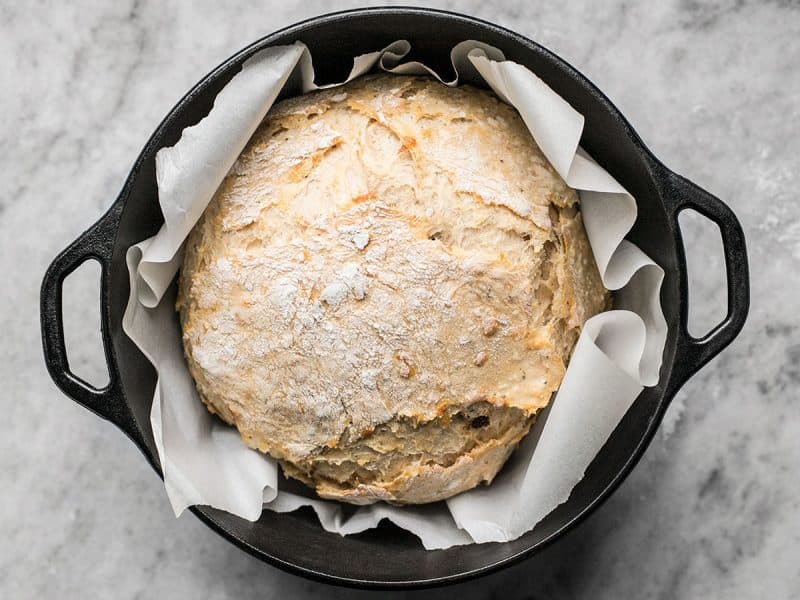 After 30 minutes of baking with the lid, it will look like this. Now remove the lid, return it to the oven, and bake for another 15-20 minutes to let the crust fully brown… 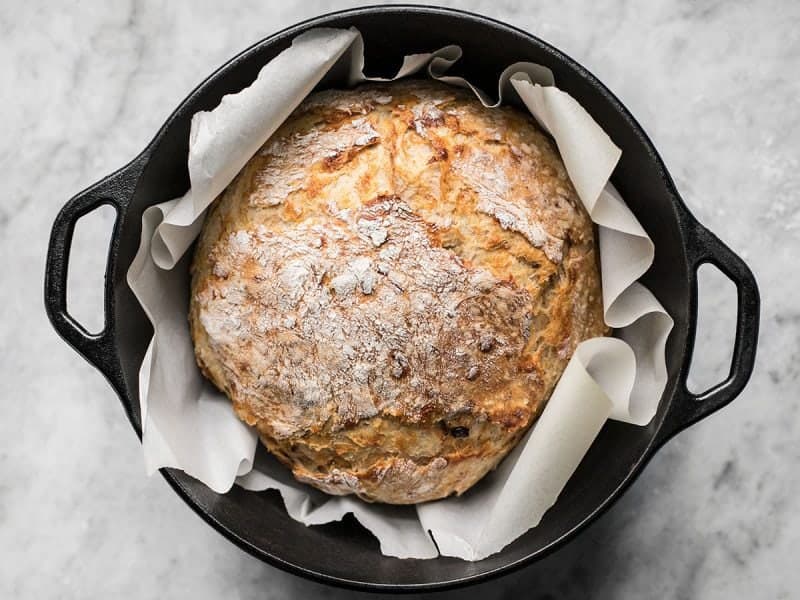 And at that point it should be absolutely GORGEOUS. I mean seriously. Look at that. 😍 Lift the whole thing out of the Dutch oven and allow it to cool before slicing. 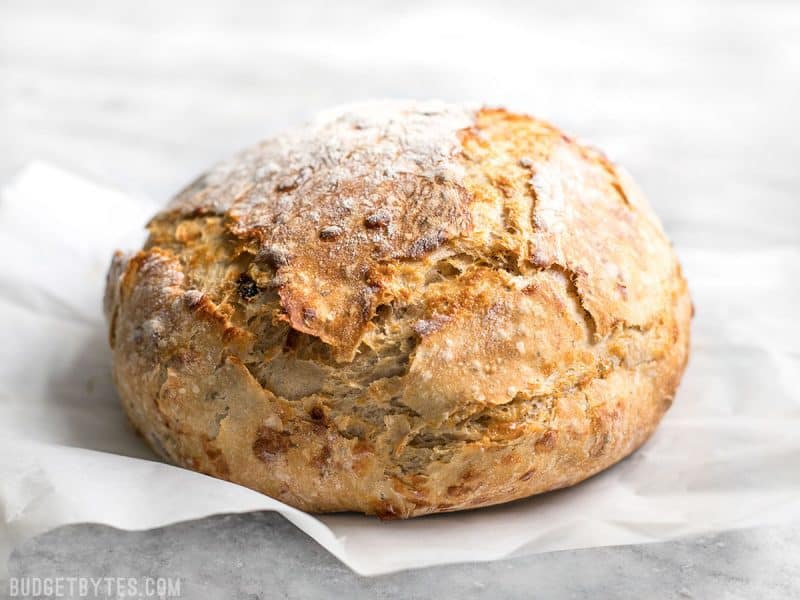 There really is “no knead” for any other type of bread. Har-har-har. 🙈