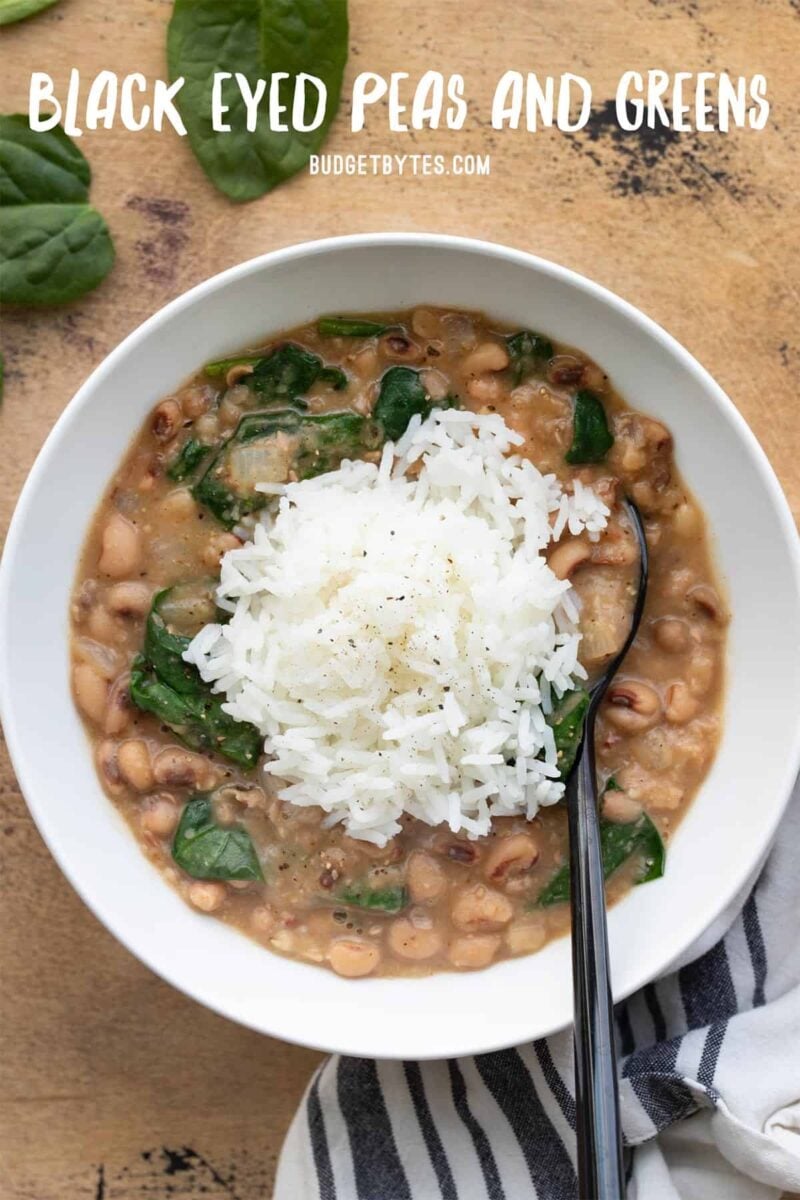 It’s said that eating black eyed peas on New Year’s Day brings you good luck. Now, I’m not usually superstitious, but after a year like 2020, I’m willing to try anything (just kidding, but I’m not). I have an awesome recipe for slow simmered black eyed peas and greens that I made years ago, but it’s a long process that starts with dry peas. So I wanted to make a “quickie” version, using canned black eyed peas, that’s a little faster and easier for times when you haven’t planned ahead.

How to Serve Black Eyed Peas and Greens

There are two basic ways that I like to serve a bit pot of beans or peas like this. Either in a bowl with rice, or in a bowl with a big chunk of crusty bread for dipping. Having some sort of starch to kind of balance the meal out makes it super satisfying and filling.

A little dash of hot sauce on top of your bowl or even a dollop of sour cream on top is also pretty awesome. ;)

Can I Use Dry Peas?

This recipe is specifically made for canned peas, which are already cooked. If you’d like to make something similar using dry peas, follow my recipe for Slow Simmered Black Eyed Peas and Greens.

Can I Add Meat?

The recipe below is vegetarian (vegan, actually), but it’s super easy to add meat to this meal. You have three easy options to keep this a “quick” meal: bacon, ham, or smoked sausage. Whichever one you decide to use, just sauté the meat in the pot before beginning with the onion and garlic in step one below.

Can I Freeze Black Eyed Peas?

Yes! This recipe is great for stocking your freezer. Just divide it into single portions, cool it in the fridge first, then once cool transfer it to the freezer for longer storage (about 3 months or so). Any freezer-safe container will do. To reheat, either use a microwave or heat in a sauce pot over medium-low, stirring often, until heated through.

5 from 11 votes
Ring in good luck for the new year with this quick pot of black eyed peas and greens. Vegetarian and meat options included!
Author: Beth – Budget Bytes 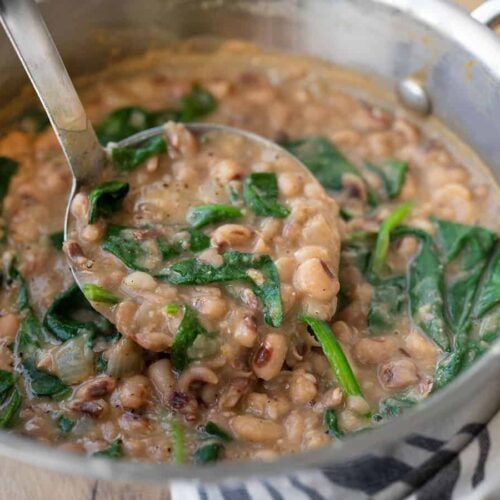 Dice one yellow onion and mince two cloves of garlic. Add the onion and garlic to a large soup pot with 2 Tbsp olive oil and sauté over medium heat until the onions are soft and translucent.

Stir the peas, broth, and seasoning together. Place a lid on the pot, turn the heat up to medium-high, and bring it up to a boil. Once boiling, reduce the heat to medium-low, and let it simmer for about 15 minutes, stirring occasionally.

After simmering, the peas will have swelled even a little bit more and they will be even more soft. Use a large spoon to smash some of the peas against the side of the pot, or use an immersion blender to purée a small amount of the peas.

Smashing some of the peas makes the broth thick and creamy.

Add 4 oz. fresh spinach (½ of an 8oz. bag) and stir until it has wilted into the peas. Give the peas a taste and adjust the salt or seasonings to your liking.

Serve with crusty bread or rice and enjoy your good luck in the new year! :)