Grains are extremely versatile. They provide a blank slate upon which you can build any meal, savory or sweet. This week I decided to experiment with a new grain, farro. Farro is becoming more popular these days, so the next time you see it in the store, grab a bag and have fun! Below you’ll find the simple instructions on how to cook farro, as well as some recipe ideas, but I encourage you to add it to whatever meal you’re making and see what happens! 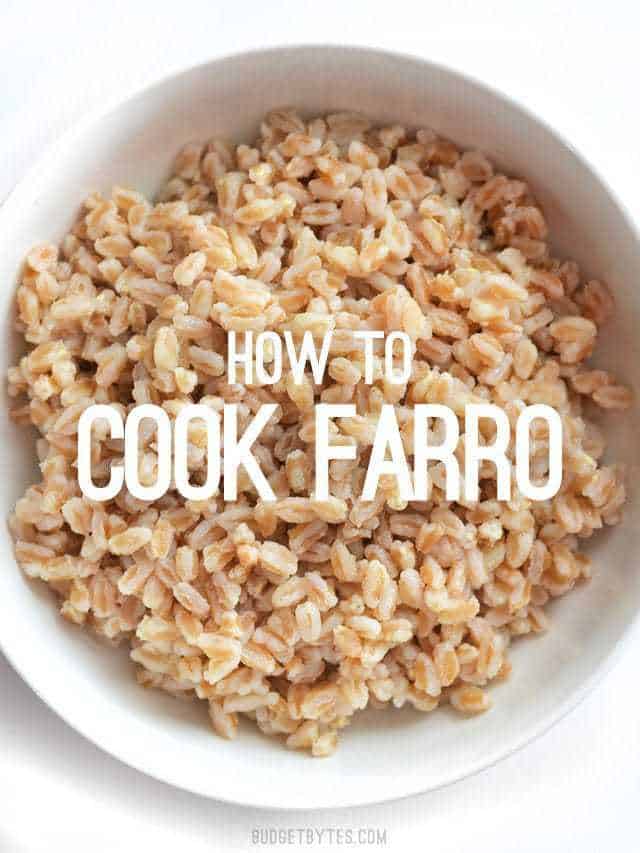 Farro is a small grain with a chewy texture and nutty flavor. It’s often referred to as an “ancient grain” and is thought to be the ancestor of many modern day grains, including wheat. The flavor and texture is actually quite similar to wheat berries, if you’ve had those. Today it’s most commonly grown in Tuscany, so you’ll find this grain used a lot in Italian cooking. It’s usually sold whole (with husk and bran), semi-pearled (no husk and polished to remove some bran), or pearled (all bran removed).

How to Use Farro

Farro has a nutty flavor (more so when bran is intact) and a delightfully chewy texture–my favorite part! The shape holds up well to cooking, which means it’s great for tossing into soups. The fun, chewy little grain also makes a great addition to salads where they can add quite a bit of texture and inexpensive bulk.

Here are a few recipes to try with farro:

Where to Buy Farro

Since farro is pretty trendy, it can fetch a high price when pre-packaged. I bought my farro from the bulk bins at Whole Foods for $1.69/lb. (organic). Comparatively, the pre-packaged Bob’s Red Mill farro was about $5/24oz. bag ($3.33/lb.) at the other grocery store. You should be able to find farro at most health food stores, some larger grocery stores (especially if they have a natural foods section), or Italian markets. 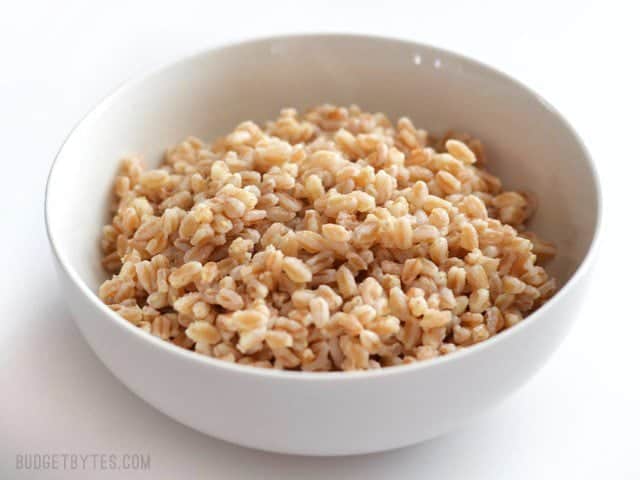 What Kind of Farro Should I Use?

As I mentioned earlier, you can get whole farro, semi-pearled farro, or pearled farro. Whole farro, which has all of the bran intact has the most nutrients, but it also takes the longest to cook. The more bran that is removed by the polishing (or pearling) process, the more nutrients are lost and the quicker cooking it becomes. I prefer semi-pearled because it cooks relatively quickly, still contains a good amount of nutrients, and has a chewy-yet-soft texture. Because the hull on whole farro requires some extra steps for cooking and semi-pearled farro is much more common in the United States, I’ll be giving cooking instructions for semi-pearled farro.

Because farro holds up to cooking quite well, you can actually cook it like pasta (boil in an excess of water, then drain in a colander). No need to measure exact water ratios, like for rice. The degree to which the farro breaks down is much more dependent on the length of cooking than the amount of water or liquid used. You can cook it down to a creamy porridge or risotto consistency, but it just requires a little extra time (and closer attention to the water/grain ratio).

How to Cook Farro

5 from 1 vote
This short tutorial takes you through the basics of how to cook farro, plus a few facts about this versatile, chewy, and flavorful grain.
Author: Beth - Budget Bytes 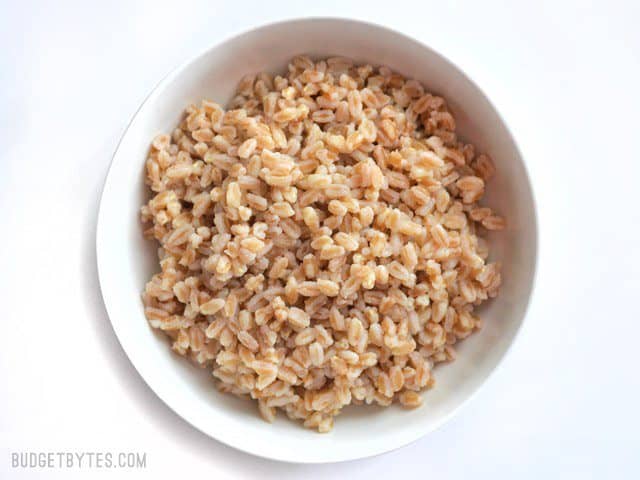 How to Cook Farro – Step by Step Photos 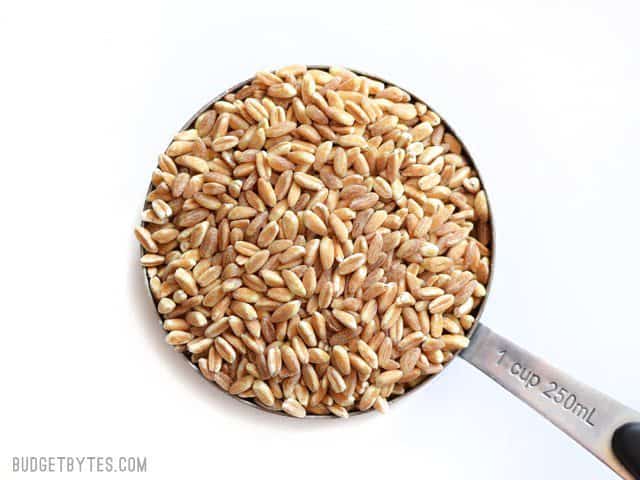 This is what the uncooked farro looks like. You can tell this is “semi-pearled” farro because you can see some of the brown bran, and in some areas it is polished through to the white starchy center. Semi-pearled farro usually needs to simmer for 20-30 minutes to become tender, but the time will ultimately depend on how much bran is removed. 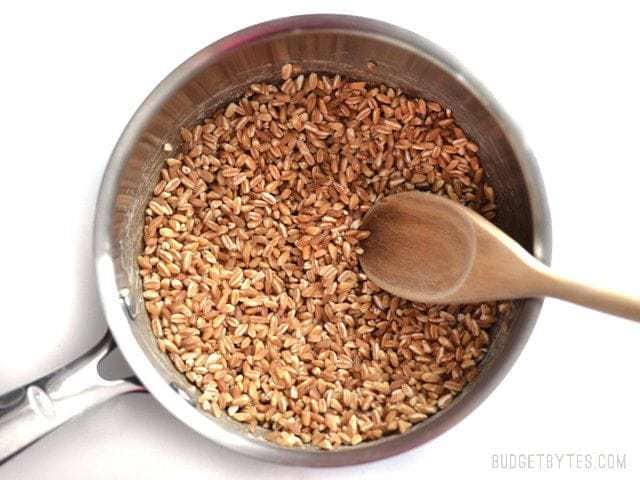 This step is optional, but it does boost the nutty flavor of your farro. Place the dry farro in a pot and cook over medium heat, while stirring, for 2-3 minutes. You should smell a nice toasty aroma, similar to the smell of bread in toaster. When you smell that, you’re good. 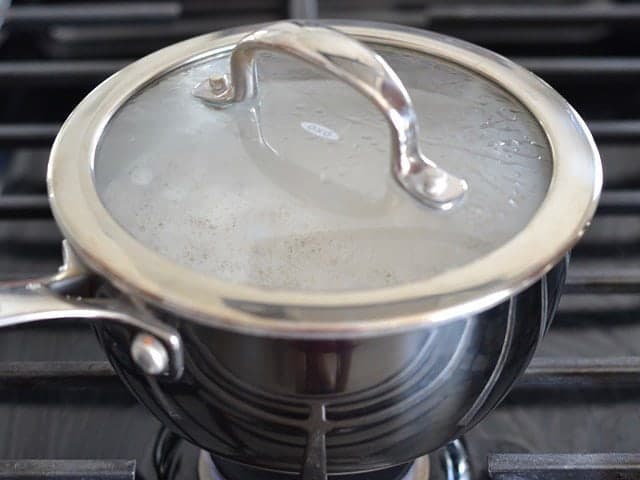 After toasting, add enough water to cover the farro by a few inches, plus a pinch of salt. For reference, I cooked 1 cup farro and added 3 cups of water plus about 1/8 tsp salt. The pot should already be hot from toasting the farro, so it will come to a boil quickly. Once boiling, place a lid on the pot, turn the heat down to low, and let it simmer for 20-30 minutes, or until the farro is tender. Test the farro starting at about 15-20 minutes to avoid over cooking and to see where you personally like the texture. 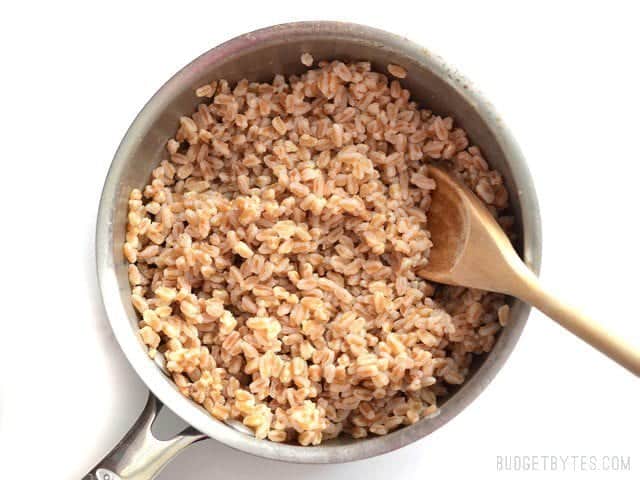 The farro will absorb a lot of the water, but the excess should be drained off. You can either use a colander or just carefully tilt the pot while using the lid to hold the grains in place. Drain off as much water as possible to prevent it from turning mushy. I like to let the farro cool just slightly before fluffing it up with a spoon. 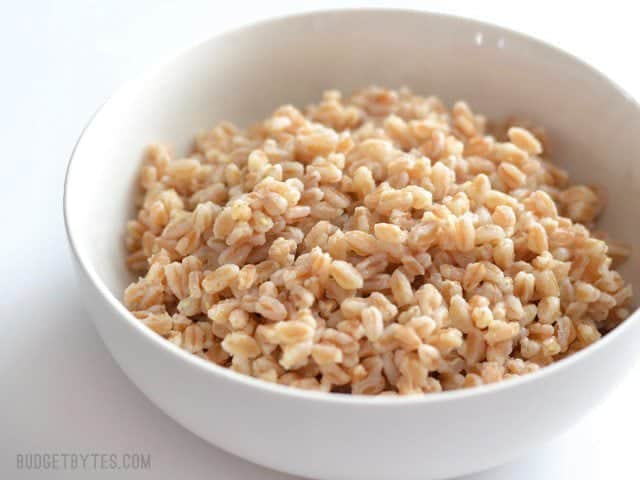 The farro is now ready to eat, refrigerate, or freeze. If freezing the farro, I suggest cooling it completely in the refrigerator before transferring it to a freezer bag, squeezing out as much air as possible, then freezing.

Can I Cook Farro in an Instant Pot?

One of the reasons I bought myself an Instant Pot for Christmas was to make cooking beans and grains fast and easy. This farro, on the other hand, cooked on my stovetop in just under 20 minutes, so I don’t feel it was worth using the Instant Pot. Had I been cooking whole farro, which takes closer to an hour to simmer on the stovetop, I would definitely be using my Instant Pot. :)

Already a farro fan? Share your favorite ways to eat farro in the comments below!

This post may contain affiliate links that won’t change your price but will share some commission. As an Amazon Associate, I earn from qualifying purchases.