Last weekend my mind drifted to my 5-Ingredient Freezer Biscuits, as it often does on lazy Sunday mornings, and that got me thinking about breakfast sandwiches. It was only a split second before I started to wonder what would happen if I baked a layer of ham and cheese inside my 5-Ingredient Freezer Biscuits. I tested those Ham and Cheese Biscuits idea today and let me just say, best. Idea. Ever.

But make no mistake, these breakfast biscuit sandwiches are super rich and indulgent, so save this recipe for a special occasion. While they are delicious, they are not something I could (or would suggest) eating every single day. 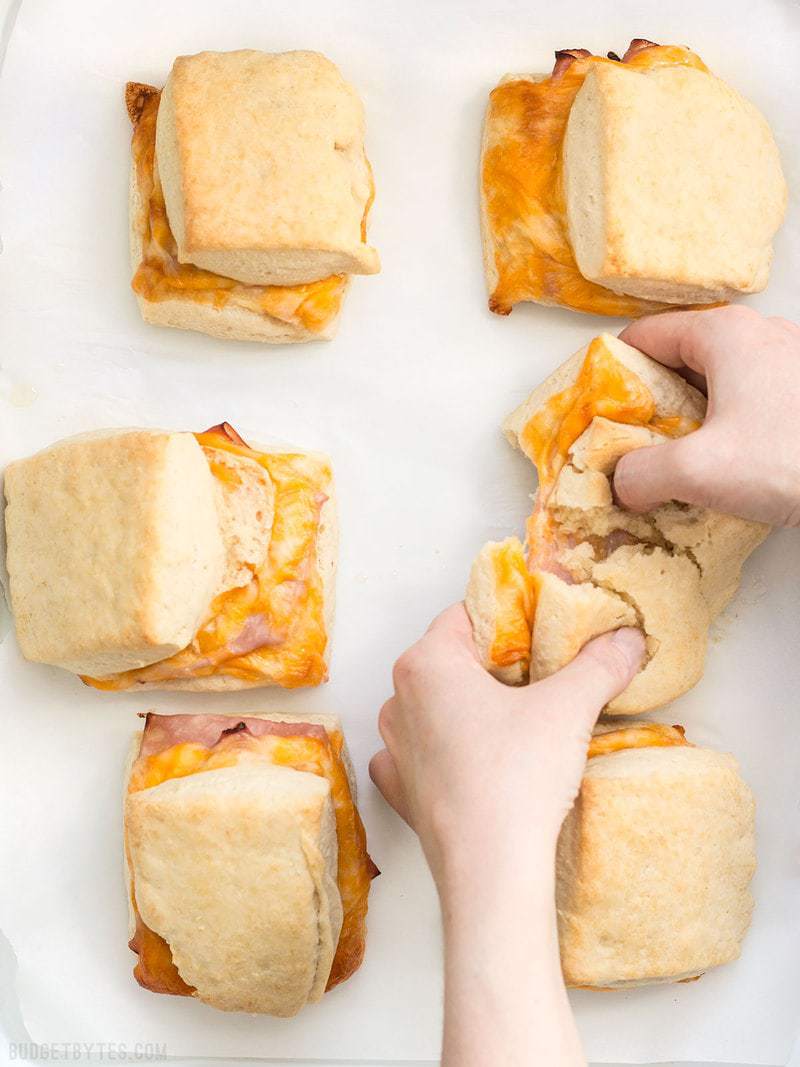 Just like the original freezer biscuits, I’m sure you could assemble these, freeze them, and then bake one, two, or three as needed straight from the freezer. I haven’t tested any frozen Ham and Cheese Biscuits yet because I just went ahead and baked ’em all today, but just like with the original plain biscuits, they will probably need a few minutes more in the oven when baked from frozen.

I brushed a little butter on top of my Ham and Cheese Biscuits after baking, but I’ll be honest, I don’t think they needed them. The biscuits themselves are so fluffy and rich that the butter on top was almost too much, so I didn’t write that into the pricing. ;)

4.46 from 11 votes
These Ham and Cheese Biscuits are a super indulgent, yet super easy treat for your weekend breakfast or to serve guests. 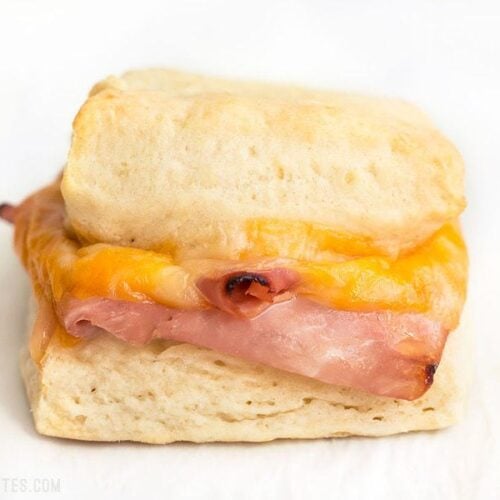 *Only heavy cream (35-38% butterfat) can be used for this recipe. Whole milk or half and half will not produce the same results. 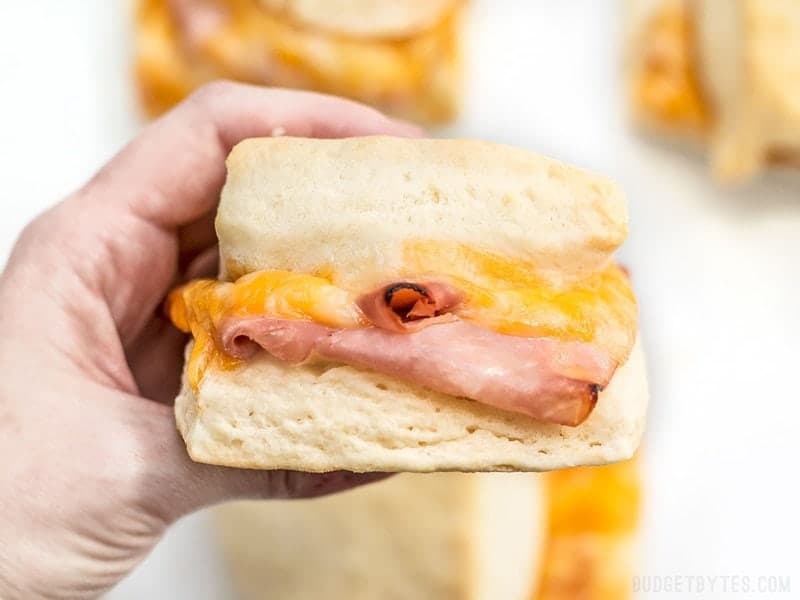 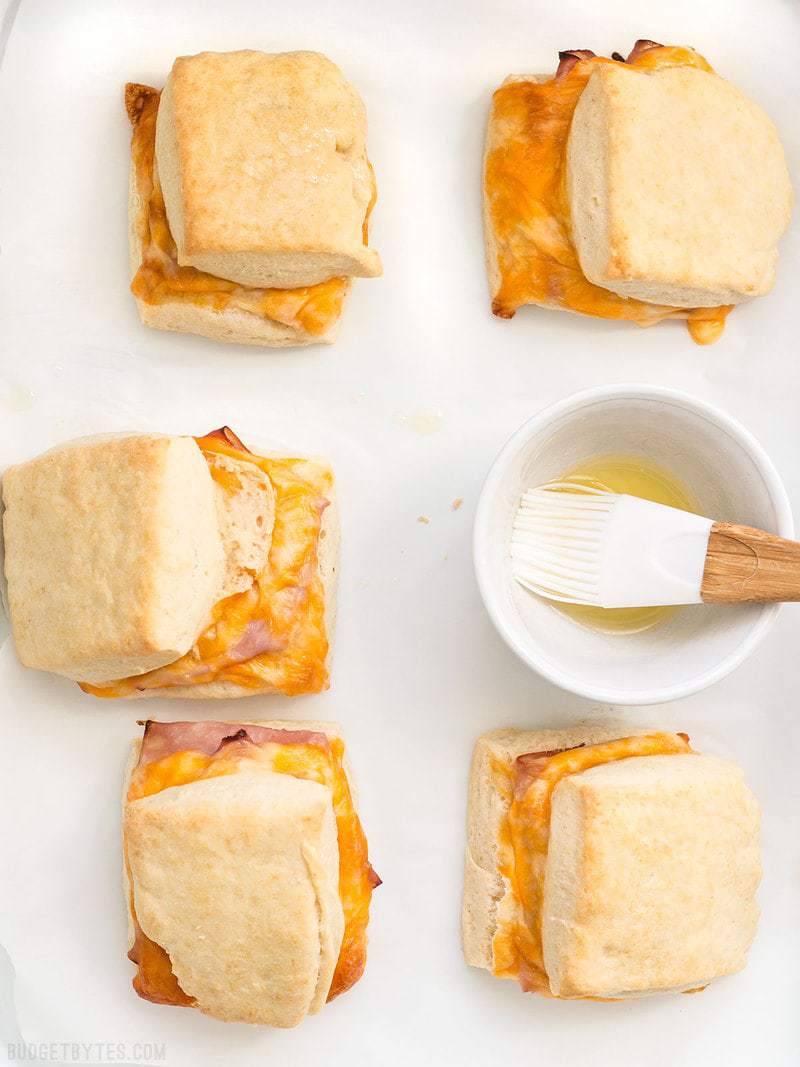 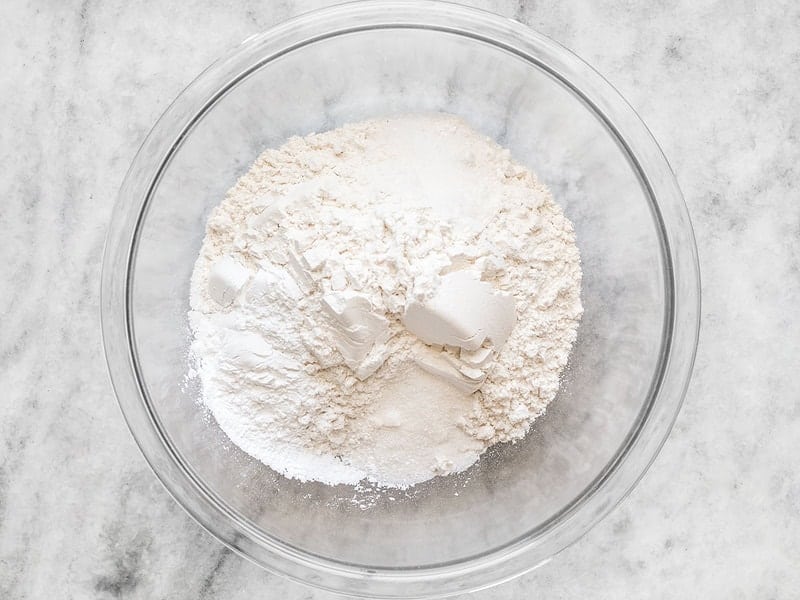 Preheat the oven to 400ºF. In a large bowl combine 2.5 cups all-purpose flour, 1 tsp salt, 1/2 Tbsp sugar, and 4 tsp baking powder. Stir them together until they are very well combined. 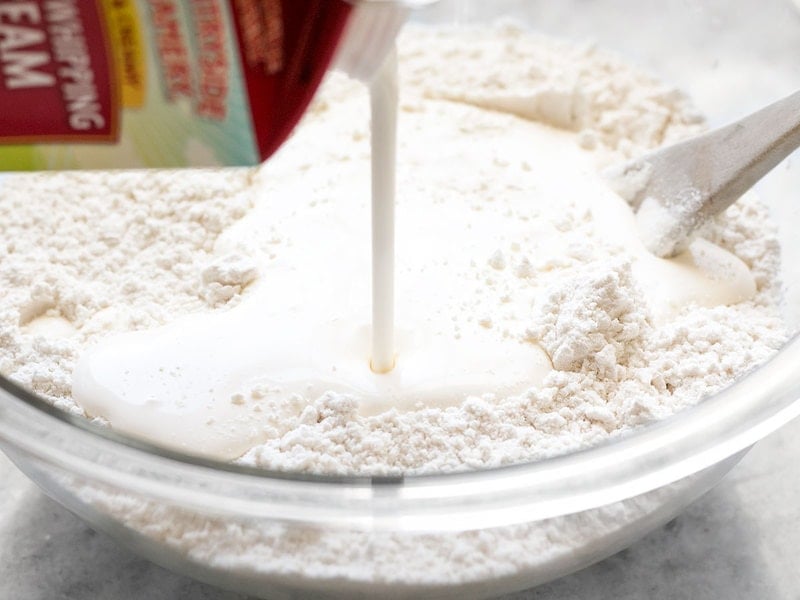 Pour one pint of heavy cream into the flour mixture. 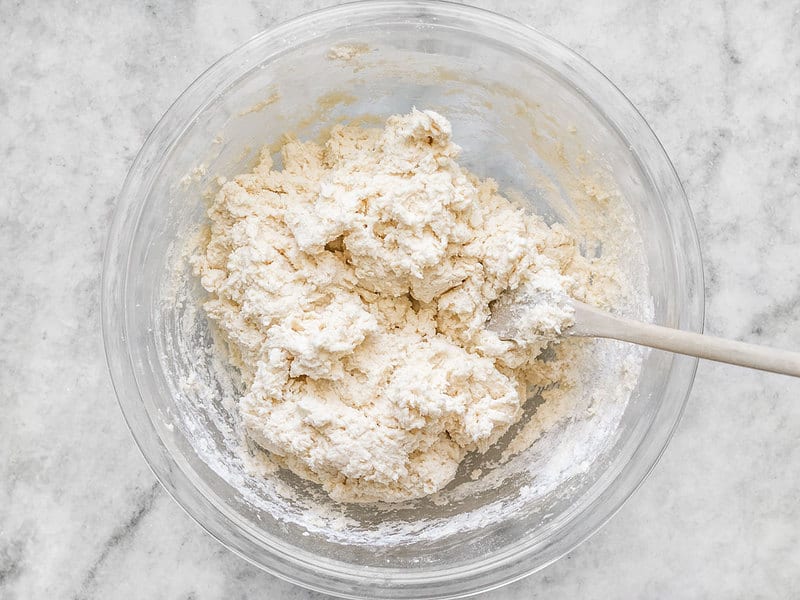 Stir until all the flour is moistened and a sticky shaggy dough forms. 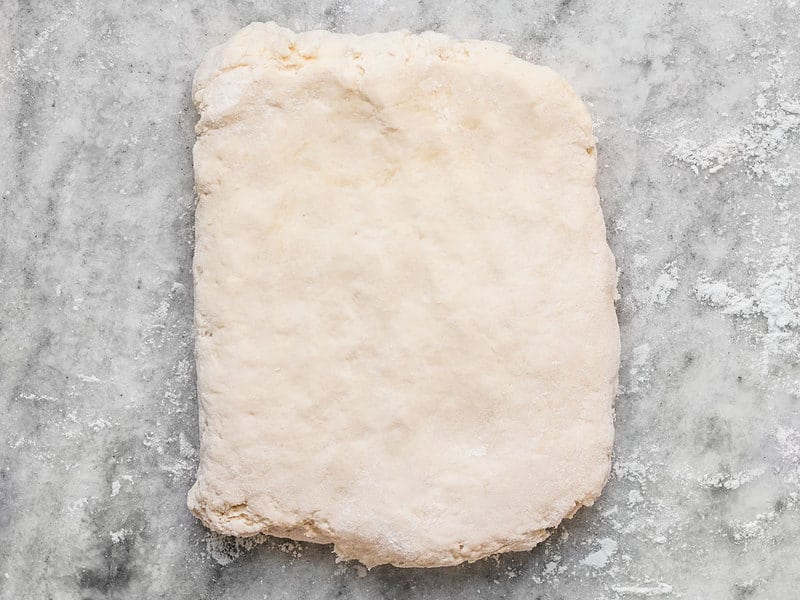 Turn the dough out onto a well floured surface and press it down into a rough rectangle. 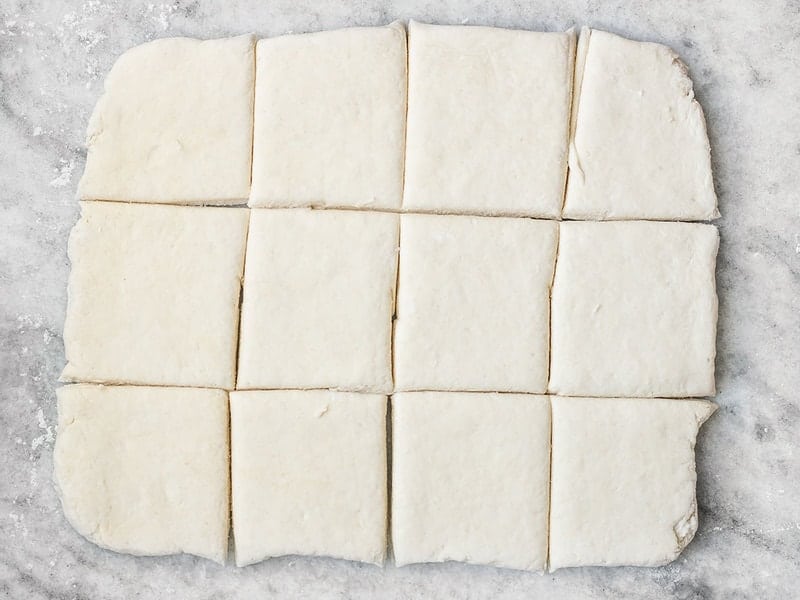 Use a rolling pin to roll the dough into a flatter rectangle, about 8×11 inches and about a half inch thick. Use your hands to shape the corners and make the rectangle more even. Cut the rectangle into 12 squares.

Stack two slices of ham and one slice of cheese on each of six of the squares, then top them with the remaining six squares. Place them on a baking sheet lined with a piece of parchment paper. 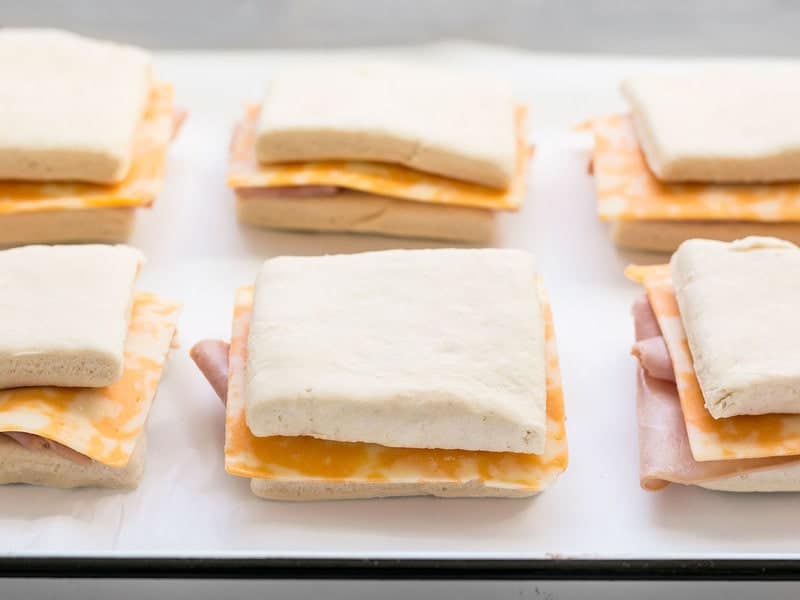 Here’s the side view so you can see how thick/thin the biscuits were rolled out. They puff up QUITE a bit, so you want them fairly thin. 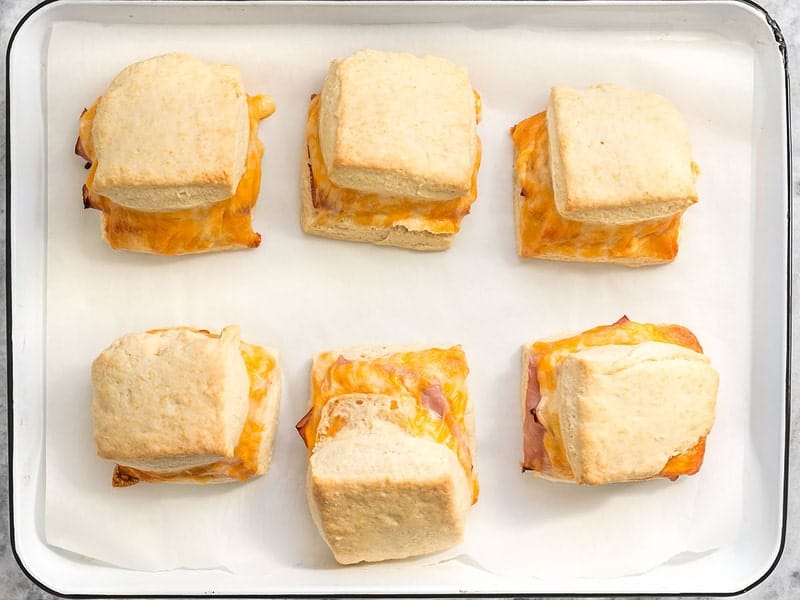