One of my favorite things in the world is Yellow Jasmine Rice. It’s so flavorful and fragrant that I could eat an entire bowl by itself, but that wouldn’t exactly be a complete meal. :P So, I decided to add a couple extra ingredients to round it out and make it a complete meal. I found some chicken thighs in my freezer (leftover from Lemon Pepper Chicken with Orzo) and I added some peas for extra color, flavor, and texture (another “back of the freezer” find). Everything cooks in the same skillet for more flavor and less cleanup. I love it when you can cook the main dish (chicken) and the two sides (rice and peas) all in one vessel. Hello, Yellow Rice Chicken Skillet! I like simple. Very, very simple. 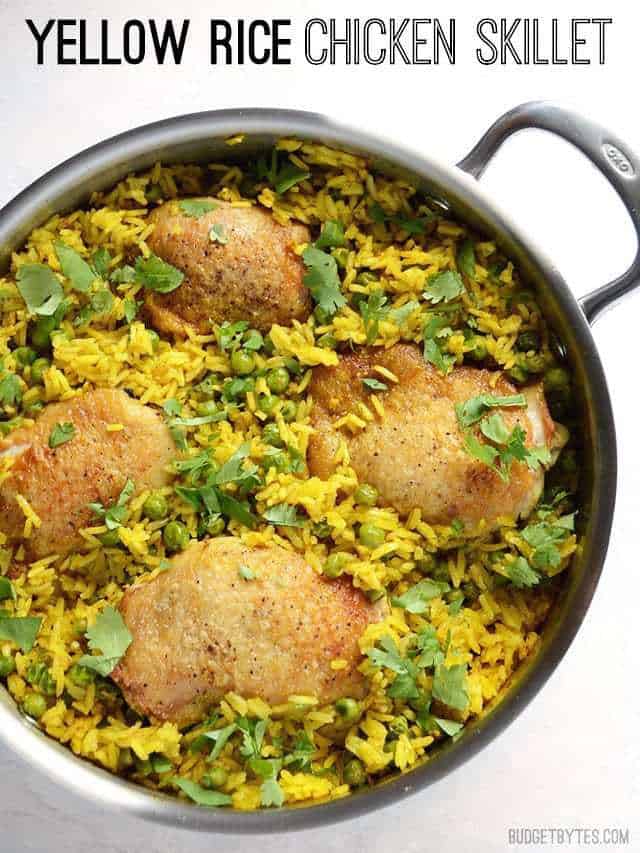 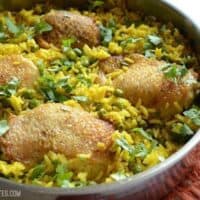 *I use Better Than Bouillon brand soup base for my broth. It's less expensive, has an extended shelf life in the refrigerator, and you can mix up any quantity you need.
Nutritional values are estimates only. See our full nutrition disclosure here.
Tried this recipe?Mention @budgetbytes or tag #budgetbytes on Instagram! 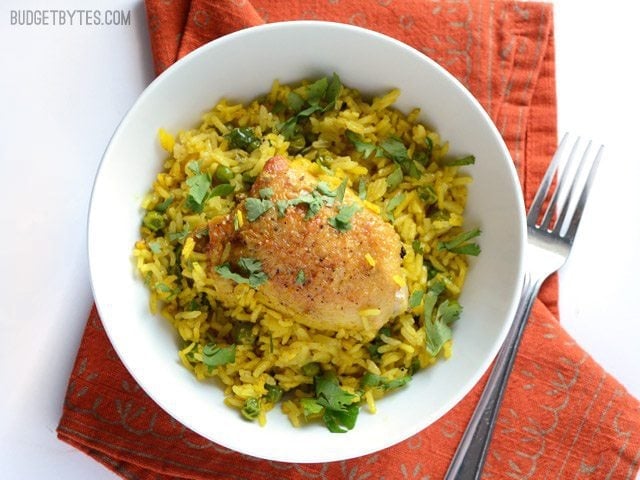 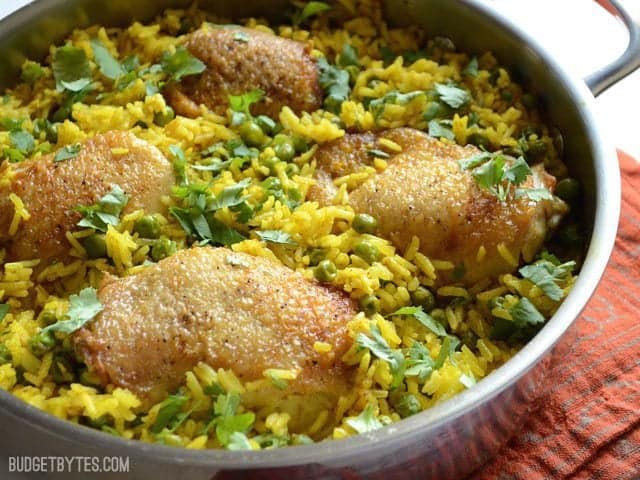 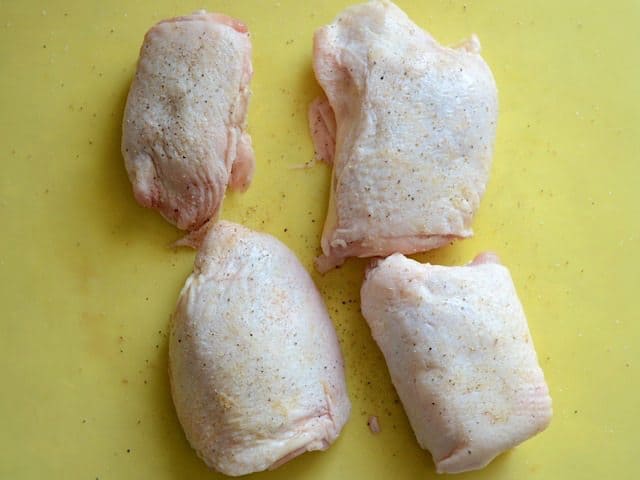 Start with four bone-in chicken thighs, with skin. Pat them dry with a paper towel, then season both sides with salt and pepper. Drying the surface helps them brown better in the skillet. 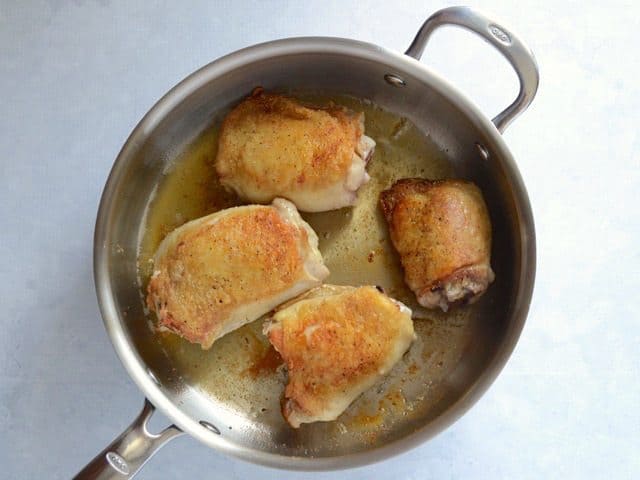 Heat a large deep skillet over medium flame. Once hot, add 1 Tbsp vegetable or canola oil. Tilt the skillet to spread the oil over the surface. Add the chicken thighs, skin side down, and allow them to brown before moving them (they will actually kind of stick to the surface until they are brown, at which point they usually “release”). Flip the thighs and brown on the other side. Once both sides are browned, remove the chicken to a clean plate. 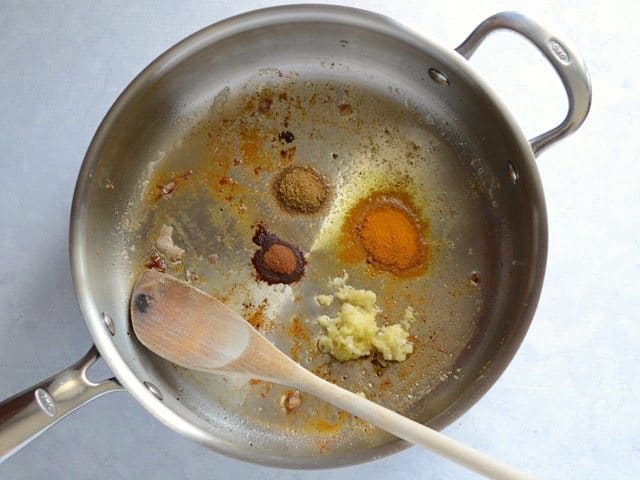 If a lot of fat rendered off of the chicken thighs, pour some out until there is about a tablespoon or so left in the skillet. Add 2 cloves of minced garlic, 1 tsp turmeric, 1/2 tsp cumin, and 1/4 tsp cinnamon. Sauté the garlic and spices for about a minute, or just until the garlic is soft and fragrant (but has not browned). 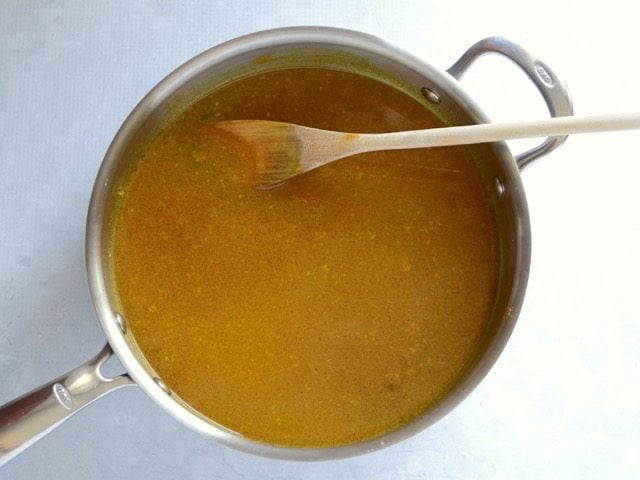 Deglaze the skillet with 2.5 cups of chicken broth. “Deglaze” just means to use the chicken broth to dissolve any browned bits (called fond) off the bottom of the skillet. The browned stuff is the good stuff. 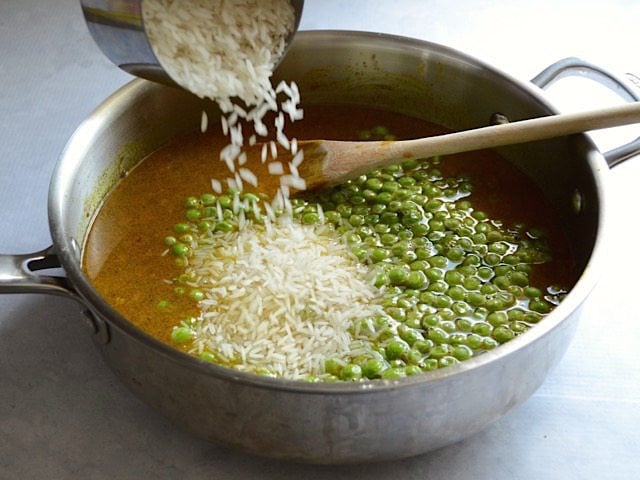 Finally, add 1.5 cups of frozen peas and 1.5 cups long grain jasmine rice. Give the skillet a quick stir to distribute the spices among the peas and rice. 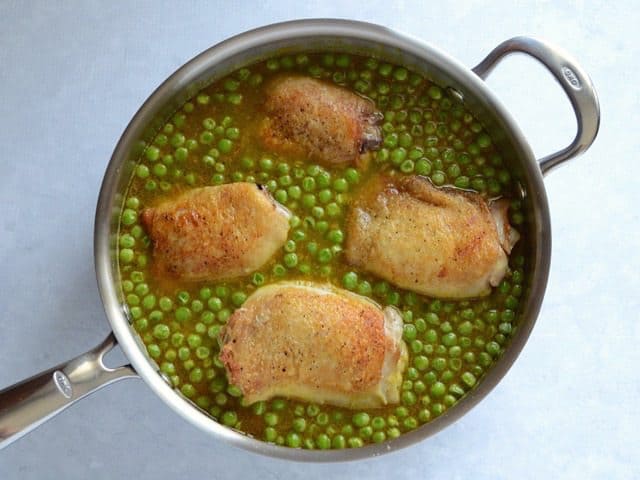 Return the browned chicken to the skillet, nestling it into the rice and peas. 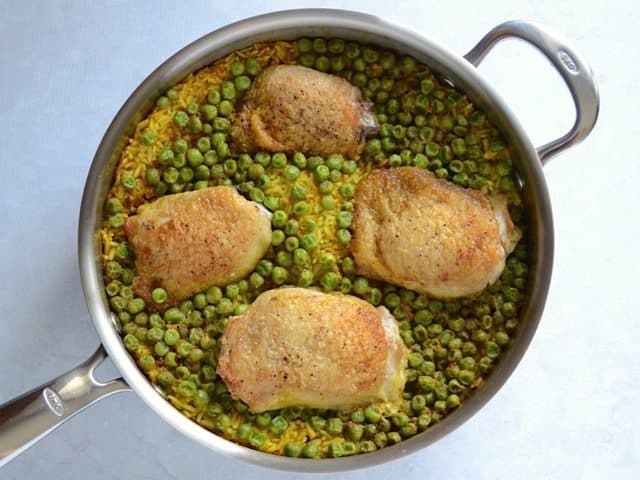 Place a lid on the skillet and turn the heat up to medium high. Allow it to come to a boil. Once it boils, reduce the heat to low (or just above low – so that it doesn’t stop simmering) and let the skillet simmer for 25 minutes. After 25 minutes, turn the heat off and let it sit undisturbed, with the lid on, for ten more minutes. The photo above is what it looks like after simmering and resting. 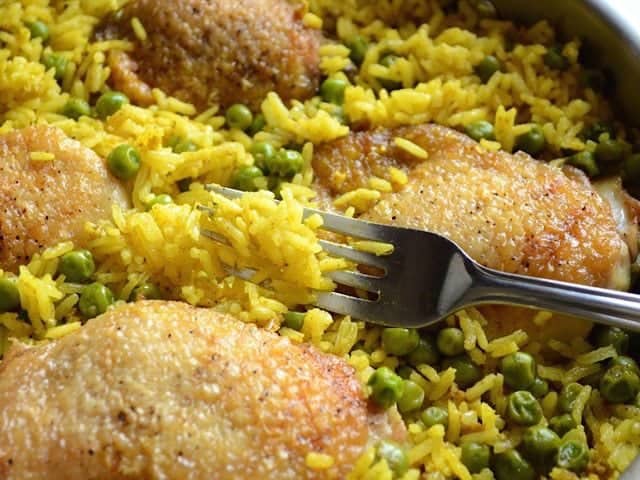 Use a fork to fluff the rice and stir it up a bit. All the peas and many of the spices float to the top while it simmers, so use the fluff time as a way to make sure everything is evenly mixed. 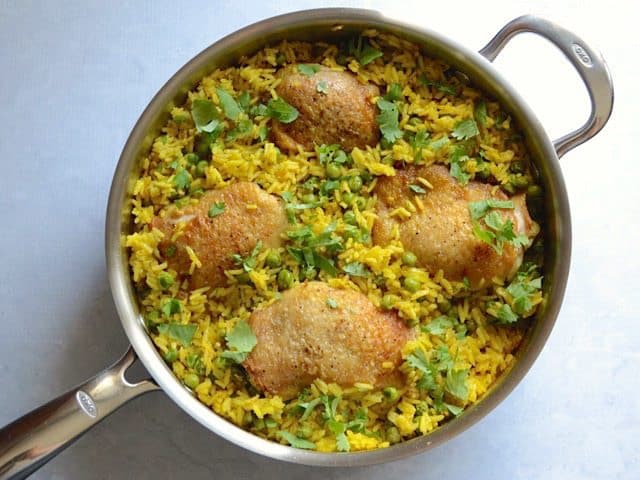 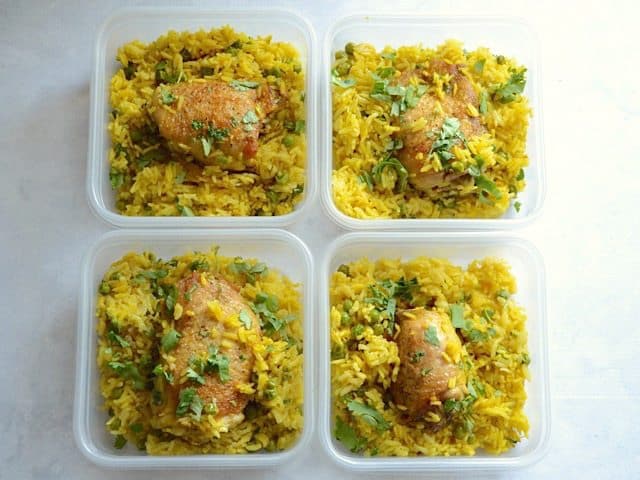 Of course, I divided my Yellow Rice Chicken Skillet up into individual containers so I could just grab one at a time and microwave it to reheat. These also freeze decently well. 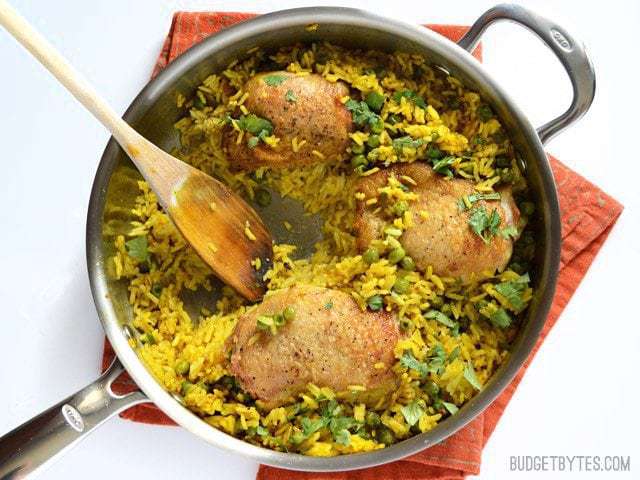 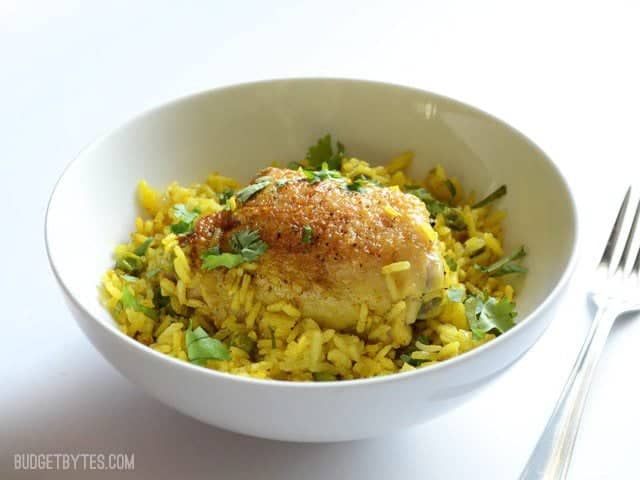 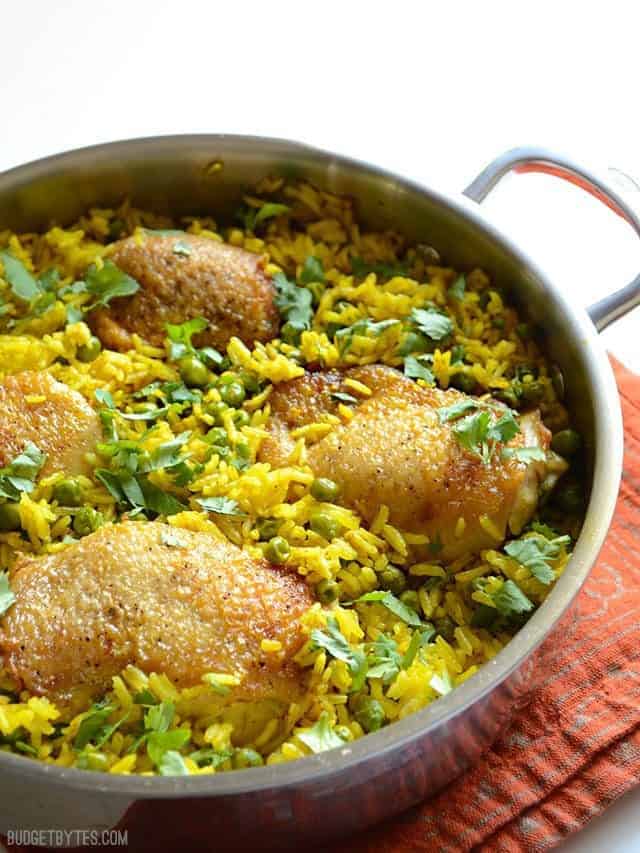 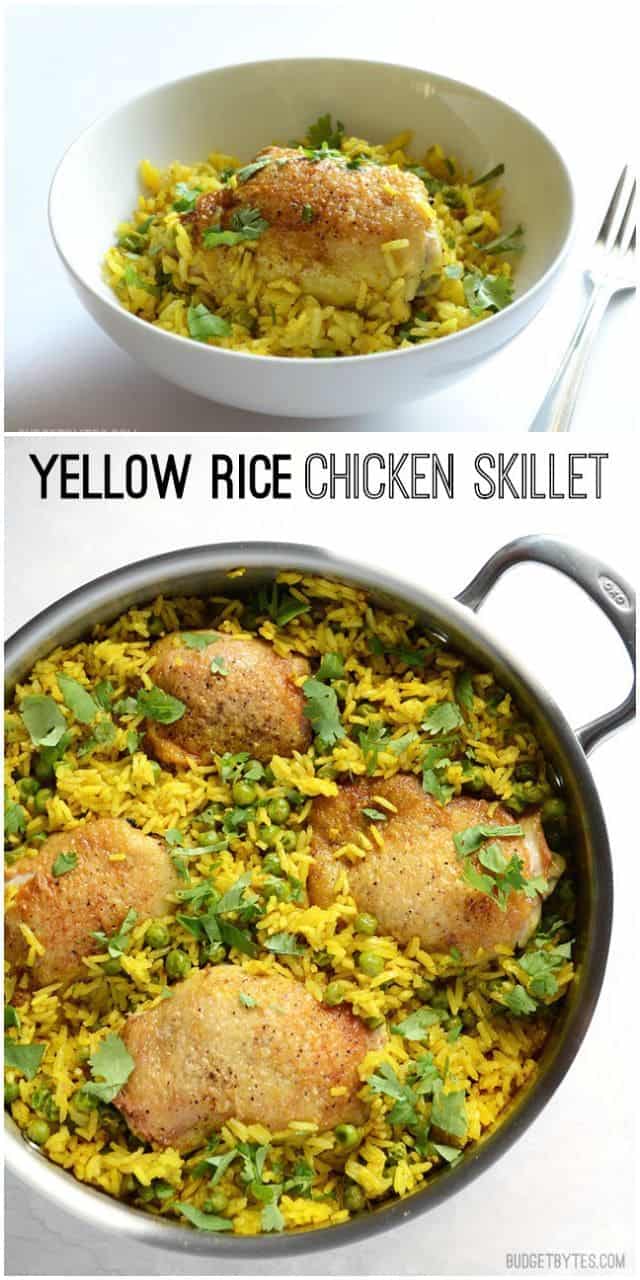