Okay, this one was kind of a candy making FAIL, but I’m still posting it because even in its failed state it was so good that I couldn’t stop munching on it.

Why was it a candy fail? Because my caramel re-crystalized. Instead of being a glossy, glass-like coating, it turned a little grainy and dull. Does it taste bad? No way. Do I know what caused this? Probably. Apparently, if there are any grains of unmelted sugar left anywhere (like on the spoon that I used to stir with), it can set off a chain reaction that causes re-crystalization throughout all of the candy. That’s exactly how they make rock candy, in fact, and that’s probably what happened here. I burned my finger and was so happy eating the crystalized caramel corn that it wasn’t even worth it to make a second batch! So, I’ll leave the experimenting up to you. I had no crystalization when I made my previous batch of caramel corn.

Speaking of that previous batch of caramel corn, I used the same exact technique and the same recipe minus some salt and plus some sriracha. Super easy. Oh, and I didn’t use any nuts, but I bet they would be AWESOME in this.

The flavor is totally unique. It’s sweet (obviously), salty (a little more so than expected), spicy, and garlicky. If you’re unsure of whether or not you’d like something that combines sweet and garlicky, you might want to skip this one. It took me a second to warm up to it, but in the end I thought it was addictive. I can definitely say that not everyone will agree. Sriracha-heads, though, probably will.

So here it is!! SRIRACHA CARAMEL CORN! 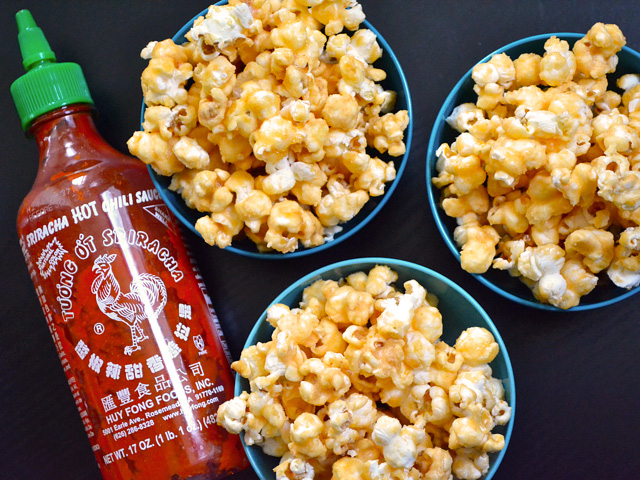 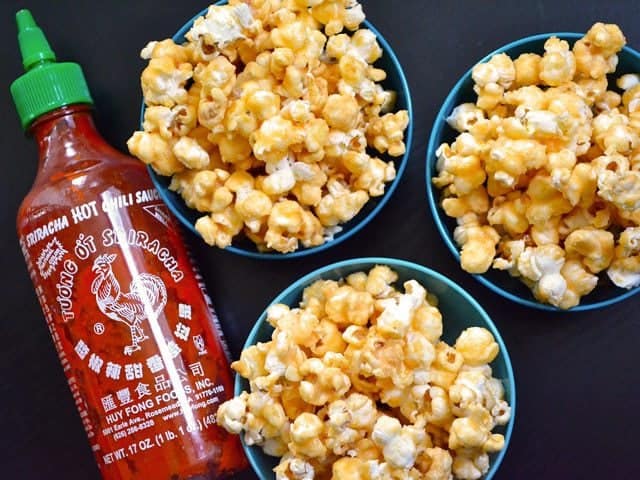 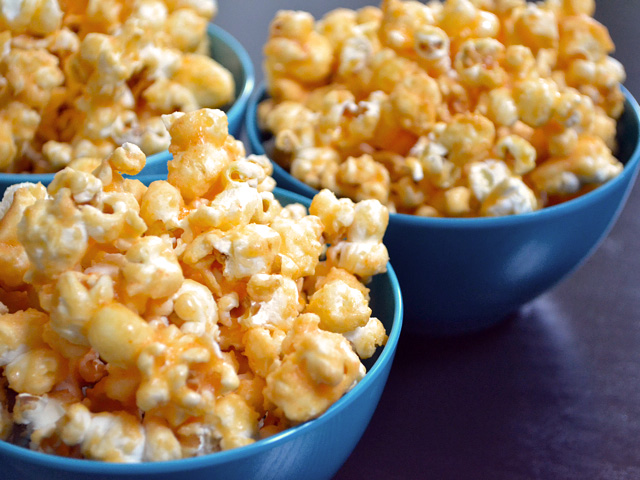 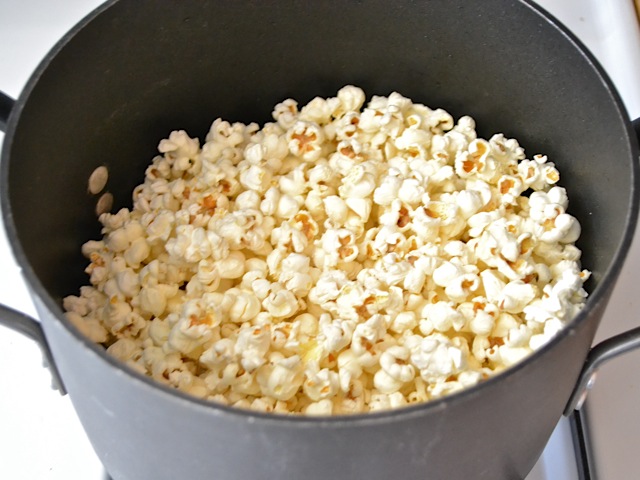 First, pop your corn. If you’ve never made popcorn on the stove top, you’re SERIOUSLY missing out. It has so much more flavor and a much better texture than microwave popcorn. Plus, it’s super easy and doesn’t really take any more time than a bag of microwave corn. All you do is add the vegetable oil and one kernel to a large pot. Put a lid on top and turn the heat up to high. Hang out for a minute and wait for that kernel to pop. As soon as it does, add the rest of the kernels, put the lid back on top, and give the pot a good shake and swirl. The rest of the kernels will soon begin to pop and you just sit there and wait for them to slow down. When they do, just turn off the heat. THE END. 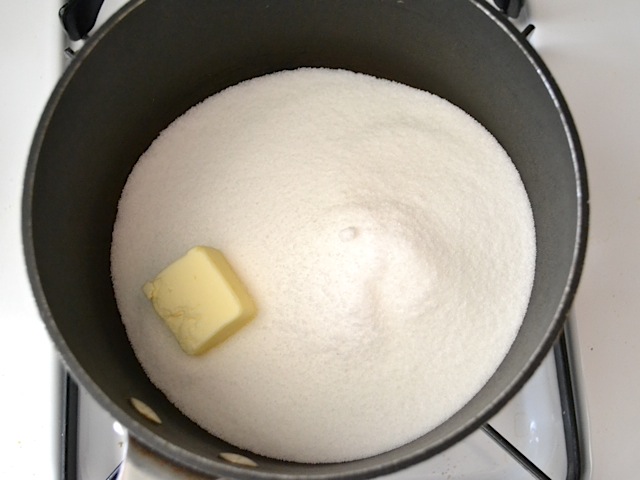 Set the popped corn aside and move on to the caramel. Start with the sugar, butter, salt, and water in a pot. I cut the salt from my original caramel corn recipe in half because the sriracha salt in it, but it was still pretty salty. So, if you want, you can try 3/4 teaspoon. 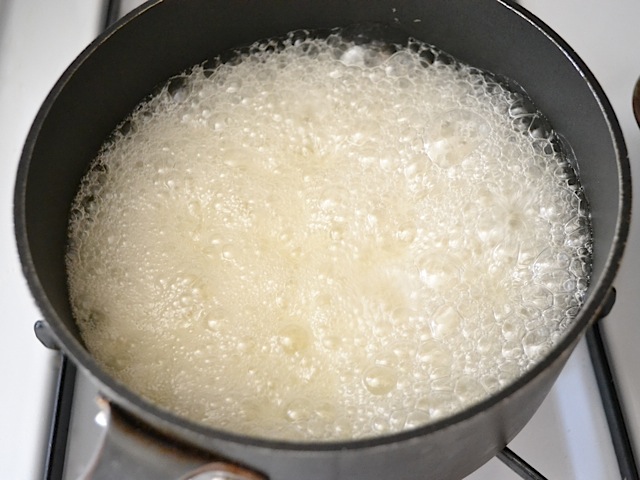 Turn the heat up to medium and allow the mixture to come up to a boil. At that point turn the heat down just a bit so that it doesn’t boil over. Continue to let it boil for about ten minutes – no need to stir. 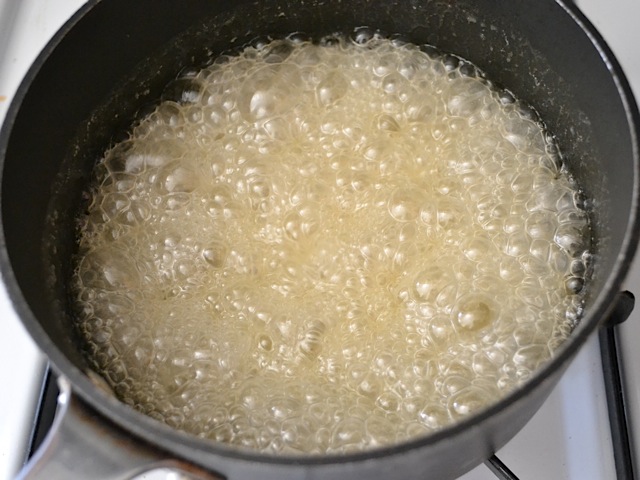 As it boils the moisture will evaporate away and it will become thicker and slightly golden in color. At that point you can turn the heat off. Also, preheat the oven to 250 degrees and line a baking sheet with either parchment or foil. Coat that parchment or foil with non-stick spray. 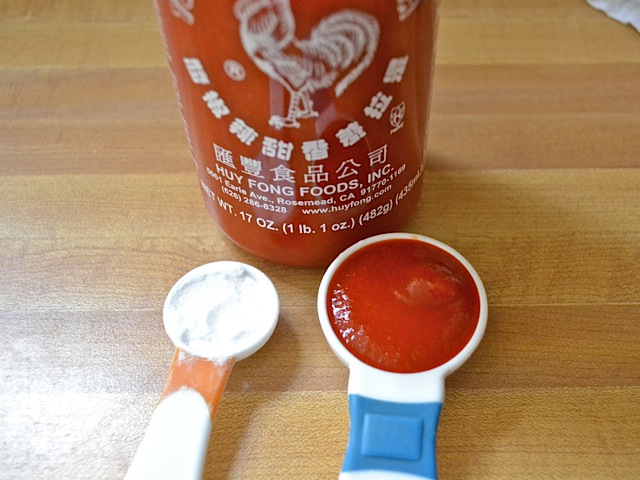 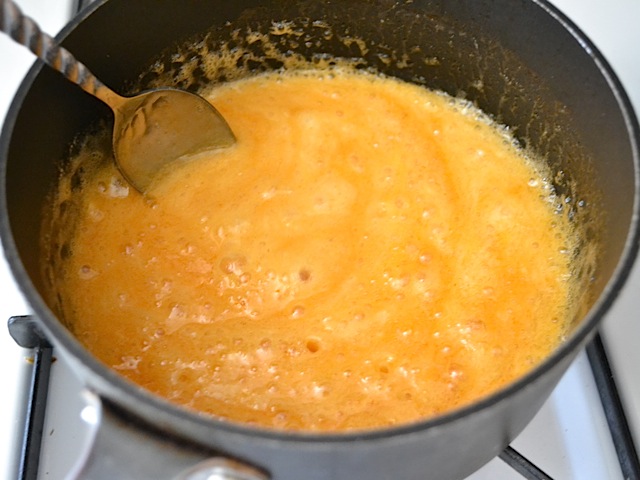 Stir the baking soda and sriracha into the boiled sugar. It will puff up and turn orange. 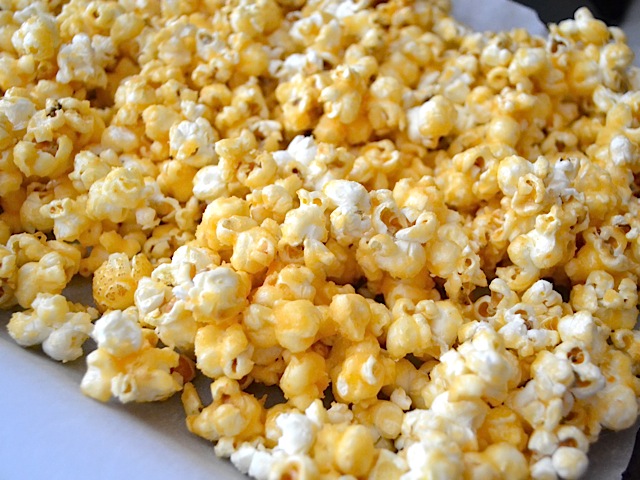 Now, working quickly, pour the orange sugar mixture over the popped corn in the pot. Use a large spoon to stir it all together so that the corn is coated. The sugar will start to harden as it cools so you need to work quickly. Make sure to use a large spoon and be careful because if that molten sugar gets on your skin it will burn you down to the bone – trust. Now, spread that corn out on your prepared baking sheet and bake it for 10 minutes. 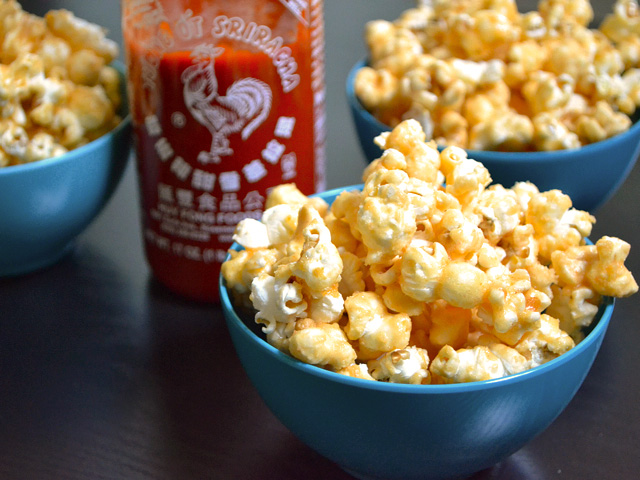 Allow the corn to cool and then go crazy! 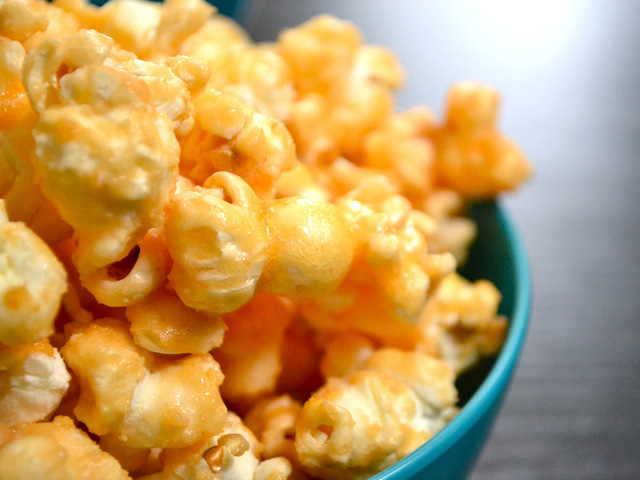