I’m the type of person who could just eat marinara sauce with a spoon. I love it just that much. BUT that feels kind of weird so I try to find other vehicles to slather with the yummy sauce. Sure, there’s always pasta, but there are so many other options! This week I found eggplant on sale for $1.29 each (instead of per pound, which makes it a great deal!), so I cut them in half, roasted them until they were rich, tender, and caramelized, then piled an awesome homemade meat sauce on top. This Roasted Eggplant with Meat Sauce is SO GOOD. 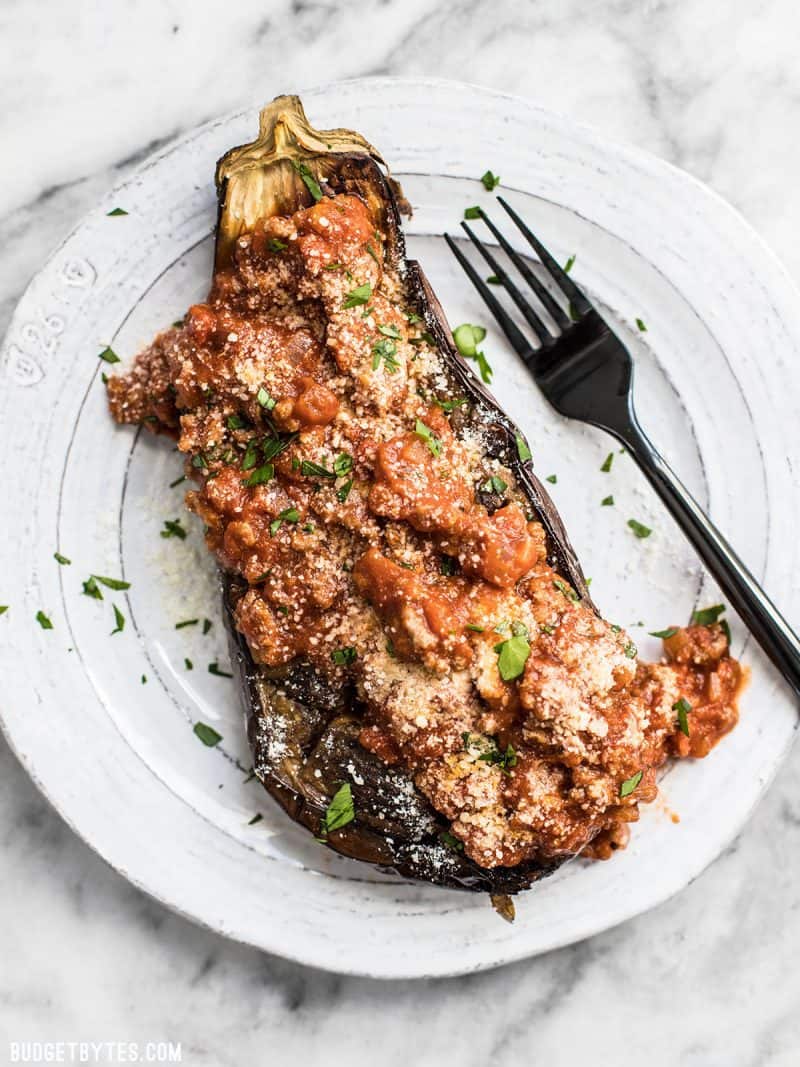 Roasting eggplant does take some time (about an hour), so I had plenty of time to make my own meat sauce. If you want to make this recipe even easier, you can always sub the homemade meat sauce for your favorite jarred sauce, but I just want to stress how easy the meat sauce is to make yourself. Seriously easy. So easy that I might just be making it like once per week to keep on hand to pour over whatever roasted vegetables I happen to have that week.

Don’t want to do a meat sauce? Sautéing some minced mushrooms is a really good alternative. It will give your sauce more bulk and keep this more of a main dish than just a side. Just make sure to cook those mushrooms down until the liquid in the pot dries up and you start to see some browning action. The browning is where you’re going to get all the flavor.

Can You Eat the Eggplant Skin?

Yep! The dark skin on eggplant is completely edible, although some people don’t enjoy the texture. The skin does provide a lot of fiber and nutrients, but if you find that you don’t like it, simply scoop the eggplant flesh out of the skin as you eat. The eggplant will be quite soft and easy to separate from the skin. 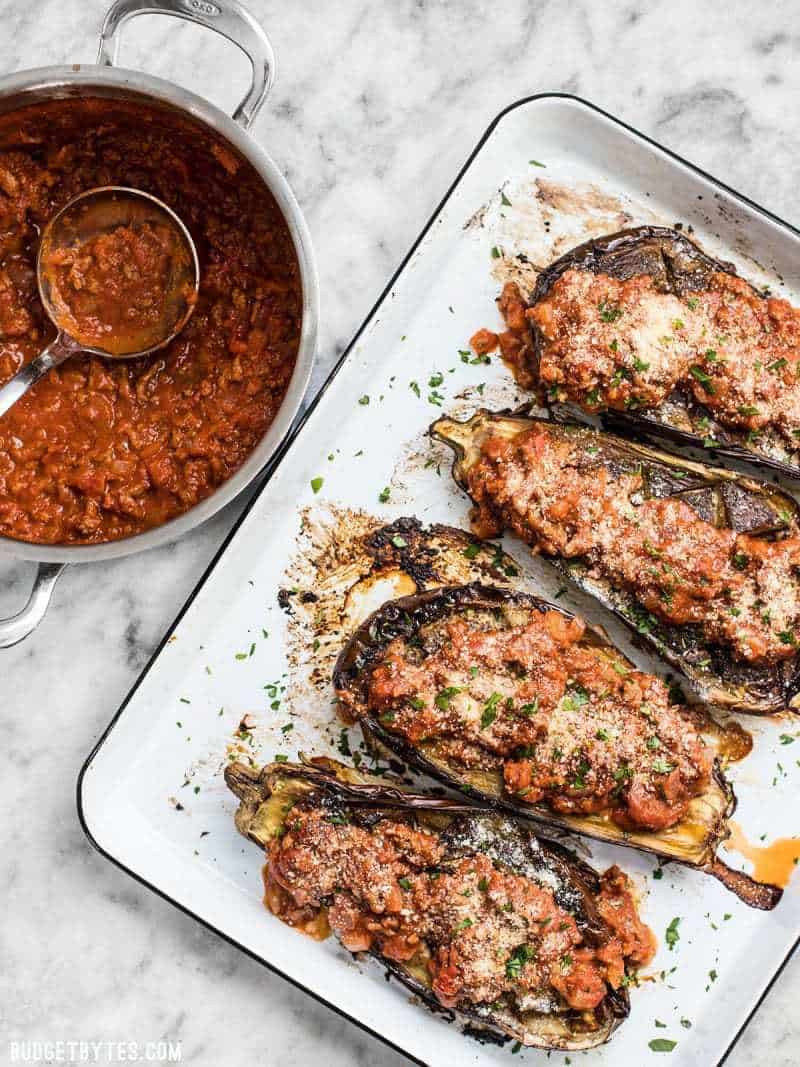 4.91 from 22 votes
Roasted Eggplant with Meat Sauce is an elegant low carb main dish that will leave you satisfied. Pair with a simple green salad for a complete meal. 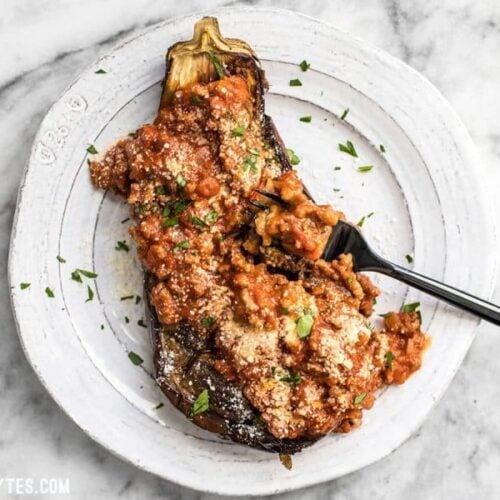 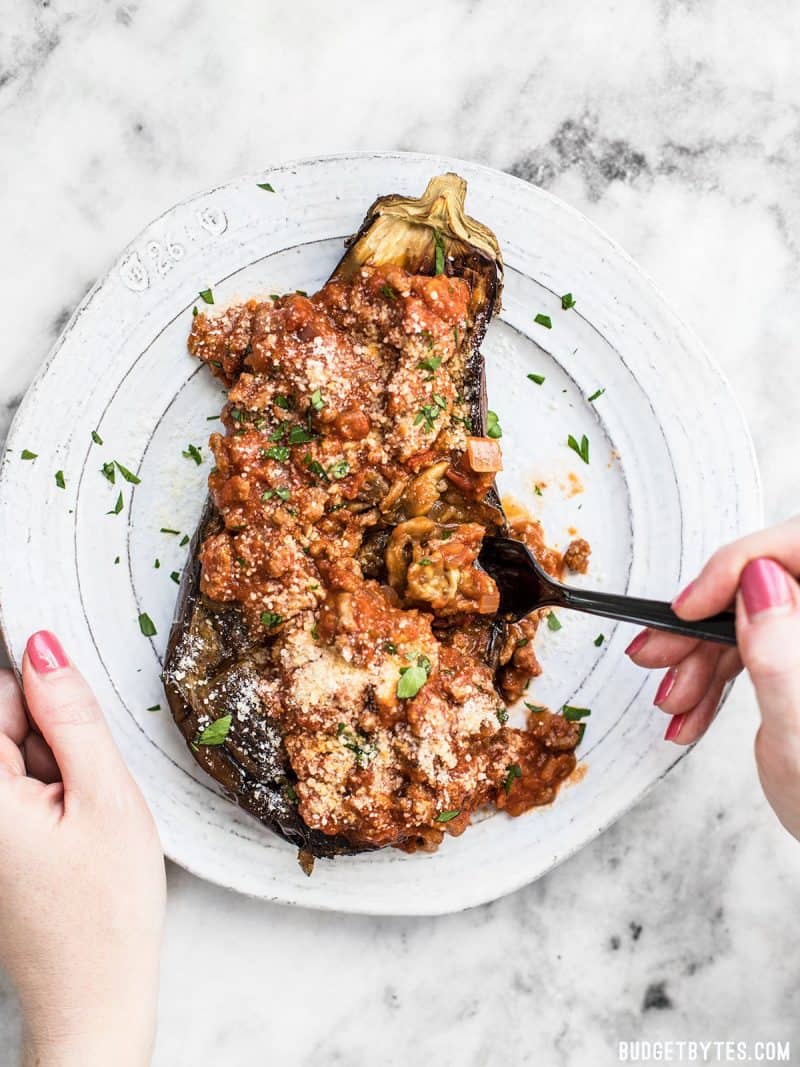 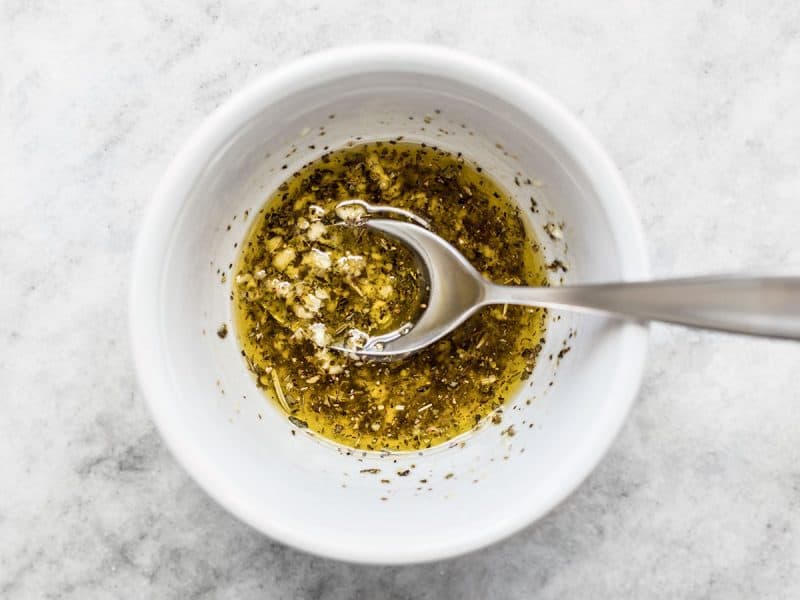 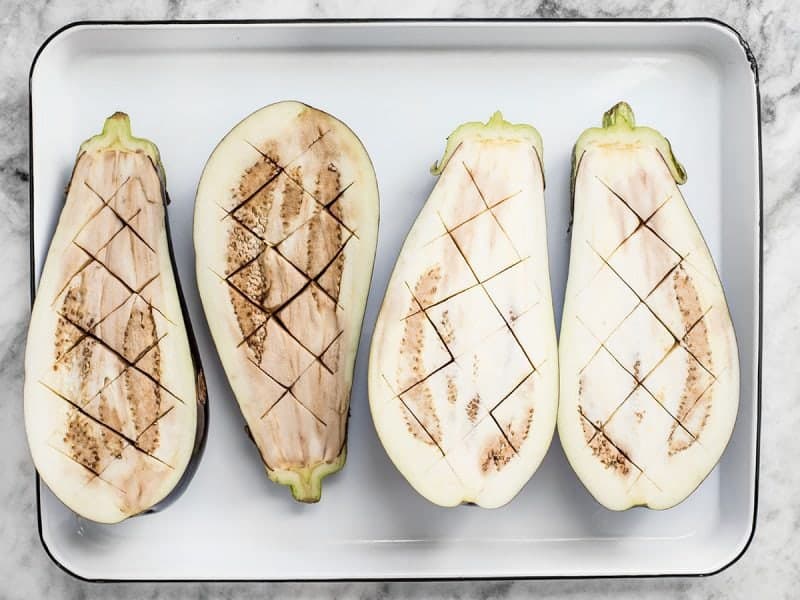 Slice two eggplant in half lengthwise, then score a crosshatch pattern into the flesh (avoid piercing the skin). Place the eggplant on a baking sheet, cut side up. 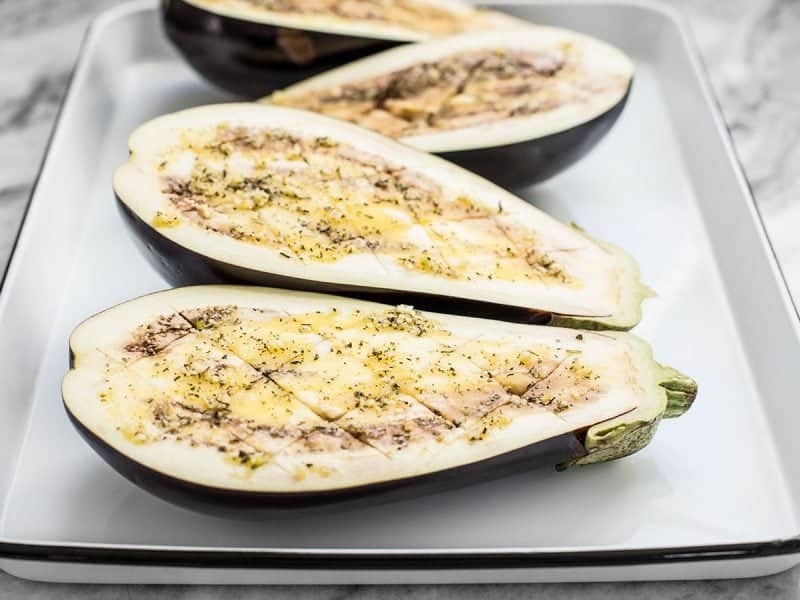 Drizzle the seasoned oil over the cut surface of the eggplant and smear it around with the back of a spoon. 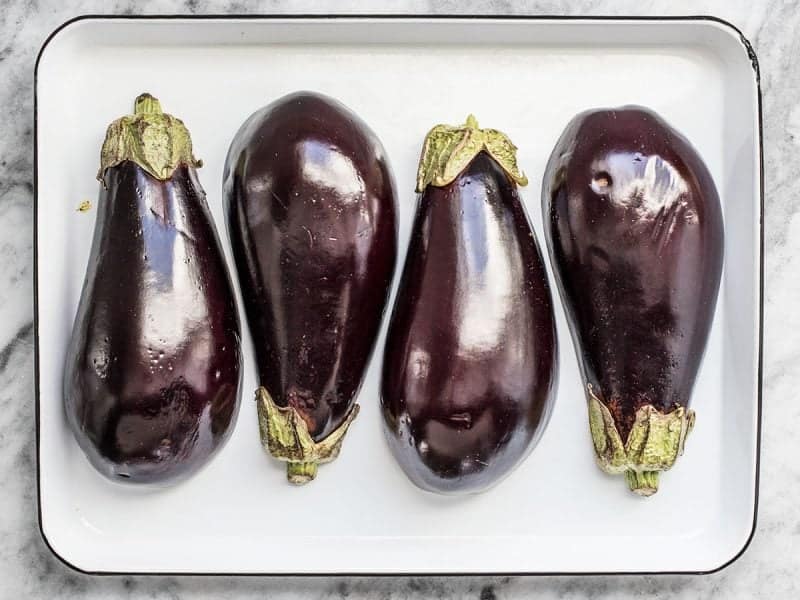 Flip the eggplant over so the cut side is down. This holds in the steam as they roast and helps soften the eggplant. A little non-stick spray on the baking sheet helps keep the eggplant from sticking and makes cleanup a little easier. Transfer the eggplant to the oven and roast for about an hour (total time will depend on the size and width of the eggplant). 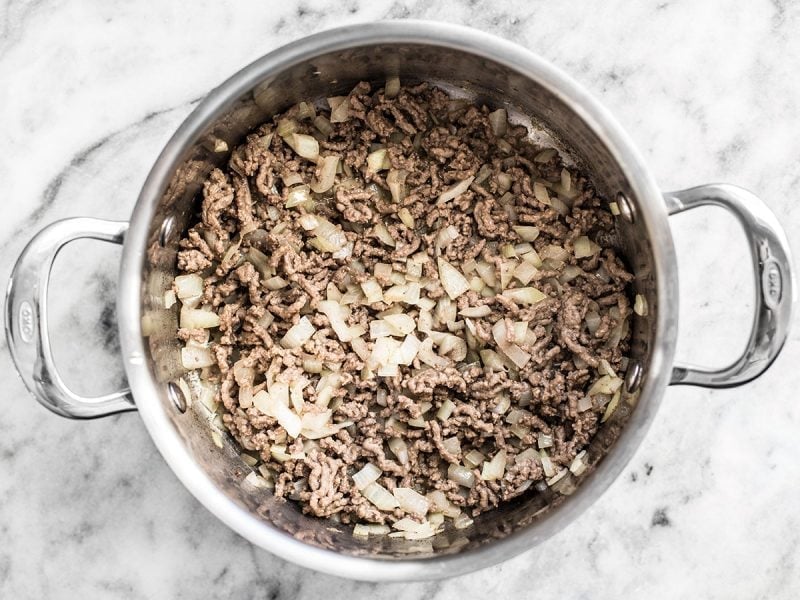 While the eggplant are roasting, begin the meat sauce. Add 1/2 lb. ground beef to a sauce pot with 1 Tbsp olive oil and sauté over medium heat until the beef is browned. If you’re using a higher fat content beef, drain off the excess fat, then add 1 small onion (diced) and 2 Tbsp butter. Continue to sauté until the onion is soft and transparent. 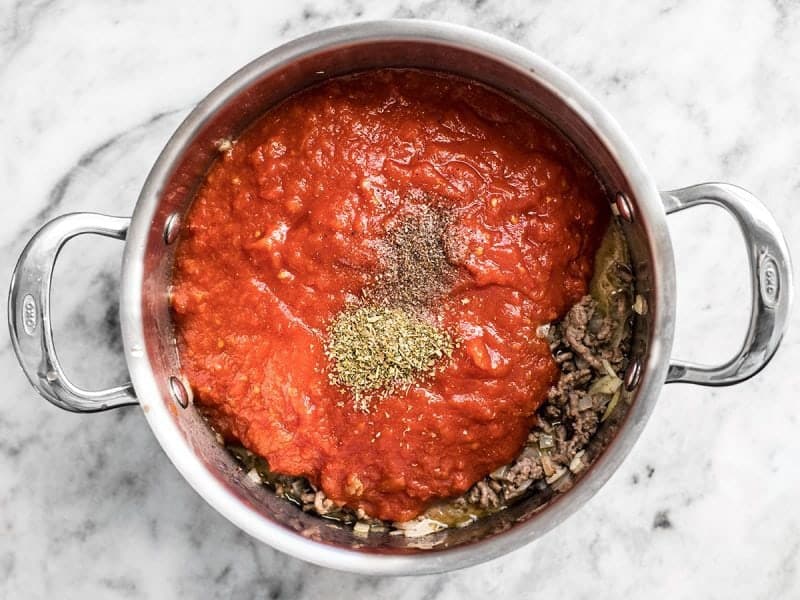 Once the onions are soft, add a 28oz. can crushed tomatoes, 1/2 tsp Italian seasoning blend, and some freshly cracked pepper. Stir to combine and allow the sauce to come up to a simmer. Once it reaches a simmer, turn the heat down to low and let it simmer over low for at least a half hour. The longer it simmers, the better it tastes, so I just let it go until the eggplant are done roasting. 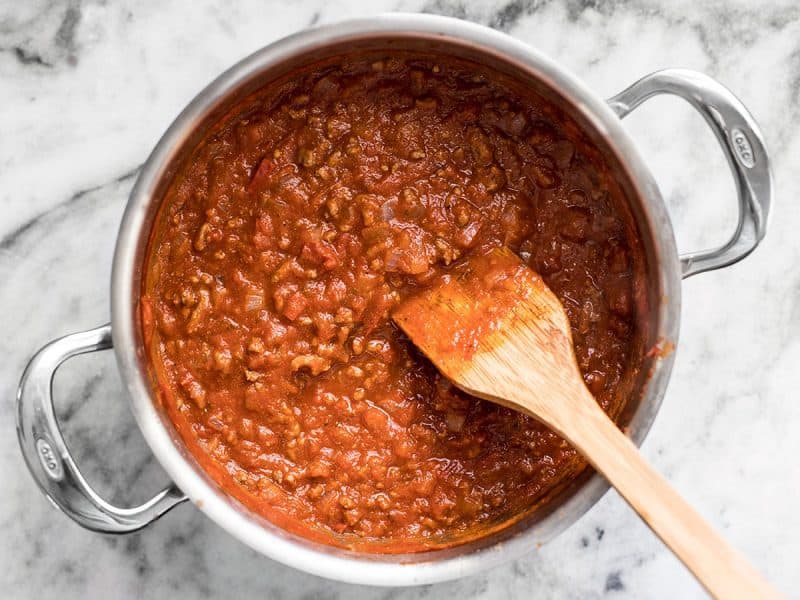 After the sauce has simmered and you’re just about to serve it, give it a taste and add salt as needed (I added about 1/2 tsp salt). 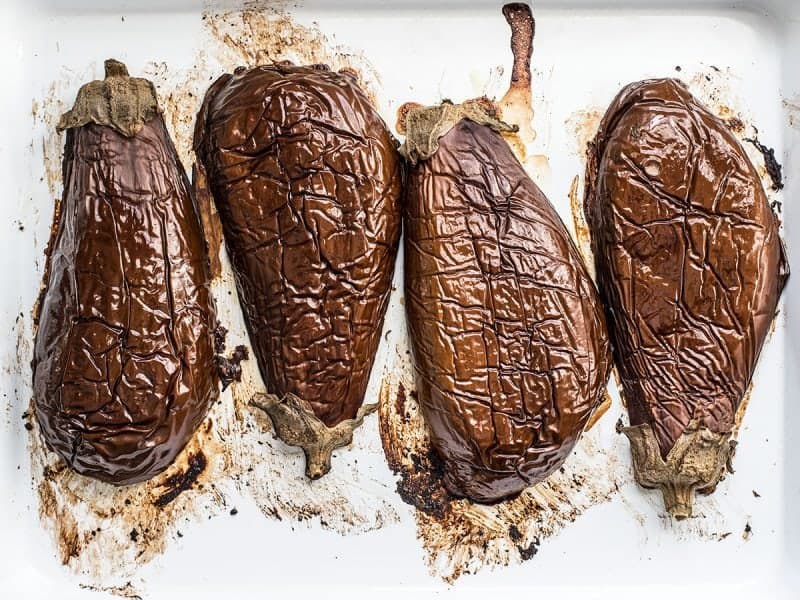 After about an hour, the eggplant should be soft and the skins should appear wrinkly. 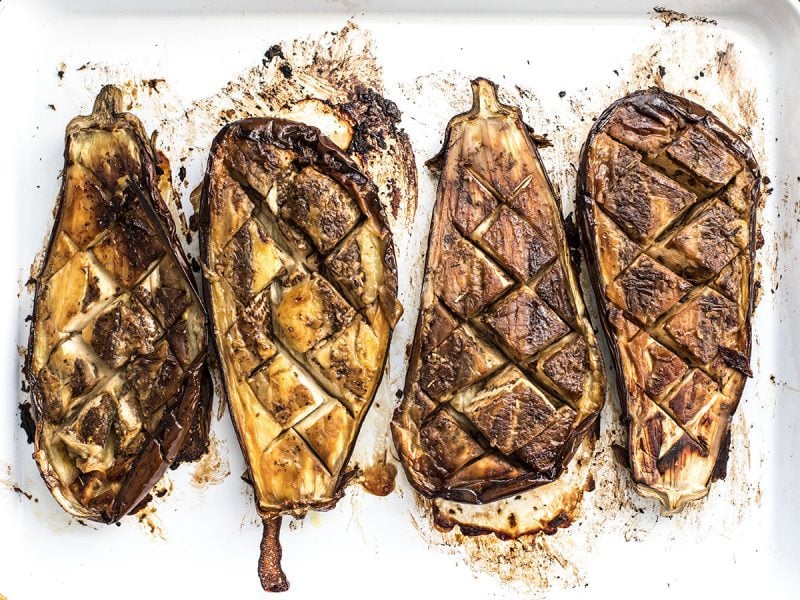 Carefully flip the eggplant (they’ll be quite soft and wobbly). Look at that beautiful caramelization! 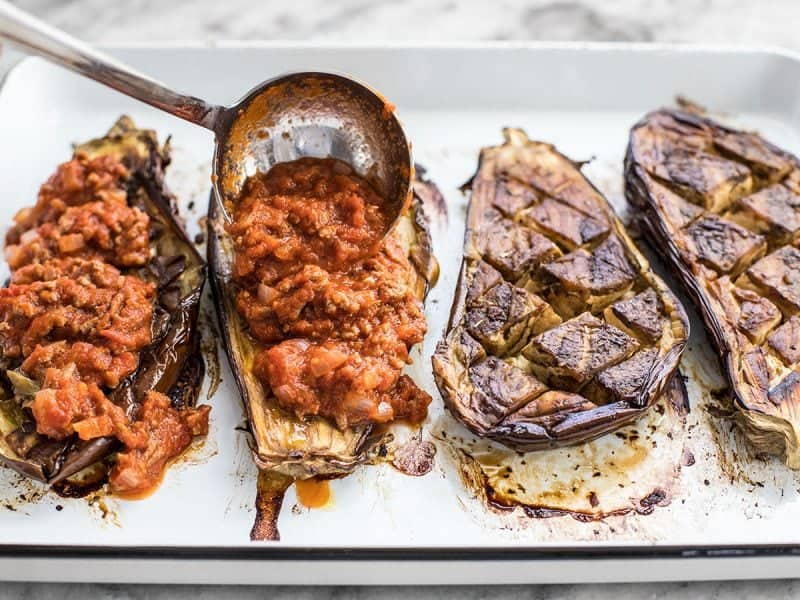 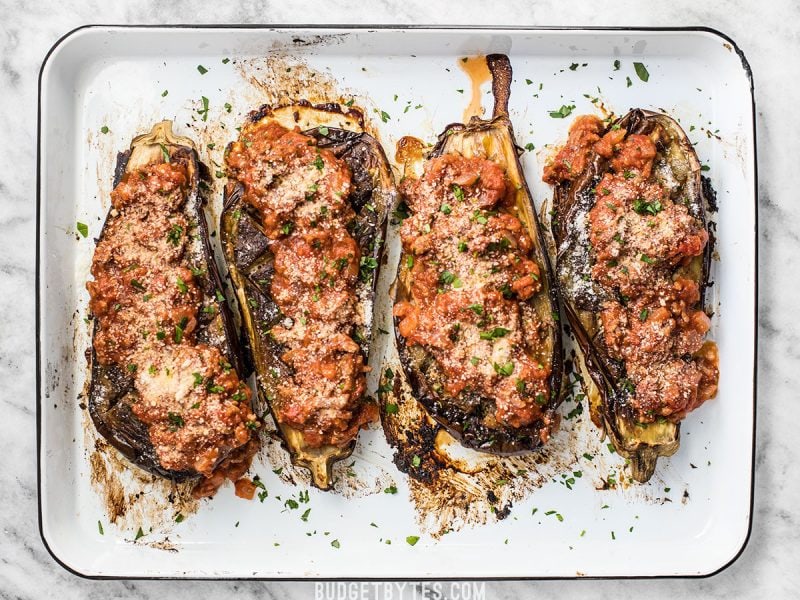 And then sprinkle with some grated Parmesan and serve! (I added a little chopped parsley, but only to give the photographs some color). 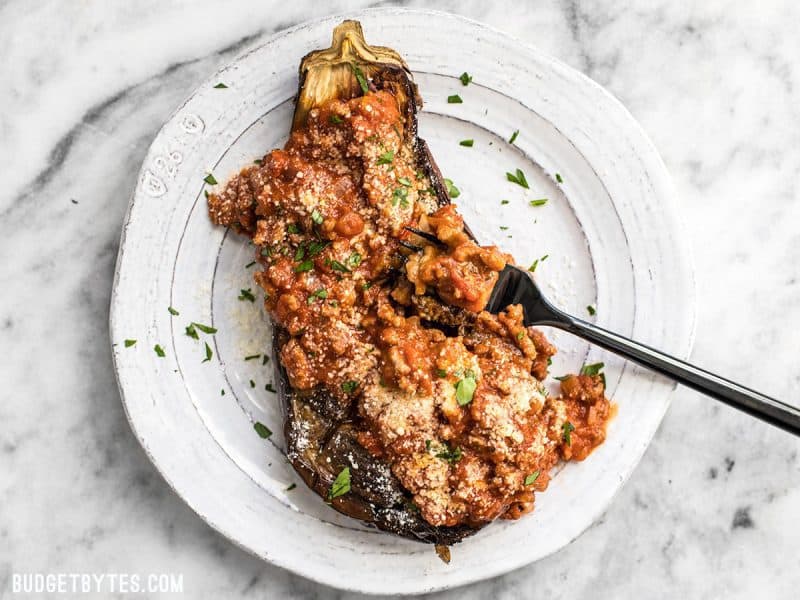 So yummy!! Pair the Roasted Eggplant with Meat sauce with a simple green salad and you’re all set! (Okay, maybe some garlic bread, too.)