For week 2 of my Vegetarian Challenge, I knew that I wanted a “refrigerator salad.” By that, I mean a salad that I can prepare at the beginning of the week and will hold up well in the refrigerator for several days. Building the salad on a base of cooked grains, using sturdy vegetables, and roasting the vegetables to remove some of their moisture helps this Roasted Cauliflower and Quinoa Salad stay fresh like the day you made it, well into the week. I’ve also tested freezing this salad and it freezes SO WELL! Almost unnoticeable changes once reheated. 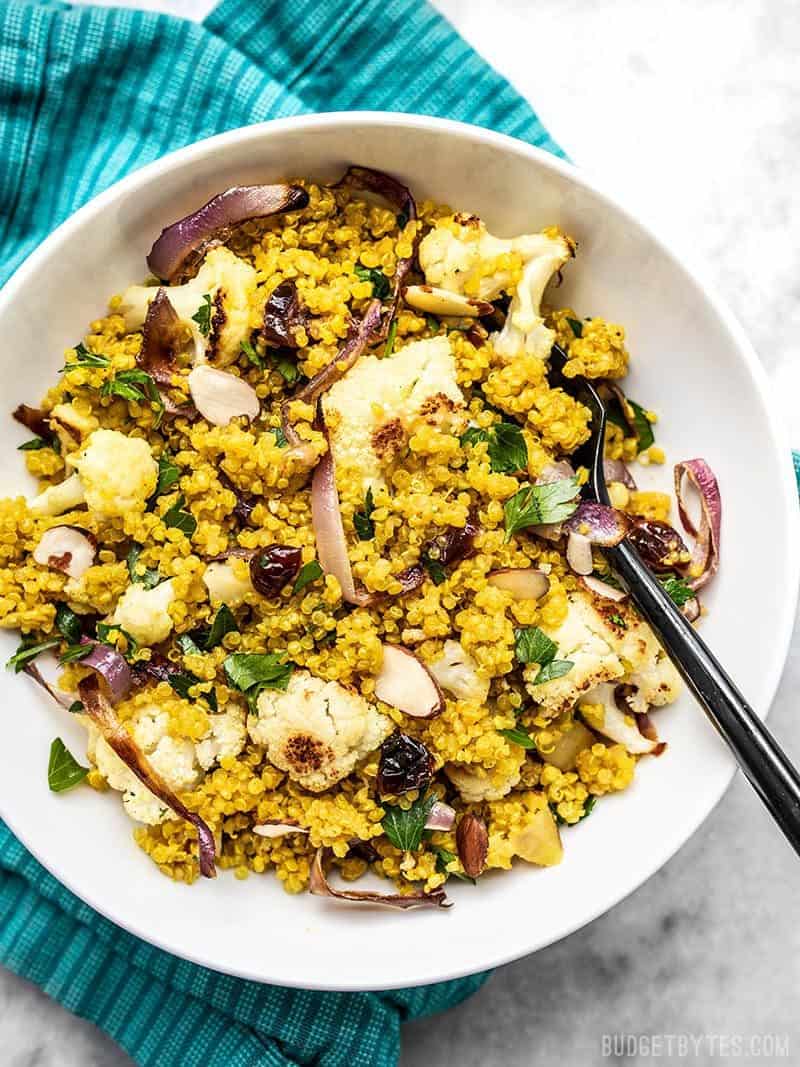 This recipe was inspired by two of my favorite recipes, Yellow Jasmine Rice and my classic Roasted Cauliflower Salad, so if you’re a fan of either of those, you’re going to love this one as well. I didn’t make a dressing for this salad, because there was already so much flavor going and it was moist enough for my liking, but if you want to try a dressing, I would suggest either the Lemon Turmeric Dressing from my Autumn Quinoa Salad, or the Lemon Tahini Dressing from my other Roasted Cauliflower Salad.

You have several options with this salad. If you want to cut costs even more, you can substitute couscous for the quinoa. Just make sure to use proper amount of liquid, as suggested by the cooking instructions on the package of couscous. Raisins make a great substitution for the dried cranberries, and you can probably use a handful or two of kale, chopped very fine, in place of the parsley. I sometimes have success with spinach holding up in salads like this, so long as the other ingredients are significantly cooled before combining with the spinach. 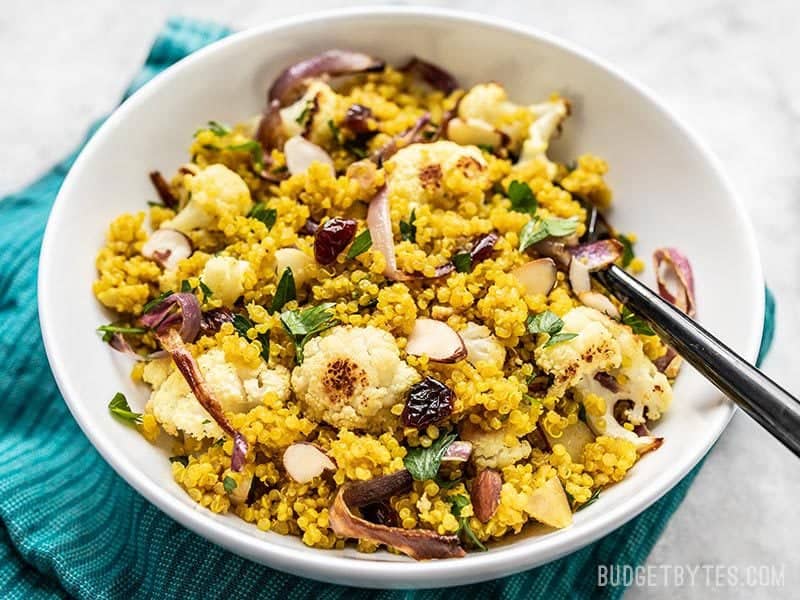 4.92 from 37 votes
This Roasted Cauliflower and Quinoa Salad holds up well in the refrigerator for days, making it perfect for meal prep or brown bagging your lunch.
Author: Beth - Budget Bytes 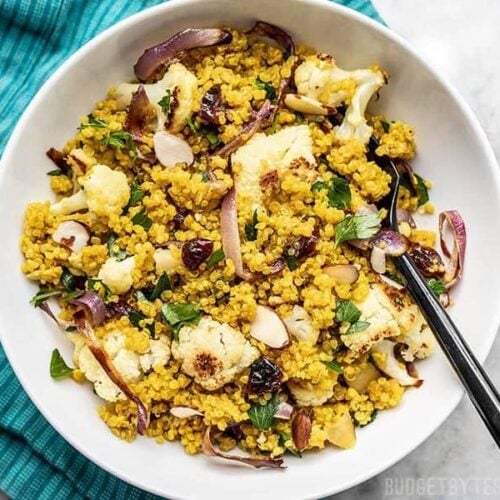 *I use Better Than Bouillon base to make my broth. 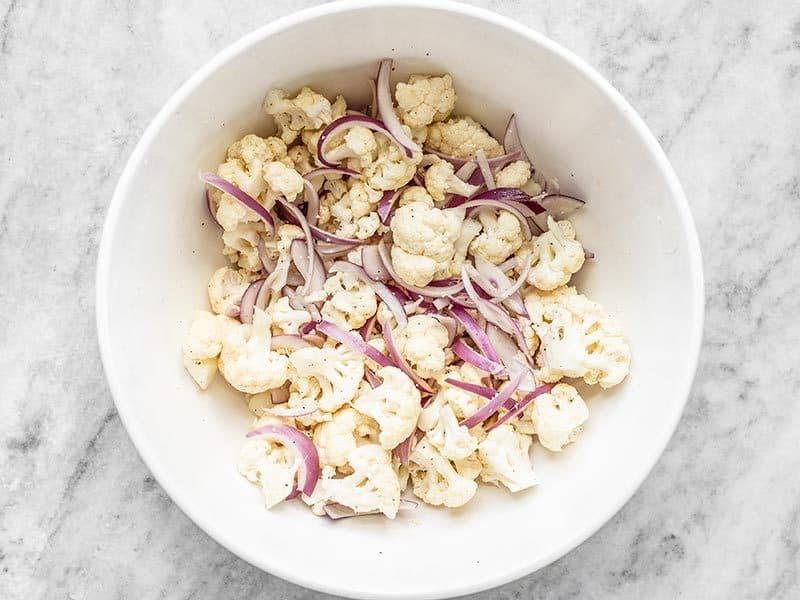 Begin by preheating the oven to 400ºF. Chop one head of cauliflower into florets and slice one small onion into 1/4-inch strips. Place both of them in a bowl and add 2 Tbsp olive oil and a pinch of salt and pepper. Toss the cauliflower and onion until they are well coated in oil. 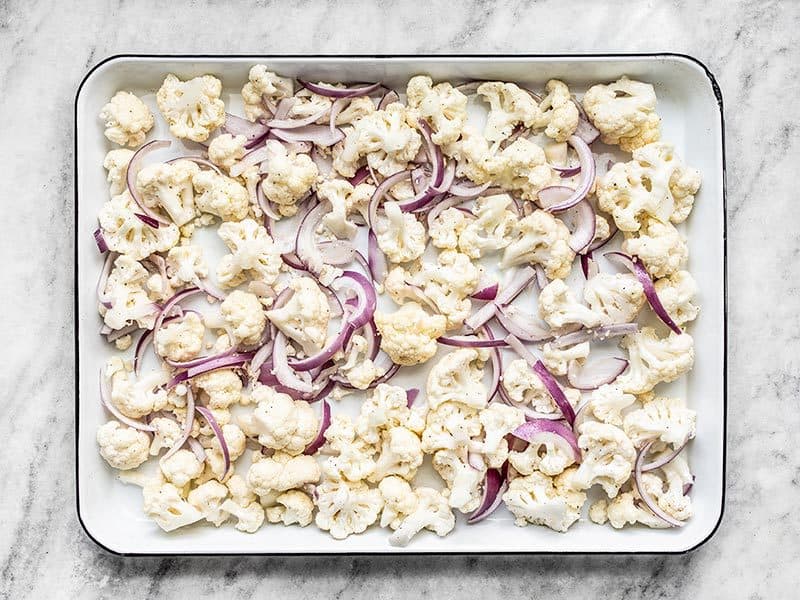 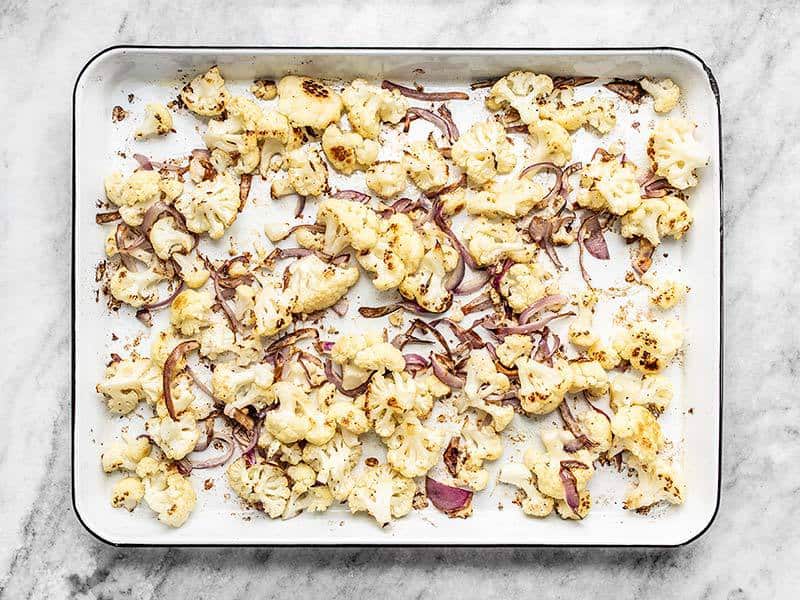 Roast for an additional 10-15 minutes, or until the onions are caramelized and the cauliflower florets are browned. 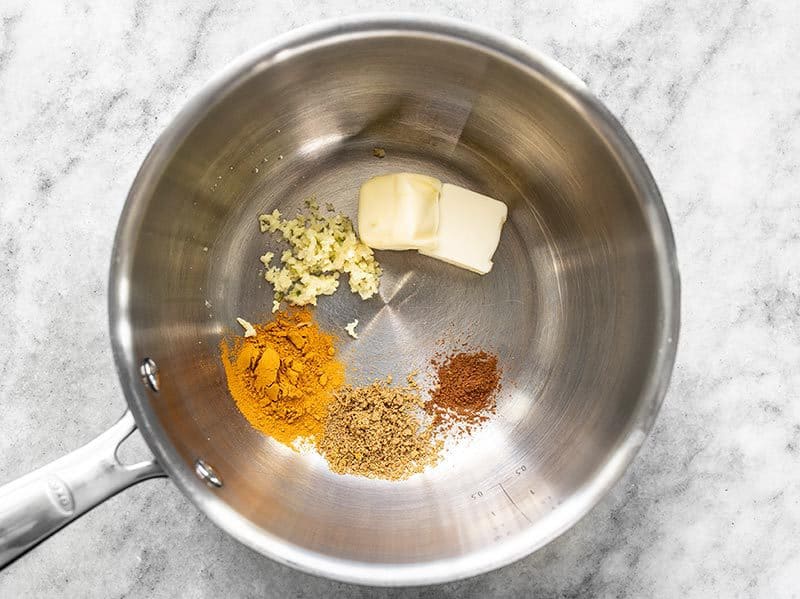 While the cauliflower is roasting, begin the quinoa. Rinse 2 cups of quinoa in a wire mesh sieve. Add 2 Tbsp butter, 2 cloves of minced garlic, 1 tsp turmeric, 1/2 tsp cumin, and 1/8 tsp cinnamon to a medium sauce pot. Stir and cook the spices in the butter over medium heat for about one minute. 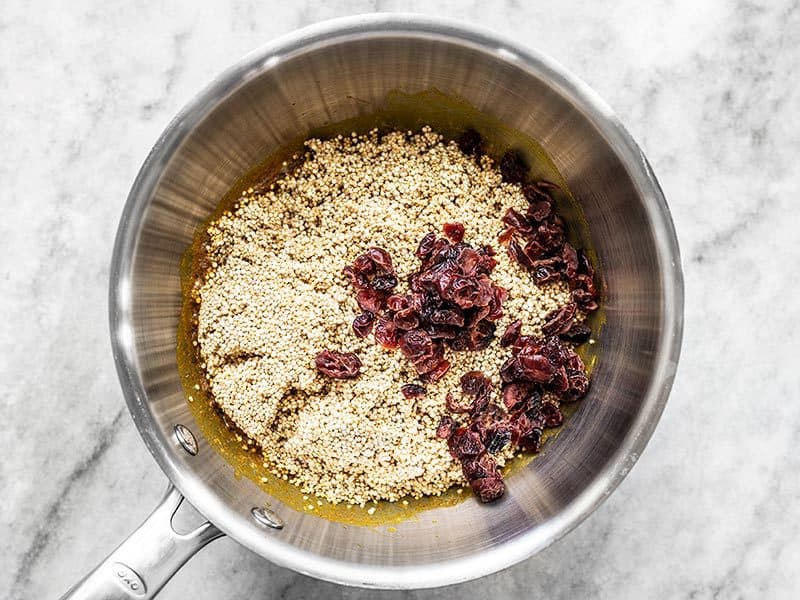 Add the rinsed quinoa to the pot, along with 1/3 cup dried cranberries. We’ll cook the cranberries with the quinoa so they can plump up in the hot liquid. 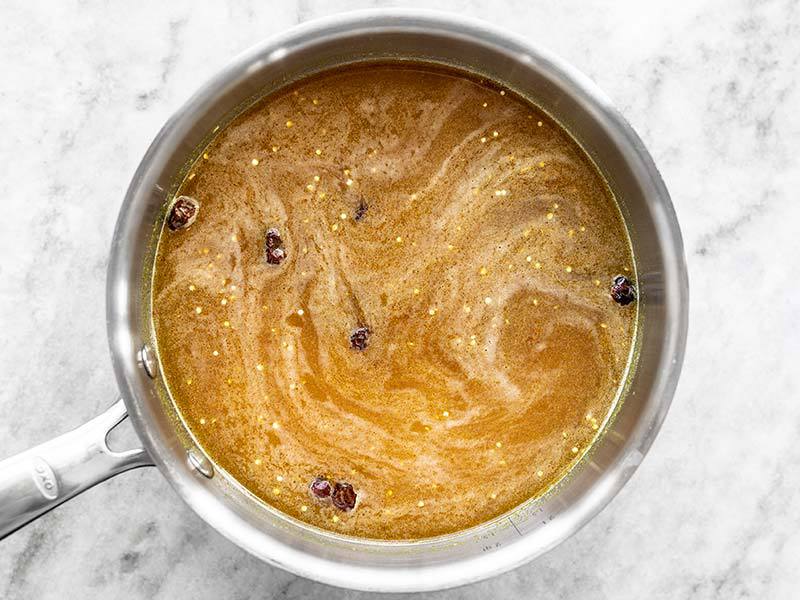 Finally, add 3 cups vegetable broth to the pot and give everything a brief stir to combine. Place a lid on the pot, turn the heat up to medium-high, and bring it up to a boil. Once it reaches a boil, turn the heat down to low and let it simmer for 20 minutes (with the lid on). 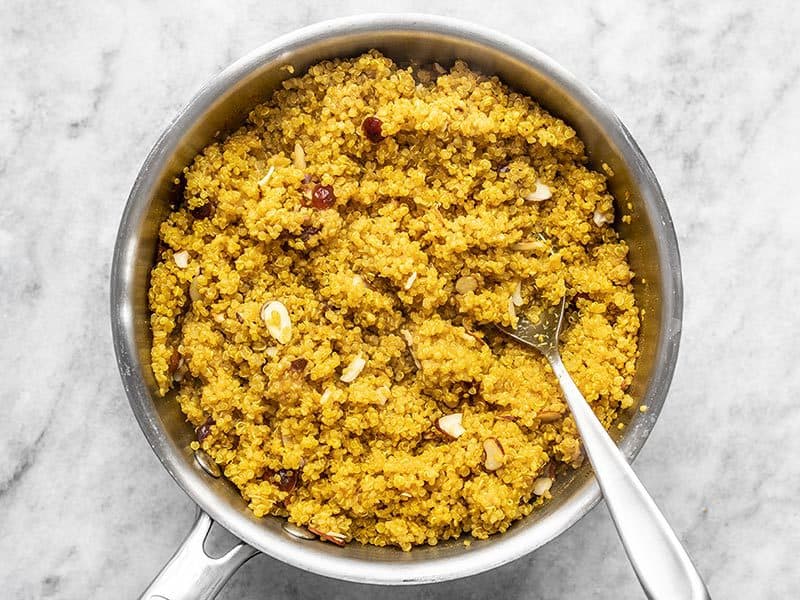 After 20 minutes, all of the broth should have been absorbed. Fluff the quinoa, add 1/4 cup sliced almonds, and stir to combine. Let the quinoa cool slightly. 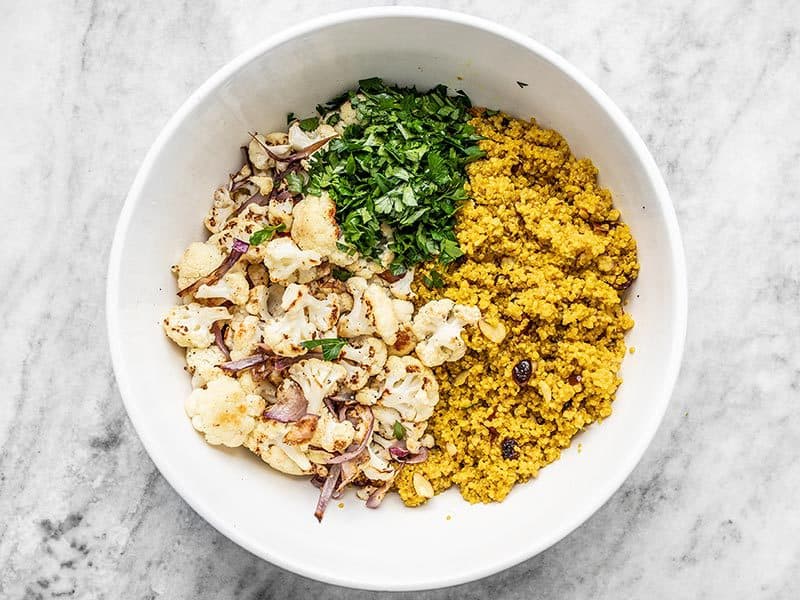 Add the cooked quinoa to a large bowl along with the roasted cauliflower and red onion, and 1 cup of chopped parsley. 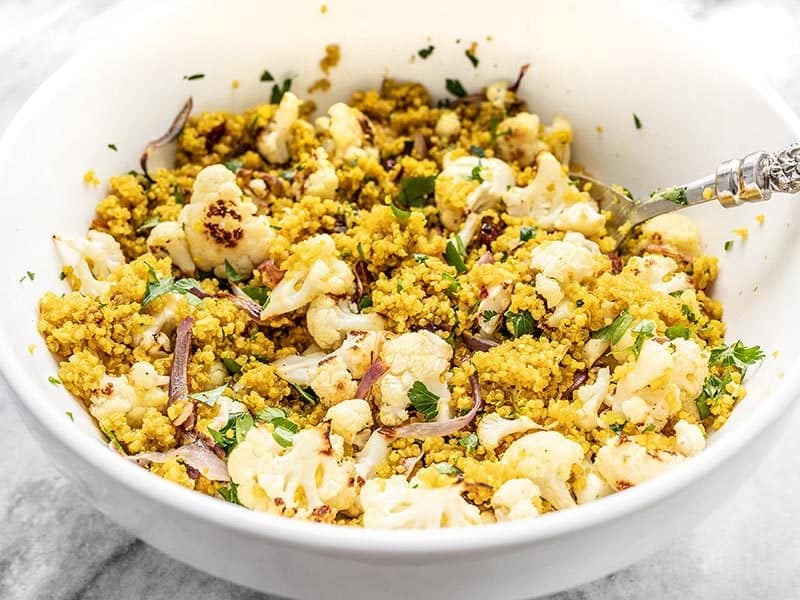 Stir everything to combine, then it’s ready to serve! You can serve this salad warm, or refrigerate it for later and serve it cold. 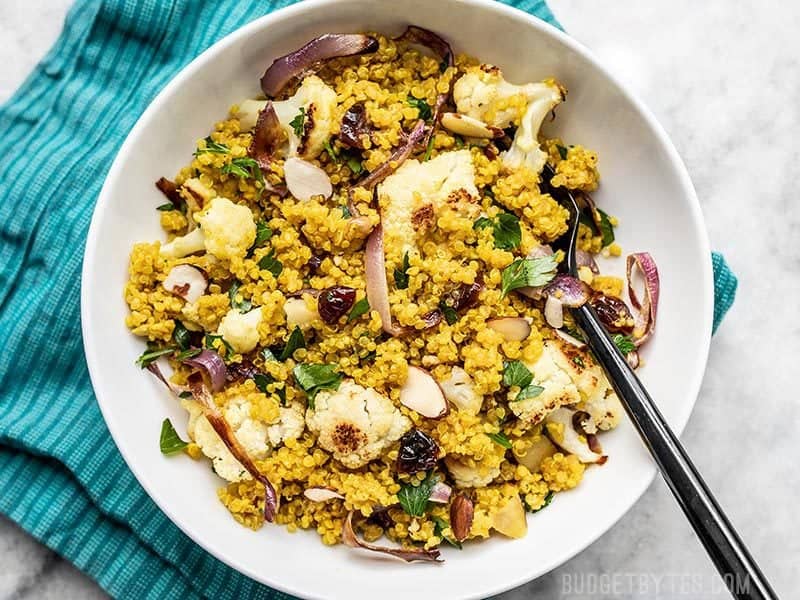 Crunchy, earthy, and a little sweet, this Roasted Cauliflower and Quinoa Salad will fill you up and keep you full!