I apologize ahead of time for showing the easiest and probably the most decadent dessert ever. These Peanut Butter Fluff Cups are a smaller batch version of the popular no-bake peanut butter pies. It’s basically like a peanut butter flavored no-bake cheesecake, with a little whipped cream on top and crushed chocolate grahams in place of an actual crust. Basically, it’s DANGEROUS. 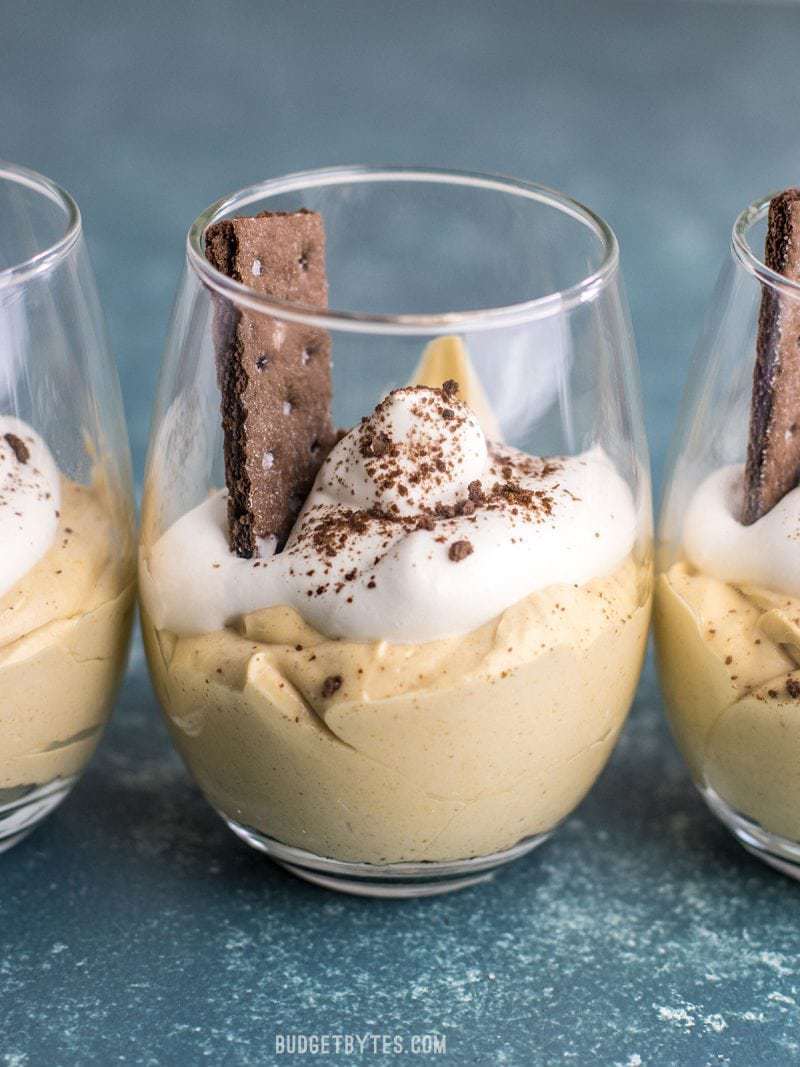 You could probably scale this recipe down even further to make just two servings, provided you have bowls small enough that allow you to whip the ingredients together (if they’re too shallow in a larger bowl you won’t be able to whip them together). BUT, these guys hold up really well in the fridge, so might as well make four, right? Right.

I won’t keep you from bliss any longer…

4.63 from 16 votes
Peanut Butter Fluff Cups are the easiest and most decadent dessert you’ve ever made. They come together in minutes with no baking required! 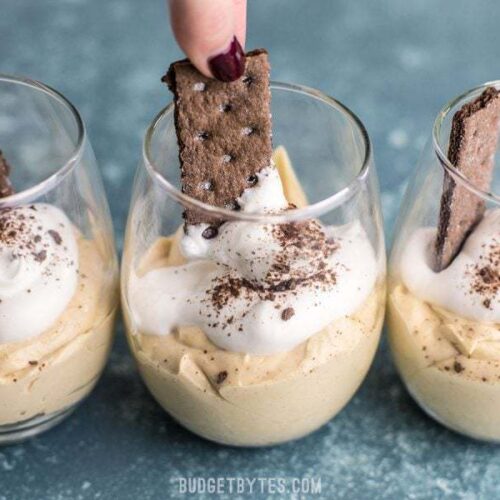 If preferred, you can use an 8oz. tub of pre-made whipped cream instead of making your own.

Love peanut butter and chocolate? Check out my No-Bake Pretzel Peanut Butter Bars and “The One” Chocolate Mug Cake. 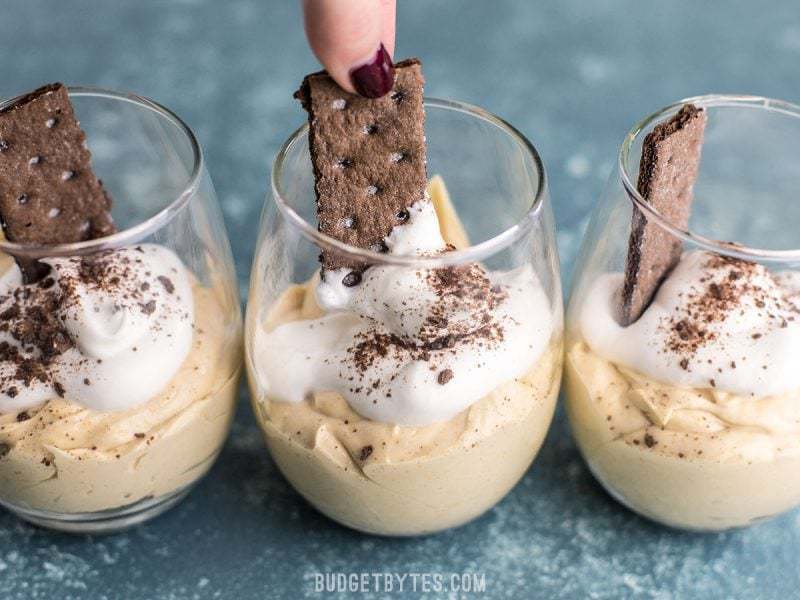 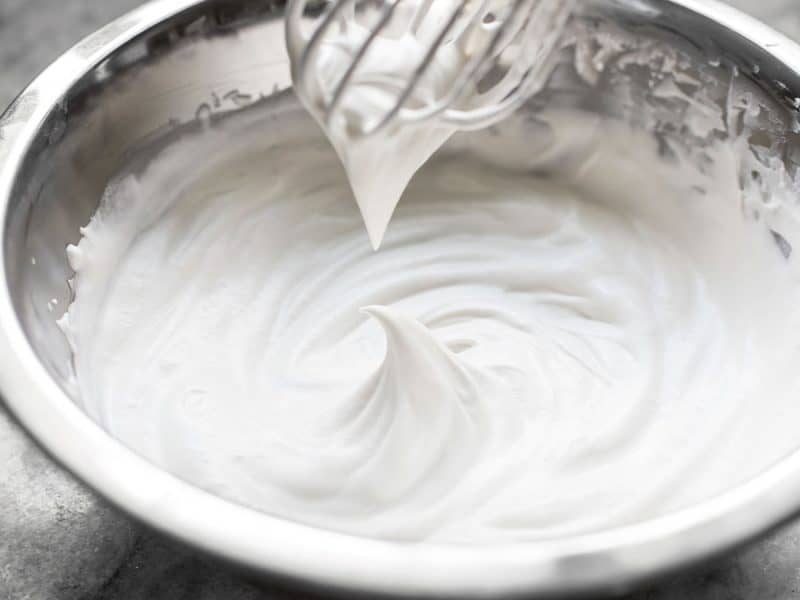 Start by making the vanilla whipped cream. Homemade whipped cream couldn’t be any easier, especially if you are using a mixer (doing it by hand does take a little elbow grease, but that’s how I always do it!). Place 1 cup heavy whipping cream in a bowl along with 2 Tbsp granulated sugar and 1 tsp vanilla extract. Whip or beat with a mixer until soft peaks form. Soft peaks are when you lift the whisk out of the whipped cream it creates a peak that gently slumps over to the side, like in the photo above. Set the whipped cream aside. 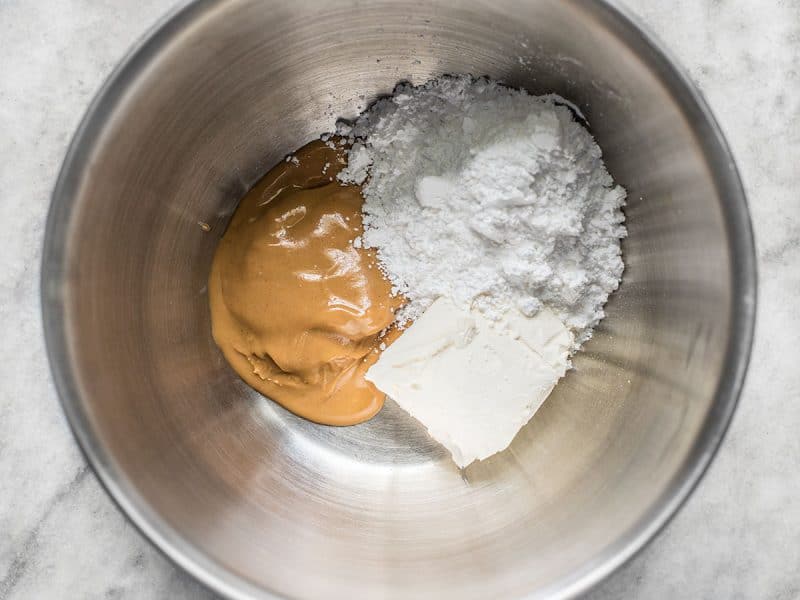 Next, add 1/2 cup peanut butter (creamy), 4 oz. cream cheese, 3/4 cup powdered sugar, and 1/4 cup milk (not pictured) to a separate bowl. Use a mixer to whip the ingredients together until smooth and creamy. Start with low power to prevent the powdered sugar from spraying into the air, then increase to medium once it has incorporated. 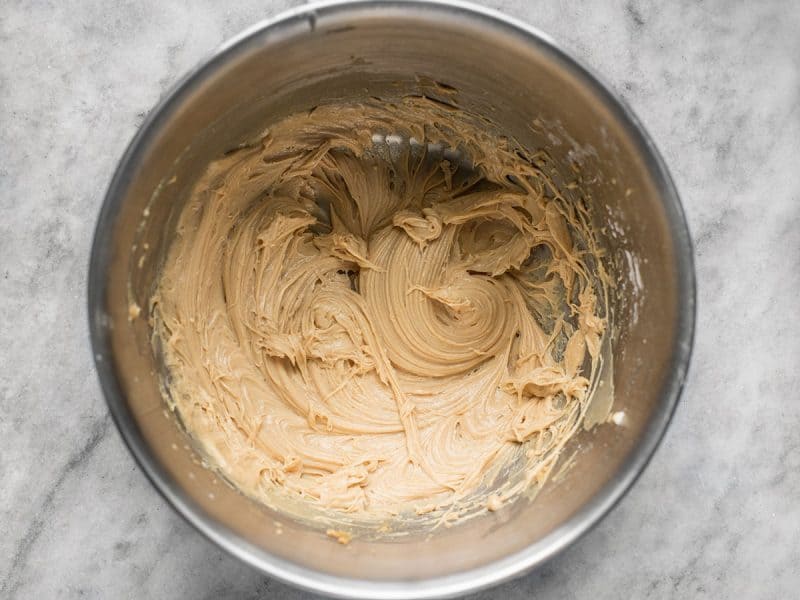 This is what it should look like once whipped. It’s light and creamy, but still quite thick, so we’ll use some of that whipped cream to lighten it up… 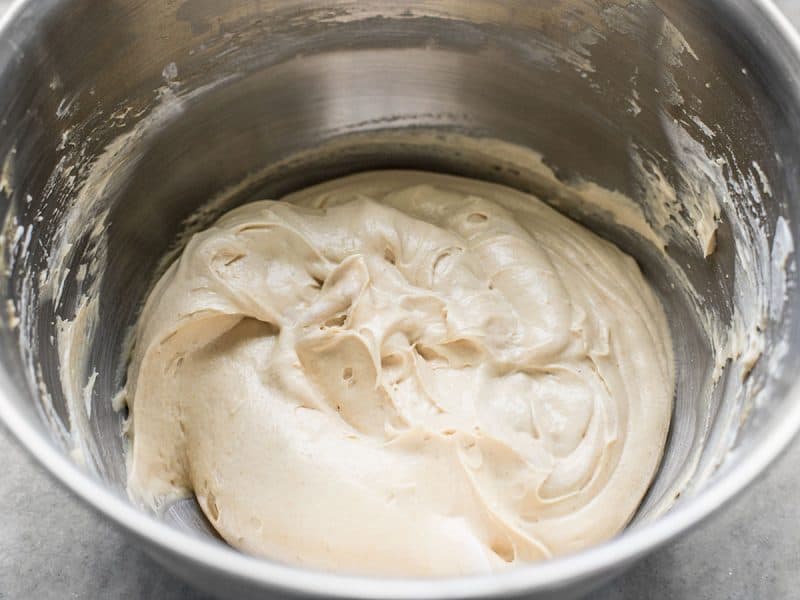 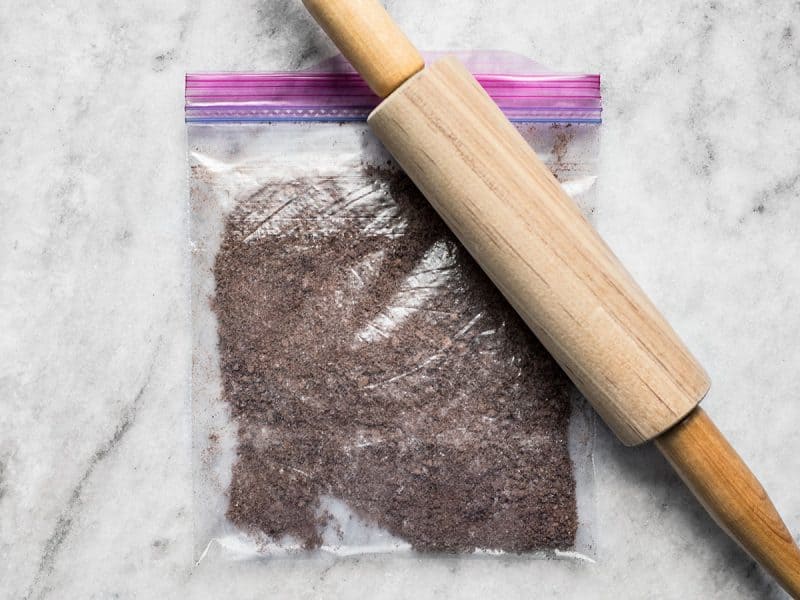 Add 3 of the 4 chocolate graham crackers to a zip top bag and crush them with a rolling pin (or you can use a food processor and pulse until they are crumbs). 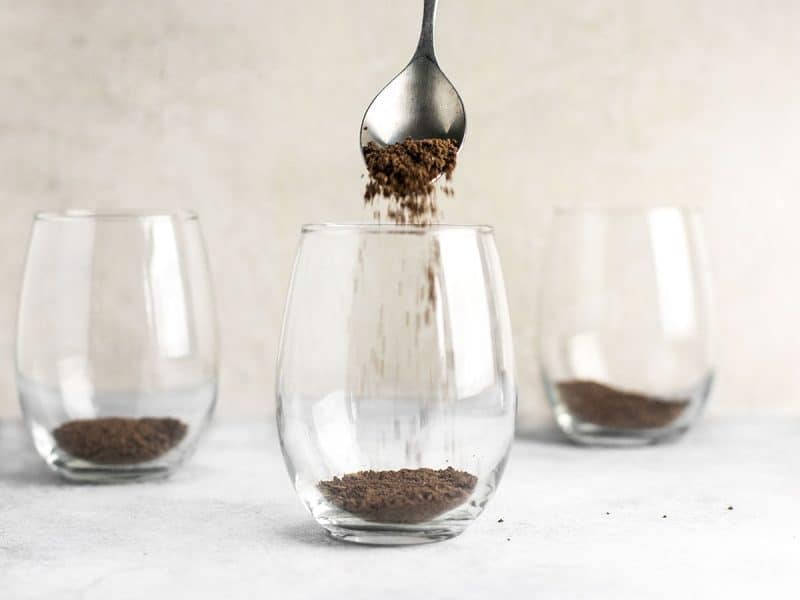 Divide the crushed graham crackers between four cups or containers (I had four, one is just out of the frame). Save just a little of the crumbs to sprinkle over top when they’re done. 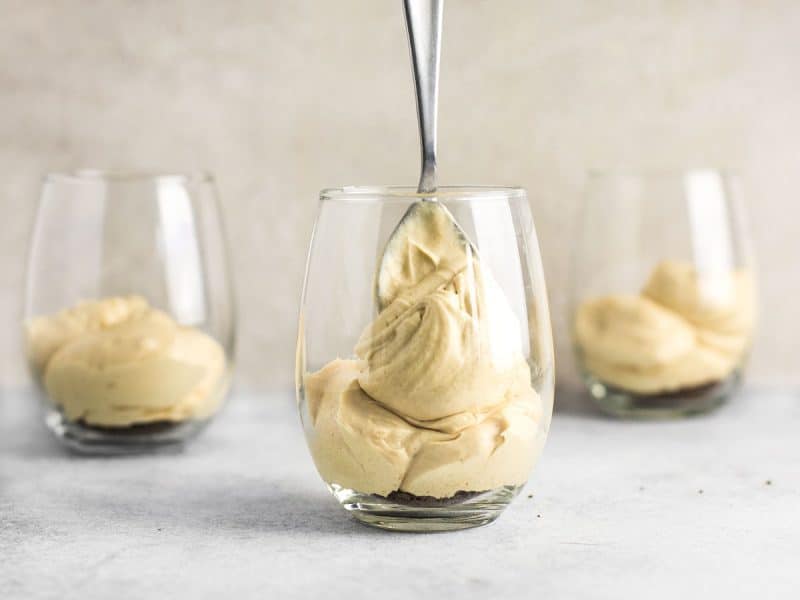 Next, divide the peanut butter fluff between the containers… 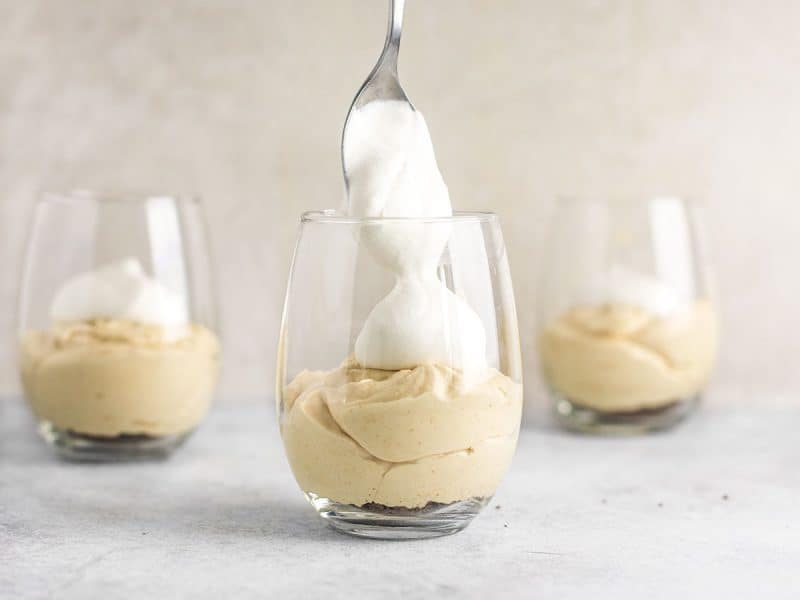 And then add the rest of the whipped cream on top of each. MMMmmmm 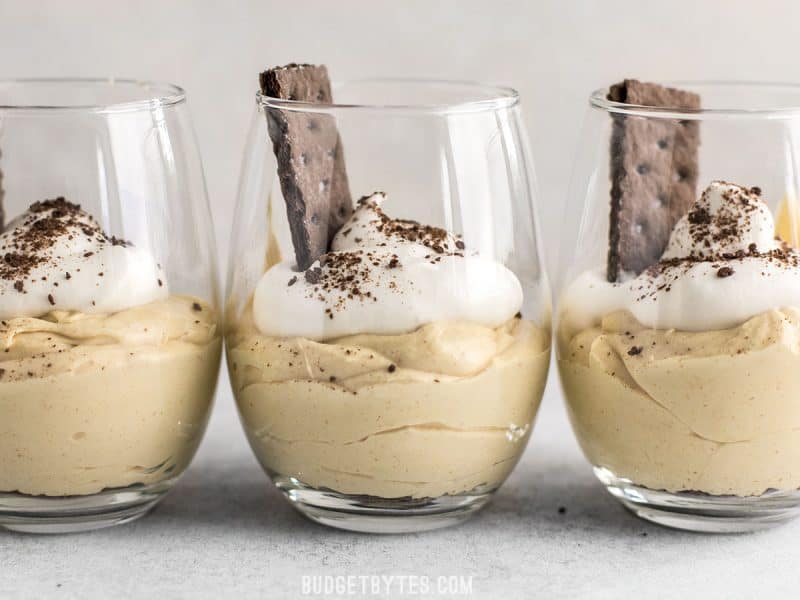 And then to garnish, sprinkle a pinch of the graham cracker crumbs on top of each, then break the last graham cracker into four pieces and stick one piece down into each cup. 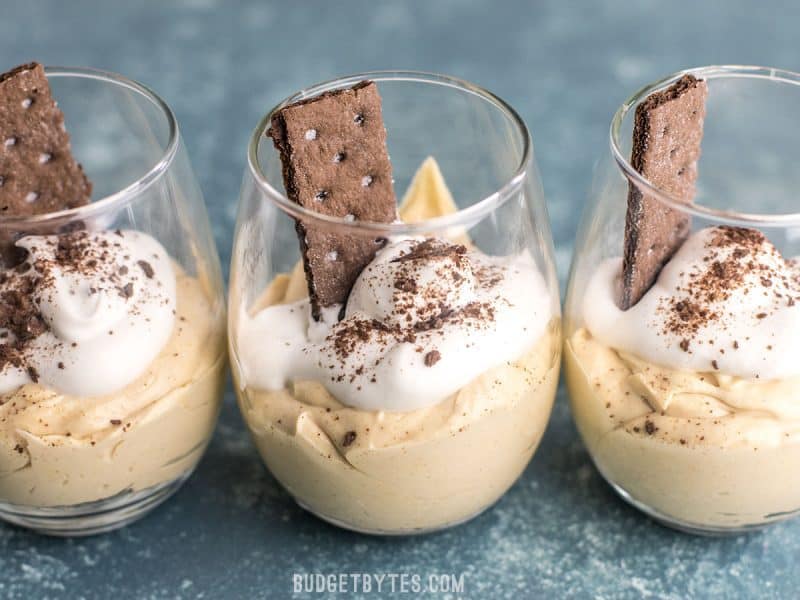 And that’s it! You can eat the Peanut Butter Fluff Cups right away, or refrigerate until later. I had one the next day and I have to say I think I like them refrigerated better! They firm up to a cheesecake-like texture and are just to-die-for. I even like how the graham cracker crumbs get a little moist. 🤷‍♀️ What’s not to love, though.