This recipe comes courtesy of my dear friend, Ashley. She was looking for something to cook for dinner one night and decided to type the ingredients she had on hand into google (I think it was google) and Joe’s Special popped up.

Joe’s Special is a recipe created and made famous by a San Francisco restaurant, which basically consists of ground beef, spinach, and eggs. There have been hundreds of variations since, and this is one of them. What makes this version mine? Well, just that I added what I had in my fridge. Primarily feta cheese, which happens to go right along with the spinach and oregano already in the basic recipe. If you don’t have feta, no worries, just use parmesan alone and it will still be delish.

I listed the serving size for this recipe as just one cup. Sure, that’s kind of small, but I really see this dish as just one part of a breakfast (or lunch, or dinner). Serve it open face over whole grain toast, stuffed inside a pita, and with a piece of fresh fruit on the side for a well rounded meal. 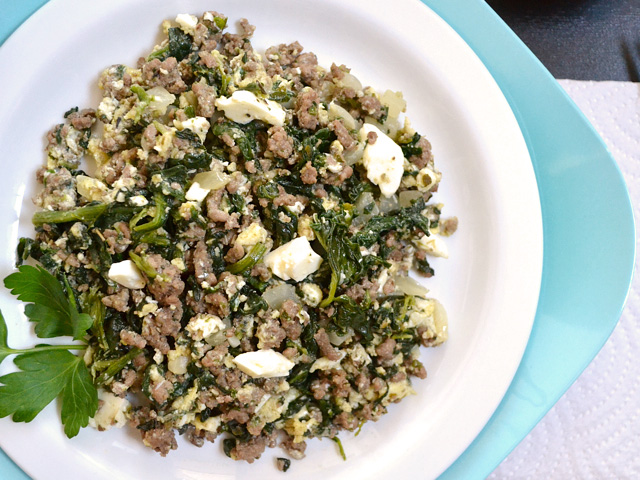 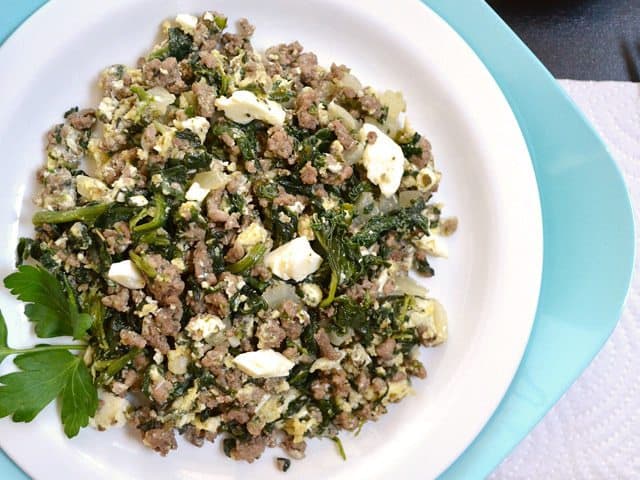 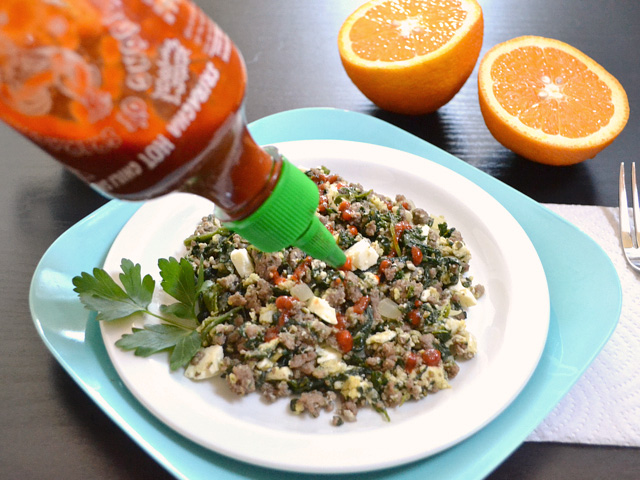 Sriracha – because that’s how I roll. What did you expect? 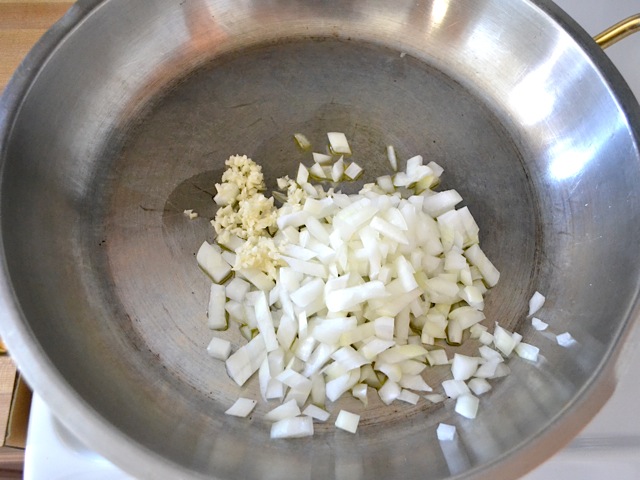 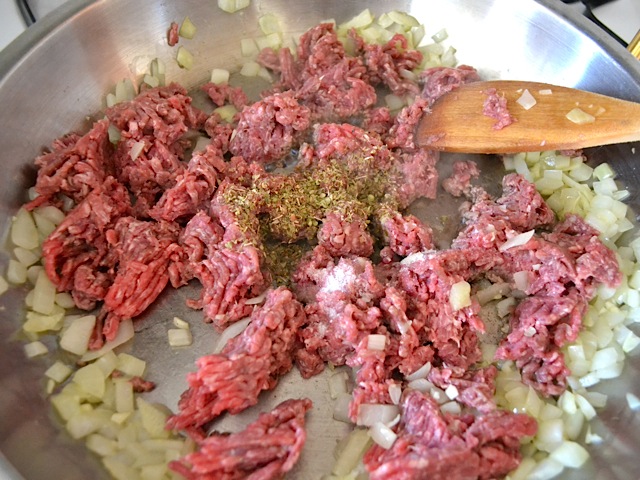 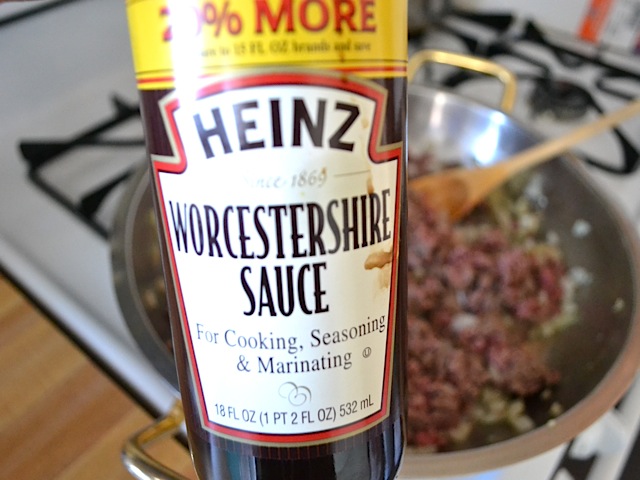 Also add the Worcestershire sauce, which gives the dish some extra savory oomph and just a touch of sweetness. Cook until the beef is fully browned. 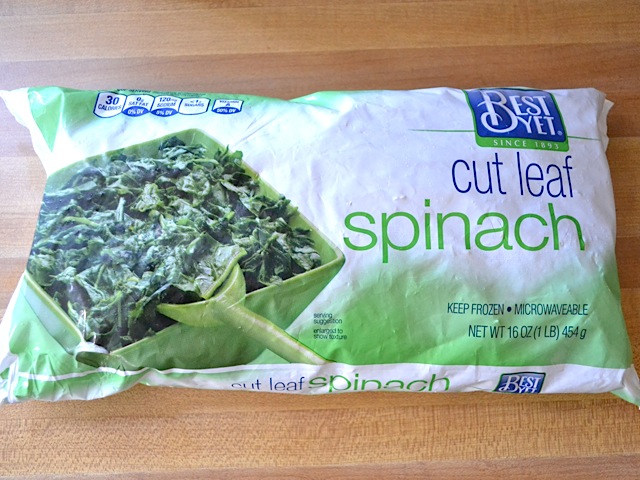 I tend to like the frozen spinach in a bag rather than the block because I think it has a better texture, but you could certainly use the block kind if you need. Just make sure that it’s CHOPPED spinach, so that you don’t have long stringy pieces. I used a half pound (8 ounces), but if you want to use a whole 10 ounce block, that would work just fine. 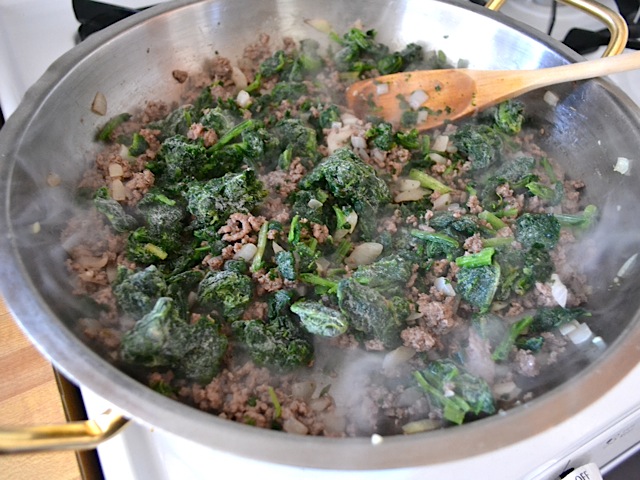 Once the beef is fully cooked, add the spinach. Keep cooking until the spinach thaws and then fully heats through. 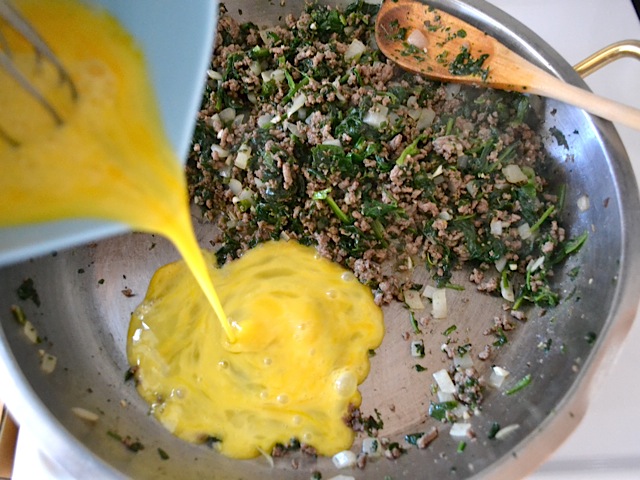 While the spinach is cooking, lightly whisk the eggs. I don’t like to whisk until completely smooth because I like some separation of white and yolk, but that’s just me. Push the beef mixture to the side and pour in the eggs. Cook the eggs without mixing them in with the beef. Only combine the two sides once the eggs have cooked, otherwise, you’ll just coat the beef in eggs and you won’t have any egg clumps. If your pan has a thin bottom or doesn’t heat evenly, you can do this in the center of the pan (right over the heat) instead of on the side. Just push the beef out to the edges. 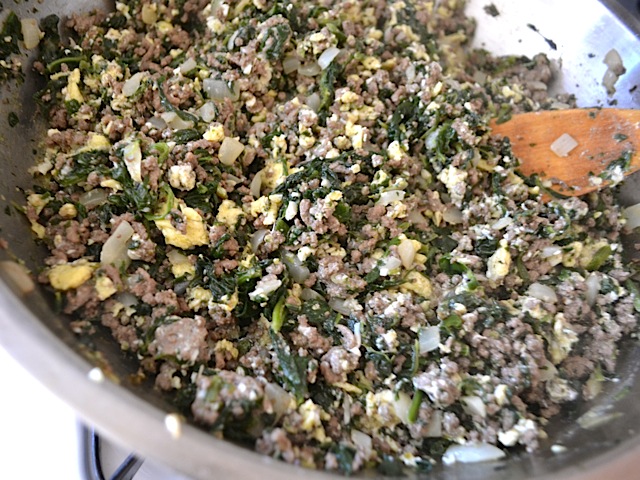 Once the egg is cooked, stir it into the beef and turn off the burner. If you want even BIGGER clumps of egg, scramble them in a separate skillet then stir them in. 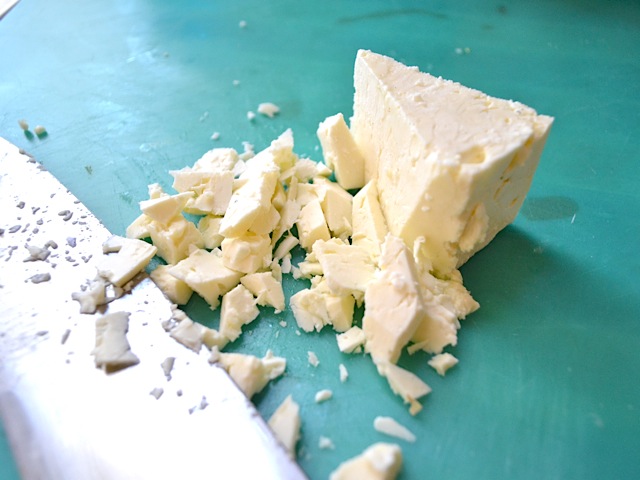 Roughly chop the feta or crumble it with your hands. If you’re using just parmesan, increase the amount to 1/4 cup instead of just 2 tablespoons. 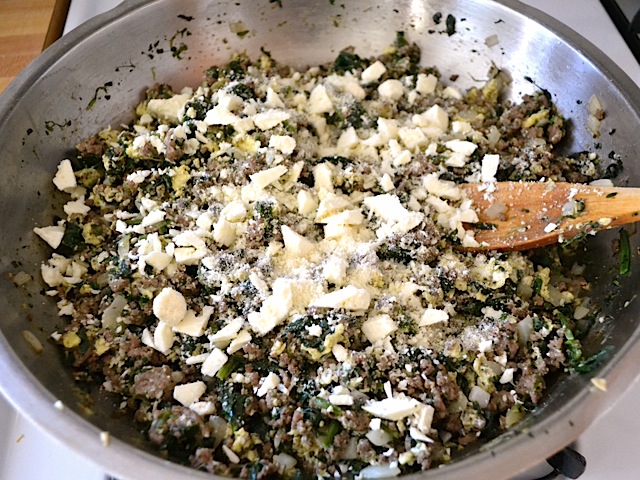 Add the cheeses to the skillet. Stir it all together, taste it, and adjust the salt if needed. The amount and type of cheese that you use will dictate how much salt is needed. 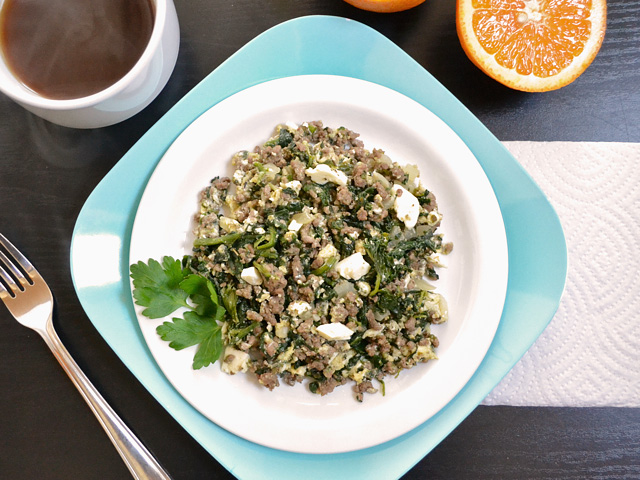 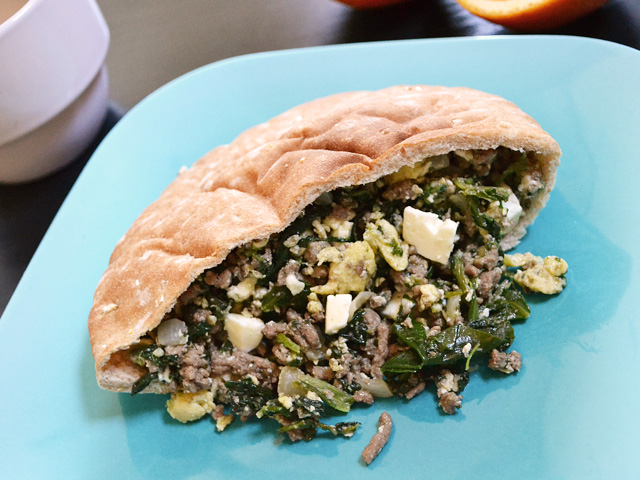 Stuff it inside of a pita or serve over a slice of hearty toast. I have to admit, a tomato would be AWESOME with this!