Cranberries are the new pumpkin. I want fresh cranberries in everything lately. I had half of a bag of cranberries stashed in the freezer and almost made a second batch of Cranberry Apple Baked Oatmeal, but then I decided I wanted something a little sweeter. So I threw together this super festive and visually stunning Cranberry Almond Cake.

The concept is super simple, almond flavored white cake topped with fresh cranberries and almonds, but the flavor and presentation are nothing short of elegant. If you’ve never made a cake from scratch (in other words, not from a box), you might be surprised at just how easy it is. It literally took minutes. You don’t have to be “good” at baking to make this Cranberry Almond Cake, although you’ll probably want at least a basic hand mixer to help you get the light, fluffy texture going.

If you’re in charge of dessert for Thanksgiving, this Cranberry Almond Cake is simple and festive… and as for the rest of party season, this would be a really quick fix if you don’t want to show up at someone’s house empty handed. I just kept it all to myself in my fridge and have been sneaking a slice here and there all week (oops, now my coworkers are going to be mad). ;) NOM! 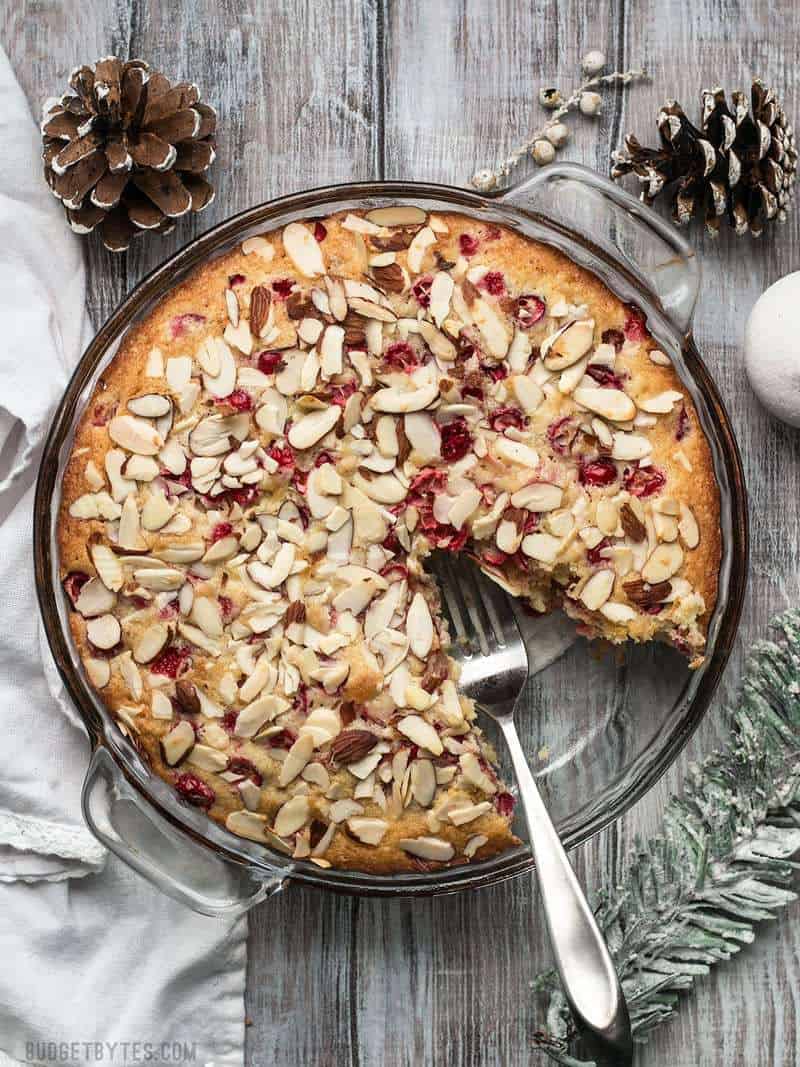 4.86 from 34 votes
This Cranberry Almond Cake is super fast to prepare and the perfect festive dessert for the holiday season. 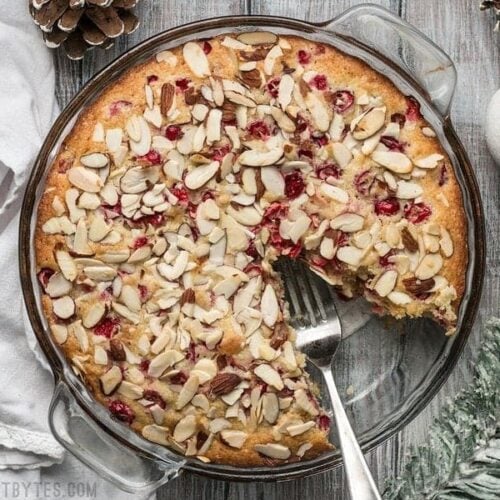 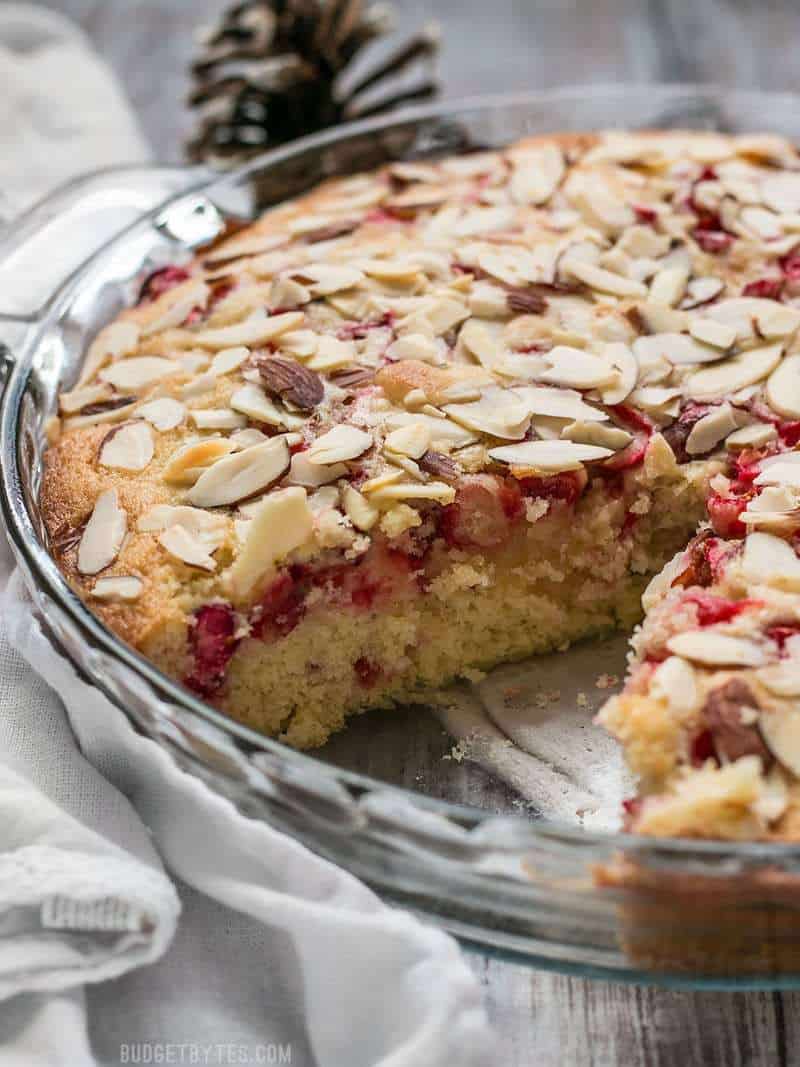 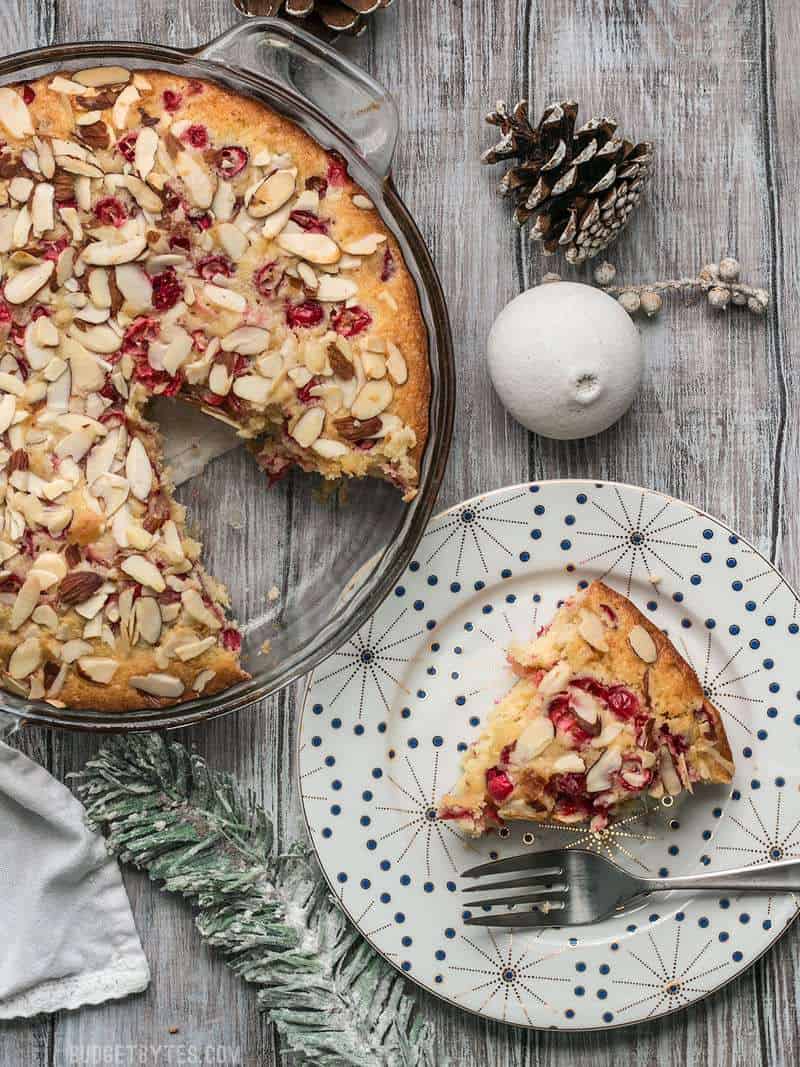 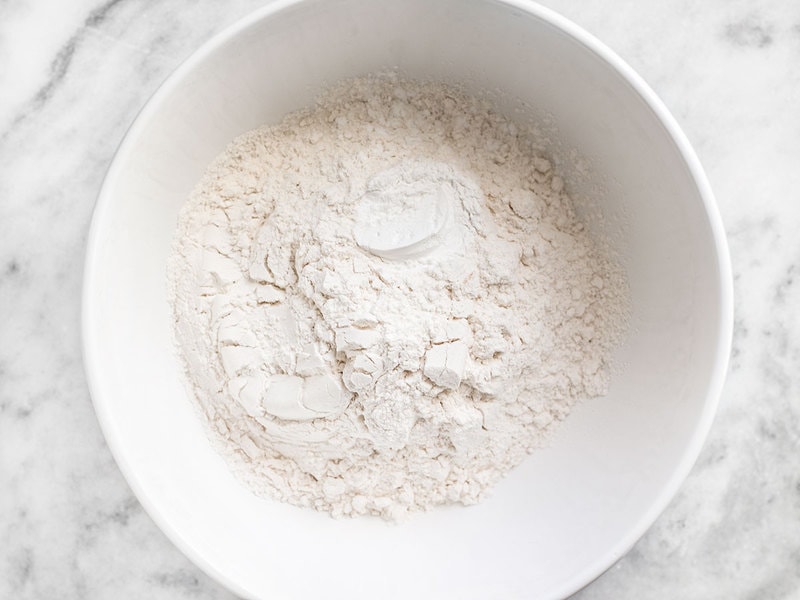 Stir together 1 1/2 cups flour and 1 1/2 tsp baking powder until they are well combined. 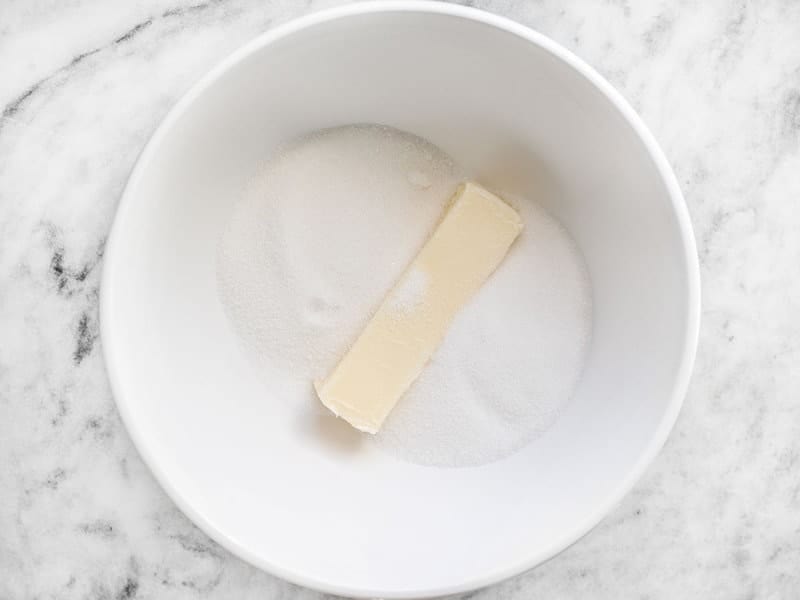 In a separate bowl, beat together 1/2 cup butter and 1 cup sugar until it looks light and fluffy. Make sure the butter is room temperature or else it won’t incorporate with the sugar. Also, make sure to scrape down the sides of the bowl a few times as you beat the mixture together so that there aren’t any large lumps of butter left behind. 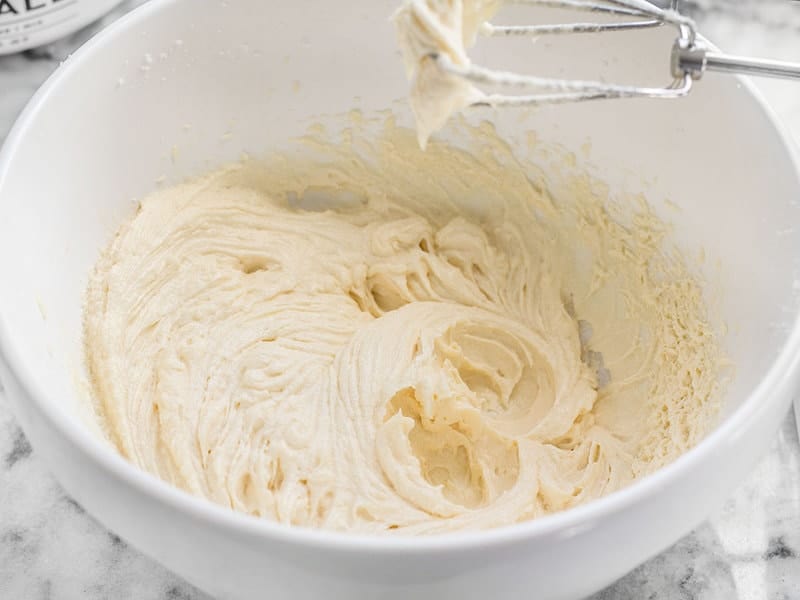 Add 2 large eggs and a 1/2 tsp each of vanilla and almond extracts. Beat again until the mixture is very light and creamy, on high about one minute. (This is my favorite stage of any cookie or cake batter. I have to use all my will power not taste…) 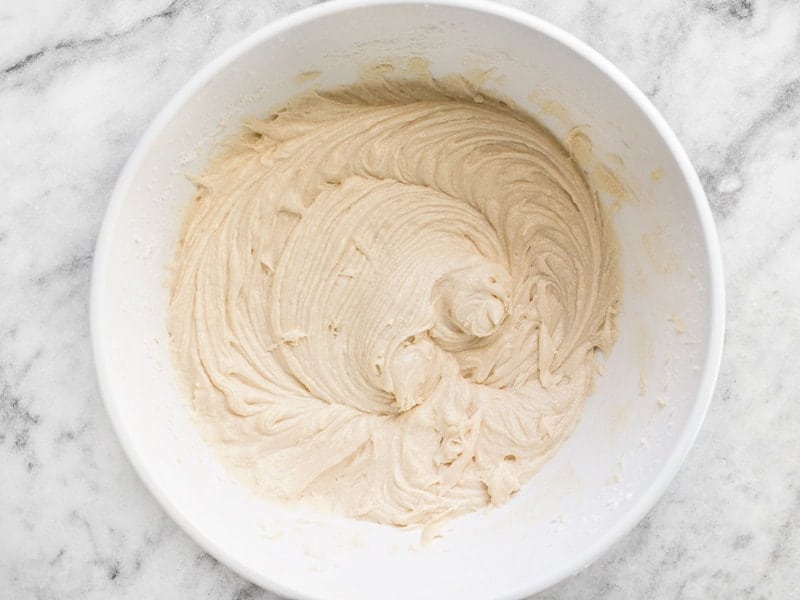 Next, beat in half of the flour mixture. It will get pretty thick, so just beat it until it looks well incorporated (30 seconds or so). Then add half of the milk (1/4 cup) and beat it until it’s incorporated (it may look a little lumpy, that’s okay). Beat the rest of the flour in, followed by the rest of the milk (1/4 cup). In the end, it will look super light, creamy, and velvety like this. This is when I thought to myself, “Who decided to ruin cake batter by baking it?” 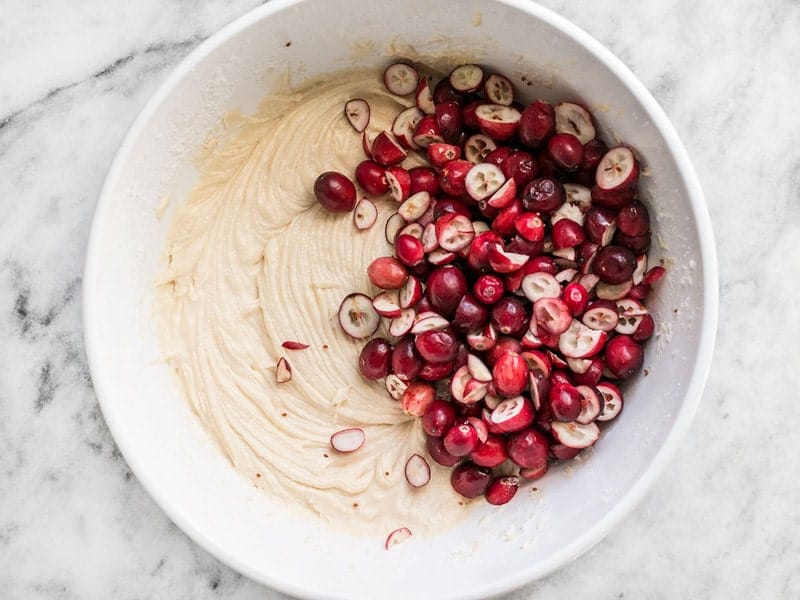 Lightly chop 6oz (1/2 of a standard 12 oz bag) of cranberries so that each berry its at least cut in half. I didn’t take the time or care to slice them all in half individually. You just want to make sure they’re at least cut so that they don’t swell and pop while they bake. Fold half of the chopped cranberries into the batter. 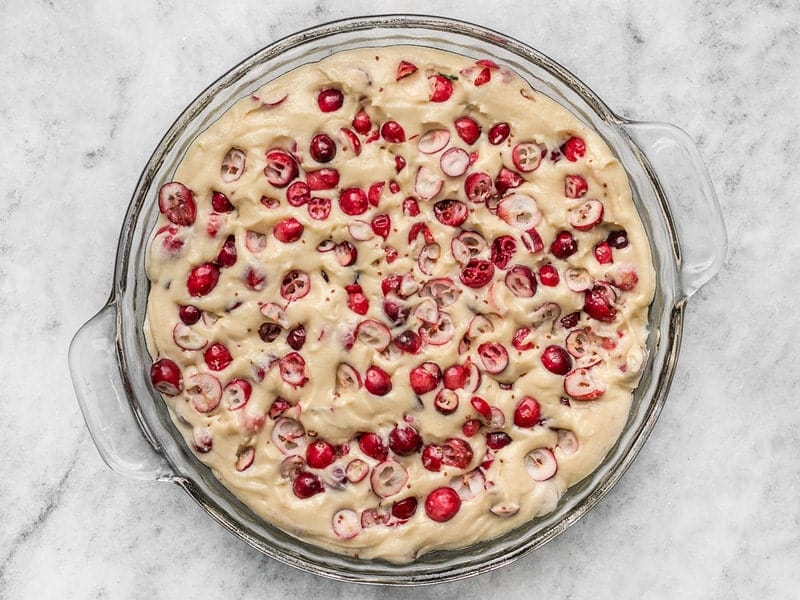 Spread the batter into a 9″ pie plate coated with non-stick spray. Sprinkle the rest of the cranberries over top, then push them down into the batter. 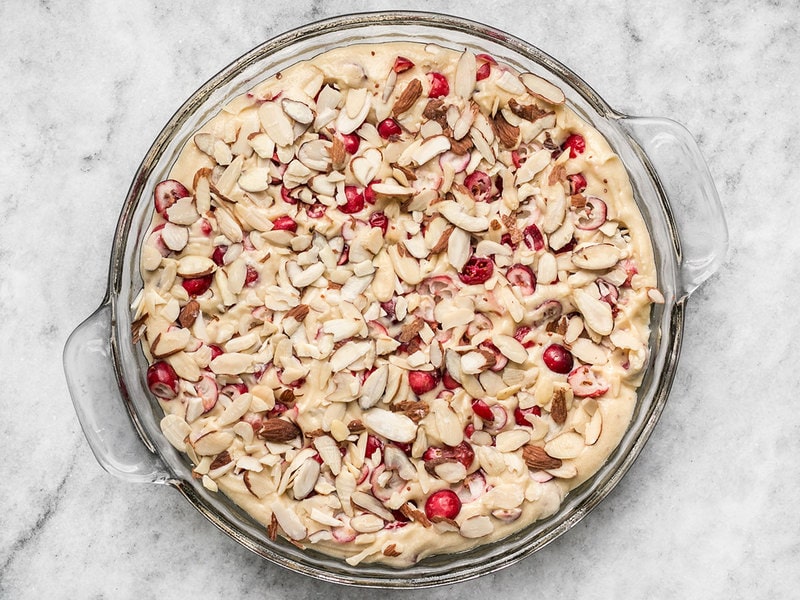 Sprinkle 1/3 cup sliced almonds over top and kind of push them down into the batter so that they stick. Then just pop the whole thing in the oven for about 35 minutes at 350ºF. When it’s finished, it should be golden brown on top (the cake AND almonds). 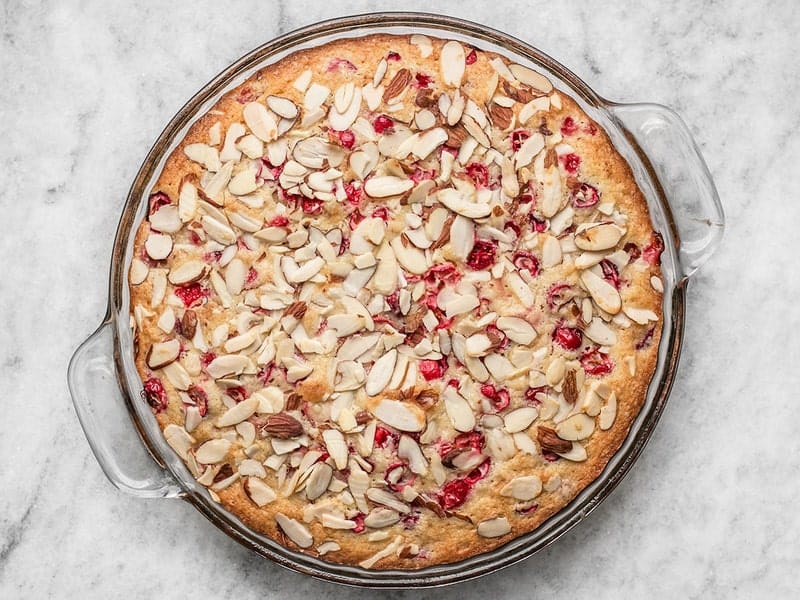 Let it cool a bit before slicing in. 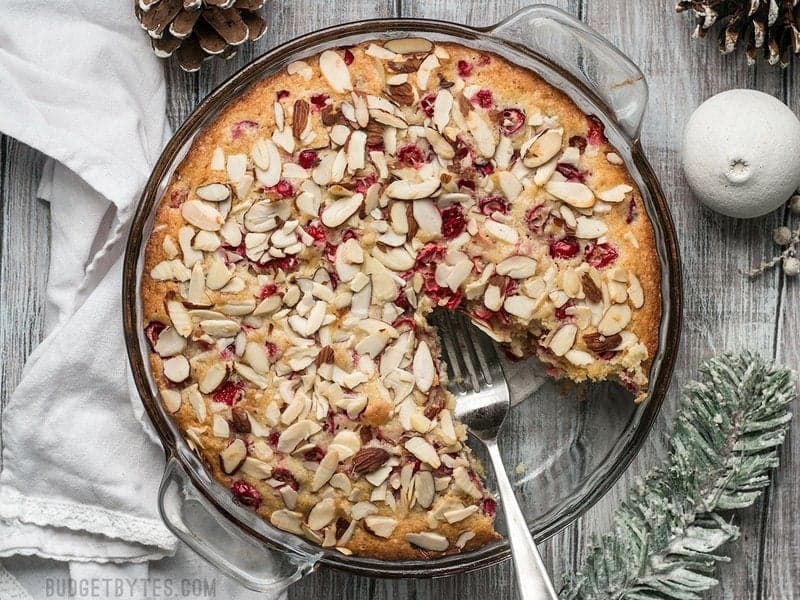 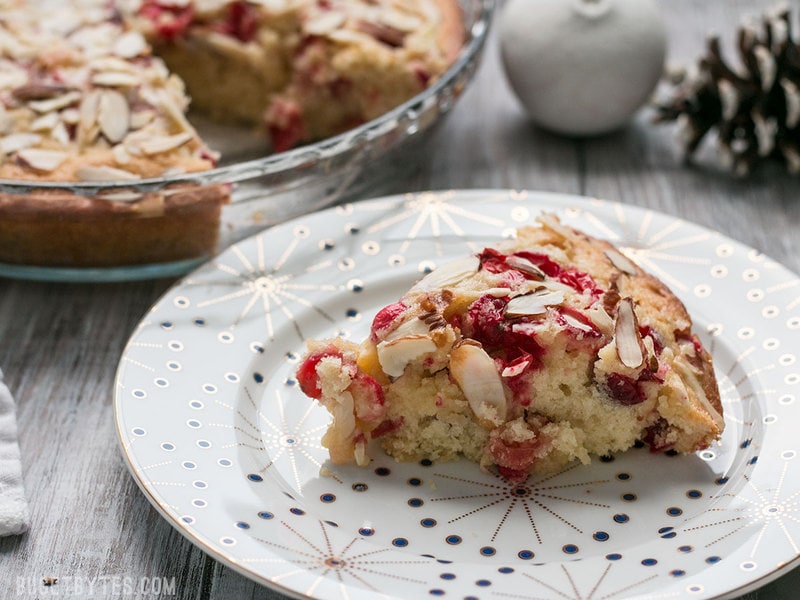