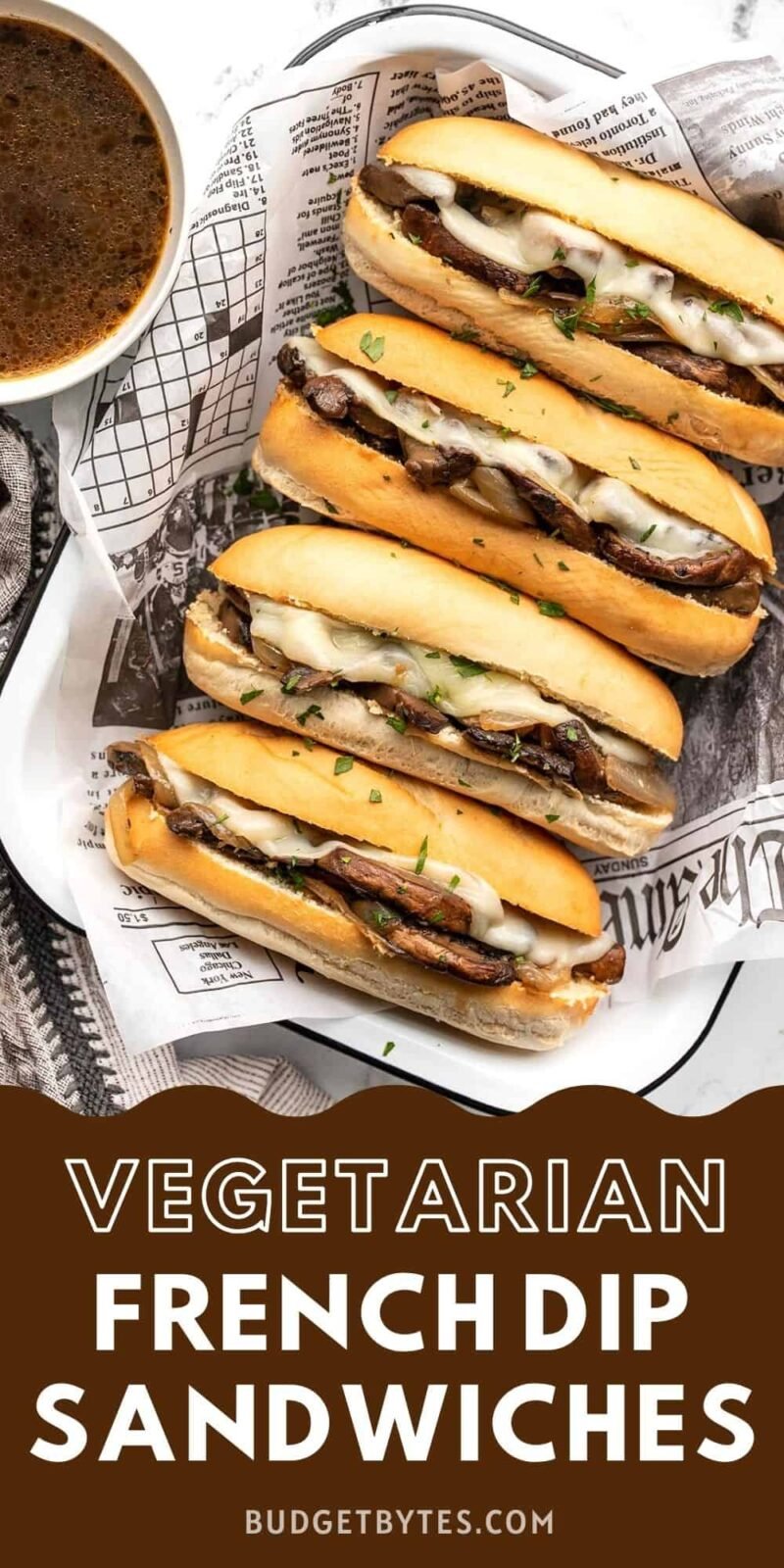 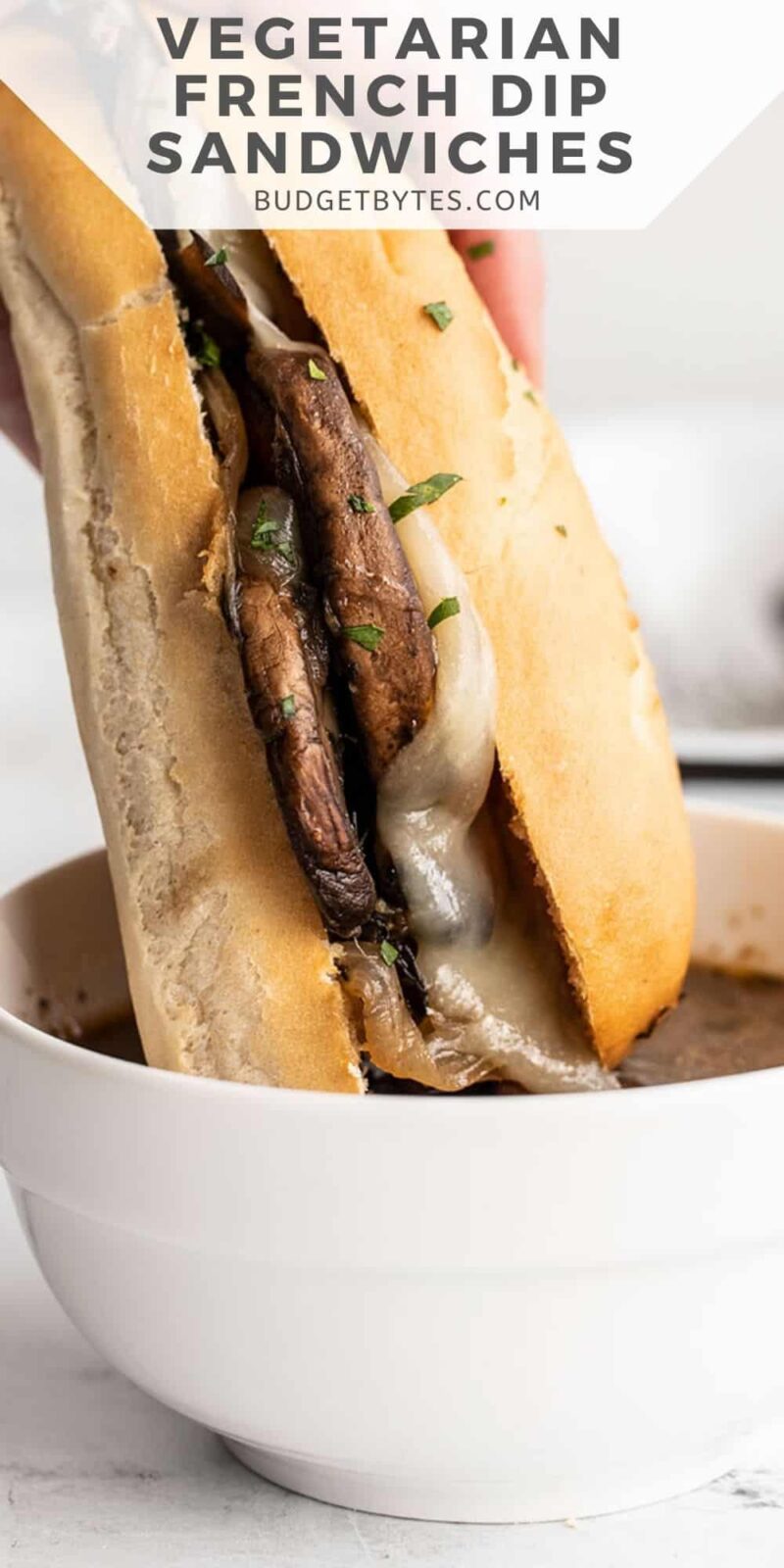 Last week I saw an amazing photo of an incredible slow cooker French dip sandwich recipe and I couldn’t stop thinking about them. I wanted those sandwiches and I wanted them bad. But then I thought, “What if I tried to make vegetarian French dip sandwiches?” and then I was on a mission. This portobello mushroom-based French dip recipe turned out really amazing on the first try. So amazing, in fact, that this is the most enthusiastic that I’ve seen my boyfriend about any recipe that I’ve made for him so far. And I feed him a lot. ;)

What is a French Dip Sandwich?

French dip sandwiches are made with tender shaved beef piled onto a French roll, topped with melted cheese (sometimes) and served with a rich broth, or au jus, for dipping. It’s absolutely delightful. BUT, because beef is so expensive these days, these vegetarian French dip sandwiches made with portobello mushrooms are a really tasty alternative. You won’t belive how delicious this broth is!

And what recipe had me drooling at my computer screen and ultimately inspired the vegetarian version? These Slow Cooker French Dip Sandwiches from Carlsbad Cravings.

How to Make a French Dip Sandwich Vegetarian

I replaced the tender beef in classic French Dip sandwiches with meaty strips of portobello mushrooms and sautéed onions to bulk them up while keeping the price low.

I’d normally add a little Worcestershire to the broth of a beef French dip, but that has anchovies in it. So, to mimic the salty-sweetness of Worcestershire, I added a little soy sauce and just a smidge of brown sugar. That hint of sweetness from the brown sugar really helped balance the flavors and made the broth complex, so don’t be tempted to skip it.

Also, I highly suggest using Better Than Bouillon to make your broth. It has a deep flavor and just the right amount of salt.

How to Store Leftovers

If you’re not eating these sandwiches all at once, store the mushroom and onions in the broth and reheat them together before piling the filling into the sandwiches and dipping them into the remaining broth. You can heat these sandwiches in a matter of minutes under the broiler, so it’s a nice quick meal for leftovers!

What Kind of Bread Should I Use?

One last note. Due to pricing and product availability, I did not use a French loaf for my sandwiches (I know, I know). Instead, I bought a pack of hoagie rolls that worked quite well. The key to choosing your bread for these sandwiches is to make sure you have something very sturdy and crusty so that it holds up to dipping in the delicious broth.

*The type of broth you use will greatly affect the end flavor of the au jus. I used vegetable flavored Better Than Bouillon concentrate to make my vegetable broth.
See how we calculate recipe costs here.
Tried this recipe?Mention @budgetbytes or tag #budgetbytes on Instagram!

Enamelware Sheet Pan
The equipment section above contains affiliate links to products we use and love. As an Amazon Associate I earn from qualifying purchases.

Slice one yellow onion into thin strips. Wash and slice three portobello caps. I used three caps, which weighed ½ lb. total. I like to slice them in half, then crosswise into strips so that the strips aren’t super long.

Add the onions and 2 Tbsp butter to a deep skillet. Sauté the onions over medium heat just until they begin to soften (about 3 minutes).

Add 2 cups of vegetable broth to the skillet and stir to dissolve the browned bits off the bottom. Then add 1 Tbsp soy sauce, 1/2 Tbsp brown sugar, and 1/8 tsp garlic powder.

Let the au jus come up to a simmer, then turn it down to low and let it simmer for 5-10 minutes while you toast the bread.

Place four opened French or hoagie rolls on a baking sheet, open side up. Turn the oven on to broil and toast the bread under the broiler just until you start to see a little browning on the edges. I kept my oven rack in the middle so that the bread was far enough away from the broiler that it wouldn’t toast super fast. That gives you a little more room for error.

Use tongs or a slotted spoon to pick the mushrooms and onions up out of the au jus, then pile them onto the toasted rolls.

Add a slice of provolone to each…

Then return the sandwiches to the broiler to melt the cheese. The open bread will continue to brown here, so if your bread was a little more on the brown side after the first broil, flip the pieces over so they’ll brown on top instead.

Finally, close up the sandwiches and serve while hot! But don’t forget to ladle that yummy au jus into little bowls for dipping.