Ooooh, I ate good for lunch today! 🤤 I whipped up this really easy Skillet Pineapple BBQ Chicken, spooned it over some rice, and fixed a little broccoli for the side. I absolutely love skillet chicken dishes because the browning action that you get in a skillet makes super flavorful pan sauces without the need for a million ingredients. This sauce combines sweet pineapple, tangy BBQ sauce, and the savory chicken drippings for a to-die-for sauce. So easy and delicious, so little needed. This is the perfect easy weeknight dinner! 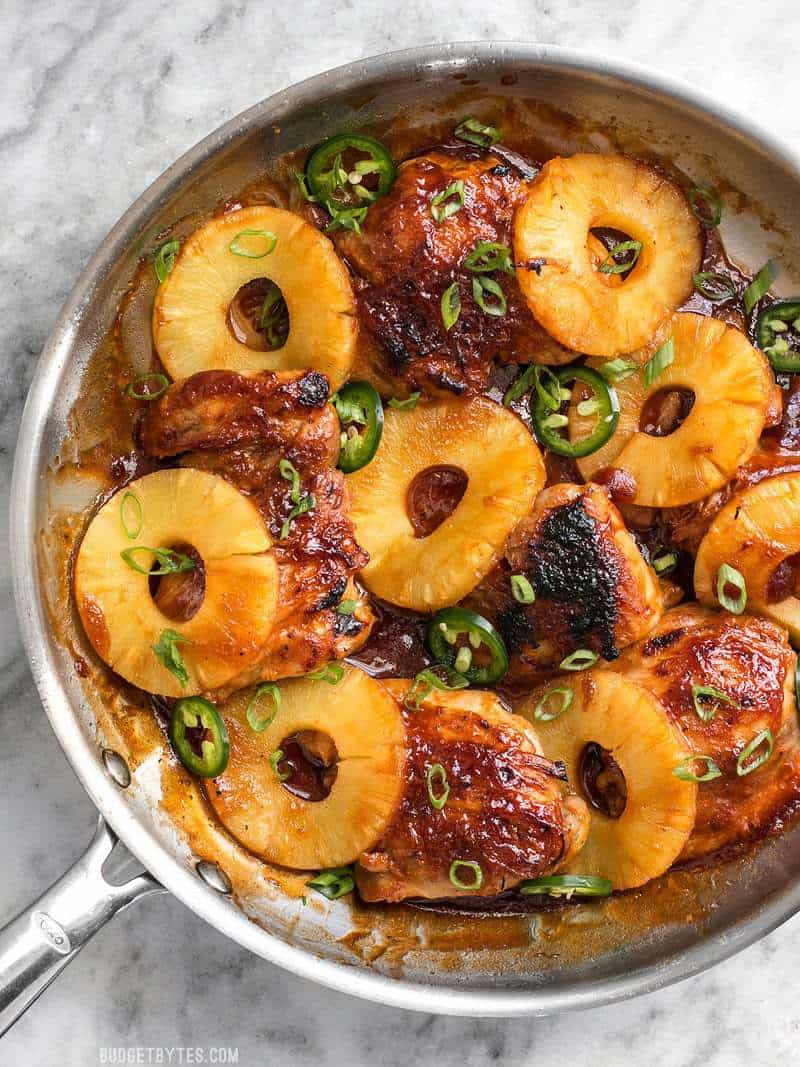 Make it Spicy or Mild

I’ve had a thing lately for super thinly sliced fresh jalapeños, so I added those to the dish at the end, but they are entirely optional if you don’t want a spicy dish.

Can I use Chicken Breast?

Also, you can totally do this with chicken breasts instead of thighs. I do suggest pounding the chicken breast to an even thickness first to help them cook evenly (You don’t want the tip to get tough and rubbery before the thick part cooks through).

P.S. I used regular BBQ sauce in effort to make a “base” recipe but as I was standing in the sauce aisle at the grocery store my mind was spinning with all the fun BBQ sauce flavors that would go great with this. Or maybe it was spinning because I had just gotten out of a really hard circuit training class. Either way, there are a lot of options! 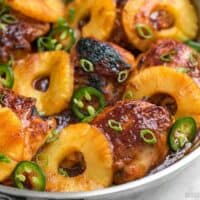 *Boneless, skinless chicken breasts can also be used, but should be pounded to an even thickness before cooking. **Do not place teflon skillets or skillets with plastic handles under the broiler.
Nutritional values are estimates only. See our full nutrition disclosure here.
Tried this recipe?Mention @budgetbytes or tag #budgetbytes on Instagram! 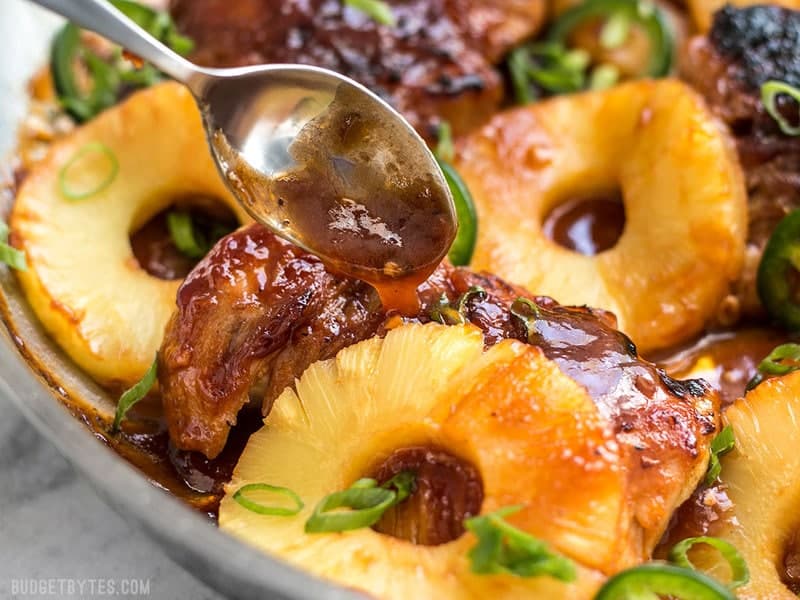 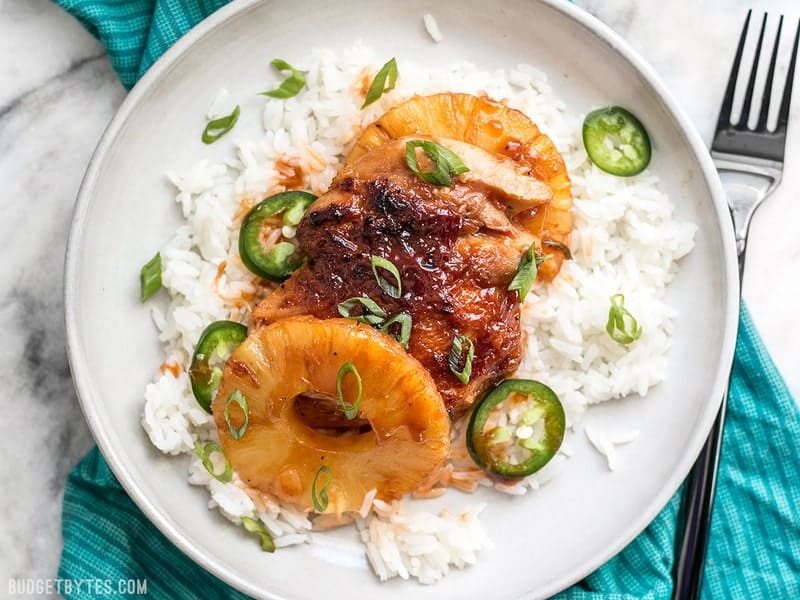 How to Make Pineapple BBQ Chicken – Step by Step Photos 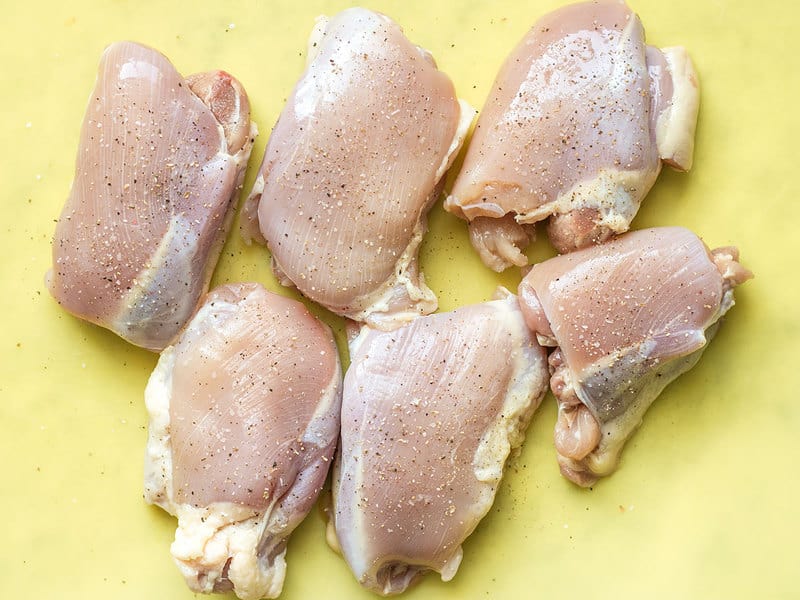 Heat a large skillet over medium, then add a tablespoon of cooking oil and swirl to coat the bottom of the skillet. While waiting for the skillet to heat, season both sides of six boneless, skinless chicken thighs with a pinch of salt and pepper. 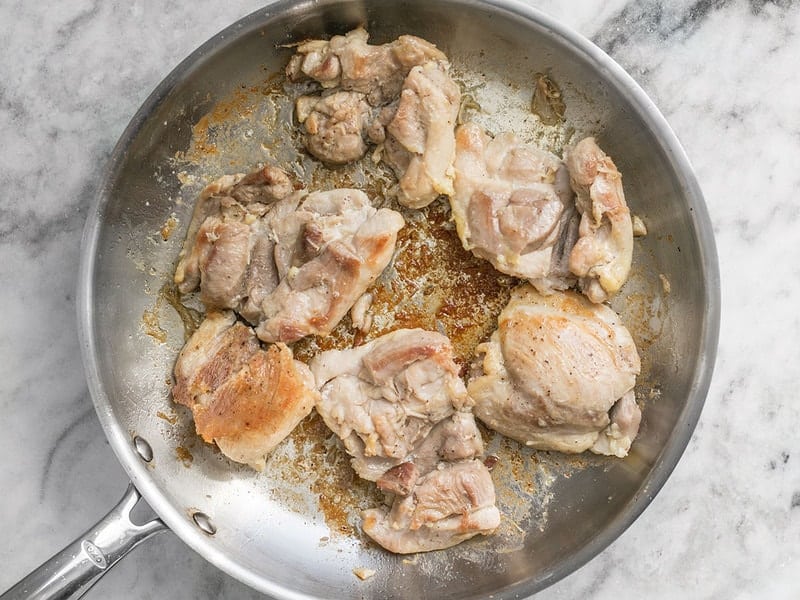 One the oil is hot and shimmering, add the chicken thighs and cook until golden brown on each side and cooked through. Remove the cooked chicken thighs to a clean plate. 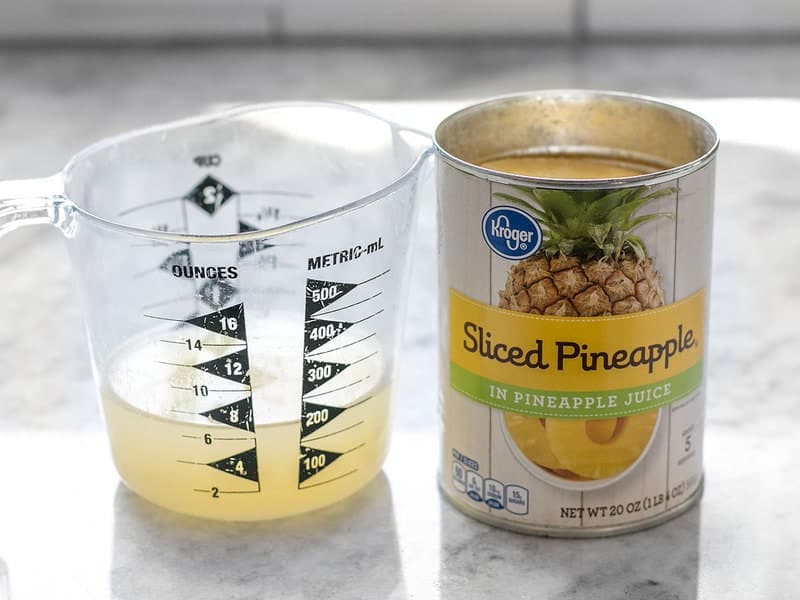 While the chicken is cooking, drain and reserve the juice from a 20 oz. can of pineapple slices (packed in juice, NOT heavy syrup). 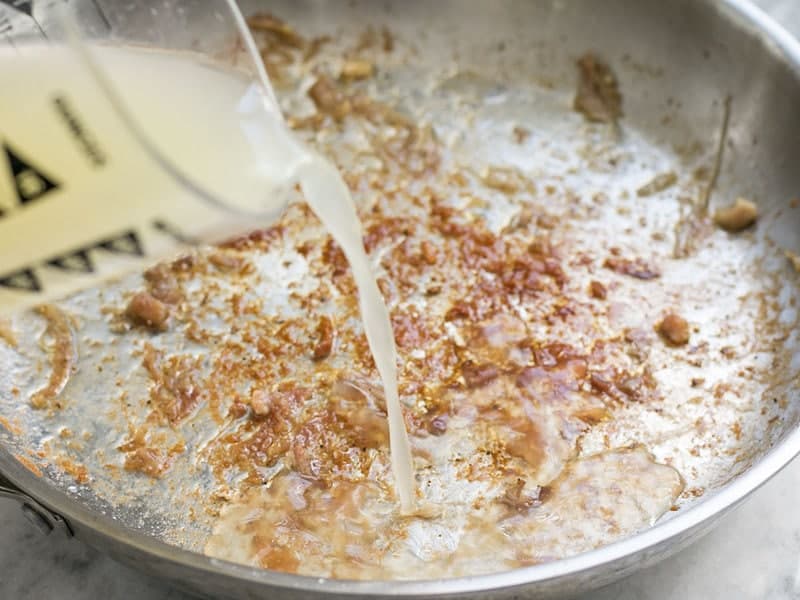 After removing the chicken from the skillet, turn the head down to low and add about 1/2 cup of the pineapple juice. Stir to dissolve the browned bits off the bottom of the skillet. You want to stir and gently scrape until it all comes off the skillet and is floating around in the liquid. 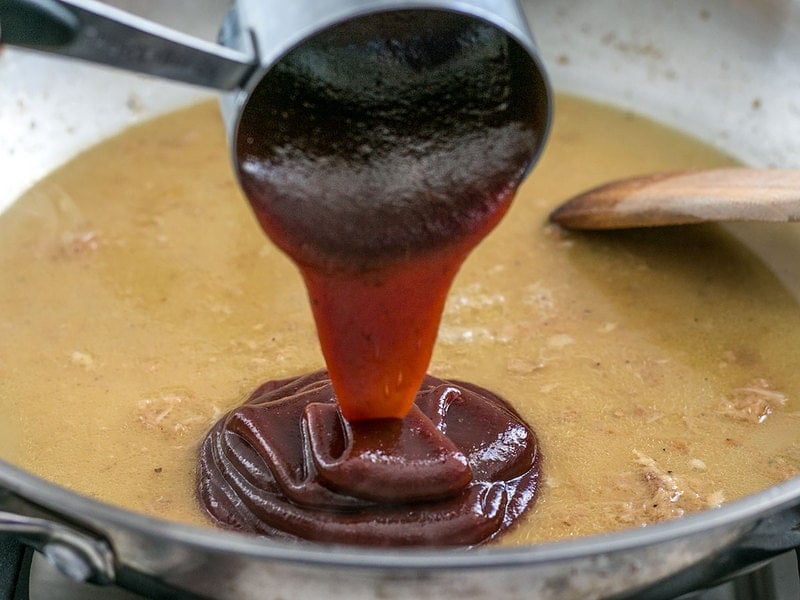 See how the appearance of the pineapple juice has changed after all the chicken bits are dissolved into it? Add 1/2 cup BBQ sauce and stir until a thick sauce forms. 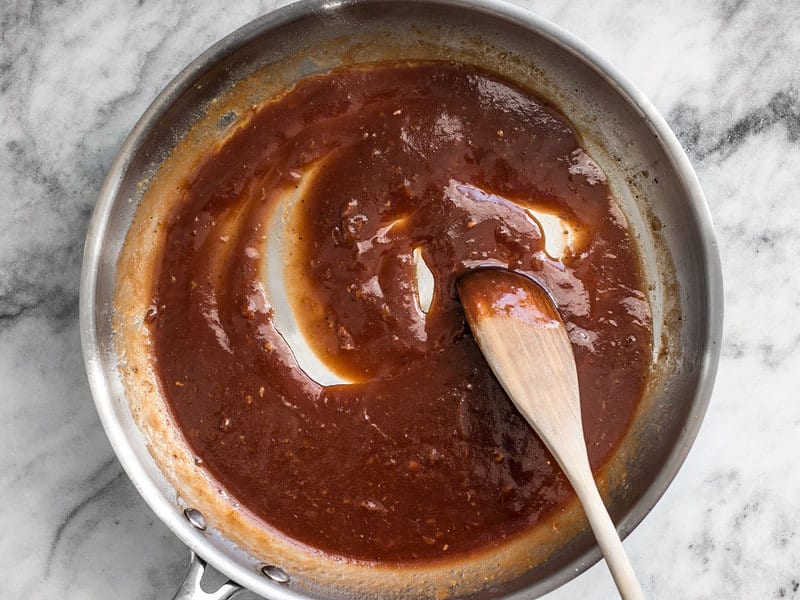 If the sauce is too thick (say, if the skillet was too hot and the juice reduced too much), you can add a splash more of the reserved pineapple juice. Taste the sauce and add salt if needed. The chicken I used was heavily brined, so that seemed to season the sauce well enough with salt. And when I say brined, that’s like when you look at the package and it says “contains up to 15% broth” or “sodium chloride solution”. That’s basically a brine that makes the meat super tender and juicy. 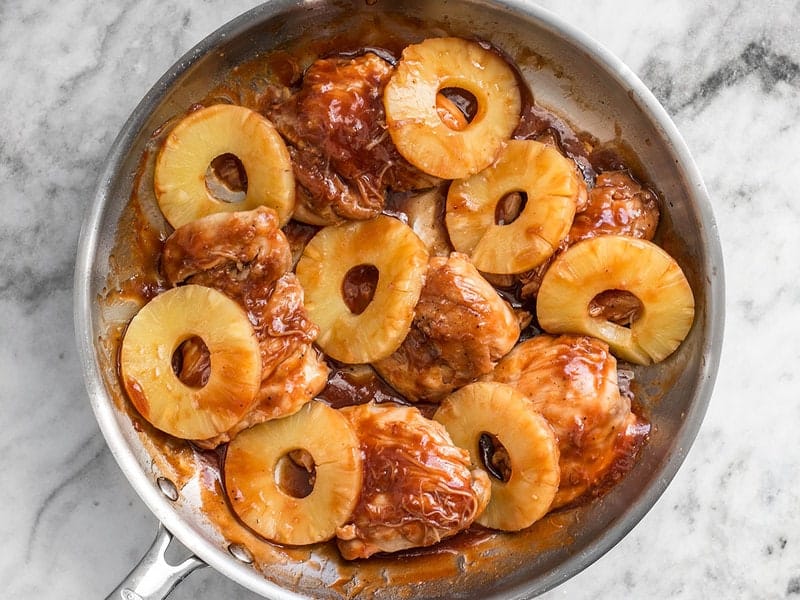 Add the cooked chicken back to the skillet along with the pineapple slices, dredging both sides of both in the pineapple bbq pan sauce. Adjust your oven’s rack so that the skillet will be about 6 inches from the broiler unit, then turn the broiler on to high. If your skillet is not oven safe, you can put everything in a casserole dish or just skip the broiling part (it’s still quite delicious at this point!). 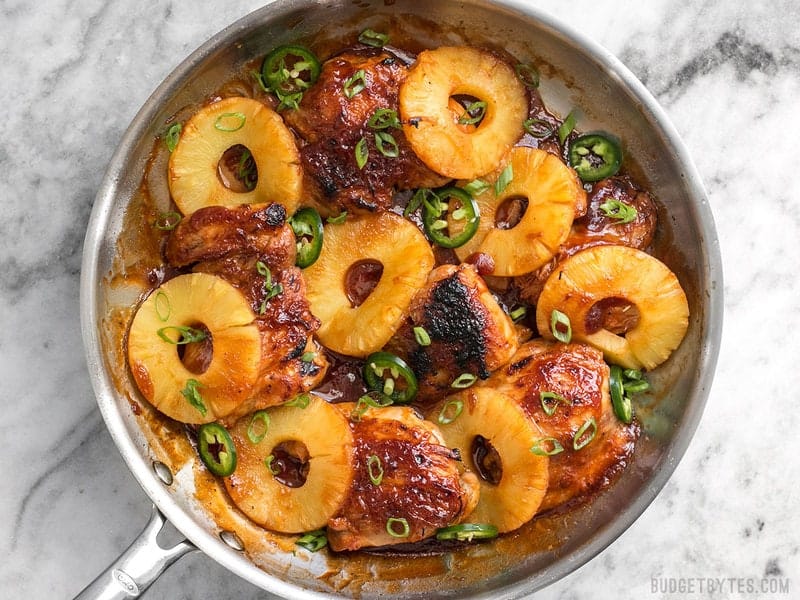 Broil the chicken and pineapple for about five minutes, or until it’s caramelized on top and the edges. Sprinkle thinly sliced jalapeño and green onion over top, then serve! 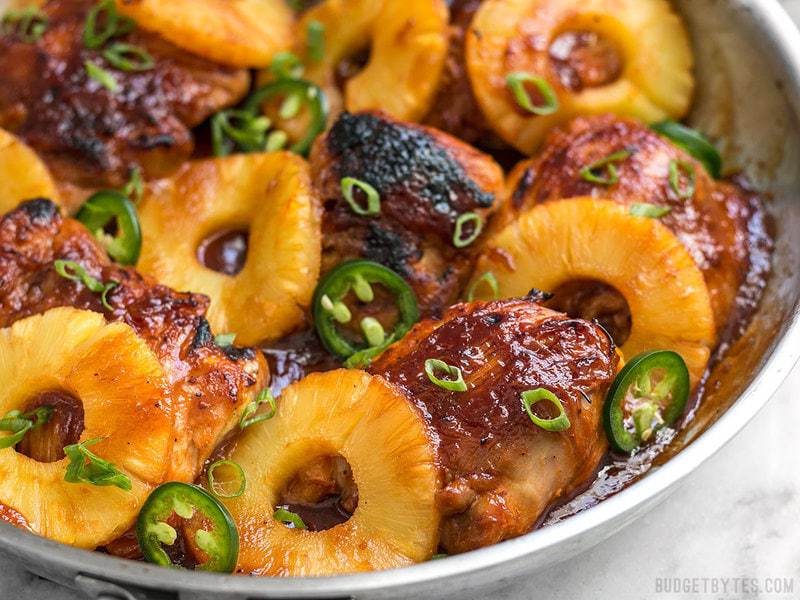 Seriously though, that pan sauce… And I can’t lie. If you sprinkled some Monterey jack cheese over the skillet pineapple BBQ chicken before broiling, it would be like a BBQ chicken pizza minus the crust. 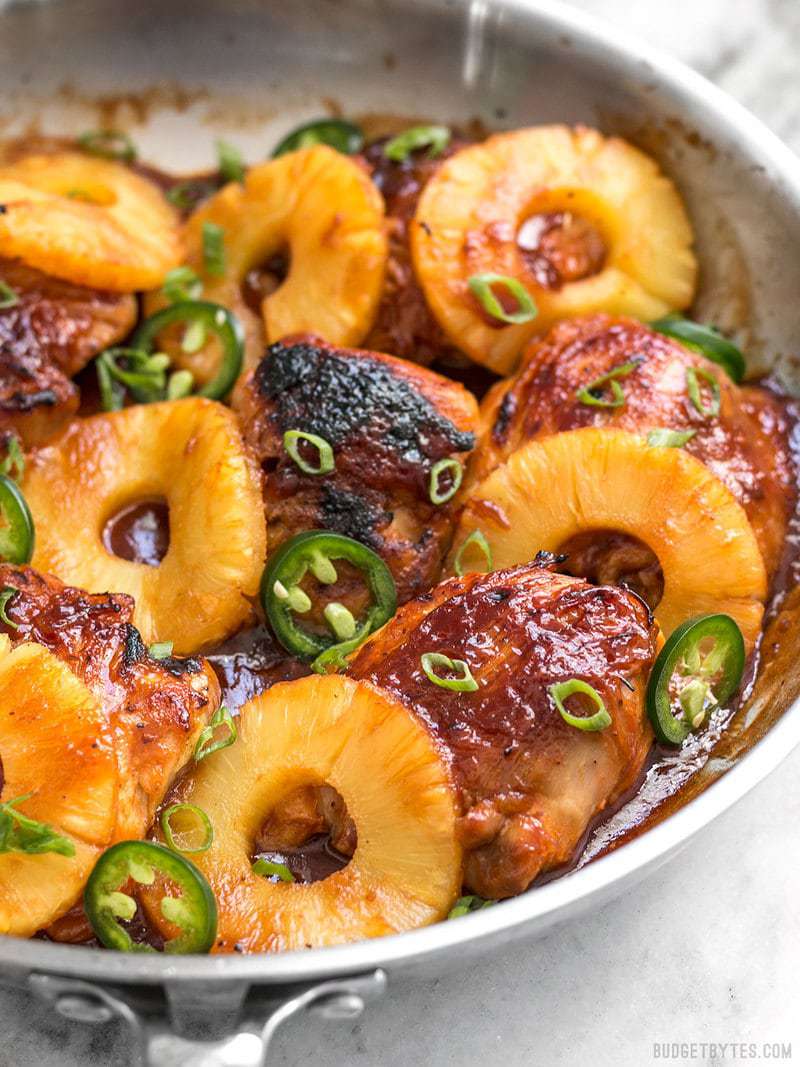