Soup season is already on its way out, but I couldn’t resist one more warm and cozy pot of goodness. For this super easy and deliciously chunky Ham and Bean Soup I took cue from my easy Rosemary Garlic White Bean Soup and used a puréed can of beans to thicken the pot, combined that with some chunky and colorful vegetables and a handful of diced ham to round out this meal in a bowl. This is also a great use for your leftover holiday ham, so bookmark this recipe for Easter next month! 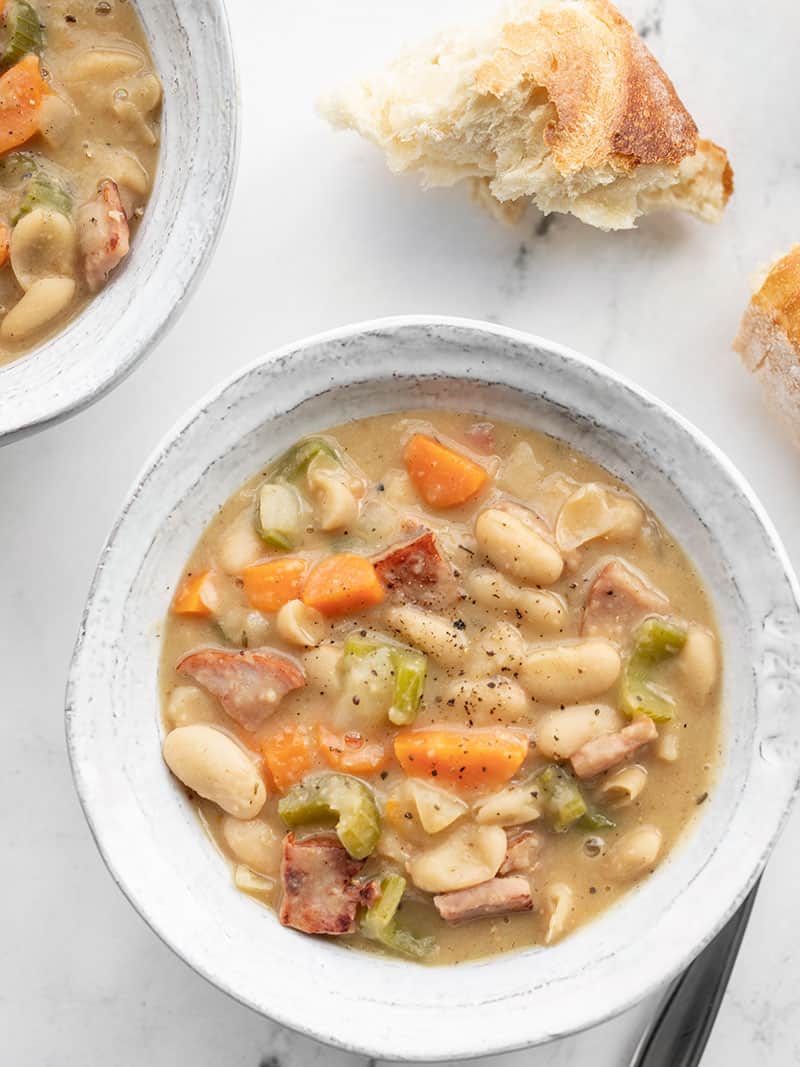 What Kind of Beans Should I Use?

I used cannellini beans for this soup because I love their large shape and creamy texture. You can also use a different type of white beans, like navy beans or great northern beans.

Can I Use Dry Beans?

What Kind of Ham Can I Use?

You can use virtually any cooked ham. The ham I used is an uncured, fully cooked, thick sliced ham. If using pre-sliced ham, a thicker slice works a little better than thin sandwich slices, which won’t give much texture to the soup. If you have leftover cooked ham from Easter or any other holiday, that can also be used in this recipe.

Can I Freeze Ham and Bean Soup?

Yes, this soup is a great candidate for freezing! Simply chill the soup completely in the refrigerator overnight before transferring to the freezer for long term storage (about 3 months). I prefer to divide my soup into single servings before freezing, so they can be reheated as needed and in the amount needed. Quart-sized freezer bags are great for freezing soup, as are the small blue-top Ziploc food storage containers. 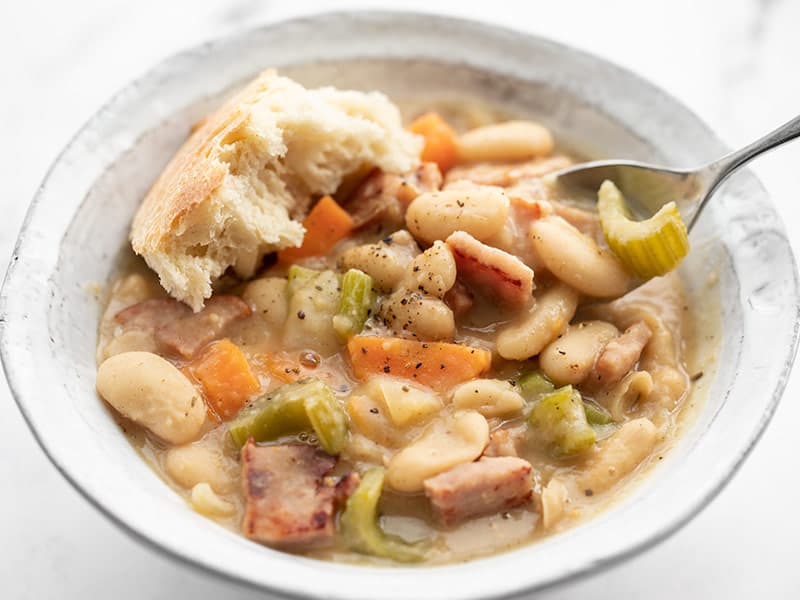 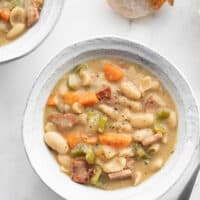 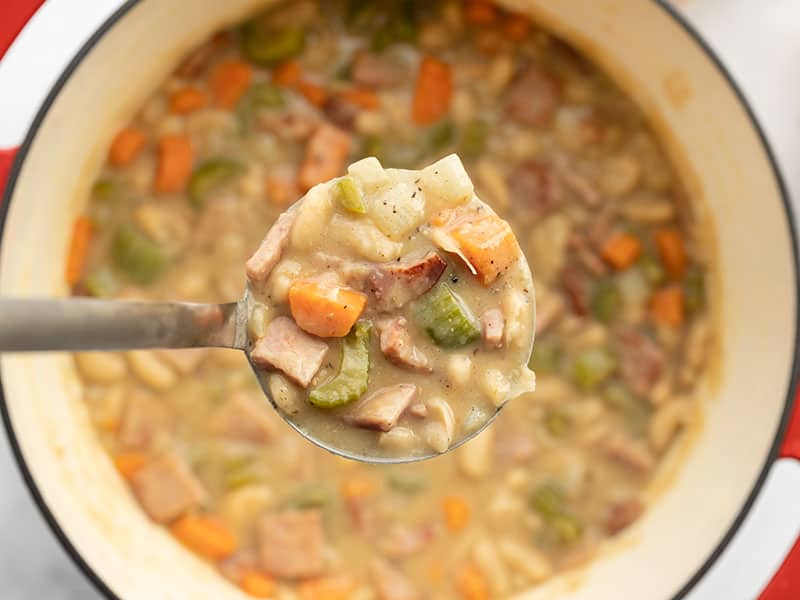 How to Make Ham and Bean Soup – Step by Step Photos 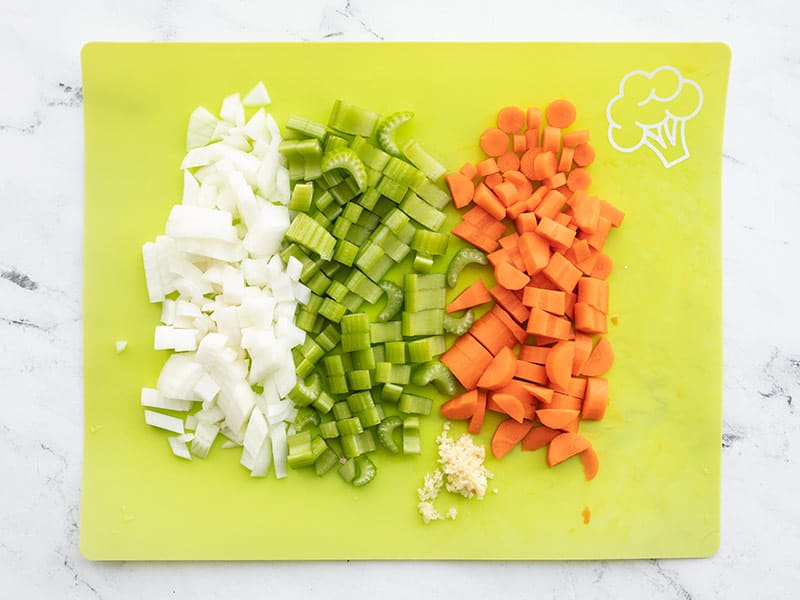 Before you begin, dice one yellow onion, peel and slice three carrots, slice three ribs of celery, and mince two cloves of garlic. 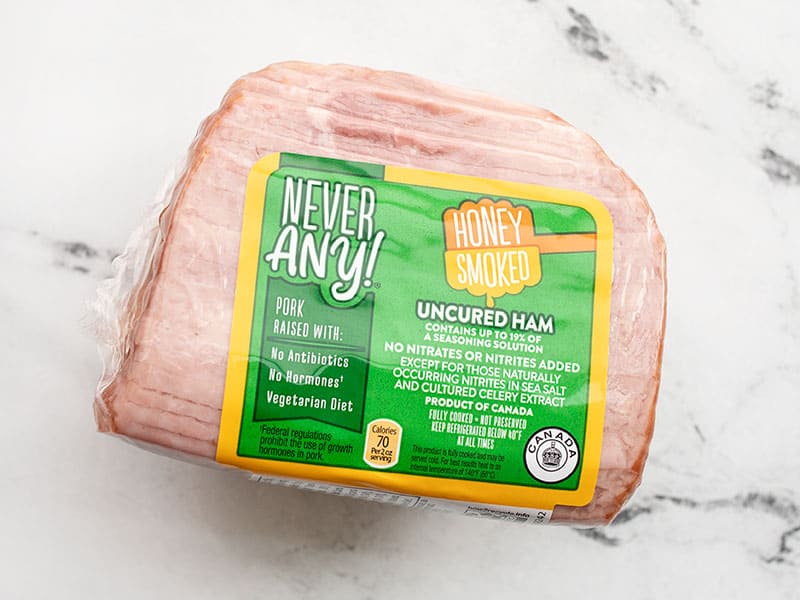 This is the type of ham I used. You can use any cooked ham, but a thicker slice works better than thin sandwich slices. You can also use cooked holiday ham. You’ll need one pound of cooked ham. 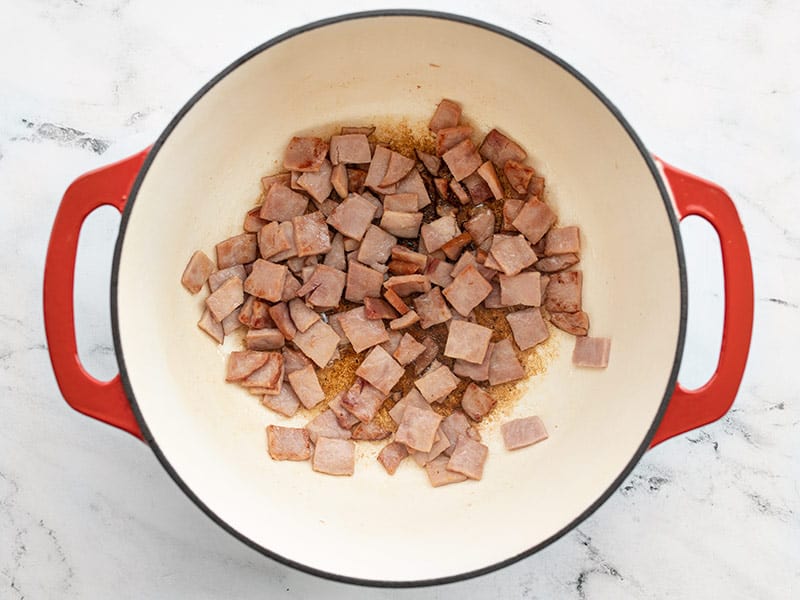 Dice one pound of ham and add it to a soup pot with one tablespoon cooking oil. Cook the ham over medium heat for about 5 minutes, or until the ham is browned on the edges. Remove the ham to a clean bowl. 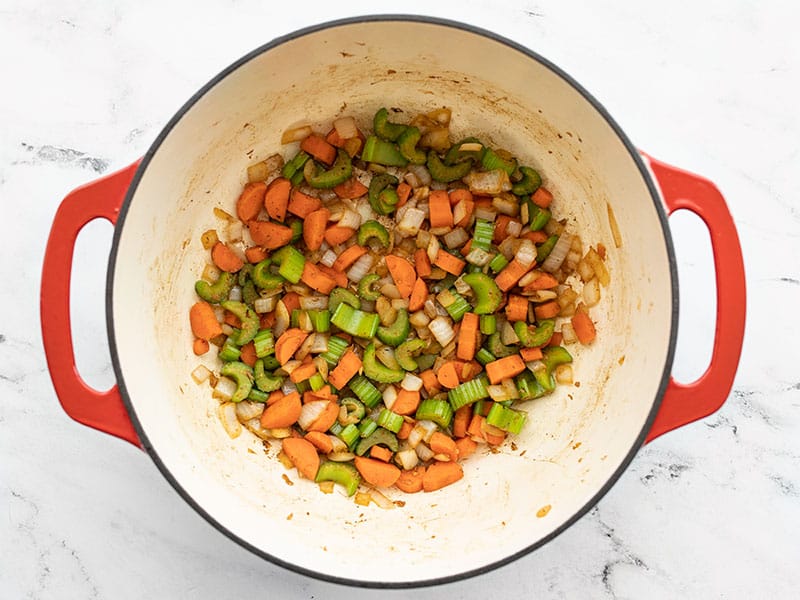 Add the onion, carrot, celery, and garlic to the pot in place of the ham and continue to cook over medium for about 5 minutes, or until the onions are softened. Use the moisture released from the vegetables to dissolve the browned bits off the bottom of the pot. 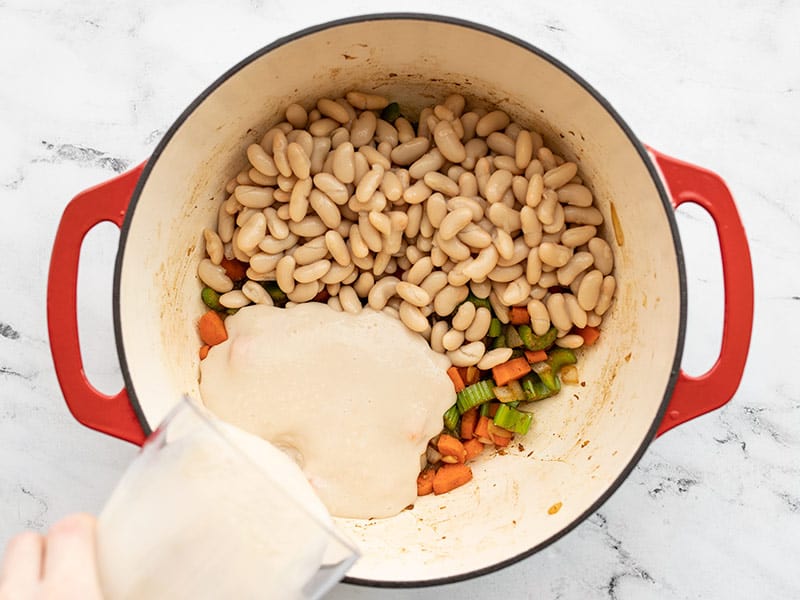 While the vegetables are cooking, add one of the three cans of cannellini beans to a blender (with the liquid from the can) and purée until smooth. Drain the other two cans. Add the puréed beans and drained beans to the soup pot. 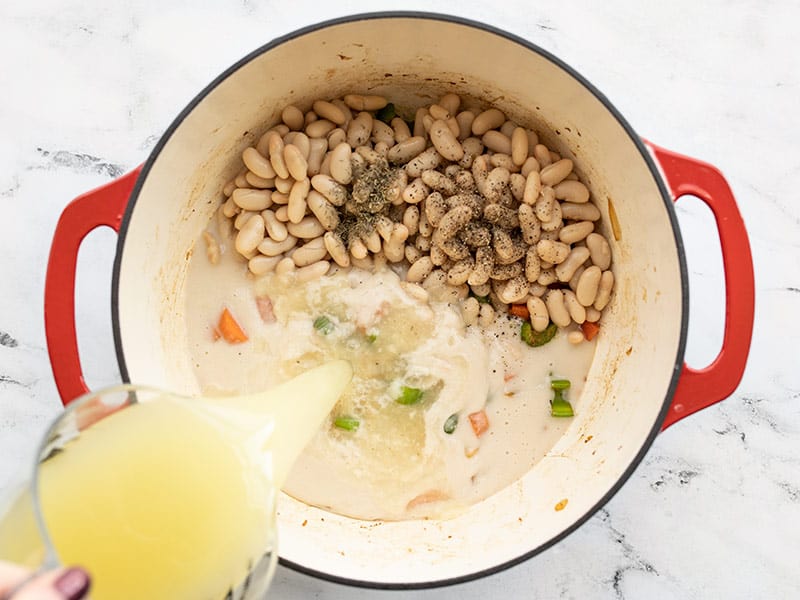 Also add 1/4 tsp dried thyme, some freshly cracked pepper, and 2 cups of chicken broth to the pot. Stir to combine. The soup will be fairly watery at this point. 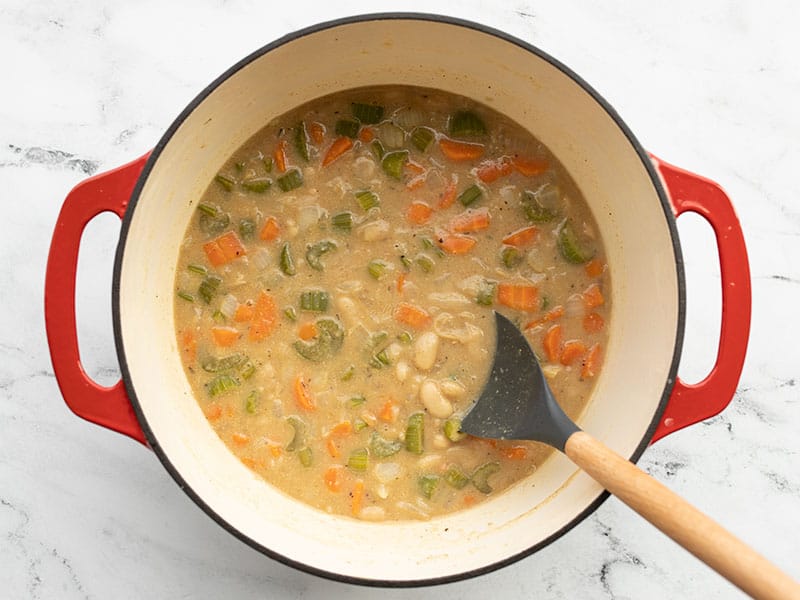 Turn the heat up to medium-high and bring the soup up to a boil. Once it reaches a boil, turn the heat down slightly to medium and let the soup boil for 15 minutes, stirring often. The soup will reduce and thicken as it boils. If it becomes too thick for your liking, simply add a little more water or chicken broth to reach your desired consistency. 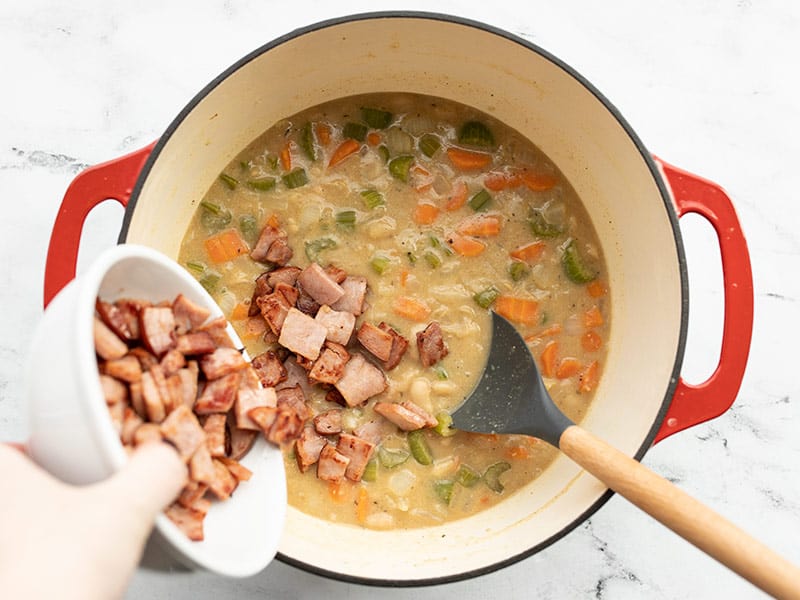 After boiling the soup for 15 minutes, stir the cooked ham back into the pot. Give the soup a taste and adjust the salt or pepper, if needed. 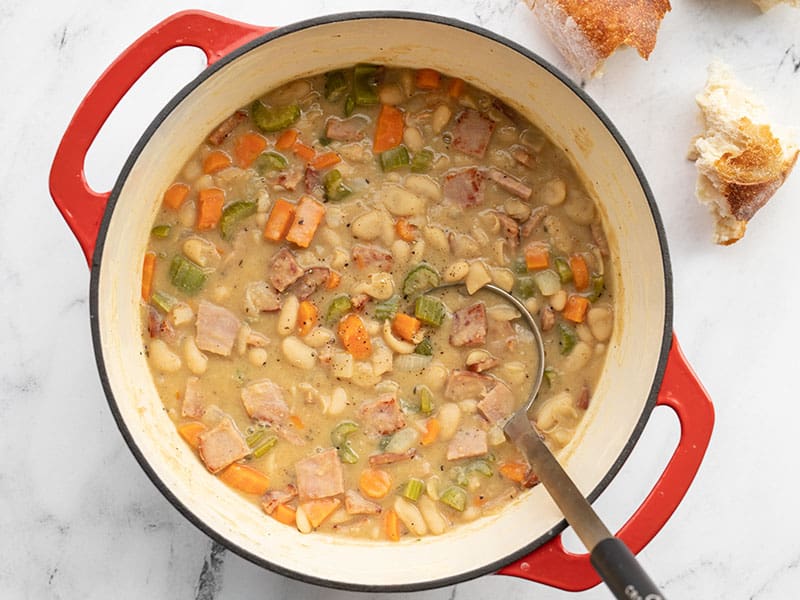 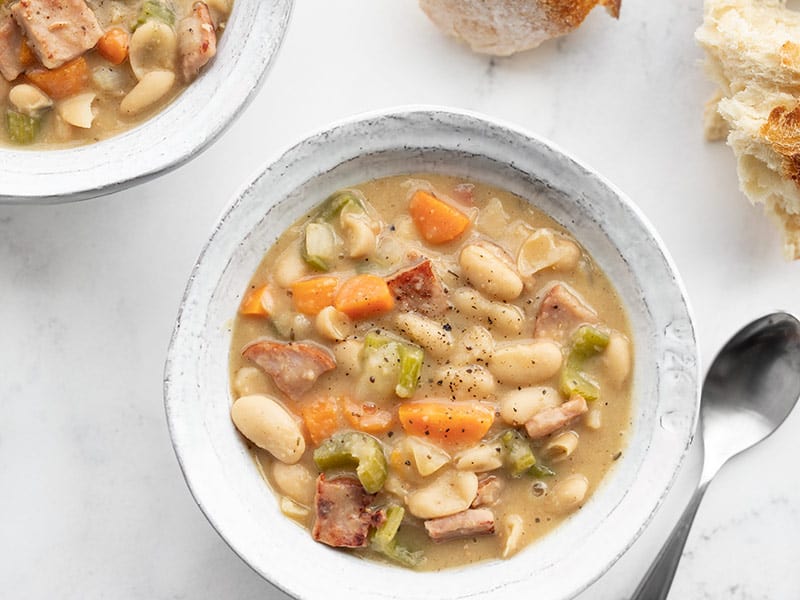