As I was sitting at work last night all hungry and tired, I read an email from Ashlee, a reader who had recently had some out of this world beef stew. She was writing to ask if I had a recipe, which I didn’t, but her description of the beef stew that she had tasted made my mouth water, so I knew I had to make some ASAP.

This beef stew knocked my socks off. Okay, so maybe I was really hungry and really in the mood for red meat, but it is still undeniably good. Not to mention, it was seriously easy to make.

I’m a firm believer that any time beef and tomatoes come together, red wine should join the party, but I made this stew sans red wine just to make sure that it would still be delicious for those who didn’t want to use wine. I have to say, it was surprisingly good even without the wine, but if you want to use wine, just sub one cup of the beef broth with whatever red wine you have on hand.

My pot made about 8 cups, which could be anywhere from 6-8 servings. In the south we put anything with any sort of gravy over rice, so I suggest stretching this beef stew even further by serving it over some inexpensive rice. You’ll get 8 big servings that way. 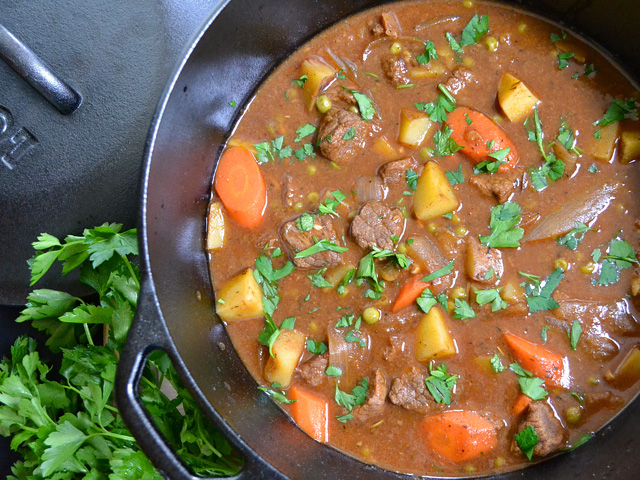 *I use concentrated beef broth (bouillon) + water to make broth, which is less expensive than canned broths.
Nutritional values are estimates only. See our full nutrition disclosure here.
Tried this recipe?Mention @budgetbytes or tag #budgetbytes on Instagram! 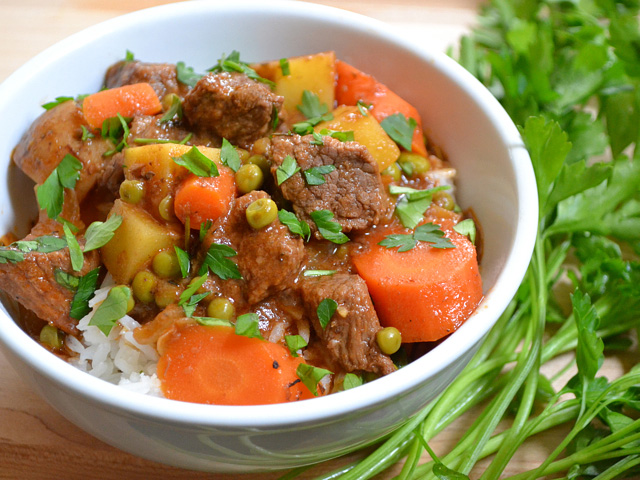 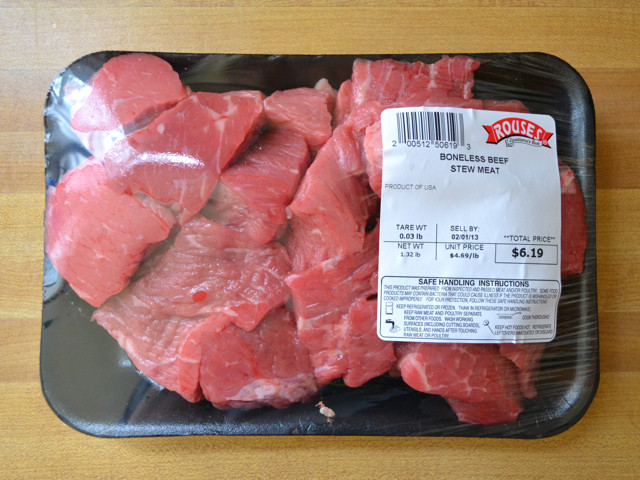 Most grocery stores sell beef “stew meat.” It’s already cut into chunks, but those chunks are HUGE, so I cut each one into about three smaller pieces. My package was 1.3 pounds. Anything between one and 1.5 pounds would be fine. 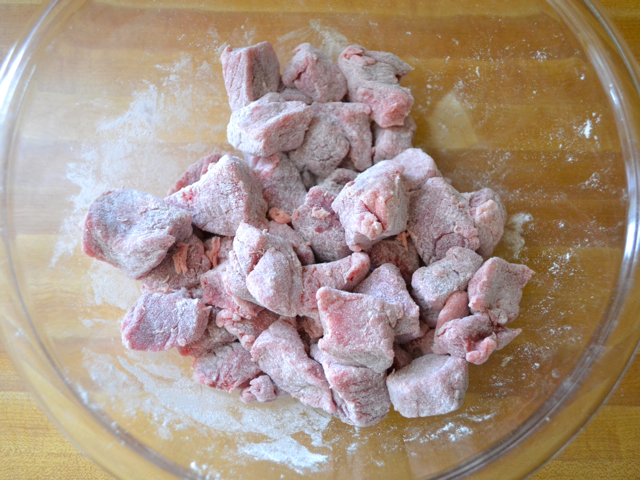 Toss the beef chunks with flour until they’re coated. The flour not only helps thicken the stew, but it helps the browning/caramelization of the beef, which creates a nice deep flavor. 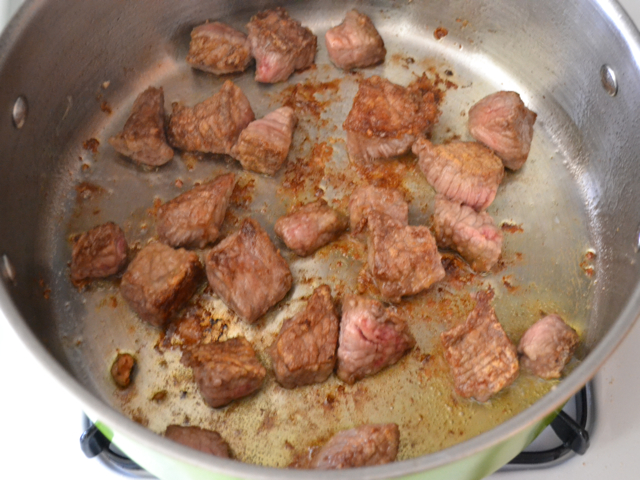 Heat the oil in a large pot over medium heat. Add about half of the beef and let it brown. Stirring the beef will keep it from browning, so just stir once when the bottom sides get brown. The beef does not have to be completely cooked or completely browned on all sides. Just let it get fairly browned. Remove the browned pieces from the pot and then brown the second half. Remove the second batch of beef once it’s browned. 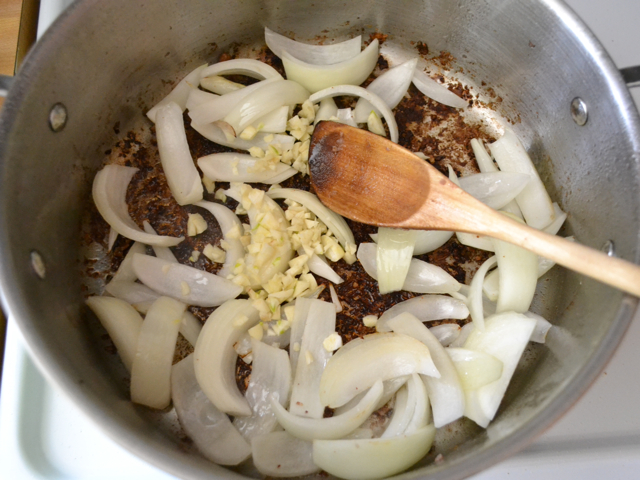 While the beef is browning, cut the onions and mince the garlic. I wanted my stew to be chunky, so I cut the onions into wedges rather than dicing it. Cook the onions and garlic in the pot for a few minutes. If it begins to look like the browned bits are going to burn (like mine, see how dark it is?) move on to the next step right away. 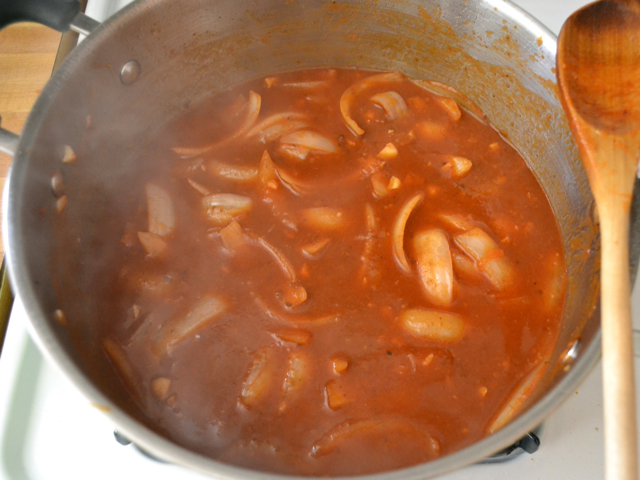 Add the beef broth and tomato paste to the pot. Stir the liquid well to dissolve the browned bits off of the bottom of the pot. I used 3 oz. of tomato paste, which is half of one of those small cans, or roughly 1/4 cup. You can freeze the remaining tomato paste for use in another recipe (I just pop it in a ziplock bag). 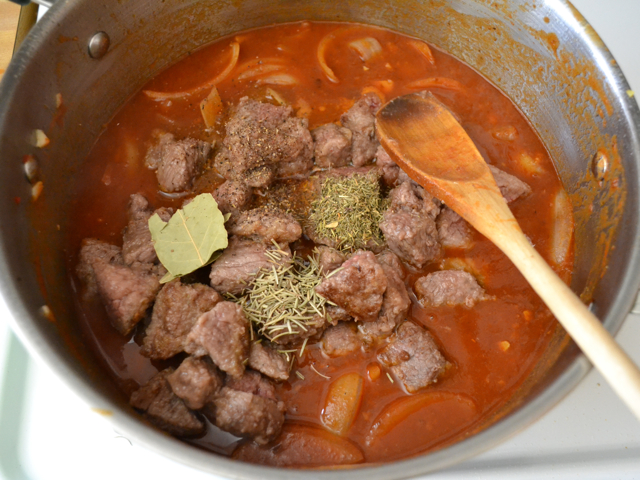 Once the browned bits have dissolved into the liquid, add the beef back into the pot, along with the bay leaf, thyme, rosemary, and a good bit of freshly cracked pepper. 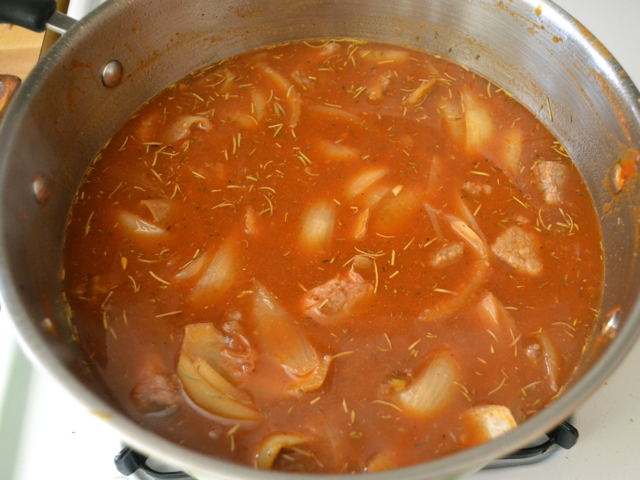 Stir it all together and make sure the beef is under the liquid. Place a lid on the pot and let it come up to a simmer. Let the pot simmer for 30 minutes. 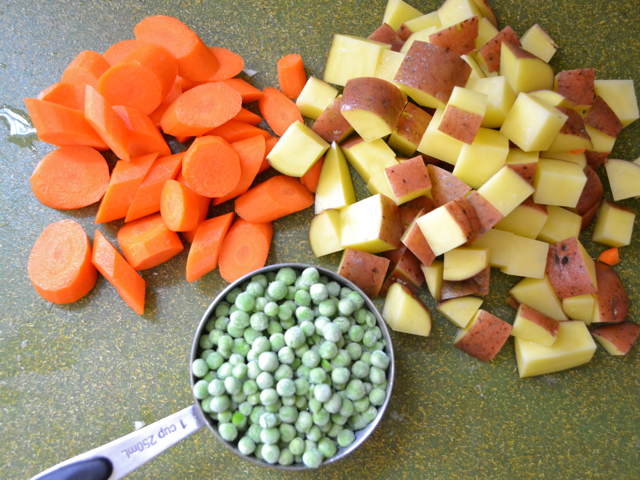 While it’s simmering, prepare the rest of the vegetables. I like to cut the carrots on a bias because it makes them pretty. You can peel the potatoes if you’d like, but I leave my peel on and just wash them well. Cut the potatoes into a small cube so that they’ll actually fit on a spoon. 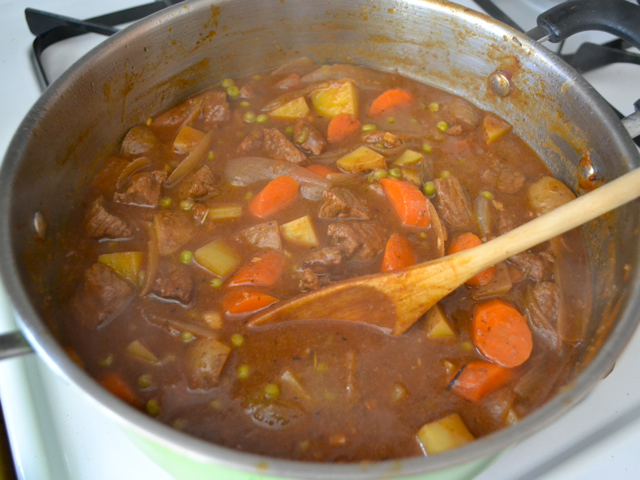 Once the pot has simmered for 30 minutes it will have also thickened. Stir in the vegetables, put the lid back on top, and let it simmer for another 15-20 minutes, or until the vegetables are tender. Add the worcestershire sauce and adjust the salt and pepper if needed. 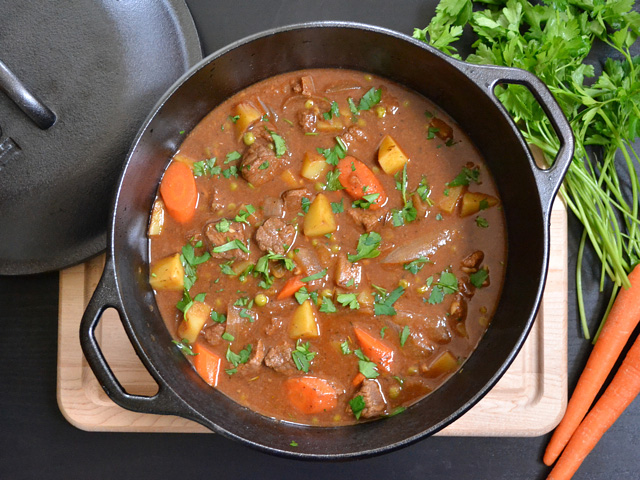 Sprinkle some chopped parsley over top if desired. Enjoy!