Are y’all ready for this? …No, no, I don’t think you are. Okay, if you insist. But if your head explodes upon contemplating the deliciousness of these Apple Spice Pork Chops, don’t say I didn’t try to warn you.

I don’t even know if I can describe how awesome these pork chops are. The brown sugar and butter create an amazing caramel-like sauce that drenches the pork chops in a deep, rich, sweetness. Add a little spice from the cinnamon, nutmeg and black pepper and you’ve got a carnival in your mouth. Pork heaven. 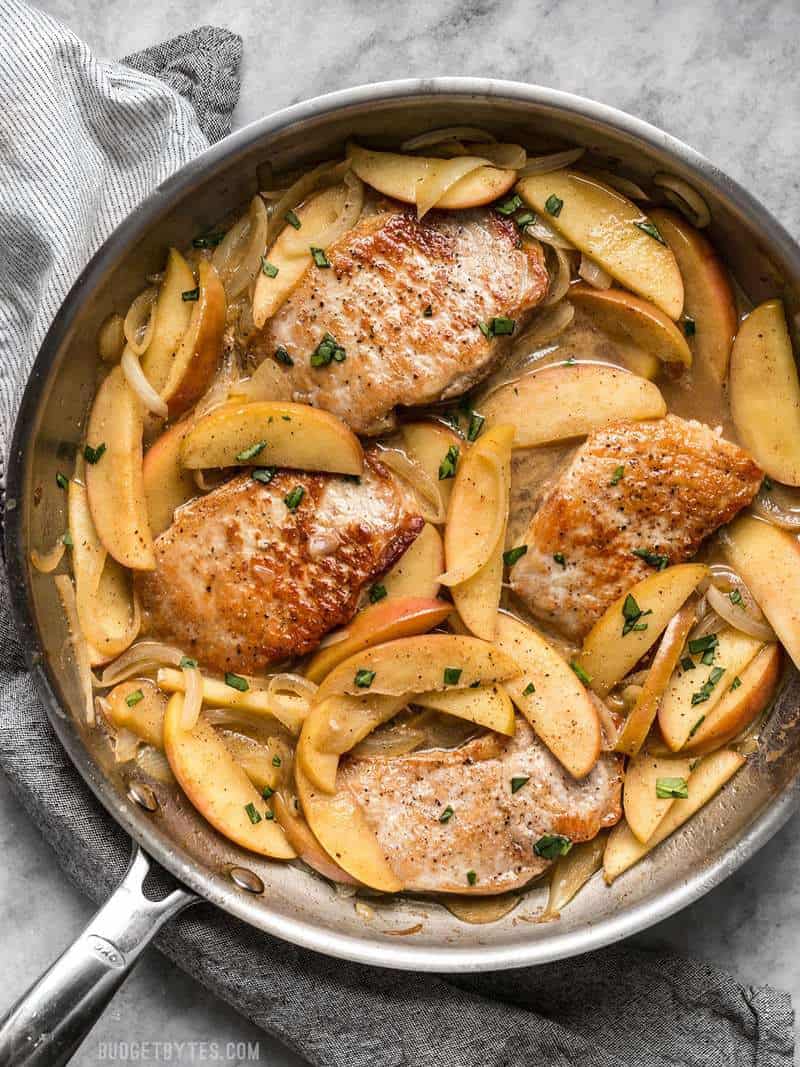 Since these Apple Spice Pork Chops simmer in the delicious sauce there is not even a fraction of a possibility that chops will turn into dry hockey pucks. No, they’re juicy, rich, sweet and savory all at one time. *mouth watering as I type*

What Type of Pork Chops and Apples Should I Use?

A couple of notes: I used boneless, center cut, thick chops but you can use bone-in as well. Just do not use thin cut pork chops because they will likely cook too quickly and become overcooked, dry, and tough. Shoot for something 3/4-1 inch thick. I used fuji apples for this recipe because I wanted something that was halfway between sweet and tart. I would suggest using any variety that is sweet but not sickeningly so. You need a little “acid” in there. 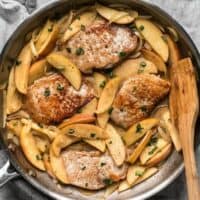 See how we calculate recipe costs here.
Tried this recipe?Mention @budgetbytes or tag #budgetbytes on Instagram!
Nutritional values are estimates only. See our full nutrition disclosure here. The equipment section above contains affiliate links to products we use and love. As an Amazon Associate I earn from qualifying purchases. 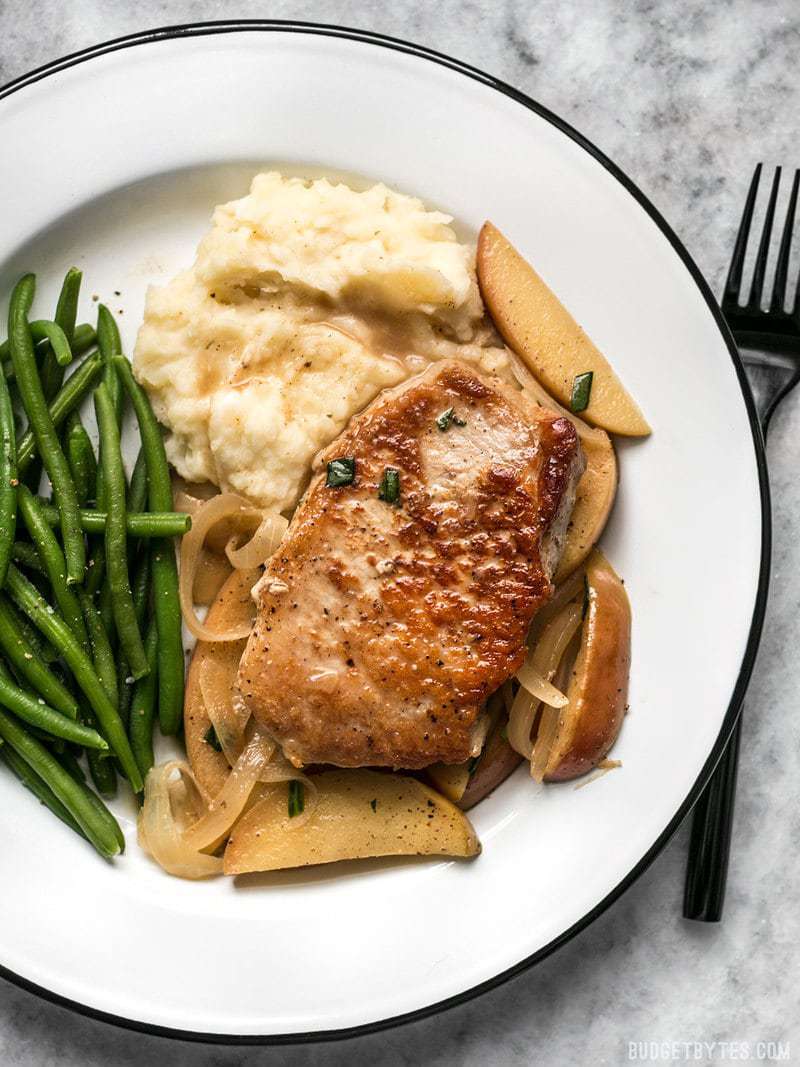 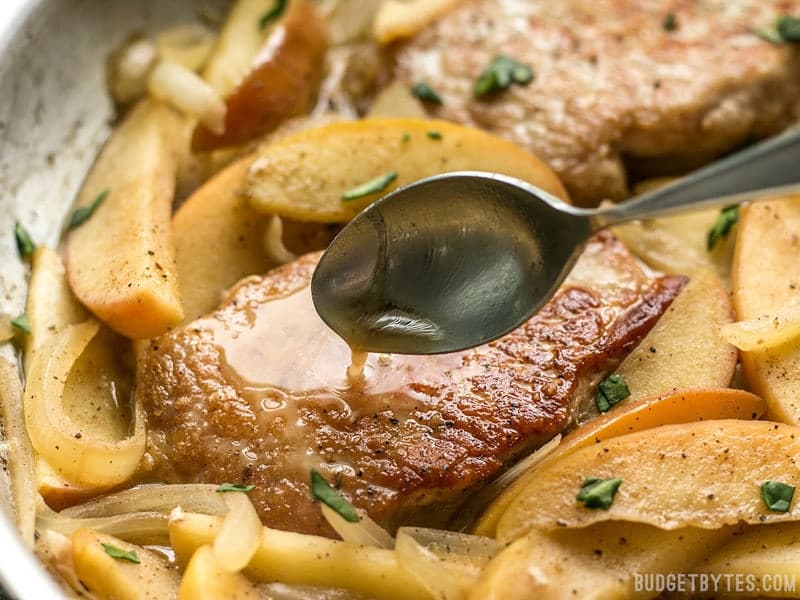 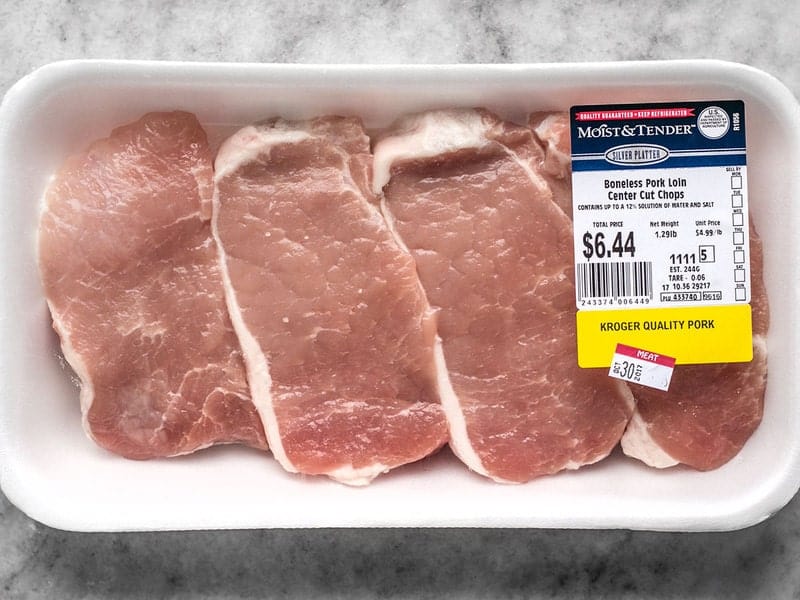 Season both sides of four pork chops with a pinch of salt and pepper. I used boneless, but you can use bone-in, if you prefer. 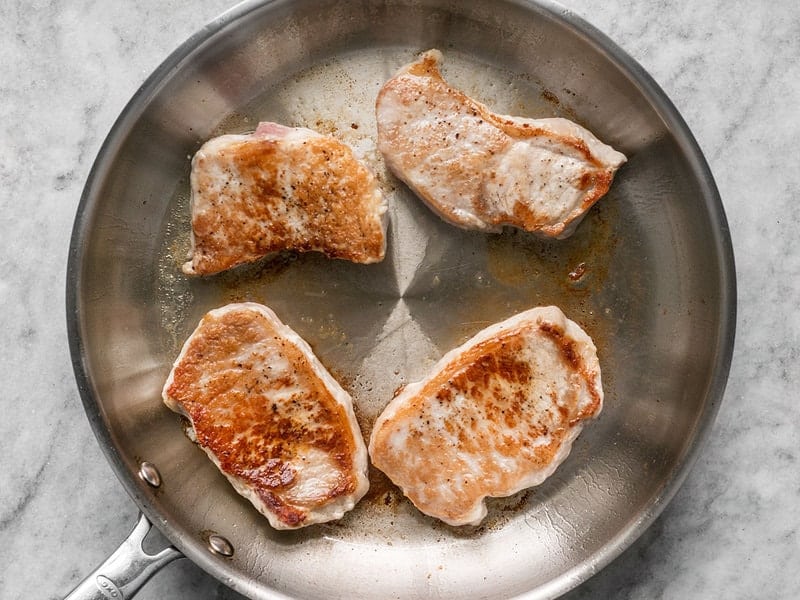 Heat a large skillet over medium, then once hot add 2 Tbsp vegetable oil. Swirl the skillet to coat the surface in oil, then add the pork chops. Let them cook until browned on one side (about 5-7 minutes), then flip and cook until browned on the second side. It’s important not to move them around while they are browning. They may stick to the skillet a little at first, but they will release when they develop that nice brown crust. Once browned on both sides, remove the chops to a clean plate. They do not need to be fully cooked through at this point. 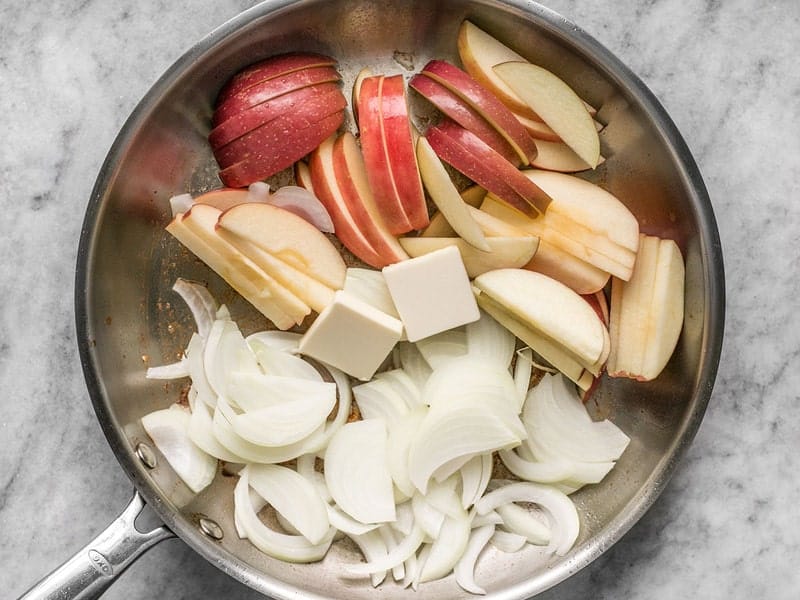 While the pork chops are cooking, thinly slice one yellow onion and slice two apples into thin wedges. After removing the pork chops from the skillet, add the apples, onions, and 2 Tbsp butter. 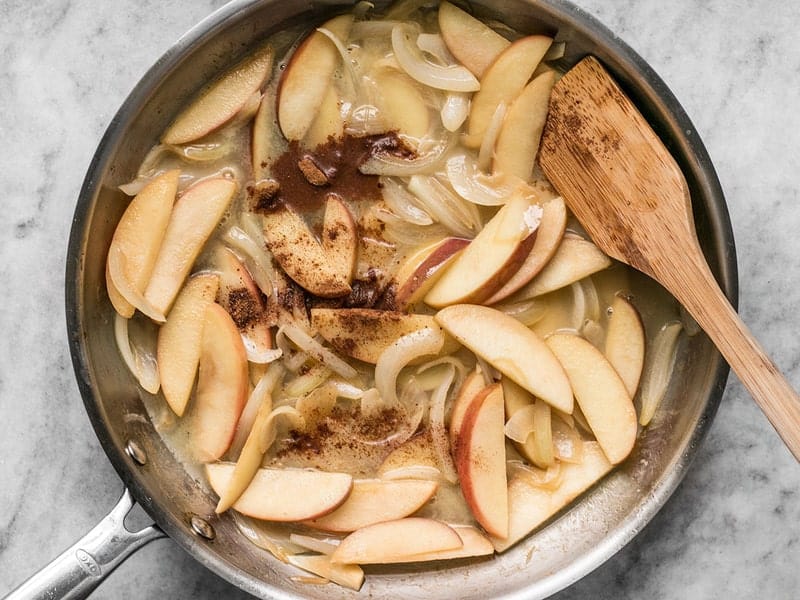 Once the onions have softened, add 1 cup chicken broth, 1 Tbsp brown sugar, 1/4 tsp cinnamon, and 1/8 tsp nutmeg. Stir everything together until combined. 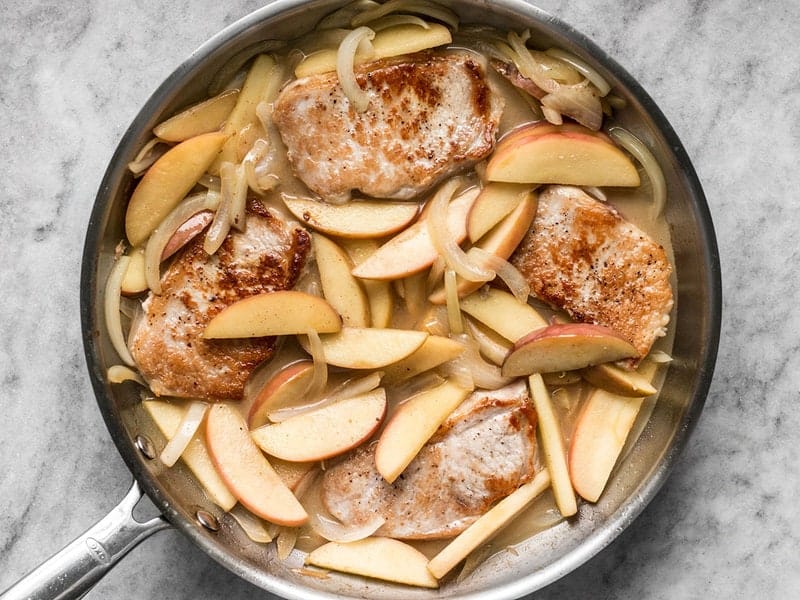 Return the pork chops back to the skillet, along with any juices that collected on the plate, and nestle them down into all of that goodness. Allow the broth to come up to a strong simmer, then let the chops simmer in the liquid for about 10 minutes, or until the liquid is slightly thickened and the apples are soft. 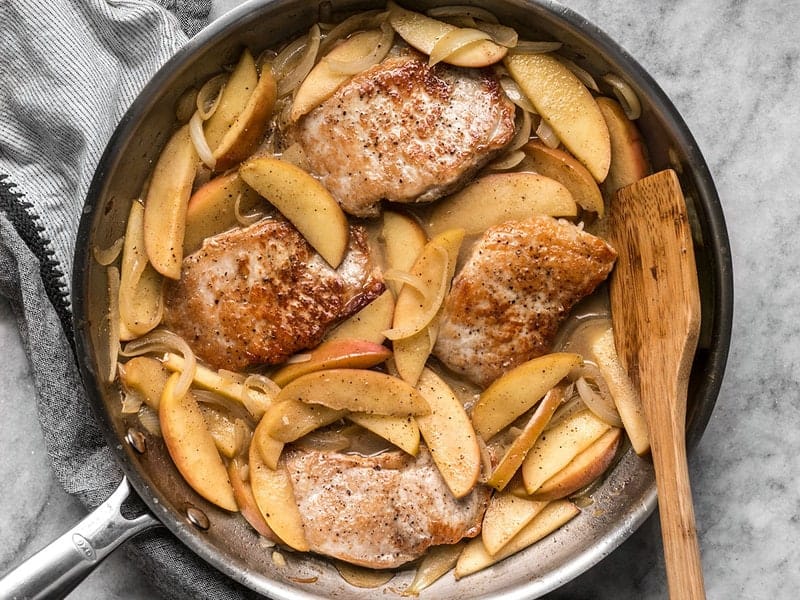 The pork chops should be cooked through, the apples tender, and the pan sauce should be absolutely SCRUMPTIOUS. 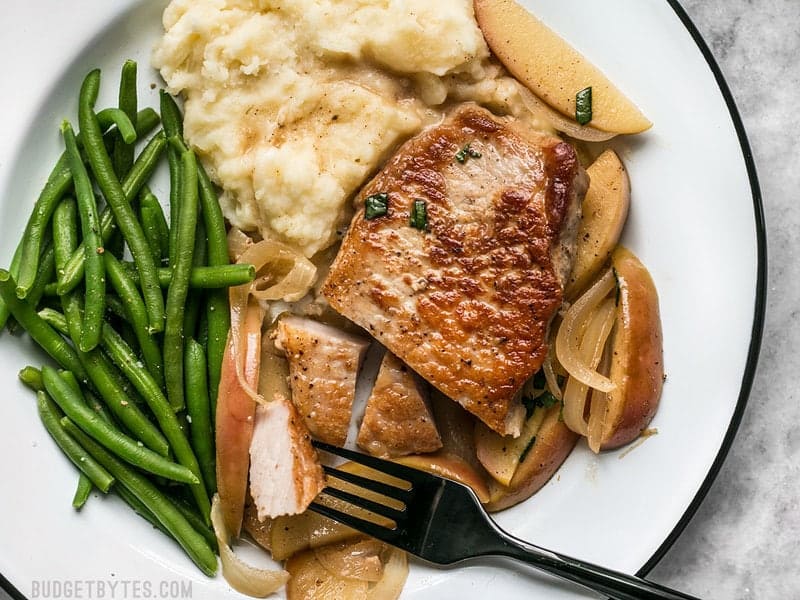 Make sure you serve your Apple Spice Pork Chops with plenty of the apples and onions from the skillet, plus a couple spoonfuls of that amazing sauce! 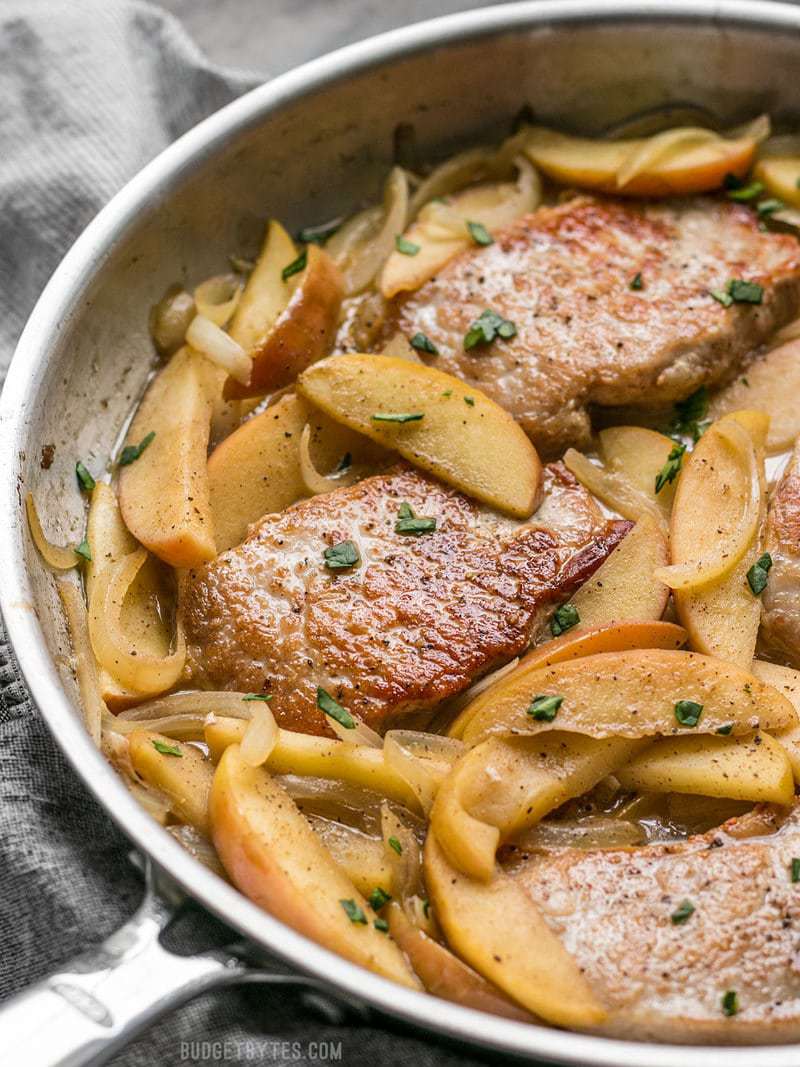